In ischemic stroke patients, a higher monocyte count is associated with disease severity and worse prognosis. The complex correlation between subset phenotypes and functions underscores the importance of clarifying the role of monocyte subpopulations. We examined the subtype-specific distribution of the CD163+ and CD80+ circulating monocytes and evaluated their association with the inflammatory status in 26 ischemic stroke patients and 16 healthy controls.

The pathobiology of an ischemic stroke is influenced by the activation of immune responses occurring both locally in the brain and in the peripheral circulation. Accordingly, evidence from animal models and patients highlights that ischemic insult results in rapid activation of local microglia, followed by stimulation and cerebral recruitment of circulating monocytes that differentiate into macrophages or dendritic cells, influencing the progression of ischemic damage [1][2][3][4]. Thus, monocytes modulate the immune response by polarizing toward diverse phenotypes that display tangled, often paradoxical, and still poorly characterized functions. Human monocytes can be classified according to their relative expression of the surface molecules CD14 (lipopolysaccharide receptor complex component) and CD16 (FCγRIII immunoglobulin receptor): 80–90% of circulating monocytes, referred to as “classical” monocytes, express high levels of CD14 but no CD16; meanwhile, the population expressing CD16 includes “intermediate” monocytes (expressing high levels of CD14) and “nonclassical” monocytes characterized by low CD14 expression [5][6][7]. Although recent work has delineated diverse phenotypes, their specific inflammatory role has not been clarified, whereby redundant functions or contradictory findings have been reported in different inflammatory conditions [8][9][10]. Several studies suggest that the disease stage and some risk factors can differentially affect specific monocyte subsets; therefore, these cells may be a biomarker predictive of outcomes. In the context of ischemic stroke, a higher monocyte count is associated with disease severity and adverse prognosis [11][12][13]. The few studies performed to date have revealed that the more abundant (CD14+) classical monocyte subset triggers detrimental effects; on the contrary, the less-represented (CD16+) populations may exert beneficial functions [14][15]. This is consistent with the concept that classical monocytes promote damage by producing inflammatory cytokines (i.e., TNF-alpha, IL-1beta, and IL-6) [16], with evidence that their elevation in the blood of acute stroke patients is independently associated with poor outcomes [17][18]. Conversely, CD16+ intermediate and nonclassical monocytes have been reported to be inversely related to poor functional and histological outcomes and to mortality, respectively [18]. In a recent clinical study, we reported a significant elevation of the percentage of CD14++/CD16+ intermediate and CD14+/CD16+ non-classical monocyte subsets, as well as their relative expression of the cannabinoid receptor-2 (CB2), 24 and 48 h after stroke. By contrast, the percentage of CD14++/CD16– events (corresponding to classical monocyte subtype) was not affected [19]. Interestingly, we also found that the increase in CB2 protein expression in CD16+ monocytes positively correlated with stroke severity, likely representing a compensatory response to limit damage if considering their anti-inflammatory and pro-angiogenic functions [20][21].
Elevated CD14++/CD16− monocytes predict cardiovascular events, whereas the percentage of monocytes expressing CD16 is negatively associated with carotid artery intima-media thickness at baseline [22]. However, there is an overlap between these specific subsets when they are defined just by CD14+/CD16+ expression; thus, a clear discrimination and, accordingly, characterization of these subsets is challenging. Moreover, different monocyte subsets seem to have distinct biological functions depending on the clinical or inflammatory context. For instance, CD14++/CD16− monocytes might cause inflammation that damages the fibrous cap of atherosclerotic plaques and might thus be associated with an increased risk of clinical events; CD16-expressing monocytes might play a role in determining the plaque size, possibly even having a protective or reparative rather than plaque-promoting function [22]. Recent studies have shown a substantial heterogeneity of immune infiltrates, raising a key question regarding the functional role of each cellular phenotype recruited to the ischemic brain.
Several biomarkers are associated with the M1/M2 profiles of human monocytes [23][24]. CD80 (B7-1), a costimulatory signal for T cell activation and survival, is mainly expressed on M1 macrophages. By contrast, CD163, the high-affinity scavenger receptor for the hemoglobin–haptoglobin complex, is selectively expressed on M2 monocytes/macrophages, where it participates in clearance of hemoglobin/haptoglobin complexes and tissue protection from oxidative damage [25]. Many anti-inflammatory signals upregulate CD163, while pro-inflammatory signals downregulate its expression [24][26]. Starting from 5–6 days after a stroke in humans, CD163+ cells accumulate in the ischemic brain parenchyma, where they may also paradoxically acquire a pro-inflammatory phenotype [27], as also noted in other pathological contexts [28][29][30]. This highlights the complexity of the correlation between subset phenotypes and functions, underscoring the importance of clarifying the role of specific monocyte subpopulations, beyond the surface expression of CD14 and CD16. In fact, immunomodulatory approaches aimed at targeting specific cell populations represent potential effective treatments for stroke and would significantly benefit from a better understanding of the molecular events underlying stroke-induced inflammation [31]. The occurrence of distinct monocyte subsets has not been fully investigated in ischemic stroke patients, even though monocytes (as well as macrophages) have been recognized as important players of the inflammatory response. 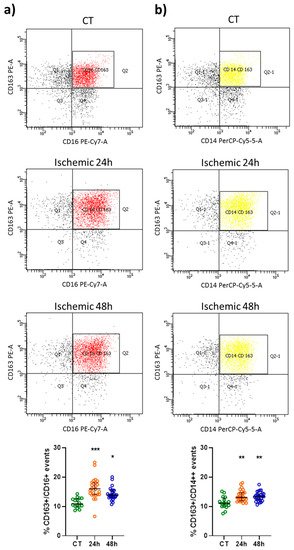 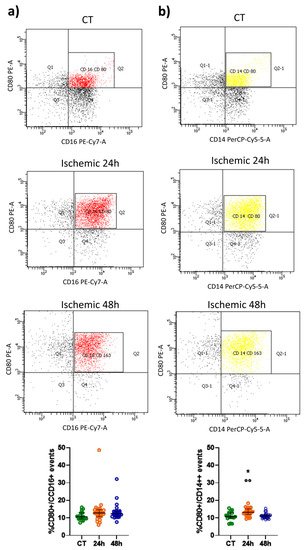 Increased IL-1beta, TNF-alpha, and IL-4 mRNA levels were observed in the total monocytes from ischemic stroke patients at either 24 or 48 h after the insult, compared to CT, with no significant difference between the two time points (Figure 3). By contrast, a significant decrease in IL-10 gene expression was found 24 and 48 h after an ischemic stroke compared to CT subjects. 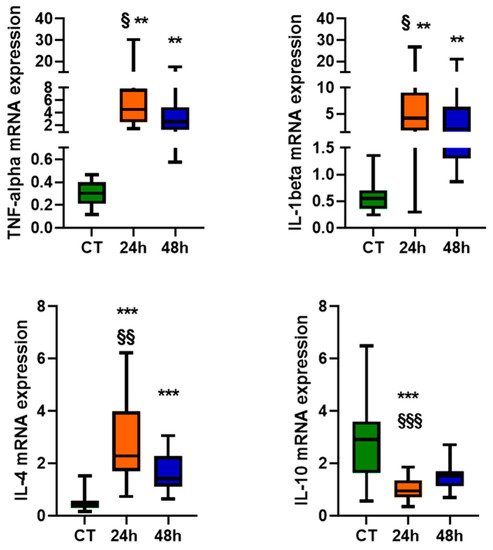 4. Correlation between the Percentage CD163+/CD16+ Events and Stroke Severity

The percentage of CD163+/CD16+ events 24 h after an ischemic stroke was positively associated with the National Institute of Health Stroke Scale (NIHSS) score (Figure 4a; r  =  0.39, p  =  0.05) and the modified Rankin Scale (mRS) at admission (Figure 4b; r  =  0.39, p  =  0.047), suggesting that stroke severity and disability are relevant triggers for the expression of CD163+ on circulating CD16+ monocytes. No significant correlation was reported between CD80+ subsets and stroke severity/disability (data not shown).