The P2X7R and Diabetic Retinopathy

Diabetes is a worldwide emergency. Its chronic complications impose a heavy burden on patients, health systems, and on society as a whole. Diabetic retinopathy is one of the most common and serious complications of diabetes, and an established risk factor for blindness in adults. Over 15 years of investigation led to the identification of vascular endothelial growth factor (VEGF) as a main pathogenic factor in diabetic retinopathy and to the introduction of highly effective anti-VEGF-based therapies, such as the monoclonal antibody bevacizumab or its fragment ranibizumab, which helped to prevent diabetes-related blindness in millions of patients. Recently, a pathogenic role for uncontrolled increases in the extracellular ATP concentration (eATP) and for overactivation of the purinergic receptor P2X7 (P2X7R) has been suggested. The P2X7R is an eATP-gated plasma membrane channel expressed in multiple tissues and organs, with a pleiotropic function in inflammation, immunity, cancer, and hormone and growth factor release. P2X7R stimulation or overexpression positively regulate the secretion and buildup of VEGF, thus promoting neo-angiogenesis in a wide variety of disease processes.

It is estimated that over 400 million people are currently affected by diabetes mellitus worldwide, with the incidence steadily increasing year by year. Chronic complications of diabetes are of great concern for patients, doctors, and society as a whole, even from an economic and global health perspective. Diabetic retinopathy is one of the most common and serious complications of diabetes, and a highly impactful risk factor for blindness in adults. The pathogenic role of VEGF in diabetic retinopathy is well established. In fact, uncontrolled growth of blood vessels stimulated by VEGF underlies many pathological processes, diabetic retinopathy included. This body of knowledge, accumulated over more than 15 years of pre-clinical and clinical investigation, finally led to the introduction in the clinic of nowadays consolidated treatments based on anti-VEGF monoclonal antibodies or fragments thereof, such as bevacizumab or ranibizumab, respectively, which helped to prevent diabetes-related blindness in millions of patients. Recently, a strong link has been highlighted between VEGF-dependent neo-angiogenesis and the P2X7 purinergic receptor (P2X7R). The P2X7R is a member of the P2XR family of ATP-gated plasma membrane receptors expressed in multiple cell types and tissues, with a pleiotropic function in the regulation of inflammation, immunity, and hormone and growth factors release. P2X7R stimulation or overexpression trigger secretion of VEGF and promote angiogenesis in a variety of pathophysiological conditions, cancer and diabetic retinopathy included. This has prompted studies aimed at testing the potential therapeutic applications of P2X7R targeting to prevent pathological angiogenesis. Preclinical data in selected degenerative retinopathies, and specifically in diabetes-associated retinal degeneration, are very encouraging.

2. Role of the P2X7R in Diabetic Retinopathy and Its Potential Role as a Therapeutic Target

2.1. The P2X7 Receptor as a Target to Restore the Blood–Retinal Barrier and Reduce Inflammation

Many cell components of the retina, retinal pigmented epithelium, and possibly neuronal cells express the P2X7R, and accordingly, several retinal functions are either affected by pharmacological P2X7R blockade or impaired by genetic P2X7R deletion [1]. Converging evidence supports a role for the P2X7R in the breakdown of the blood–retinal barrier (BRB), in pericyte dysfunction, and in retinal neuronal damage in diabetes [2]. The BRB is a well-known defensive structure made of endothelial cells, microglia, astrocytes, and pericytes that protects the retina against high glucose-induced damage. The integrity of the BRB is maintained by the concerted action of several components, among which tight junctions play a fundamental role. Increased levels of VEGF-A mainly secreted by astrocytes might impair the BRB integrity by targeting claudin-5 and zonula occludens-1 (ZO-1), the two main tight junction isoforms in the retina [3]. Loss of pericytes is an early finding in diabetic retinopathy, and a factor that dramatically alters BRB permeability. Several components of the BRB may benefit by P2X7R targeting. Platania and co-workers showed that P2X7R allosteric inhibitors abrogated the in vitro damaging effects of high glucose in human retinal pericytes and prevented the acquisition of an inflammatory phenotype. This was one of the first reports demonstrating that IL-1β release from retinal pericytes exposed to high glucose is a P2X7R-dependent process, thus suggesting a novel potential pharmacological target for the treatment of diabetic retinopathy [4]. Overexpression of IL-1β and TNF-α in retinal microglia and macrophages, and of CD40 ligand, a member of the TNF-α superfamily, in Müller cells, endothelial cell, and microglia is an early feature of diabetic retinopathy and the main factor responsible for retinal inflammation in experimental models of diabetic retinopathy [5]. CD40-activated Müller cells secrete eATP via a phospholipase Cγ (PLCγ)-mediated mechanism and trigger P2X7R-mediated cytokine release from monocytes/macrophages [6]. Blood levels of the CD154 cofactor and expression of CD40 in Müller glia and P2X7R in the retinal endothelial cells and microglia/macrophages are increased in diabetes, increasing the pathogenic effect of the CD40-ATP-P2X7R axis in these patients [7] (Figure 1). 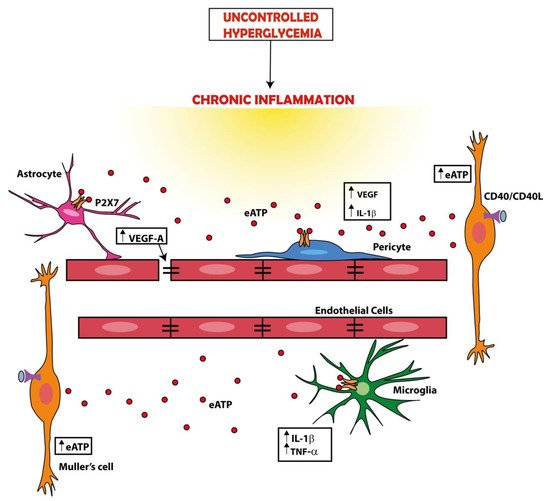 Figure 1. A dysregulation of the ATP-P2X7R axis is a main factor in the pathogenesis of diabetic retinopathy. Hyperglycemia is a cause of chronic inflammation, tissue damage, and cytokine (e.g., IL-1β or TNF-α) release. These events promote ATP release. For example, ATP release can be promoted by ligation of CD40 by CD40L on the plasma membrane of Müller cells or by the activation of the P2X7R itself. The increase in the extracellular ATP (eATP) concentration amplifies inflammation by activating the P2X7R expressed in the retina by several cell types (e.g., Müller cells, astrocytes, microglia, and pericytes), thus causing further release of cytokines and vascular endothelial growth factor (VEGF). VEGF in turn causes a breakdown of the blood–retinal barrier (BRB) promoting the formation of inflammatory exudate and inflammatory cell migration form circulation.
The hypothesis that high glucose levels found in diabetes increase the susceptibility to injury of retinal blood vessels via a P2X7R-mediated mechanism is supported by studies showing that even low concentrations of P2X7R agonists, usually unable to trigger cell death in the healthy retina, caused macropore formation and apoptosis in the diabetic retina [3][8][9]. In an experimental model of diabetic retinopathy in which human retinal endothelial cells were exposed to high glucose and to the synthetic P2X7R agonist BzATP, administration of the P2X7R selective antagonist JNJ47965567 rescued the main physiological markers of a healthy BRB, i.e., claudin-5 and ZO-1, and restored the trans-endothelial electrical resistance (TEER) [10]. Similarly, a natural P2X7R diterpenoid inhibitor named dihydrotanshinone (DHTS) showed a protective effect on BRB structure, very much akin to the JNJ47965567 compound [11]. In this same study, administration of DHTS prior to exposure to high glucose and BzATP prevented overexpression of both P2X7R and VEGF-A, with a strongest effect on the latter, as well as of ROS and other factors involved in the pathogenesis of diabetic retinopathy, such as ICAM-1.

Another therapeutically promising pathway was hinted at by the identification of the P2X7R as an upstream modulator of the PI3K/Akt pathway in different cell types, endowed with the ability to reorganize metabolic pathways in unfavorable external conditions [12][13]. An interesting finding that might open new avenues for the treatment of diabetic retinopathy is the observation that P2X7R stimulation also caused an increase in the HIF-α expression and VEGF secretion, which were both largely reduced by the in vivo administration of the P2X7R selective antagonists A740003 and AZ10606120. Of interest, neo angiogenesis was also inhibited, reinforcing the concept already established in tumors where cell growth and neoangiogenesis in P2X7R-expressing tumors can be inhibited by targeting VEGF and/or the P2X7R [12][14]. These early findings suggest that P2X7R targeting might be an efficient avenue to inhibit VEGF release. These anticipations were confirmed by a study investigating the effect of P2X7R targeting in a model of streptozotocin-induced hyperglycemic retinopathy in rats [15]. In this model, characterized by increased expression of the P2X7R in the retina, administration of two different P2X7R antagonists, A740003 or AZ10606120, completely reverted the increased vessel permeability and reduced VEGF and IL-6 release. Interestingly, P2X7R blockade had no effects on protein leakage in the absence of streptozotocin treatment, suggesting lack of interference with the physiological regulation of vessel permeability.

Given the expression of the P2X7R by neuronal cells in the retina, it is also conceivable that the increased levels of eATP thought to be present in the retina of diabetic patients might contribute to visual impairment by injuring P2X7R-expressing neurons, though this mechanism is as yet purely speculative because no direct measurements of eATP have ever been performed in the retina [15]. This notwithstanding, previous observations in a model of experimental glaucoma shows that degrading eATP or blocking P2X receptors prevented pressure-induced RGC damage [16]. In human organotypic retinal cultures, it was also demonstrated that the activation of the P2X7R can kill RGCs [17], a pathway that might be relevant in neuronal damage under ischemic conditions as well as in diabetic retinopathy, conditions both thought to be characterized by increased levels of eATP. One of the main pathways for non-lytic eATP release, i.e., pannexin-1 (Panx-1), might also be involved. A recent study showed that retinal ganglion cells from Panx-1-deficient animals exposed to ischemia undergo lower increase in plasma membrane permeability and reduced activation of the NLRP3 inflammasome, and are, therefore, resistant to the ischemic insult [18]. Therefore, an additional pathogenic mechanism promoted by neuro-inflammation in diabetic retinopathy might be P2X7R-activated, Panx-1-dependent RGC injury [18]. Injury- or inflammation-induced eATP release might then trigger a self-amplifying loop that will further extend neuronal damage in the retina. The pathogenic role of the P2X7R-NLRP3 inflammasome axis extends well beyond diabetic retinopathy to as of yet intractable retinal diseases such as geographical atrophy in age-related macular degeneration (AMD) [19].
An investigation of an experimental model of AMD revealed that nucleoside reverse transcriptase inhibitors (NRTIs), such as stavudine and azidothymidine, are potent blockers of P2X7R and of the associated NLRP3 inflammasome activation, and accordingly, they prevent geographic atrophy and choroidal neovascularization [19]. Recently, another NRTIs, i.e., lamivudine, was shown to inhibit the P2X7R and prevent diabetic retinopathy, thus reinforcing the role of the P2X7R and NLRP3 in its pathogenesis [20].

2.4. Other Potential Roles of the P2X7 Receptor as a Therapeutic Target in Diabetic Retinopathy

Chronic hyperglycemia causes the accumulation of pro-inflammatory advanced glycosylated end-products (AGE) in the retina. The P2X7R-NLRP3 axis is also activated under these conditions in human retinal microvascular endothelial cells (hRMEC). The administration of relaxins, a family of anti-inflammatory, anti-apoptotic, and anti-fibrotic compounds belonging to the insulin super-family, displayed reduced hyperglycemia-induced damage in the eye and other tissues [21]. A synthetic form of relaxin-3 named H3 showed a protective effect in a rat model of diabetic retinopathy and in hRMEC exposed to high glucose via a P2X7R-NLRP3-mediated mechanism. The synthetic compound MCC950, a sulfonylurea analog, also inhibited AGE-induced retinal damage, suppressed apoptosis, and normalized hRMECs migration. Combined application of H3 relaxin and MCC950 did not produce a synergistic effect, suggesting that the inhibitory activity occurred via a shared pathway, i.e., the P2X7R-NLRP3 axis [21]. As a further therapeutical approach, we may consider to exploit the reported inhibition of the P2X7R by the well-known anti-inflammatory agent colchicine [22]. Colchicine, a microtubule depolarizing drug with a potent anti-inflammatory activity, currently used to treat acute gout flares, familial Mediterranean fever (FMF), and acute pericarditis, disrupts the microtubule network and at the same time inhibits eATP-induced, P2X7R-dependent plasma membrane permeabilization to high MW dyes, ROS, nitric oxide (NO), and IL-1β release, without affecting ATP-evoked ion currents [22]. Thus, colchicine might be an additional low cost and widely available therapeutical option for the treatment of diabetic retinopathy.