Admixed populations arise when two or more ancestral populations interbreed. As a result of this admixture, the genome of admixed populations is defined by tracts of variable size inherited from these parental groups and has particular genetic features that provide valuable information about their demographic history. Diverse methods can be used to derive the ancestry apportionment of admixed individuals, and such inferences can be leveraged for the discovery of genetic loci associated with diseases and traits, therefore having important biomedical implications.

Admixed populations are the result of gene flow between reproductively isolated groups, owing to events that have occurred throughout human history, including migratory events, the discovery of new territories, or the slave trade. As a result of the intermixture and recombination, over time, the genomes of individuals in the hybrid population will contain a mosaic of ancestries from different population sources in their chromosomes. The length of the chromosome segments inherited from the different ancestral populations will be proportional to the time elapsed since the admixture event. These tracts shorten over the generations by the meiotic recombination process, so that the most recently admixed populations, such as the Canary Islanders in Spain or the Latino populations, would retain longer ancestral tracts, while the populations that mixed more distantly in time, such as the Uyghur in China, would harbor shorter ancestry segments in their chromosomes [1][2].

As such, the admixture proportions and the elapsed time since the admixture event can be inferred based on linkage disequilibrium (LD) [3][4]. When two distant populations interbreed, the admixture linkage disequilibrium (ALD) can be generated among loci with different allelic frequencies in the ancestral populations, leading to a linkage between markers that were previously unlinked. During the first generations since the admixture, ALD is expected to experience a rapid decay between distant loci, while it would be maintained between closer positions and can be detected after generations [5]. Additionally, the ALD dynamics of decay are also influenced by the admixture model. For example, a greater drop of ALD and a faster length decrease in the ancestral chromosomal segments are expected for those populations that have been formed by a single mixing event, compared with admixtures maintained throughout generations [1][6].

Global ancestry (GA) is the fraction of genomic ancestry from each admixed individual that can be ascribed to each of the ancestral populations contributing to the recently admixed population (Figure 1A). The estimate of GA can be obtained using different approaches. Some of the most popular methods are based on probabilistic models using genotype data, assuming that populations are in Hardy–Weinberg equilibrium and considering complete linkage equilibrium for all loci considered for the estimation, such as STRUCTURE [7][8] and ADMIXTURE [9][10]. Alternative approaches that allow the estimation of the ancestry proportions are based on principal component decompositions, such as ipPCA [11], and on the study of LD decay curves, such as ALDER [3]. 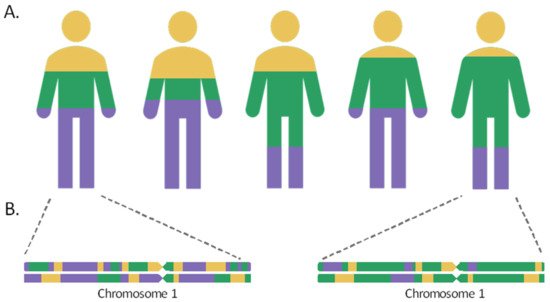 Figure 1. Global (A) and local (B) genetic ancestries in a recently admixed population with three ancestral populations. The proportion of each of the ancestral populations is represented by the colors yellow, blue, and purple.
Local ancestry (LA) is a term commonly used to refer to the ancestry in each of the chromosome blocks, also known as ancestral tracks, in recently admixed individuals (Figure 1B). For this, the number of copies derived of each ancestral population, in each genomic position, could be inferred per individual (from zero to two copies). Thus, GA can also be obtained by summarizing LA across the individual genomes. Multiple estimators have been developed to infer LA (Table 1).
Table 1. Most common methods to estimate local genetic ancestry.
a Phased and unphased data are allowed for ancestral and admixed populations. b Phased data are needed for the ancestral populations and unphased data for the admixed population. CRF (Conditional Random Field), HMM (Hidden Markov Model), LD (linkage disequilibrium), PCA (Principal Component Analysis), SVM (Support Vector Machines).
The use of genotyping microarrays has also led to the development of improved methods to infer LA, such as LAMP-LD [16], RFMix [19], and HAPMIX [15], among others (Table 1). Compared to the previous methods that were designed to deal with AIMs, these other algorithms rely on denser sets of genetic markers (retaining LD) that allow one to obtain a higher resolution in estimating LA, most of them based on hidden Markov models [14][16].
In order to identify the optimal approach for each scenario, benchmarking the different algorithms and reference panels is necessary. Previous reviews have compared the characteristics and effectiveness of local ancestry estimators [24][25][26][27][28], suggesting a few main aspects to consider: (1) the prior requirements of each estimator, and (2) the inherent features of the target population itself. Table 1 shows the main characteristics of the most common methods to estimate local ancestry.
Regarding the necessary requirements for the use of each estimator, it must be considered, for example, whether a phasing step is needed prior to ancestry estimation. This step is crucial for an accurate estimate of ancestry and is closely linked to the density of available markers [29].

The distribution of allelic frequencies in recently admixed populations is closely related to those frequencies found in their ancestral populations [30][31]. When these ancestral populations have marked differences in the susceptibility to a disease, admixture mapping studies, also known as mapping by admixture linkage disequilibrium (MALD) studies, can be performed to reveal genetic loci harboring variants underlying such differences between population groups [32]. Admixture mapping studies aim to correlate LA with a trait of interest in recently admixed populations in which ALD is still detectable, under the hypothesis that variants associated with increased disease risk will be found in chromosomal fragments inherited from one of the parental populations [33][34]. Thus, an increment (or decrease) in the proportion of the ancestry associated with the trait of interest will be expected in these chromosomal regions (Figure 2, Table 2). 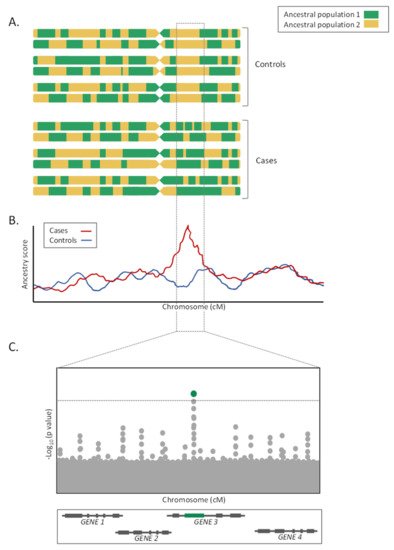 As a major advantage, given that LA tracks are usually large, often measured in the megabase-scale, the significance penalty of these studies is much lower than for GWAS, therefore increasing the statistical power for a given sample size [30]. Furthermore, these studies are less affected by allelic heterogeneity than GWAS, because they are based on LA and not on SNP alleles directly.

On the contrary, admixture mapping studies lose efficiency when allele frequencies are similarly distributed among ancestral populations and when the LD in the parental populations is unknown [35][36]. Furthermore, for the LA estimations to be accurate, the choice of the LA estimator, as well as the number and density of genotyped markers, is critical [36]. Additionally, given the megabase size of the loci detected by the admixture mapping approaches, fine mapping studies or candidate gene association studies focused on the prioritized genomic regions must follow for the study to be fully completed (Figure 2C). Finally, as in the GWAS, admixture mapping approaches only allow the detection of the genetic risks associated with the trait of interest, and do not consider the environmental, cultural, or socioeconomic factors [35].

Based on admixed populations, several studies have implemented admixture mapping approaches to reveal novel risk factors associated with complex diseases, including cancer, hypertension, and autoimmune, respiratory, and infectious diseases. Primarily, these studies have been widely applied in African Americans and Hispanic/Latino populations. The genetic contribution of each of the parental populations has been estimated for African Americans from four different states, providing an estimate of average ancestry corresponding to 76.4% African, 20.9% European, and 2.7% Native American [37]. A similar approach was carried out in the Hispanic population of Southern Colorado, for whom the composition was reported to correspond to 62.7% European, 34.1% Native American, and 3.2% African [38]. However, these estimates differ widely between the states [39]. In this sense, recent studies in African American populations have found genomic regions with increased proportions of African ancestry associated with risk of prostate and breast cancer [40][41][42].

The technological development of NGS over the years, together with the reduction in the sequencing costs, offers a great opportunity for genetic ancestry studies to develop further. Among the major advantages of this technology compared to microarrays (Table 3) is its high-throughput capacity, resulting in thousands of DNA fragments being sequenced simultaneously, offering the possibility of covering a larger fraction of the genome. Therefore, the use of NGS, especially of whole-genome sequencing (WGS), allows an increase in the number of markers tested to infer LA, and the possibility to find optimal ancestry-specific genetic markers. This permits one to obtain reference panels of ancestral populations and then design panels of more restricted AIMs, as done by Li-Ju Wang and colleagues, who proposed a specific panel of AIMs to infer three-way genetic admixture (European, East Asian, and African) by using whole-exome sequencing (WES) data [43]. Furthermore, the NGS technology allows the detection of information from the entire spectrum of allelic frequencies, from common variants to low-frequency and rare variants, which, by definition, are expected to be more structured among populations compared to the common variation that is typically covered by most SNP genotyping microarrays. This leads to better detection of population-specific variants and, therefore, improved LA estimation [44]. Additionally, another advantage offered by the NGS is that detected SNPs are not affected by ascertainment bias, which is induced by an incorrect or nonrepresentative selection of markers. In this sense, Maróti and colleagues assessed the used of WGS, WES, and SNP genotyping microarray data in population genetic analyses [45]. Their results suggested that SNP genotyping data may be more prone to biasing the results, as they are related to significantly higher cross-validation error values and an overestimation of the admixture proportions than are WES or WGS data. Accordingly, Lachance and Tishkoff suggested that the use of biased markers from genotyping arrays may misestimate LD and overestimate population differences [46]. Since these aspects are important for LA inference and, consequently, for the proper performance of an admixture mapping study, we anticipate that the use of NGS will lead to more accurate estimates.

Genetic ancestry studies and admixture mapping approaches have expanded genetic knowledge in biomedical research, revealing new loci associated with traits and diseases that could not have been detected by conventional association studies. Despite this, the available genomic resources need to be improved to obtain more accurate ancestry inferences.

In summary, promoting genetic studies in admixed populations, and the use of admixture mapping studies, combined with the alternative approaches described, promise the identification of novel disease associations and a better understanding of complex trait genetics. Eventually, these results will translate into a more equitable representation of the catalogs of genetic variation across populations.