Pulmonary microvascular endothelial cells are a key constituent of the blood air barrier that has to be extremely thin (<1 µm) to allow for rapid and efficient alveolo-capillary gas exchange. Integrity of this barrier is mandatory to prevent airborne pathogens from entering the blood circulation and causing systemic infections and to avoid fluids such as plasma or blood entering the alveolar space. Yet, over the past years a considerable body of work has demonstrated that activation of Transient Receptor Potential (TRP) channels can disrupt endothelial barrier function via a Ca2+-dependent increase of endothelial permeability, resulting in the formation of lung edema and an inflammatory response characterized by immune cell infiltration [1][2][3][4]. TRP channels form a family of transmembrane cation-permeable channels that can be categorized into six subfamilies: TRPA (ankyrin), TRPC (canonical), TRPM (melastatin), TRPML (mucolipin), TRPP (polycystin) and TRPV (vanilloid) [5]. Members of all six TRP channel subfamilies are expressed in the lung endothelium [6][7][8][9] where they can mediate Ca2+ influx and signaling as a key second messenger regulating cellular adaptation in various physiological and pathophysiological scenarios including endothelial permeability, vasodilation, angiogenesis, thrombosis, and inflammation [3][10][11][12]. For example, TRPV1 has been demonstrated to initiate inflammatory responses in pulmonary endothelial cells [13] while TRPV4-mediated Ca2+ influx can cause gap formation between endothelial cells, promoting infiltration of immune cells such as monocytes and polymorphonuclear leukocytes (PMNs) into the alveolar space, as well as pulmonary edema formation and lung injury [14]. The subcellular mechanisms that determine why Ca2+ entry via different Ca2+ channels result in differential cellular responses are so far poorly understood, but likely relate to highly localized signaling effects in cellular sub-compartments [15].
To build a functional ion channel, TRP subunits have to assemble as a tetrameric structure [16][17]. Different TRP subunit assemblies differ in their specificities, ion conductances and activation mechanisms. For instance, a TRP channel consisting of four TRPV4 subunits reacts to arachidonic acid [18] and can be activated by a phosphorylation in Ser824 [19]. Interestingly, studies have shown that TRP channel subunits not only form homomeric, but also heteromeric structures [20][21], and that such heteromeric assembly determines channel ion conductance, e.g., for Ca2+. The stoichiometry of TRP heteromers influences the Ca2+ influx and is therefore important to investigate. For example, it has been found that heteromeric TRPV5/6 would have a reduced opening probability for Ca2+, if more TRPV6 subunits built the TRPV5/6 channel [17]. As Ca2+ is a key intracellular second messenger initiating stress responses, cytoskeletal reorganization, and junctional disassembly [20], TRP heteromers and their distinct Ca2+ gating can be expected to play a critical role in the regulation of endothelial permeability. Thus, it was found that heteromeric TRPC1/4 and TRPC3/6 could increase endothelial permeability [1][22].

TRP channel subunits are membrane proteins, consisting of six transmembrane spans and a pore loop between the fifth and the sixth span that is cation-permeable [23]. The intracellular N- and C-termini are fitted with specific sequence motifs that are essential for the multimeric assembly of TRP channels. The N-terminus contains several ankyrin repeat domains (ARDs) [24], consisting of short sequences of 33 amino acid residues that form an anti-parallel helix-turn-helix structure followed by a β-hairpin loop. Several of these helix-turn-helix structures are packed into a bundle. These bundles form in turn a hand-shaped structure [25][26]. The C-terminus of TRPC, TRPV and TRPM subtypes contain a so-called TRP box, which maintains the channel in a closed confirmation in a phosphatidylinositol 4,5-bisphosphate (PI(4,5)P2)-dependent manner [27][28] as shown in Figure 1 upon the example of TRPM8. 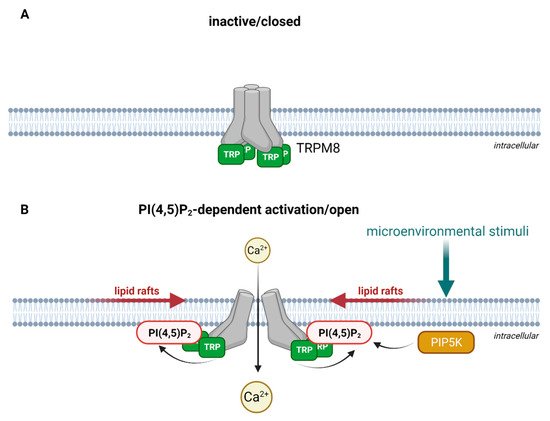 Figure 1. Schematic illustration of PI(4,5)P2-dependent activation as exemplified for TRPM8. (A) In the absence of PI(4,5)P2, the TRP-box holds the channel in a closed conformation. For simplification, other structural domains of TRPM8 are not illustrated. (B) Microenvironmental stimuli activate PI(4,5)P2 production via phosphorylation of phosphatidylinositol 4-phosphate by PIP5K (phosphatidylinositol-4-phosphate 5-kinase) in lipid rafts. The interaction of phosphatidylinositol 4,5-bisphosphate (PI(4,5)P2) the with the TRP-box activates TRPM8 and opens the channel for Ca2+ entry. Created with BioRender.com.
Additionally, coiled-coil domains (CCDs) consisting of seven α-helices that interact with each other have been reported in TRP channels [29][30] with the potential to build coiled-coil structures [31]. CCDs have been also described to be differentially localized to C- and N-termini depending on the individual TRP subfamily and to promote multimeric assembly, channel maturation and trafficking [30]. For instance, the TRPM subfamily and TRPA1 contain CCDs on their C-terminus [32][33] whereas TRPC1 and TRPC4 have their CCDs on the N-terminus [34].

Heteromeric assemblies of TRP channel subunits are known to be formed within their subfamily and moreover with TRP channel subunits from other subfamilies, as it has been demonstrated for heteromeric assemblies of TRPP2/C1 in pig kidney epithelial cells [21], or TRPC1/V6 and TRPML/V5 in HEK293 cells [35][36]. Heteromerization of three different TRP channel subunits has also been described, e.g., for TRPC3/C6/C7 [37], TRPC1/C4/C5 [38], or TRPV4/C1/P2 [39] although heteromerization of two TRP channel subunits seems to be more commonly found [20]. It seems fair to speculate that with an increasing number of different TRP channel subunits being co-expressed in the same tissue or cell type, the probability for heteromerization increases which in turn may serve as a mechanism to fine-tune cellular responses to tissue-specific environmental stimuli [40]. For example, TRPV4, TRPC1 and TRPC6 have been shown to heteromerize in dorsal root ganglion neurons where they mediate mechanical hyperalgesia and primary afferent nociceptor sensitization [41] whereas TRPV4, TRPC1 and TRPC6 alone have no influence on the baseline mechanical nociceptive threshold [41][42][43]. Other examples for processes specifically regulated by heteromeric TRP channels include TRPC1/4 which mediates a large depolarizing plateau potential in lateral septal neurons that is the cause for epileptiform burst firing [44], TRPV1/4 induced angiogenesis in retinal microvascular endothelial cells (RMECs) in contrast to TRPV4 alone which inhibits angiogenesis in endothelial cells from prostate cancer [45], or TRPC3/6 which plays an important role in T-lymphocyte apoptosis and is increased in septic rat peripheral blood T-lymphocytes [46], indicating that heteromerization may also occur as an adaptive response to an inflammatory milieu.

Thus far, the most important identified structural domains for stabilization of heteromeric TRP assemblies are ARDs and CCDs located on the N- and C-termini of the TRP subunits. To exemplify the molecular mechanisms that stabilize heteromeric assemblies, the well-described heteromeric TRPC1/3 is illustrated in Figure 2. Heteromeric TRPC1/3 is stabilized by non-covalent interactions between N-terminal ARDs and CCDs of the individual TRPC channel subunits whereas the homomeric TRPC3 assembly is stabilized by interactions between CCDs on the C-terminus with ARDS and CCDs on the N-terminus, indicating different molecular mechanisms for stabilization. Co-expression and heteromerization of TRPC1 and TRPC3 has been confirmed in skeletal myocytes [47]. In contrast to homomeric TRPC1 which promotes muscle regeneration after muscle atrophy [48], heteromeric TRPC1/3 plays an important role in the differentiation of myoblasts during myogenesis [47], consolidating the notion that heteromeric TRP assemblies are linked to other signal cascades than their homomers. The exact stoichiometry of TRPC1/3 heteromers (1:3, 2:2 or 3:1 for TRPC1:TRPC3, as shown in Figure 2) remains, however, unclear and may potentially vary with respective consequences for channel properties. 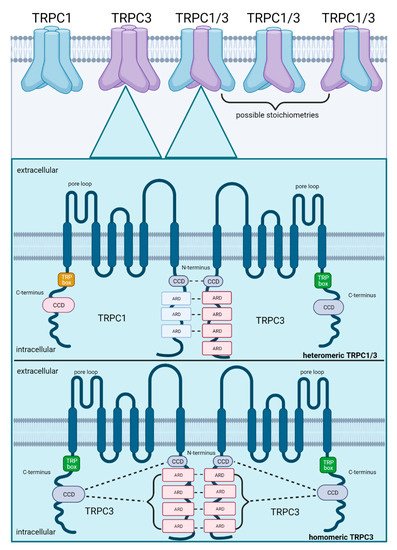 In line with different functional effects from homomeric channels, heteromeric assemblies of TRP channel subunits have a unique cation conductance that is unrelated to the additive conductance of the individual channel subunits. This was shown, for example, for the heteromeric assembly of TRPV1 and TRPV3 in HEK293 cells, which has an intermediate conductance compared to the homomeric assemblies of TRPV1 and TRPV3 [49]. Similarly, an intermediate conductance as compared to the homomeric assemblies was reported for TRPC1/P2 [21]. As such, TRP channels may adapt their individual conductivity (and putatively also their opening probability and their intracellular localization) by forming heteromers, thereby modulating cation influx and downstream cellular responses [21][50][37][51].
Interestingly, heteromeric TRP channels do not only show a unique cation conductance but also a distinct activation of downstream signaling pathways which is dependent on their cell type expression. Heteromeric TRPC1/3 as well as the heteromeric TRPC3/6/7 channel assembly have been reported to act as store-operated channels [48][52][53]. That notwithstanding, these assemblies activate different signaling pathways, as TRPC1/3-mediated Ca2+ influx plays a critical role in the differentiation of neuronal cells [48], whereas TRPC3/6/7 mediates an inflammatory response in astrocytes [37]. Heteromeric assemblies of TRP channel subunits have also been demonstrated in endothelial cells, e.g., TRPV4/C1/P2 in rat mesenteric artery endothelial cells (RMAECs) [39] and TRPV4/C1 in human umbilical vein endothelial cells (HUVECs) [7]. Heteromeric TRPV4/C1/P2 was shown to cause a flow-mediated Ca2+ influx, which is considered to play a major role in vasodilation, as it leads to the production of endothelial vasodilators like NO. A vasodilatory function in vascular endothelial cells has similarly been suggested for TRPV4/C1 which can be activated by stromal interaction molecule (STIM1) and Ca2+ release-activated calcium channel protein (Orai1), resulting in store-operated Ca2+ influx [7]. In addition to vasoregulation, maintenance and regulation of barrier properties is a basic function of pulmonary microvascular endothelial cells that is similarly regulated by TRP channel mediated Ca2+ influx. The resulting increase in intracellular Ca2+ concentration activates the calmodulin (CaM)/myosin light chain kinase (MLCK)-signaling pathway which in turn triggers cell contraction and additional Ca2+-dependent signaling cascades such as disassembly of intercellular junctions, ultimately resulting in increased endothelial permeability. Amongst others, TRPC1/4, TRPC3/6 and TRPV1/4 have been shown to be expressed and regulate barrier function in pulmonary microvascular endothelial cells. TRPC1/4 and TRPC3/6 present some of the best characterized heteromeric TRP channels, whereas TRPV1/4 is a recently discovered TRP heteromer. All three TRP heteromers will be described below in greater detail as they regulate barrier function and play an important role in lung inflammation.