Transplantation of neural stem cells (NSCs) has been proposed as an alternative novel therapy to replace damaged neural circuitry after ischemic stroke onset. Nonetheless, albeit the potential of these cells for stroke therapy, many critical challenges are yet to be overcome to reach clinical applications. The major limitation of the NSC-based therapy is its inability to retain most of the donor stem cells after grafting into an ischemic brain area which is lacking of essential oxygen and nutrients for the survival of transplanted cells. Low cell survival rate limits the capacity of NSCs to repair the injured area and this poses a much more difficult challenge to the NSC-based therapy for ischemic stroke. In order to enhance the survival of transplanted cells, several stem cell culture preconditioning strategies have been employed. For ischemic diseases, hypoxic preconditioning is the most commonly applied strategy since the last few decades. Now, the preconditioning strategies have been developed and expanded enormously throughout years of efforts. This entry systematically presented studies searched from PubMed, ScienceDirect, Web of Science, Scopus and the Google Scholar database up to 31 March 2020 based on search words containing the following terms:“precondition” or “pretreatment” and “neural stem cell” and “ischemic stroke”. The searched data comprehensively reported seven major NSC preconditioning strategies including hypoxic condition, small drug molecules such as minocycline, doxycycline, interleukin-6, adjudin, sodium butyrate and nicorandil, as well as electrical stimulation using conductive polymer for ischemic stroke treatment. We discussed therapeutic benefits gained from these preconditioned NSC for in vitro and in vivo stroke studies and the detailed insights of the mechanisms underlying these preconditioning approaches. Nonetheless, there was a scarcity of evidence on the ecacy of these preconditioned NSCs in human clinical studies, therefore, it is still too early to draw a definitive conclusion on the efficacy and safety of this active compound for patient usage. Thus, we suggest for more in-depth clinical investigations of this cell-based therapy to develop into more conscientious and judicious evidence-based therapy for clinical application in the future.

Stroke is defined as rapid neurological dysfunction due to the disturbance in cerebral blood supply, with acute onset of clinical signs and symptoms persisting for more than 24 h or until death. It is a leading cause of neuronal impairment and adult disability worldwide in which about 70% of the stroke survivors suffer from reduced work capacity, while the remaining 30% require self-management assistance. About 85% of the stroke cases reported are classified as ischemic stroke, a focal neurological deficit that occurs due to insufficient cerebral blood flow (CBF) triggered by occlusion of blood vessel [1]. CBF less than 20 mL/100 g of brain tissue per minute will lead to irreversible neuronal injury within an hour, whilst a complete absence of CBF within 4–10 min will cause immediate death of brain tissue [2]. The onset of ischemic neuronal injury is initiated by the disruption of brain nutrient, energy and oxygen, which elicits a series of interrelated and coordinated biochemical events that eventually lead to the neurovascular unit damage within the core of infarction. These biochemical events include ionic imperturbation, release of excess glutamate which leads to excitotoxicity, rapid increase in intracellular calcium that in turn activates multiple intracellular death pathways, accumulation of pro-inflammatory cytokines which promotes inflammatory injury and ultimately production of free radicals which leads to irreversible damage of the respiratory chain, mitochondrial dysfunction and eventually neuronal cell death [3].

The neuronal cell death that occurs following ischemic stroke can be reduced if the blood flow occlusion is removed and tissue reperfusion is restored quickly. Treatment for patients with acute ischemic stroke is guided by the time from the onset of stroke, the severity of neurologic deficit and findings on neuroimaging. It was proved that intravenous thrombolysis with intravenous recombinant tissue plasminogen activator (rtPA, alteplase) administration significantly reduced mortality and disability associated with ischemic stroke within 4.5 h after onset [4][5]. Later treatment may improve outcomes in selected patients, with the treatment window extended to 9 h from onset. Moreover, there is growing evidence that intra-arterial catheter-based mechanical thrombectomy of occluded large intracranial arteries improves outcomes in selected patients with acute ischemic stroke when performed up to 24 h after onset [6]. Nonetheless, despite the fact that these primary therapies could allow rapid restoration of blood supply and reduce stroke-related disability and mortality, they are unable to trigger regeneration of new viable neuronal cells to replace the damaged brain tissue and thus cannot completely restore the brain function [7]. As a consequence, poor prognosis is observed among ischemic stroke patients. This is indicated by the reports which showed that almost one-third of stroke patients who received the clinical stroke treatment are unable to ambulate even after treatment [8], and almost half of stroke patients who have suffered a first stroke are at risk of recurrent stroke within a few days or weeks after the initial treatment [9]. The constraints of current ischemic stroke therapy have led to the demand for alternative therapeutic approaches such as using robust neural stem cell (NSC)-based therapy to promote brain repair and remodeling in stroke-induced injury patients [10].

Survival, proliferation, migration and differentiation of NSC are the key regenerative processes to promote post ischemic recovery. Reports had shown that patients with ischemic stroke injury are capable of undergoing natural endogenous neurogenesis at the ischemic penumbra region of the brain [11][12][13]. Endogenous NSCs reside in two active neurogenesis brain regions: the subventricular zone (SVZ) of the lateral ventricles and the subgranular zone (SGZ) of the dentate gyrus (DG) of the hippocampus [14] (Figure 1). Under normal physiological conditions, these endogenous NSCs remain quiescent in adult brains. After ischemic injury, the endogenous NSCs are activated to proliferate and migrate towards the lesion site by several neurotrophic factors secreted by the ischemic brain tissue. The factors include brain-derived neurotrophic factor (BDNF), vascular endothelial growth factor (VEGF), cytokines like monocyte chemoattractant protein (MCP-1) and macrophage inflammatory protein (MIP-1) [14]. Within a week after the lesion, newly generated neurons appear at the boundary of the damaged area [15], implying that neuroregenerative therapy using endogenous NSCs is highly anticipated as an effective strategy for treating degenerative brain diseases such as ischemic stroke. Nonetheless, this spontaneous regeneration by endogenous NSCs is insufficient for structural or functional restoration of the injured brain, as the majority of these newly formed neurons die before functional maturation, leaving only a limited number of cells which could stably integrate into the neuronal circuitry [16]. 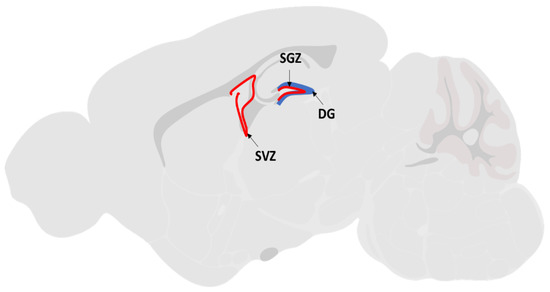 Figure 1. The sagittal brain section illustrated the location of the subventricular zone (SVZ) of the lateral ventricles and the subgranular zone (SGZ) of the dentate gyrus (DG) regions.

Despite the fact that limited clinical data is available to date, NSCs preconditioned by hypoxic condition, small molecules such as minocycline, doxycycline, adjudin, IL-6, combination of NaB and nicorandil, as well as electrical stimulation had been found to significantly improve cell survival and biological functions of transplanted cells in experimental scenarios. From the largely flourishing outcomes in the experimental models, preconditioned NSC definitely possesses potential to be applied in clinical treatments, provided all the issues and impracticalities are effectively addressed and solved in future.

Another important aspect that needs to be considered for preconditioned NSCs-based therapy is its long term safety, particularly with regard to the potential of tumorigenicity after stimulation by preconditioning approaches. In order to further enhance the efficacy of stem cell-based transplantation therapy, a combination of NSC engineering strategies with preconditioning strategies is recommended to provide enhanced cell replacement, trophic support, immunomodulatory as well as regenerative potential for better therapeutic effects. In addition, alternative treatments using NSC-derived extracellular vesicles (EV) have also been highlighted recently in neurodegenerative disease. This EV-based therapy has spurred a renewed interest in their utility for a cell-free therapeutics option, where it could avoid problems encountered by NSCs-based therapy such as low cell survival rate and high graft rejection after transplantation.