Poly(methyl methacrylate), PMMA is a lightweight insulating material that is known for its high Young's Modulus and good optical transmittance properties. Benefiting from these properties, there are recently vast interests to produce conducting PMMA for various applications including electronics, corrosion protective coatings,  diodes, sensors, and many more. Conducting PMMA is possible to produce by incorporating conducting polymers such as  polyaniline (PANi) by physical blending method or by co-polymerization technique. PANi has been the main choice to incorporate with PMMA due to its good conductivity, better environmental stability, and good redox reversibility. In addition, the limitations of PANi include poor adhesion, low mechanical stability and, limited solubility in most organic solvents can be surpassed by blending or co-polymerizing with thermoplastics such as PMMA.

Poly(methyl methacrylate), commonly abbreviated as PMMA, is a transparent polymer with good rigidity and dimensional stability. Since a German scientist named Otto Rohm first discovered its application in 1934 [1], this acrylic polymer has gained considerable interest as a substitute for glass due to these unique properties, such as good mechanical properties, light weight, shatter resistance, and ease of processing [2]. However, throughout the years, there has been wide interest in fabricating conducting materials by using PMMA as the main material due to the demands to produce conducting material with balanced properties, like high conductivity and good mechanical properties [3]. More importantly, PMMA can be chemically co-polymerized or physically blended with other conducting polymers to produce a new material with synergetic properties between the two monomers [4].

Polyaniline (PANi) is one of the conducting polymers that is usually used in conjunction with PMMA. PANi consists of aniline monomers repeating units with a chemical formula of C6H5NH2(Figure 1), and it can be chemically or electrochemically polymerized to produce a long chain of polyaniline. 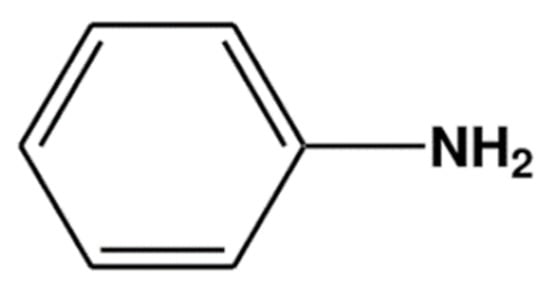 Thus, polyaniline (PANi) has gained popularity as favorable polymers that have been used extensively as the main material for the fabrication of many conducting materials. One of these states is the colorless leucomeraldine (LB), which is the fully reduced PANi, while the emeraldine base (EB) state with a violet-blue form is the half oxidized PANi, and the purple pernigraniline (PB) is the fully oxidized form of PANi. However, the only fully conducting form of PANi is the emeraldine salts (ES) state. Protonation is done by doping the PANi in an acidic medium with a pH of around 3 to 4, such as hydrochloric acid [5] and sulphuric acid [6].

Thus, throughout the years, PANi has been incorporated with PMMA for various applications, including electrochemistry and optoelectronics devices [11][12][13], sensors [14][15][16], and artificial muscles [17][18]. The mixture produced from the mixing of conducting PANi with PMMA-insulating phases enables the control of the electrical characteristics and increases the conducting phase above the percolation threshold to a few orders of magnitude [19]. The previous literature reported that the conductivity in such PMMA/PANi copolymers could be controlled in a wide range (more than 8–10 orders of magnitude) by altering the amount of PANi incorporated [20]. Hence, the conductivity increases systematically with increasing concentration of PANi until the optimum saturation level is reached [21].

Analysis done using linear sweep voltammetry (LSV), chronoamperometry (CA), and cyclic voltammetry (CV) proved that PMMA/PANi exhibited good mechanical stability with low background current density to surpass difficulties of cathodic polarization in metal when immersed in a marine environment [11]. (2019) to study the suitability of PMMA/PANi composites for electrochemical device application. The suitability of PMMA/PANi electrospun fibers in laccase immobilization is due to the presence of numerous chemical functional groups on the surface of PMMA/PANi, which promotes successful immobilization of biomolecules by both adsorption and covalent binding methods. Despite the increased number of functional groups, PMMA/PANi electrospun fibers exhibited high porosity, which caused more laccase to be immobilized in 110 mg/g and 185 mg/g for systems with the enzyme attached by adsorption and covalent binding, respectively [26].

PMMA/PANi blends may also be a promising material for electrical application such as polymer light-emitting diode (PLED). The potential of PMMA/PANi blends such as PLEDS comes from the PMMA (insulator polymer) that acts as a donor while PANi (conducting polymer) acts as an acceptor. Not only that, but blending of PANi with PMMA has been found to improve luminescence, which is essential for PLED applications. However, optimization of several factors such as polaron-exciton quenching, donor concentration in donor-acceptor Förster resonance energy transfer (D-A FRET) system, branching of polymer chains, and, bipolaron states must be taken into consideration to obtain optimized luminescence of PMMA/PANi blends [12].

Corrosion-protective coatings are normally applied on the surface of metals to prevent corrosion due to their cost-effectiveness. PANi has been used for anti-corrosion coatings mainly due to its good conductivity, better environmental stability, and good redox reversibility [28]. However, the limitations of PANi include poor adhesion and mechanical stability, which leads to the formation of pores that serve as a path for corrosion ion to penetrate the coating and cause corrosion. Thus, the performance of the coating can be improved by combining PANi with other polymers such, PMMA [30][28].

PANi exhibits controllable electronic properties and room temperature sensitivity due to its variable oxidation states. Thus, PANi is an especially suitable material in sensing applications [31]. (2020) fabricated a reliable and stable sensor made from PANi and PMMA for ammonia detection in a humid environment. This work reported that the PMMA material in the sensor solves the solubility difficulties and mechanical instability of PANi, therefore yielding a sensor with repeatable responses and good long-term stability in a humid environment [32].

For gas sensing applications, PANi electrospun fibers have been commonly used for the detection of various toxic chemicals including carbon dioxide (CO), hydrazine (N2H4), and ammonia (NH3). However, the commonly prepared PMMA/PANi electrospun fibers were in the form of nonwoven mat with different porosities, which resulted in inconsistency of the results obtained. As an alternative, a single fiber sensor with aligned PMMA fibers was demonstrated by Zhang et al. The prepared aligned PMMA/PANi fibers were reported to be higher in sensitivity and faster sensing response than the PMMA/PANi non-woven fibers sensors due to the larger surface area [15].

Actuators or artificial muscles are devices that mimic natural muscles. Conducting polymers such as PANi are suitable to be used for actuators due to the reversible chemical reaction of PANi that enables permeation or release of cations from an electrolyte by applying an electric potential. It was also found that the prepared PANi coated PMMA fibers possess a high degree of adhesion and good compatibility with eukaryotic cells when investigated by in vitro biocompatibility tests using cultured human amniotic fluid stem cells [17]. These results proved that metalized polymer fiber webs with good transparency such as PMMA is good to be used as electrode for PANI shell deposition by electrochemical polymerization.

Polymer blending refers to the process of mixing one or two different polymer types to create a new material. The process involves the physical mixing of at least two homopolymers to produce a new material with different properties in a short production time and with cheaper production cost [33]. To date, the literature has demonstrated that the polymer blends based on PMMA and PANi create a material with the synergistic combination of high mechanical properties from PMMA and high electrical conductivity from PANi [34][35][36]. Many methods, including the solution cast method, interfacial polymerization, and electrochemical polymerization, have been employed to produce the PMMA/PANi blends.

The blends were prepared using the solution casting method and with different weight percentages of PANi, namely 0, 0.5, 1.0, 5.0, and 7.0 wt%, which were added into a PMMA dichloromethane-containing solution. The respective solutions containing different weight percentages of PANi powders (between 0.05% to 0.5%) were stirred for several hours at 60 °C before casting on a glass substrate. (2015), but this study focused on different concentrations of PANi and determined the effects on the morphology, electronic absorption spectrum, and the ability for acid doping. Moreover, this approach was used to confirm the nature of a cast film that depends critically on the relative rate of solvent evaporation with respect to the changes in the rate and subsequently the molecular interaction that occurred [37].

Interfacial polymerization occurs at the interface between the two immiscible phases. This process is used to polymerize polymer particles and membranes and is one of the most effective methods to yield high-quality PANi in large quantities [38]. In this polymerization process, the monomers diffuse to the interface due to the differences between the chemical potentials of two immiscible liquids [39]. The benefits of PANi interfacial polymerization include better growth control of polymeric structures to produce a polymer with more complicated nanostructures [40].

A series of polymer materials including the particles, capsules, and membranes are prepared via the interfacial polymerization approach and are widely used in many electronic applications. In order to improve the poor solubility of PANi, Abu Talib et al. (2019) dissolved nanofiber polymer blends consisting of PMMA/PANi (80/20 wt%) in chloroform for 24 h at 50 °C for complete dissolution [25]. The characterization of the resulted polymers using FTIR analysis confirmed the interaction of PANi with the PMMA matrix, as the band that is attributed to the stretching vibration of N–Benzenoid–N and N=Quinoid=N at 1485 cm−1and 1144

Different types of oxidants, such as ammonium persulfate (APS), ferric chloride (FeCl3), and potassium dichromate (K2Cr2O7), were used in the interfacial polymerization of PANi and by using HCl as a medium [38]. This work reported that the formation of PANi in the presence of composite oxidants (APS/K2Cr2O7) becomes faster, as compared to the formation with a single oxidant. The diffusion of PANi monomers into the aqueous phase occurred due to the hydrophilic property of the monomers [38].

4. Co-Polymerization of PANi with Various Thermoplastics

In addition, the chemical modification through graft co-polymerization has been applied to overcome poor processability of PANi [43][44][45]. (2015) prepared the PANi grafted with thermoplastic, through the thermoplastic atomic transfer radical polymerization (ATRP) on the backbone of polyaniline macro-initiators. The thermoplastic polymers were chosen as a matrix to support PANi, as these polymers are easy to process, vulnerable to modification, and have diversely tuneable physical and chemical properties [46]. The polymerization was done under an inert atmosphere and by using dimethyl sulfoxide (DMSO) as a solvent.

Co-polymerization enables a good combination of properties between two different monomers or the production a new polymer with attractive new properties [48]. However, the main challenge of co-polymerization is to avoid the random distributions between the copolymers along the polymer backbone [49]. It was found that the stability of the triblock copolymers under visible light irradiation at ambient temperature was improved by the addition of PANi block [49]. It was also reported by the previous literature that the triblock copolymer has better control of the on-chain orientation and thus is able to give an improvement in the produced conjugated polymers properties [50].Table 2 summarizes the advantages and disadvantages of the copolymerization and blending methods.