The central protein in the oncogenic circuitry is the Ras GTPase that has been under intense scrutiny for the last four decades.  The complexity of the Ras functioning is further exemplified by the fact that the three canonical Ras genes encode for four protein isoforms (H-Ras, K-Ras4A, K-Ras4B, and N-Ras).

The cellular Ras GTPase serves as a crucial molecular switch for non-oncogenic and oncogenic circuitry in cells. It is a tightly regulated key signaling molecule for many cellular processes as diverse as proliferation, cell adhesion, migration, differentiation, and death (Figure 1). Novel structural and functional properties of Ras GTPase in controlling tubulogenesis in endothelial cells [1] and pseudopodium dynamics in Dictyostelium [2] are emerging. Since the discovery of the roles of Ras in oncogenesis in the 1980s, the development of small molecular inhibitors against Ras has been the prime focus of pharmaceutical companies. 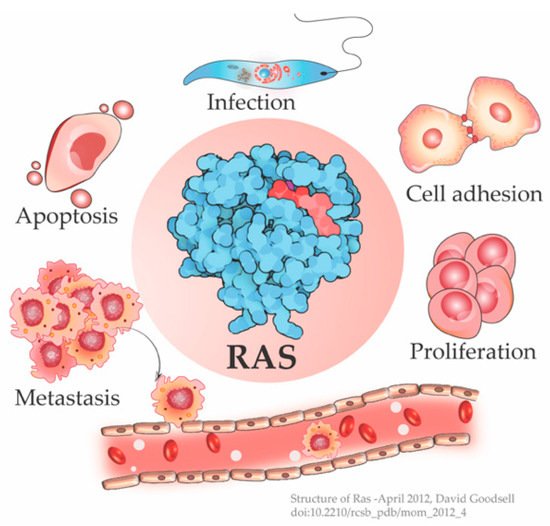 Figure 1. Ras is a signaling switch that regulates counteracting cellular functions like cell proliferation and apoptosis. Emerging studies have elucidated new functions of Ras e.g., in cytoskeletal rearrangement regulating cell adhesion and in parasitic infections like Leishmania, in addition to its well-known role in cancer progression. (Structure of Ras-April 2012, David Goodsell [3]).

In the 1960s, Jennifer Harvey observed that the viral preparation from leukemic rat induced sarcomas in newborn rats. This oncogenic viral genetic element inducing Rat Sarcoma was named H-Ras (Harvey Ras) [4]. Later, while serially passing Mouse Erythroblastosis virus (MEV) in Wister-Furth (W/Fu) rats, Kirsten identified another retrovirus carrying the Ras gene [5]. Initially named as a variant of Src (sarcoma), this gene was not only mutated in a diverse spectrum of cancers but also encoded a 21k Da protein that had crucial cellular roles in normal cells.
Scolnick et al. first hypothesized and Stehelin et al. later experimentally proved that these oncogenes were the proto-oncogenes which, when mutated and virally transferred, were converted to transforming oncogenes [6][7]. As observed by Harvey and Kirsten, the retroviruses arose as a result of the passage of the murine leukemia virus through rats. The process of genetic recombination accounts for the presence of such cellular genetic elements in simple retroviruses. A plausible hypothesis, as framed by various researchers, holds that integration of a provirus may occur upstream of a cellular sequence forming a chimera of cellular-viral genetic elements. In subsequent replications, non-homologous recombination occurs between the cellular and viral genetic elements leading to the acquisition and incorporation of cellular genetic elements into the retroviruses [8][9][10]. Later in the 1980s, Scolnick and his colleagues found the cellular origin of this membrane-associated protein, which is dependent on guanosine-5′-triphosphate (GTP) binding for its activation [11][12][13]. It was discovered that three loci of this gene encode for four proteins with ~80% sequence similarity: Harvey Ras (H-Ras), K-Ras A and B (Kirsten-Ras), and neuroblastoma Ras (N-Ras). K-Ras gene encodes for two proteins K-Ras4A and K-Ras4B via alternative splicing. These splice variants have distinct membrane targeting sequences. Except for a few residues, these isoforms have identical amino acid (aa) sequences in their G-domain (aa 1–86), and variations lie in the allosteric lobe (aa 87–166) and the hypervariable region (HVR) (aa 166–178/179) [14]. The HVR can be further subdivided into a linker domain (aa 166–178/179) and a targeting domain, wherein the post-translationally modified residues lie (aa 179/180–189) [15]. As the fourth exon in K-Ras encodes for the HVR, there lie differences in the HVR of K-Ras4A and K-Ras4B. K-Ras4A undergoes palmitoylation, whereas, K-Ras4B, which lacks a palmitoylation site, adds polylysine residues (Figure 2). 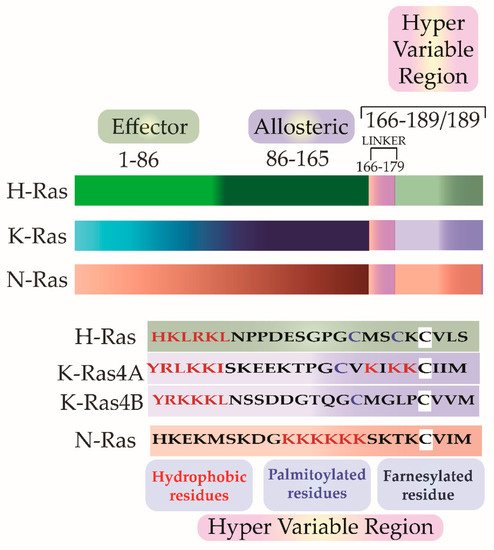 Figure 2. The isoforms share sequence similarities in their G-Domain (1–165 aa). This is followed by a Hyper Variable Region (HVR) (166–188/189), which differs in all three isoforms in sequence as well as in the post-translational modifications. In addition to farnesylation, a post-translational modification that all the three isoforms undergo, H-Ras and N-Ras further undergo dual and single palmitoylation, respectively. K-Ras undergo the addition of a stretch of polylysine residues.

The expression pattern of Ras isoforms is tissue-specific as well as developmental stage-specific [16][17]. The primary role of Ras emerged as a protein that assembles signaling complexes and relays signals to regulate an array of cellular activities. Emerging roles show its involvement in maintaining the integrity of actin cytoskeleton, in cell adhesion and migration, endocytosis, etc. [18]. This brings us to the crucial question—‘How does one signaling protein regulate counteracting processes like proliferation and apoptosis?’
Ras is a molecular switch that is activated by guanine nucleotide exchange factors (GEFs) that catalyze the exchange of guanosine diphosphate (GDP) with GTP. The counter process—the transition of Ras from active to the resting state—occurs by GTPase activating proteins (GAP) mediated GTP hydrolysis. Ras has a slow intrinsic GTP hydrolysis activity which is accelerated by GAPs by ∼105 folds [19]. Two well-characterized GAPs are neurofibromin (NF1) and Ras P21 Protein Activator 1 (RASA1) (p120GAP) [20]. If Ras deactivation fails, Ras remains at an active or “On” state. Once active, Ras binds to a range of effectors that carry out the downstream signaling. The specificity, as well as the diversity of signaling, arises due to binding with specific activators and effectors [21]. Chin et al. and Fisher et al. demonstrated that Ras-induced oncogenic transformation by uncontrolled cell proliferation requires a sustained expression of activated Ras and in an inducible oncogenic system, withdrawal of Ras expression led to tumor regression [22][23]. The ability of Ras to induce both proapoptotic and antiapoptotic signals may depend on an interplay between the type of receptor(s) activated, strength of activation, the access to activators and effectors, their binding specificities, kinetics, and stoichiometry of signaling. The outcome of Ras activation depends on whether it is a normal or an oncogenic cell, as a highly activated Ras in a normal cell will most likely relay a proapoptotic signal, whereas in an oncogenic setup it will relay an antiapoptotic signal [24].