In goat and sheep, CTSS is reported to be important for the development and maturation of oocytes by regulating cell proliferation and apoptosis. The purpose of this study was to investigate the role of CTSS in regulating cell apoptosis and hormone secretion in rabbit granulosa cells. Our results suggested that the CTSS gene can promote the proliferation of granulosa cells and reduce its apoptosis in vitro, while overexpression of CTSS promoted the secretion of progesterone and estrogen in rabbit granulosa cells. Therefore, manipulation of CTSS may improve development of oocytes, and thus provide an approach for better manipulation of rabbit reproductive performance.

Rabbits are multi-purpose domestic animals, which can be used as pet animals or biomedical model animals for scientific research, but in people’s lives, rabbits are mainly used for meat and fur production [1][2][3]. Rabbit meat has high nutritional value and is widely accepted by many people for its low content in fat, cholesterol, and high content in protein [4][5]. However, as the demand for rabbit meat increases rapidly, global rabbit meat production is still relatively low [6]. Accelerating the reproductive performance is an important strategy to increase rabbit meat production, thus it is vital to investigate the regulatory mechanism of factors affecting rabbit reproduction.

Ovarian granulosa cells (GCS) are an important component of follicles and play a vital role in follicle growth and development. Each follicle contains an oocyte, numerous GCS and theca cells [7]. GCS deliver regulatory signals to oocytes through zone projections (TZPs), and also provide nutrition and metabolite for oocyte [8]. Many studies reported that apoptosis of GCS affect cellular connection between GCS and oocytes [9]. It causes ovarian follicular atresia [10], which occurs in more than 99% of developmental follicles in mammals [11][12]. Another important role of GCS is the secretion of progesterone and estradiol, both of which play an important role in animal breeding and reproduction. It was reported that estradiol can promote the expression of FSH receptors in GCS [13], and promote the formation of rat antral follicles [14]. In bovine, low concentration of progesterone enhanced the follicular development, and the diameter of follicular increased [15][16]. Moreover, after follicle ovulation, GCS differentiated into luteal granulosa cells to form the corpus luteum. The main function of corpus luteum is to secrete progesterone to maintain pregnancy. Therefore, both GCS progesterone secretion disorder and GCS apoptosis will result in a decrease in rabbit reproduction performance.

Cathepsin S (CTSS), which is located on chromosome 13 in rabbits, is one member of 11 cysteine proteases, and plays an important role in extracellular matrix degradation and remodeling, antigen presentation, inflammation, and angiogenesis [17]. In malignant tumors, CTSS induces tumor proliferation, invasion and metastasis through various mechanisms [18][19][20]. It was reported that CTSS might be a potential predictor of chemotherapy response because up-regulation of CTSS is associated with tumor progression and poor prognosis [21] Studies in vitro also showed that CTSS promoted adipocyte differentiation by degrading fibrinolytic proteins [22]. Studies have also found that the polymorphisms of the CTSS gene are associated with obesity-related traits [23], and CTSS circulating levels are associated with triglycerides synthesis and accumulation [24][25]. CTSS can also regulate blood sugar by reducing glucose output [26]

The regulatory function of CTSS in cell proliferation has been widely investigated, while its function in the development and maturation of rabbits’ oocytes has not been reported. Our hypothesis was that CTSS plays an important role in follicle development and ovulation through regulating cell proliferation and hormone secretion. To verify this hypothesis, the present study aimed to investigate the functional role of the CTSS gene in cell proliferation and apoptosis, as well as progesterone and estradiol secretion in rabbit GCS. These results provide evidence with which to further uncover the regulatory mechanism which mediated the ovulation process and reproductive performance of rabbits.

2. Isolation and Identification of Rabbit GCS

Rabbit GCS were identified by HE staining and immunofluorescence by using FSHR antibody, our HE staining results showed that the nucleus of GCS is blue and the cytoplasm is red, and the pseudopodia between the cells was closely connected (Figure 1A). As shown in Figure 1B, cell nuclei were stained with DAPI and presented to be blue; FSHR protein was green and located in the cytoplasm. The positive rate of FSHR was 99%, indicating that the isolated GCS were 99%.

RT-qPCR was performed to determine the efficiency of Ad-CTSS and siRNA-CTSS in rabbit GCS. Our results showed that CTSS expression was remarkably increased by Ad-CTSS compared with Ad-GFP (Figure 2A, p < 0.05), and its expression was significantly decreased by siRNA-CTSS relative to siRNA-NC (Figure 2B, p < 0.05).

4. CTSS Promotes the Secretion of Progesterone and Estradiol in Rabbit GCS 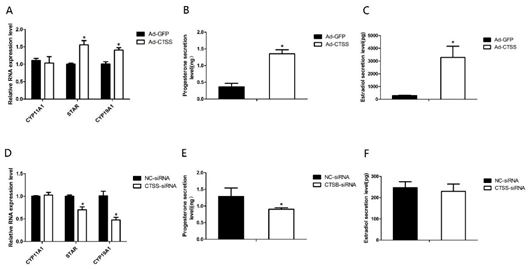 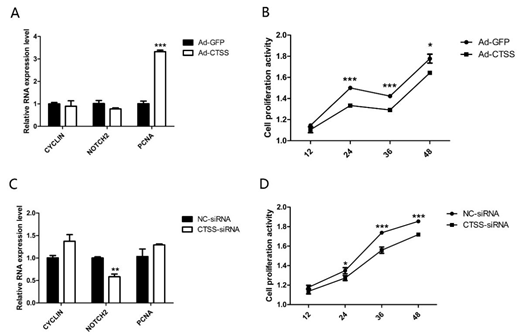 As shown in Figure 5A, compared with the Ad-GFP infected group, mRNA level of BCL2 (one of the main anti-apoptotic gene) was significantly increased by CTSS overexpression (p < 0.05). The other important pro-apoptotic gene, BAX, was decreased significantly by CTSS knockdown (Figure 5E, p < 0.05). Flow cytometry analysis revealed that CTSS overexpression inhibited the apoptosis of rabbit GCS significantly (Figure 5B–D, p < 0.01). As shown in Figure 5F–H, CTSS knockdown led to a remarkable increase in apoptotic cells in rabbit GCS (p < 0.05).

In summary, our data suggest that CTSS regulates the proliferation and apoptosis of granulosa cells by regulating the expression of key genes involved in these processes. In addition, CTSS is also involved in the process of progesterone and estradiol secretion in rabbit GCS. Overall, the present study provided evidence that CTSS may play an important role in regulating follicular development by regulating cell apoptosis and hormone secretion in rabbits. However, whether manipulation of CTSS expression in vivo can improve the reproductive performance of rabbits needs further research.