Embryogenesis is a complex multi-stage process regulated by various signaling molecules including pineal and extrapineal melatonin (MT). Extrapineal MT is found in the placenta and ovaries, where it carries out local hormonal regulation. MT is necessary for normal development of oocytes, fertilization and subsequent development of human, animal and avian embryos.

Embryogenesis of mammals is a complex, multi-stage process which includes cell division, proliferation, and differentiation, leading to embryo formation. Embryogenesis is controlled by various regulatory molecules, such as cytokines, chemokines, growth factors, and steroid hormones [1][2].

Pineal Melatonin (MT) regulates embryo and fetal development [3]. However, melatonin is produced in the mammalian embryo, within the mitochondria of the embryo [4]. Although requiring confirmation in future studies, including in human embryos, such data is challenging to the sole role of maternal, pineal MT in the regulation of fetal development. The presence of MT synthesizing enzymes is not surprising given their expression in sperm and oocytes [5][6], as well as in other early developmental tissue, including the placenta [7]. Pineal MT regulates the fetal circadian rhythm, including via the fetal SCN [3].

Aralkylamine N-acetyltransferase (AANAT) is an enzyme that is involved in the day/night rhythmic production of melatonin, by modification of serotonin. The synthesis of melatonin from serotonin occurs through two enzymatic steps. The primary chemical reaction that is catalyzed by AANAT uses two substrates, acetyl-CoA and serotonin. AANAT catalyzes the transfer of the acetyl group of Acetyl-CoA to the primary amine of serotonin, thereby producing CoA and N-acetylserotonin (NAS). In the biosynthesis of melatonin, NAS is further methylated by another enzyme, N-acetylserotonin O-methyltransferase (ASMT, HIOMT synonym) to generate melatonin. The ASMT final reaction has been suggested to be the rate-determining step in melatonin biosynthesis. Enzymes of the melatonergic pathway, such as AANAT and ASMT are present in the avian eggs, yolk and white, of Japanese quails at Hamburger–Hamilton stages 1–10, suggesting a presence and possible role of MT in the embryogenesis of this species [8].

The effects of pineal MT may be mediated via its induction of the circadian gene, Bmal1 [4][9]. Bmal1 has a number of effects, including suppressing pyruvate dehydrogenase kinase, leading to the disinhibition of the pyruvate dehydrogenase complex (PDC). PDC is readily incorporated into mitochondria, where it converts pyruvate to acetyl-CoA. Acetyl-CoA not only increases ATP production via the TCA cycle and oxidative phosphorylation, but is also a necessary co-substrate for AANAT and therefore, the activation of the mitochondrial melatonergic pathway, reviewed in [10]. Like MT, the loss of Bmal1 is highly detrimental to embryogenesis, including via effects in oocytes [11].

Although clearly requiring investigation in human embryos, such processes are likely to be significant regulators of successful embryogenesis and allow for the integration of MT data with the detrimental effects of Bmal1 knockdown on embryogenesis.

The addition of MT eliminated rotenone-induced disorders in embryo development, mitochondrial dysfunction and ROS induction, thereby reducing indicants of oxidative stress and apoptosis. MT also increased the expression of SIRT1 and PGC-1α genes, both being important promoters of mitochondrial biogenesis and optimized function.

The effect of MT on the in vitro development of microinjected pronuclear mouse embryos was also studied. MT increases blastocyst division speed and the number of its cells. When such blastocysts were implanted into mice, their pregnancy and birth rates were higher than that in the control group with pronuclear macroinjection without MT administration.

Eliminating the consequences of oxidative stress is also of vital importance for embryo cryopreservation, for which MT also has utility [13].

Many MT effects are mediated via the activation of its membrane receptors, MT1 and MT2 receptors. MT2 regulates proliferation and differentiation of osteoblasts and regulates their function in depositing bone [14]. Activation of the MT2 receptor promotes vasodilation which lowers body temperature in the extremities upon daytime administration [15].

The results of randomized placebo-controlled clinical trials have demonstrated that the inclusion of MT into the assisted reproductive technologies (ART) protocol for ovarian stimulation from the first day of gonadotropin-releasing hormone administration improved the oocyte and embryo quality and pregnancy outcome in women with a low quality of oocytes and polycystic ovarian syndrome [19][20][21]. Thus, experimental studies and clinical trials confirm the protective effect of MT on oocyte quality and embryo implantation, and point to the safety of its application at the first stage of infertility treatment.

4. Melatonin’s Effects on Histogenesis, Morphogenesis, and Organogenesis in Different Organs and Tissues

MT is also an important regulator of development subsequent to embryogenesis, including organogenesis, fetal and neonatal development.

MT’s modulation of neural system development through calcium signaling during human embryogenesis has been indicated by the use of gene ontology and the creation of an interactive MT and MT receptor protein network [22]. This network shows MT to interact with calcium signaling, e.g., with calmodulin (CALM1), G-proteins (GNAI1, GNAI3, GNA11), protein kinase α (PRKACG, PRKACA, PRKACB, PRKAR1B, TSE1), and adenylate cyclase (ADCY2, ADCYAP1) in neural system development. Such data indicates MT to regulate calcium signals and the cAMP signaling cascade.

MT’s antioxidant effects, induction of endogenous antioxidants and optimization of mitochondrial function helps to promote cellular homeostasis [23], in turn promoting appropriate programming of brain structures [24]. Localization of MT receptors in all the brain sections from the early stages of fetal development highlights the importance of maternal, placental and local MT to morphological maturation of the CNS [25][26].

Maternal and placental MT provides protection against DNA damage, including by the inhibition of DNA methyltransferase [27]. In a preclinical diabetes model, MT prevents the formation of neural tube defects, reduces apoptosis and stimulates the proliferation of neural progenitors by processes involving regulation of the ERK pathway [28]. The administration of MT to diabetic pregnant mice prevents lipopolysaccharide-induced neural tube defects [29]. MT’s participation in the control of epigenetic regulation of gene expression preserves the morphological and functional development program of all the embryo organs [3].

Overall, such data provide clear preclinical and clinical evidence of the role of MT embryogenesis. This may be of relevance to both successful pregnancy planning and subsequent pregnancy outcomes, with the prospect of utilizing MT in the preparation of patients for ART. When administered to patients with infertility problems, MT appears to improve the outcomes of in vitro fertilization. This review provides a detailed investigation of potential mechanisms of MT’s positive effect on ovary follicles, oocytes, and granulosa cells, as well as on embryo implantation processes. The authors discuss potential application of MT in vivo by patients preparing for ART (before ovulation), which can improve the quality of oocytes. The addition of MT to culture media for oocytes in vitro will accelerate their maturation, fertilization, and the early stages of early embryo development [30].

MT is a key regulator of reproductive functions in animals, including humans. The scheme of MT’s effects on implantation and embryogenesis is shown in Figure 1. 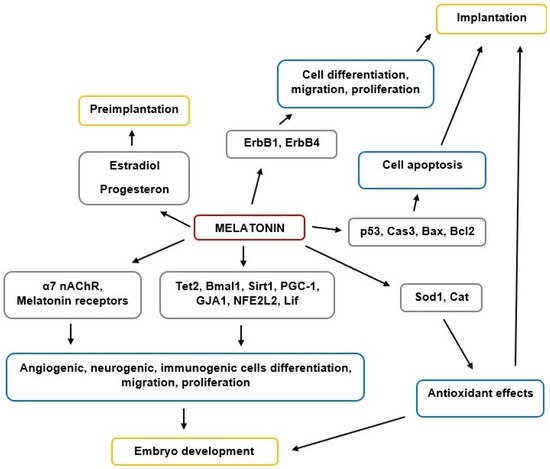 Figure 1. The scheme of MT’s effects on implantation and embryogenesis.

Overall, MT plays an important role in implantation and embryogenesis processes, although future research is required to clarify the importance of its various modes of action in early human development. MT is also clinically important in managing successful fertilization and pregnancy outcomes, including potential utility for infertility treatment and increasing ART effectiveness.