Surfactants are essential in the manufacture of polymeric nanoparticles by emulsion formation methods and to preserve the stability of carriers in liquid media. The deposition of non-ionic surfactants at the interface allows a considerable reduction of the globule of the emulsion with high biocompatibility and the possibility of oscillating the final sizes in a wide nanometric range.

Surface active agents, commonly known as “surfactants”, are molecules that decrease surface and interfacial tension at the interfaces between solids, liquids, and gases, acting as dispersants, wetting agents, emulsifiers, and detergents [1]. Furthermore, surfactants can maintain the stability of the dispersed phases through the primary interaction at the interface, regulating the exchange of energy and matter in natural and synthetic processes. Thus, the participation of surfactants in the interaction of apparently incompatible phases is crucial [2].
A dispersed system consists of one substance distributed (dispersed phase) in discrete units in a second substance (continuous phase). Most of the nanoparticle manufacturing methods in the biomedical field involve forming a liquid/liquid stable dispersed system with the contribution of surfactant agents to produce a new colloidal type solid/liquid dispersed system. The initial globule size of emulsified dispersed systems is greater than the colloidal particle size at the end of the manufacturing process, combined with the presence of a high surface free energy and, therefore, the tendency of resulted nanoparticles (NP) to flocculate and coagulate can be observed [3]. At the same time, the stability of NP as a dispersed system in an aqueous medium is a fundamental challenge and a critical subject of argumentation in most studies [4]. For this reason, the presence of surfactants is essential before, during, and after the formation of the NP [5].
The presence of a surfactant affects the particle size, polydispersity index (PDI), drug loading, zeta potential value, and correlation with apparent physical stability [6]. For this reason, traditionally, the focus of surfactants is restricted to the stability phenomena of NP [7]. However, the biological interaction highly depends on the surface phenomena of the NP and, consequently, on surfactant agents [8]. The arrangement of surfactants at biological interfaces contributes to cell, tissue, and organ homeostasis. Currently, it highlights the trend of surfactant therapies to lessen alterations in surface tension derived from inflammatory processes. However, the levels of industrial surfactants in the environment have always been a matter of concern and monitoring [9][10][11]. Current applications of surfactants in the manufacture of NP for biomedical applications seek a vectorization phenomenon to facilitate drug release at receptor sites [12]. In this regard, the participation of surfactants represents a multifunctional ingredient that usually requires adsorption by covalent crosslinking to guarantee better performance in biological pathways [13][14].
Polymeric NP are carriers that predominate in biomedical applications, while non-ionic surfactants confer high biocompatibility in most methodologies. For several decades, most nanoparticle formulations have included one of the following three excipients as a surfactant: polysorbates (PS), poly(vinyl alcohol) (PVA), or poloxamers. This broad trajectory of study has allowed an abundant exploration of technological benefits and formulation limitations.

2. Use of Surfactants for Nanoparticle Stabilization

Surfactants are crucial excipients in the synthesis of NP; they are amphiphilic molecules characterized by a hydrophilic head group (ionic or non-ionic) and a hydrophobic tail (Figure 1a). The amphiphilic nature of surfactants has been exploited to stabilize hydrophobic nanomaterials in aqueous media [15]. Hydrophobic regions interact with NP surfaces, and hydrophilic regions interact with water (Figure 1b), thus providing colloidal stability and improving dispersion stability by preventing NP aggregation [15][16]. The therapeutic potential of polymeric NP generally depends on their physicochemical properties such as size, shape, zeta potential, loading capacity, and surface functionalization with suitable surfactants [17][18]. 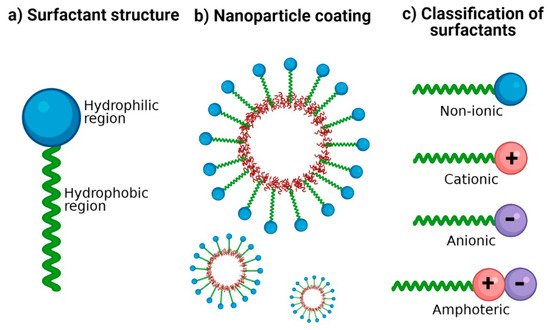 Figure 1. Surfactants for nanoparticle stabilization. (a) Classic structure of surfactants: its amphiphilic nature is represented with a hydrophilic region and a hydrophobic region. (b) Coating of NP with surfactants: the hydrophobic region possesses an affinity for the nanoparticle surface and the hydrophilic region with an affinity for the aqueous dispersion medium. (c) Classification of surfactants according to the ionic charge in its polar group: no charge (non-ionic), positive charge (cationic), negative charge (anionic), and both positive and negative charge (amphoteric).

Soap (general formula RCO-ONa) is formulated from anionic surfactants, and the first records of its manufacture date back to 2800 B.C. in ancient Babylon [19][20]. However, the word “surfactant” was first used in the 1940s [3][17]. More recently, in the 1960s, the term “amphiphilic” was introduced by Paul Winsor, a word that comes from two Greek roots (Amphi meaning “double”, and Philos meaning “affinity”) [3]. Finally, between the 1950s and 1970s, the first models based on n-alkylammonium were developed to study the arrangement and orientation of cationic surfactants in solid interfaces; these explain the position and approximate inclination angle of adsorbed surfactant molecules and their physicochemical implications in the surface coating [17][21]. As a result, the surfactants industry has increased due to its wide application and discoveries. A field in which the utility of surfactants is currently exploited is the pharmaceutical industry since scientists have developed polymeric NP to administer therapeutic and diagnostic agents [22].

The physical stability of NP mainly depends on electrostatic, steric, entropic, and Van der Waals forces [23]. The DLVO theory (Derjaguin-Landau-Verwey-Overbeek) describes the interaction energy between particles as the sum of electrostatic and Van der Waals forces; the resulting equilibrium explains the stability (suspension or flocculation) of colloidal systems [24]. When the surface charge of NP is homogeneous (either positive or negative), the Van der Waals and electrostatic forces oppose each other, causing the net force between particles to be strongly repulsive, and a stable suspension is formed [24][25]. As NP get closer to each other, their ionic atmospheres begin to overlap, and a repulsive force develops. On the other hand, Van der Waals interactions between NP are also generated due to forces between individual molecules in each colloid [26].
More stable dispersions can be obtained when the system contains oppositely charged NP and surfactants, such as anionic NP and cationic surfactants or vice versa. The dominant mechanisms are electrostatic interactions and hydrogen bonding [27]. In electrostatic stabilization, a minimum zeta potential of |20 mV| has been suggested [28]. However, there have been reported cases in which nanosuspensions with zeta potential below |20 mV| are physically stable [29][30]. This could be explained by the addition of non-ionic surfactants and the resulting steric effect. Therefore, the interpretation of the zeta potential to predict the stability of colloidal nanosuspensions should be considered with caution and in conjunction with the surfactants utilized [29].

Surfactants are classified according to the charge of their main group (polar head): non-ionic (uncharged) and ionic (charged) (Figure 1c). Among those that are charged, we find anionic (negatively charged), cationic (positively charged), and amphoteric (both positively and negatively charged) [31]. The charges of the zwitterionic or amphoteric surfactants can be permanent or can depend on the pH value to which they are exposed; for example, betaines can function as cationic surfactants at highly acidic pH [32][33]. A study showed the sensitivity of sulfobetaine to alteration of pH and inorganic salt. Hydrogen bonds are formed between the amide groups of 3-(N-erucamidopropyl-N,N-dimethyl ammonium) propane sulfonate and coordinated water in trans-[FeCl2(H2O)4] Cl structure; this masks the ionic forces of repulsion between the head groups of surfactants [34]. The zwitterionic head groups of phosphatidylcholine show electroneutral charges and high hydration, making them highly stable in aqueous media [35]. In addition, their electrostatic attraction causes the polarity of ionic surfactants to the dipoles of water. Moreover, non-ionic surfactants are solubilized without ionizing through the effect of weak hydrophilic groups such as ether-type bonds and hydroxyl groups; these are employed more frequently in pharmaceutical products. In Table 1, examples of surfactants commonly used in pharmaceutical formulations are mentioned.
Table 1. Examples of surfactants used in pharmaceutical formulations.

A wide range of classic surfactant agents is based on alkyl, peptides, lipids, DNA, molecular ligands, and polymers [17]. In recent years, particular interest has been placed in developing new biocompatible surfactant agents, representing low toxicity for the environment and human use; some of these agents are mentioned below. Carbohydrates: Have been studied due to their biodegradability and low toxicity profile. Smulek et al. [39] investigated a series of alkyl glycosides containing d-lixose and 1-rhamnose with alkyl chains of 8–12 carbon atoms. The results revealed that long-chain alkyl glycosides could be inexpensive biocompatible surfactants. Alkylpolyglucosides: Include a group of non-ionic surfactants with excellent wetting, dispersing, and surface tension reducing properties; their use for the stabilization of lipid NP is more frequent than classical stabilizers [40]. ImS3-n (3-(1-alkyl-3-imidazolium) propane-sulfonate): Represent a versatile class of zwitterionic compounds, which form normal and inverse micelles, capable of stabilizing NP in water and organic media [41]. Polyhydroxy Surfactants: Involve ethylene oxide-free non-ionic stabilizers known for their dermatological properties and favorable environmental profile [42]. Rhamnolipids: Biosurfactants produced by marine bacteria have shown a lack of cytotoxicity and mutagenicity, which justifies their commercial exploitation as natural and ecological biosurfactants [43][44]. Animal-derived surfactants: in the same context of using biocompatible surfactants, bioglycolipids such as cerebrosides (which represent a group of non-ionic surfactants) and gangliosides (these are good cationic surfactants) have been proposed [45]. PEG-ylated amides: PEG-conjugated amides improve the stability of nanosystems and allow a prolonged circulation time, reducing the phenomenon of accelerated blood clearance [46][47]. Recently, BioNTech and Pfizer used two novel surfactants in the formulation of their BNT162b2 mRNA Covid-19 vaccine, the PEG-ylated lipid ALC-0159 (2-[(polyethylene glycol)-2000]-N,N-ditetradecylacetamide) and the cationic lipid ALC-0315 ((4-hydroxybutyl)azanediyl)bis(hexane-6,1-diyl)bis(2-hexyldecanoate)) [48][49]. ALC-0159 allows forming a hydrophilic layer that sterically stabilizes the nanosystem, contributing to storage stability and reducing non-specific binding to proteins. Furthermore, ALC-0315 forms an electrostatic interaction with the negatively charged RNA skeleton allowing its stabilization, encapsulation, and the formation of particles [48][50]. Notably, several already known surfactants have been associated with new biological activities such as ceramides. For example, exogenously administered N-hexanoyl-D-erythrosphingosine has been reported to arrest the cell cycle, and in combination with Paclitaxel in biodegradable polymeric NPs can significantly enhance apoptosis in multidrug-resistant and sensitive cells [51]. Other strategies include stabilizing solid micro- or NP (Pickering stabilization), surfactant-free, and confers high resistance to coalescence, making it attractive for pharmaceutical applications, where some surfactants can cause adverse effects [52][53]. In addition, organic and inorganic particles are used, utilizing steric and/or electrostatic repulsion to inhibit coalescence and improve emulsion stability. A recent study reported Pickering emulsions stabilized by biodegradable poly(lactic-co-glycolic acid) (PLGA) NP and exposed that the degree of stabilization is highly dependent on the polymer composition [54].