Holography is a technology that records and reconstructs light from an object (object or signal light), using interference and diffraction. The light from the object and the reference light interfere with each other, and this interference pattern, recorded on a recording medium, is called a hologram. When only the reference light is irradiated on this hologram, the waveform of the original light from the object is reconstructed as it is through diffraction by the interference fringes. Therefore, holography is an ideal three-dimensional image reconstruction technique because the image reconstructed from the hologram can be seen as it is, even if the viewing angle is changed. In holography, the interference fringes are recorded volumetrically, and the signal light can be reconstructed one by one from the holograms recorded in the same place with slightly different conditions, for example, by changing the angle or phase of the reference and signal lights because the interference conditions are strict. Holographic technology is expected to be applied to holographic data storage with large capacity and a high data transfer rate since a large amount of data can be recorded in the same place and reconstructed at once by showing two-dimensional data as the signal light [1][2][3][4][5][6][7][8][9][10][11][12][13][14][15][16][17].
There are various types of holography, but two methods are mainly used as optical interference systems for the recording and reconstruction of holographic memory; one is the two-beam interference method in which signal and reference lights are irradiated from different angles and interfered (Figure 1a), and the other is the collinear (or coaxial) holographic interference method in which signal and reference lights are formed in a spatial light modulator (SLM) and interfered in the same axis (Figure 1b) [12][13][14][15][16][17]. In general, the former is widely used, while the latter can use a similar optical system to that of the conventional Digital Versatile Disc and the Blu-ray Disc and has an advantage against vibration.

Figure 1. Schematics of (a) two-beam interference method and (b) collinear interference method.
A photoreactive photopolymer is generally used for hologram recording material, and a hologram is formed as a difference in the refractive index of the material, in general. This shows large diffraction efficiency, which is an index of the brightness of the reconstruction image, while there are issues with the volume change associated with the photoreaction and material stability. Contrastingly, a magnetic hologram that is formed as the difference in the magnetization direction of a recording magnetic material was proposed by Mezrich [18] in 1969. Magnetic holograms are recorded by a thermomagnetic recording (Curie point writing) method [18][19][20][21][22] and reconstructed using the rotation of the polarization plane through a magneto-optical effect [18][20][21][22][23].
We developed magnetic holograms and their application technologies, using transparent bismuth substituted rare earth iron garnet (Bi:RIG) as the recording material [24][25][26][27][28][29][30][31][32][33][34]. Since magnetic garnet is an oxide, it is substantially a very stable recording material, and by recording on a magnetic material with appropriate translucency, it is possible to record volumetric holograms. Holographic memory using this as a recording material is also expected to realize a rewritable (reformattable) hologram memory, and there are no issues of volume change and shading that may occur with photopolymers. In this paper, the principle of magnetic holograms and its application to magnetic hologram memory are reviewed.

2. Principles of Recording and Reconstruction of Magnetic Holography 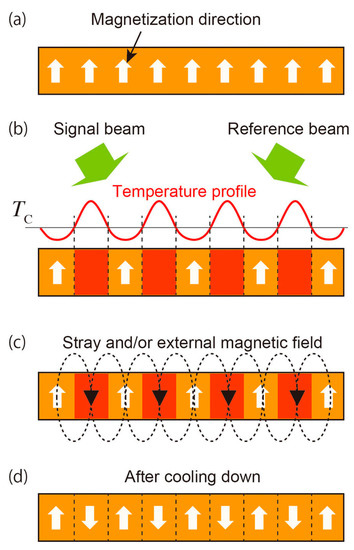 Figure 2. Schematics of recording process of magnetic hologram. (a) Perpendicularly magnetized recording medium. (b) As the result of interference, the medium is locally heated up higher than Curie temperature, TC, by the absorption of light. (c) The magnetization of the heated region is reversed by stray and/or external magnetic fields during cooling. (d) The interference pattern of light can be recorded as the difference in the direction of magnetization.
The effect of heat generated by the absorption of light is important to form clear magnetic fringes by thermomagnetic recording. The magnetic hologram is formed by the thermally demagnetized regions where the temperature exceeds the Curie temperature due to the absorption of light, while this heat diffuses to the low temperature regions in the magnetic film. This heat diffusion effect becomes greater in the case of recording on the materials with large heat conduction, especially in the metal film. In this case, if the energy density for recording is small, the generated heat diffuses before the temperature rises to the Curie temperature, and the temperature of the entire film rises; therefore, we cannot obtain a clear magnetic fringe. Chen et al. reported that the pulse width of the laser should be on the order of 10 ns or less to form magnetic fringes on MnBi films [35]. Nakamura et al. [25] also reported the effect of the period of the interference fringe and the pulse width of the laser radiation on the shape of the magnetic fringe in a magnetic garnet film with low thermal conductivity with a numerical simulation. They reported that the depth of the magnetic fringe of 500 line-pair/mm, in which the period of the interference fringe is 2 µm, is deeper than that of 1500 line-pair/mm in which the period of the interference fringe is 0.667 µm; a laser pulse of 50 ps is desirable for recording clear and deep magnetic fringes of 1500 line-pair/mm, compared to 25 ns. These results show that lateral thermal diffusion during thermomagnetic recording is important for the formation of magnetic fringes, that is, the wider the distance between fringes, the smaller the effect of thermal diffusion; the effect of thermal diffusion during irradiation can be reduced, using the high energy and short pulse laser. In addition, Lee et al. [36] reported that when the average temperature in the film during thermomagnetic recording exceeds the Curie temperature, the magnetization of the entire region disappears. Therefore, the total recording energy should not be too large. This heat diffusion effect is discussed later in Section 3.3, and a method reducing this effect to form deep magnetic fringes is proposed.

The magneto-optical effect is used for reconstruction of a magnetic hologram. The magneto-optical effect is a phenomenon in which the polarization plane rotates depending on the direction and strength of magnetization when linearly polarized light is incident on a magnetic material. The magneto-optical effect on transmitted light is called the Faraday effect, and that on reflected light is called the Kerr effect. Figure 3 schematically shows the reconstruction principle for transmitted light. When linearly polarized light is incident on the magnetic grating, the polarization plane rotates in the opposite direction depending on the direction of magnetization. At this time, when we see the component in the direction orthogonal to the polarization plane of incident light, the light has a phase difference of 180°. When the reference light is incident on the magnetic hologram, this component of the diffracted light interferes with each other, so that the signal light is reconstructed by the principle of the phase hologram [21][22][23]. The S/N ratio of the reconstructed light can be improved, therefore, by separating only the component orthogonal to the incident light polarization plane, using the analyzer [18].