Since their discovery in 2006, induced pluripotent stem cells (iPSCs) immediately stand out for their potential. While their differentiation capabilities are similar to those of ESCs, their somatic origin does not raise the same ethical questions as ESCs. In the cardiovascular field, methodological and intellectual progresses led to the development of highly sophisticated systems, such as patient-implantable cardiopatches, giving an enormous impulse to the regenerative medicine field.

Cardiovascular diseases (CVDs) are the number one cause of death globally; more people die annually from CVDs than from any other cause (source WHO).
On the basis of the 2017 National Health Interview Survey, about 17.8 million deaths were attributed to CVDs worldwide, which amounted to an increase of 21.1% from 2007 [1].
Heart failure is a direct consequence of the intrinsic inability of damaged cardiomyocytes to be replaced. While cardiomyocyte turnover is high in early childhood, in adulthood it decreases to only 1% [2]. When the injured myocardium has to be replaced, fibroblasts take the place of myocytes, leading to the formation of fibrotic tissue. This so-called tissue remodeling induces typical pathological features, such as cardiac hypertrophy and dilatation of the chambers, which finally lead to the progression of heart failure [3].
Traditional CVD treatments focus on slowing the progression of the disease or on ameliorating already existing damage. To date, no methods are available to reverse CVDs. Cardiac assist devices, which provide mechanical circulatory support, stabilize the cardiac functionality of the patient while on the waiting list for heart transplantation [4]. This so called “bridge to transplant” approach lasts two years on average; therefore, heart transplantation is currently the only existing possibility of long-term treatment for end-stage patients. Unfortunately, this approach has a high impact on health costs, and is limited by the low number of donors [5].
The need for alternative therapies able to reverse cardiovascular damage is therefore compelling. One of the major difficulties in the design of new therapies arises from the high complexity and the presence of multiple entities leading to CVDs. While small animal models are a powerful tool for basic research, allowing a deep and detailed observation of specific traits of a certain disease, the translation to the human system often fails to resemble the phenotype observed in the animal model. A huge number of compounds/targets that are highly effective in cell culture systems or in rodents, for example, fail once tested in clinical trials. In particular, non-human models cannot recapitulate the complete human pathophysiology of such a variable disease. For example, when we compare a mouse and a human heart, resting heart rate is 10 times higher in mice; in addition, responses to exercise and arrhythmias are different. Moreover, the discrepancy in terms of ion channel expression and pharmacokinetics mandates careful interpretation of results before they are extrapolated to humans [6]. An example of these differences has recently been published. Vegter et al. were not able to detect the typical miRNA downregulation observed in patients when analyzing well-established rodent heart failure models, highlighting once more the discrepancy between human and rodent models [7].
An additional important element to take into account while studying CVDs is the influence of comorbidities and risk factors such as the presence of diabetes, hypertension, and unhealthy lifestyle. These features play a key role in the development of CVDs, and while it is not possible to fully recapitulate these elements in rodent models, large animal models (pigs, sheep, dogs, and non-human primates) provide some of these characteristics, representing a bridge between rodent and humans. The efficiency of clinical translation from large animal models to humans has already been extensively demonstrated [8]. It is important to note that, while large animal models are suitable for therapeutic studies, the analyses of detailed and fine molecular mechanisms are laborious. It is possible to conclude that, while rodents are the primary choice for the dissection of the specific molecular mechanisms driving pathology onset and progression, large animal models are needed for the investigation of possible therapeutic approaches.
Human-based in vitro models represent the perfect compromise. On one hand they present the potentiality for the study of therapeutic approaches, and on the other hand the possibility of exploring complex molecular pathways.
In 1998, the potential of pluripotent human embryonic stem cells (ESCs) has been described [9]. However, due to legal and ethical issues, there are multiple limitations on the use of ESCs. In the search to overcome these limitations, other approaches developed. Since their discovery in 2006, induced pluripotent stem cells (iPSCs) immediately stand out for their potential [10]. While their differentiation capabilities are similar to those of ESCs, their somatic origin does not raise the same ethical questions as ESCs. In the cardiovascular field, the first studies of iPSCs’ reprogramming of cardiomyocytes were conducted on murine cells [11], and we had to wait until 2009 to obtain functional cardiomyocytes derived from human iPSCs [12].
The era of human iPSC cardiomyocytes broke new ground in cardiovascular research. While on one hand there is the potential of substituting animal experiments, and of generating models or platforms mimicking different CVD pathologies in order to evaluate the effects of distinct compounds; on the other hand, the possibility of “exchanging” or repairing the damaged cardiomyocytes with new ones is astonishing.

Stem cells are a powerful tool in fighting CVDs, and some light has now been shed on their mechanisms of action. Almost 20 years ago, the description of the unlimited potentiality of differentiation of embryonic stem cells gave an enormous impulse to the regenerative medicine field. From then on, when the in vitro differentiation of cardiomyocytes was the major challenge, methodological and intellectual progresses led to the development of highly sophisticated systems, such as patient-implantable cardiopatches. Even though iPSC applications have increased exponentially in recent years, from drug discovery platforms to clinically approved therapeutic treatments (Figure 1), some of the molecular mechanisms regulating iPSC biology are still debated. In particular, when analyzing the considerable amount of work describing the mechanisms regulating iPSC-mediated heart remodeling, the result is a highly complex, multifactorial picture, where cardiomyocytes exert paracrine and mechanical functions. In addition, interdisciplinary approaches led to the discovery that the innate immune system is another key player during heart remodeling. In a portrait where stem-cell-derived cardiomyocytes share the focus with cellular-derived factors and structural support, the immune system could be seen as the frame surrounding all other subjects. Due to this highly interconnected picture, and to the distinct characteristics of different CVDs, some questions need to be answered in order to determine patient/disease-specific optimal therapeutic approaches. Is an invasive transplantation of a 3D structure necessary? Or is a catheter-based delivery of extracellular vesicle/exosomes equally effective? Furthermore, how will the immunosuppression problem be solved? If the activation of innate immunity is fundamental, is the treatment of patients with cells that do not elicit any type of immune reaction recommended? Is the fine tuning of the immune system enough to drive an endogenous healing of the heart? 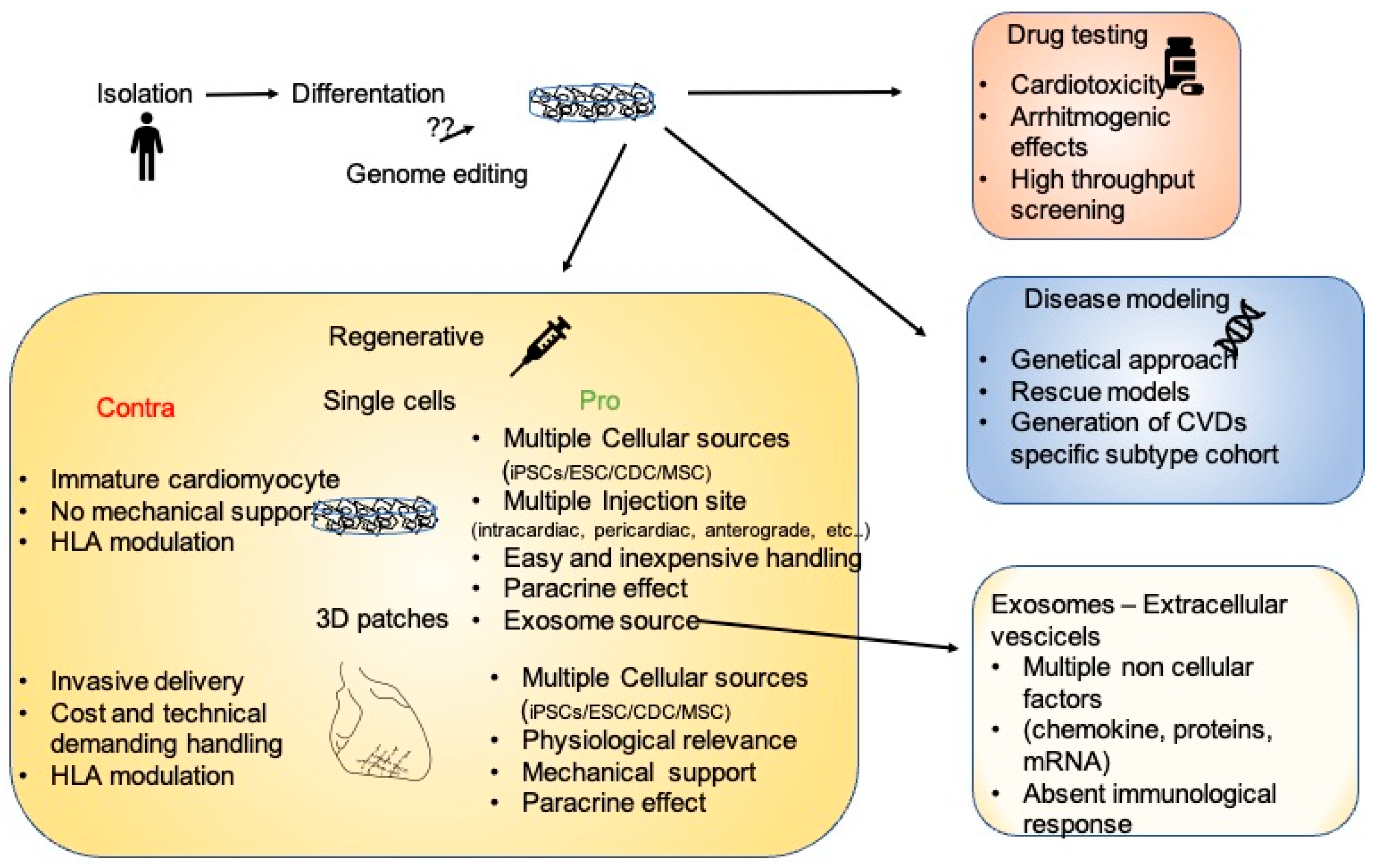 Figure 1. The many facets of iPSCs. After isolation and in vitro differentiation, iPSC cardiomyocytes could be employed as a platform for drug testing, for the modeling of multiple diseases allowing genetic characterization, or for regenerative therapies. In the regenerative scenario, the pros and cons of single cells or 3D structures are enumerated.
The answers to these highly complex questions call for a collaborative effort of specialized working groups with wide-ranging expertise in different research fields. In recent years, the foundation of multiple consortiums has already enabled the establishment of worldwide research alliance in order to join forces to analyze and translate stem cell therapeutic approaches into clinically approved treatments.