Imogolite nanotubes (INTs) represent a model of nanoplatforms with an untapped potential for advanced technological applications. Easily synthesized by sol-gel methods, these nanotubes are directly obtained with a monodisperse pore size. Coupled with the possibility to adjust their surface properties by using straightforward functionalization processes, INTs form a unique class of diameter-controlled nanotubes with functional interfaces.

Hollow cylinders with a diameter ranging between 1 and 100 nm, so-called nanotubes, are carving out prime positions in nanoscience and nanotechnology. Research into these systems started with Iijima’s 1991 seminal article on multi-walled carbon nanotubes (MWCNT) [1]. This was followed by the synthesis in 1993 of single walled carbon nanotubes (SWCNT) of truly nanometric diameters [2][3]. In the meantime, large efforts have been devoted to the study of boron-nitride nanotubes [4] and many different inorganic nanotubes [5][6][7][8][9]. Their physicochemical properties are recognized to be appealing for next-generation devices that could outperform current technologies for nanoelectronics [10], nanofluidics [11], selective molecular sieving [12], energy conversion [13][14], catalytic nanoreactors [15] and carriers for the sustained release of active molecules [16][17][18], to highlight a few. However, most of these applications require controlling at the nanometer scale, the nanotube dimensions (pore size and length), their interface properties as well as their organization, by using straightforward approaches if possible. In this context, having the possibility to synthesize nanotubular structures with desired size and interfaces would be a major step forward in exploring physical concepts in a controlled manner.
Among the wide variety of inorganic nanotubes, imogolite nanotubes (INTs) can boast having these unique and versatile properties. Belonging to clay minerals, these aluminosilicate minerals consist of a curved octahedral [Al(OH)3] layer on which isolated [SiO3(OH)] tetrahedron units are connected upright to the octahedral vacancy via covalent bonding between three mutual oxygen atoms (Figure 1). INT structure can hence be described as a three-dimensional (OH)3Al2O3Si(OH) elementary unit arranged in a hexagonal lattice [19]. It is worth noting that imogolite structure is very different from the one of halloysite, another clay nanotube ubiquitous in soils and weathered rocks, where the curved octahedral [Al(OH)3] layer forms the internal surface of the nanotubes whereas the external surface is composed of Si-O-Si groups [7]. These differences are certainly at the root of the unique properties of imogolite nanotubes.

Figure 1. Structure of a single-walled imogolite nanotube and detail of the arrangement of tetrahedron units on the octahedral vacancies. Color code: aluminum (blue); silicon (yellow); oxygen (red); hydrogen (white).
With inner diameters in the nanometer range (1–3 nm), INTs represent one of the most promising inorganic analogs of SWCNTs. Naturally formed from weathered volcanic glass either on Earth [20] or Mars [21], INTs can also be synthesized easily by using low-temperature sol-gel methods [22]. The advantage of INTs originates from a well-defined minimum in the strain energy of the structure [23][24][25][26][27], allowing the production of samples with monodisperse diameter [28][29] and chirality [30], contrarily to other nanotubes where the strain energy decreases monotonically with increasing diameters [31][32]. Coupled with the possibility to adjust either their morphology (single (SW) vs. double-walled (DW) structures, aspect ratio) and surface properties by changing only the nature of the precursors, the synthesis of INT thus offers a convenient and simple way to obtain diameter-controlled nanotubes with functional interfaces. Therefore, they started to be applied in a wide range of potential applications.

The synthesis of single-walled imogolite nanotubes (SWINT) was first reported by Farmer et al. in 1977 [22]. It consists of the co-precipitation under vigorous stirring of Al and Si precursors. This solution is adjusted to pH 5 with the addition of NaOH, and then immediately re-acidified to pH 4.5 with a mixture of HCl and acetic acid (Figure 2). Finally, the solution is aged upon heating under reflux or in autoclave. Since then, several improvements have been proposed in the literature by changing either the nature of the precursors, their initial concentration, their ratio (e.g., the hydrolysis ratio R = [OH]/[Al]) or the reaction pathway [33][34][35][36][37][38][39]. Among them, Denaix et al. obtained similar INTs as those reported previously, but without performing the acidification stage [36]. In that case, the hydrolysis step was directly controlled initially by adjusting the amount of NaOH added (typically R = 2, Figure 2). Most of the current studies dealing with INTs use one of the two protocols presented in Figure 2, with minor variations more or less. For instance, the [Al]/[Si] ratio is set between 1.5 and 2, a slight excess of Si precursor preventing the formation of aluminum hydroxides such as gibbsite and boehmite [34]. A “seeding” approach has also been explored by adding a certain amount of a processed synthetic imogolite sol in a solution of Al and Si precursors [40][41]. Although it avoids the pH adjustment step and allows the imogolite formation after heating the mixture for 2 days, this synthesis route remained quite confidential and has not yet been explored in detail. 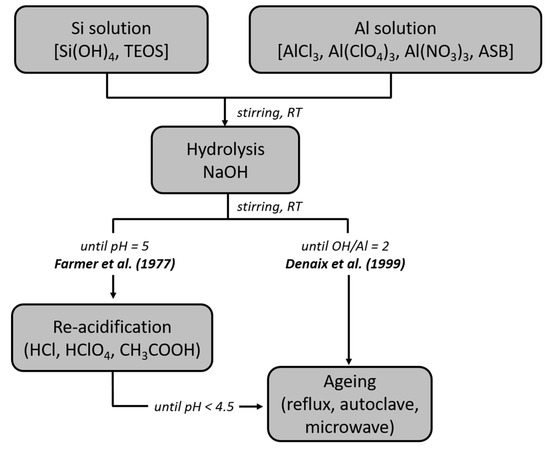 2.2. The Selection of Precursors

The sources of Al and Si precursors have also been varied. INT synthesis are commonly performed with Al(ClO4)3, AlCl3 and Al alkoxide (ASB: aluminum tri-sec-butoxide), Al(NO3)3 salt being less employed, while the silicon precursor is most often Si(OH)4 or an alkoxide (TEOS: tetraethoxysilane) [38]. However, regardless of the nature of the Al and Si precursors used, the synthetic imogolite nanotubes are always identical with inner and outer diameters of 1 and 2.5 nm, respectively. Conversely, Yucelen et al. suggested that the nature of the protic acid used (HCl, HClO4 or CH3COOH) may control the relationship between the INT precursor’s shape, formed in the early stage of the synthesis (also referred as “proto-imogolite”), and the resulting nanotube shapes [42]. More recently, Arancibia-Miranda et al. evidenced that replacing NaOH with KOH strongly impacts the morphology of the nanotubes in addition to producing a large amount of disordered structures [43]. INT diameter slightly increases by less than 20% while their average length becomes shorter, suggesting that the nature of the counter ions affects the hydrolysis of Al and Si precursors [44][45].

One of the most blatant examples of progress in INT synthesis arises from the isomorphic substitution of silicon by germanium [46][47]. Beyond a twofold increase in external diameter, replacing TEOS with a Ge alkoxide (e.g., TEOG: tetraethoxygermane) enables producing concentrated (molar) suspensions of Ge-imogolite analogues [48], an important key step towards large scale applications. Maillet et al. observed that the initial concentration of aluminum salt (CAl) controlled the resulting nanotube shape, producing either double-walled (Ge-DWINT, CAl < 0.4 mol·L−1) or single-walled nanotubes (Ge-SWINT, CAl > 0.75 mol·L−1) [49]. The mechanism involved seems to be a subtle balance between attractive and curvature energies during the early stage of the synthesis [49][50]. More interestingly, the energy minimum in the strain energy depends on the substitution ratio [Si]/([Si] + [Ge]) and allows us to predict the INT diameters with respect to the initial synthesis conditions [51][52]. In contrast to Si-INTs, Ge-analogues form short nanotubes with a reduced length (<100 nm) [29][47][52]. On the other hand, Amara et al. demonstrated that micron-long Ge-INTs can be synthesized by using the thermal decomposition of urea (CO(NH2)2) to produce hydroxyl ions instead of the slow injection of NaOH [53]. Hence, the synthesis of (OH)3Al2O3SixGe1−x(OH) INT provides us with a unique system of 1D nanostructures with monodisperse sizes and changeable aspect ratio (Figure 3).

The structure of INTs with inner and outer hydroxyl groups makes them excellent candidates for colloidal dispersions. Gustafsson moved forward with a unique intrinsic polarization, the isolated –SiOH groups on the inner cavity developing a negative charge, whereas the –AlOHAl groups along the external tube walls bear a weak positive charge [54]. This model has been subsequently corroborated by numerical simulations [24], showing no dependence on the substitution ratio [Si]/([Si] + [Ge]) [25]. Thanks to the surface charge, INTs are easily dispersed in polar solvents to form stable colloidal suspensions [55][56]. Furthermore, the possibility to varying both nanotube aspect ratio (through the synthesis conditions) and electrostatic interactions (pH, ionic strength, …) allows controlling, directly in aqueous phase, the self-organization of imogolite nanotubes from a liquid sol to arrested phases [57][58][59], making such nanotubes suitable for a wide range of solution processes. Similarly, it is also possible to control the nanotube arrangement in the solid state during the drying process. For instance, powders of Ge-SWINT tend to form large bundles on a 2D hexagonal lattice if they are processed from suspensions prepared at an ionic strength higher than ~10−3 mol·L−1 [59]. Interestingly, this kind of organization also induces significant radial deformations of the cross section, INTs having a regular hexagonal shape instead of a cylindrical one [60]. Another unique feature of INTs is the high surface density of hydroxyl groups (~18 OH/nm2), considering the atomic structure reported in [19], which offers multiple binding environments and renders the surface very hydrophilic with high water retention capacity [61][62][63]. INTs were recognized as good adsorbents very early on, especially in environmental contexts where they interact strongly with ions [36][64][65][66][67][68].
Despite these benefits, the presence of water inside INTs might hinder or block the diffusion of other interest molecules (CO2, CH4, …). Similarly, in the field of nanocomposites, the effective dispersion of nanoparticles must be achieved only by modifying their surface to make it compatible with the organic matrix. Hence, significant efforts have been undertaken in order to make INTs suitable with the intended applications.

3.2. Modification of the Inner Cavity

3.3. Modification of the Outer Surface of Imogolite

Modification of the external surface of imogolite has been strongly explored, mainly to render them compatible with another phase. As with the chemical modification of the INT inner cavity, the large density of hydroxyl groups offers a wide range of possibility for surface anchoring and numerous chemical pathways have been proposed with varying degrees of success (Table 2).
Table 2. Main functionalization routes of the outer wall of imogolite nanotube (INT).

It is well recognized that imogolite nanotubes remain insulating materials with large band gaps. To tackle this issue, structural modification of the outer wall has also been conducted this time by isomorphic substitution of Al3+ by Fe3+ [100][101][102][103][104][105]. The effect of Fe incorporation acts as specific coordination centers for organic moieties and leads to higher adsorption efficiency [102][103], while altering the electronic properties of the nanotubes even for low substitution rates [106]. Other isomorphic substitutions have been explored, on the theoretical background, by replacing both Al and Si atoms by elements of groups III (Ga, In) & IV (C, Ge, Sn) respectively [107], or by substituting the inner tetrahedrons by phosphorous and arsenic derivatives [108].