Nanofluids not only enhance (in most of the cases) the thermal efficiency, convection heat transfer coefficient, and exergy efficiency of the system but also can decrease the entropy generation of the system.

Nowadays, one of the vital global challenges is the increase of greenhouse gas content in the Earth’s atmosphere. The mean content of CO2 in the Earth’s atmosphere has increased from 390 ppm in 2011 [1] to roughly 410.19 ppm up to 2018 [2] which has resulted in increasing the Earth’s atmosphere temperature. This alarming increase in both CO2 content and its corresponding increase in temperature along with the finite resources of oil and gas have forced human beings to face a challenge as well as a new opportunity of finding a different source of energy; renewable energy. There are many types of renewable energy known so far. Renewable energy can be categorized into six distinct resources, including hydropower, modern biomass, geothermal, solar, wind, and wave and tide [3]. Solar energy has many advantages over other types of renewable energy. Most importantly, solar energy, compared to other types of renewable energy resources, is considered the greatest resource, as the energy provided to Earth by the Sun in an hour can be more than the whole amount of the energy consumed by human beings in a year [4]. However, solar energy is currently providing rather a small portion of the total energy supply; this energy can be the most useful energy in the future.
Solar energy can be separated into two major types, solar photovoltaic, which directly converts the Sun’s light to electricity, and solar thermal collectors which concentrate the Sun’s light to generate heat and use the heat to run heat engines [5].
The conversion efficiency of Photovoltaic (PV)cells are typically in the range of 10–20%, as much as the radiation heat up the cells, the efficiency goes down [5], which by considering the price is not affordable. However, besides its cost, one cannot deny that solar energy in some cases is the only option for remote areas and this advantage makes it an asset.
Another way to harness solar energy is the use of solar thermal collectors. The direct absorption solar collector (DASC) was the pioneer in this type of solar collectors introduced in the 1970s, instead of simple flat plate type collectors [6]. Solar thermal collectors work based on concentrating and absorbing the sunlight, converting it to heat, and transferring this heat to a working fluid which can be liquid or gas. Working fluids can be water, oil, molten salt, air nitrogen, or helium flowing through the collectors [7]. Enhancing heat transfer and thermal conductivity through these working fluids can cause increasing efficiency. In recent years, research on this issue got popular among scientists. It was suggested to add solid nanoparticles to the common working fluid to enhance the effective thermal conduction. Using nanoparticles instead of particles with sizes in order of micrometer diminishes the issues associated with erosion and corrosion of components as well as the sedimentation and clogging of particles [8]. This mixture considerably increased the heat transfer rate and the suspension called nanofluid [9][10][11]. Nanofluid, which consists of particles with a dimension less than 100 nm dispersed in a base fluid, can be defined as suspensions of NPs. This nanofluid is able to enhance the conductivity and heat transfer coefficient of working fluid. Choi et al. [9], by introducing and discussing a new idea on using nanoparticles, became pioneers in the efficiency enhancement of working fluid in thermal systems. Their results revealed the benefits of using copper-based nanofluid. Additionally, they discussed the theoretical aspect of the nanofluid’s thermal conductivity and the potential impacts of nanofluid in improving heat transfer. Over a decade ago, using nanofluid as the working fluid of collectors gained a great devotion as a revolution in heat transfer [12]. 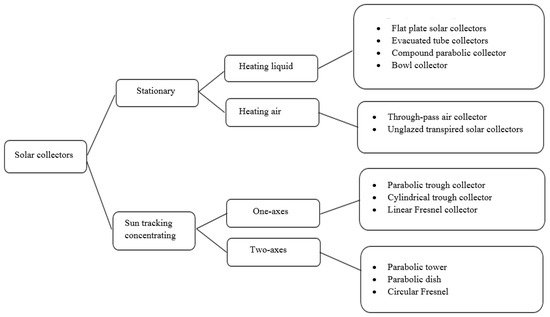 Figure 1. Solar collectors’ classification.
Parabolic trough solar collectors consist of a parabolic reflector. This parabolic sheet can be made by bending a sheet to a parabolic shape. The sheet should be highly reflective and be constructed as a long parabolic reflecting mirror. In this type, the solar collector should be pointed directly into the Sun, and since the solar radiation is parallel, all light waves can reflect on focal from all parts of the trough-shaped as shown in Figure 2. This consequently causes the central pipe to heat up. 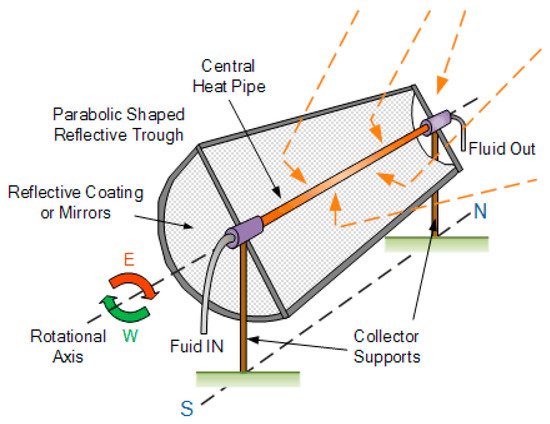 The receiver tube which is located at the focal line of parabolic trough reflective surface (Figure 3) can transfer the absorbed solar energy to the fluid flowing inside. The tube usually consists of two layers to make it more efficient. An outer layer is made out of glass which is transparent and anti-reflecting to solar radiation and can reduce convection and radiation losses and maintain strength and transmittance under high temperatures [24], as well as an inner layer of copper or selective blackened nickel which, inside of it, circulates the heat transfer fluid [25]. 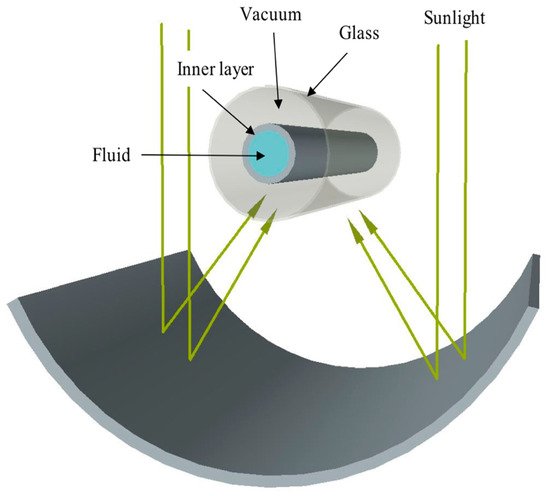 Figure 3. Detail of parabolic trough solar collector.
Coating of the inner layer makes it capable of reducing thermal radiation losses by absorbing the short-length solar radiation and also low emissivity for the longwave energy spectrum [24].
The device also includes one-axis solar tracking to align the trough with sunlight and make sure the maximum amount of radiation will be reflected on the focal line [26]. Parabolic troughs are rotated to track the Sun as it moves across the sky each day from morning to night. This is one of the crucial sections which can increase efficiency and maximize solar heat gain.
The critical section of parabolic trough solar collector is the heat transfer fluid flowing inside the tube, which is usually a mixture of water or thermal oil and other additives like nanofluids that enhance thermal conduction. The fluid is pumped through the tube and absorbs the solar heat reaching temperatures of over 200 °C. The hot water is then directed to a heat exchanger where it can heat a storage tank for different applications.
As mentioned above, PTC is used on large scale as solar concentrating technology. Nanofluid-based concentrating parabolic solar collectors (NCPSC) provide better energy absorption and conductive heat transfer compared with conventional parabolic trough concentrators [27]. Recently, the use of nanofluids as the working fluid in parabolic trough solar collectors (PTC) is getting more common.

Working fluid is one of the most essential parts of solar conductors which play a significant role in the heat transfer of PTC. It has been numerous attempts toward enhancing the thermal conductivity of working fluid from the beginning of solar energy usage. Khullar et al. [28] investigated the application of nanofluids in concentrating parabolic trough solar collectors (CPT). Otanicar et al. [29] conducted experimental research on the influence of different nanofluids used as working fluid on the efficiency of solar thermal collectors. The studied nanoparticles were graphite, two different silver nanoparticles of different sizes, and carbon nanotubes. It was shown that the efficiency with adding 20 nm silver particle improves roughly by 5% compared with the conventional working fluids. They investigated the effect of graphite, copper, aluminum, and silver nanoparticles (at a low concentration of 0.001 vol. %) dispersion into Therminol VP-1 on increasing the efficiency of power tower solar collectors. They showed that using the nanofluid in the receiver can lead to a theoretical increase of 5–10% in efficiency. However, they believed that the usage of nanofluids through solar collectors or dish solar collectors are not appropriate at that time and requires further improvement. A mathematical model is proposed by Khullar et al. [30] in order to investigate the effect of nanofluid concentration in NCPSC. They found that the application of nanofluid in parabolic through the collector (PTC) can enhance their thermal efficiency. Saidur et al. [31] studied the volume fraction and size effect of nanoparticles in direct solar collectors. It turned out that the extinction coefficient is directly proportional to the weight percentage of nanoparticles. However, the particle size has an insignificant effect on the optical characteristics of nanofluids. They also showed at 1.0% volume fraction, a good improvement has resulted in solar absorption and the nanofluid is almost not transparent to lightwave.
The mass fraction and mass flow rate influence of Al2O3 nanofluid as working fluid on the direct absorption-type solar collector studied experimentally by Verma et al. [32]. It was shown that at the particular wt % of approximately 5%, the maximum efficiency enhancement of 5% could be achieved. Parvin et al. [33] investigated the effect of Cu-water nanofluid volume fraction and Reynolds number on heat transfer performance of a direct absorption solar collector. The results showed that the forced convection heat transfer performance was increased with both increasing Reynolds number and volumetric concentration. More specifically, at the highest nanoparticle volume fraction and the largest Reynolds number, the best performance of heat transfer is achieved.

4. Application of Nanofluid in PTC 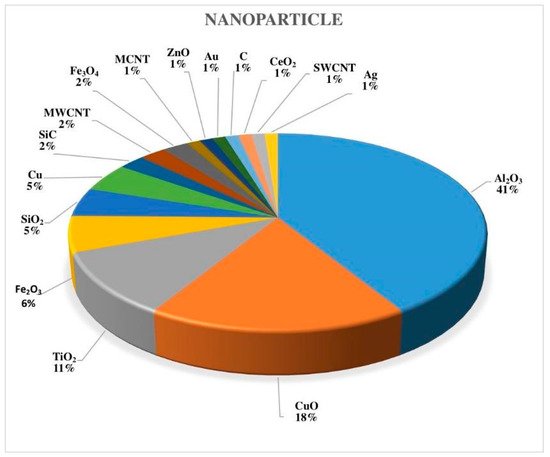 Figure 4. Share of different nanoparticles on the studies concerning PTC enhancement using nanofluids.
Additionally, the other way to study nanofluids is to talk about different types of base fluids in which the nanoparticles are dispersed in. There are mostly four significant types of base fluid used so far:
Another way to categorize the studies is to classify them by type of studies:
Nanoparticles used in the thermal enhancement of PTC have different diameter sizes which range from 4–100 nm [43][44]. As stated earlier, the thermophysical properties of nanofluids are of high importance. There are numerous studies trying to review the equations stating these parameters in terms of temperature, nanoparticle size, concentration, etc. A comprehensive review of these thermophysical properties is given in [34][35].
The main reason encouraging investigators to use nanofluids (instead of base fluids) is their enhanced thermal properties. Thermal efficiency and convective heat transfer are two main factors that are required to be enhanced to give a better performance in PTC. Also, nanofluids have higher thermal conductivity, density, and viscosity while lower specific heat capacity is comparing to the base fluid. It should be noted that higher viscosity is actually a drawback in the nanofluid application as it increases friction factor and hence causes pressure drop along the receiver tube of the PTC which finally increases the pumping demand of the nanofluid in PTC [39].
Thermal enhancement of PTCs has been in the canon of interest recently. The enhancement can be done by two methods: geometrical modification and application of nanofluids instead of common base fluids in PTC [39].
Among all types of studies that can be done on the application of nanofluid in PTC, the main focus of the present work is about reviewing different studies investigating thermal, thermodynamical, and hydraulic enhancement caused by the nanofluid application in PTCs.