The processing of information in real-time (through the processing of complex events) has become an essential task for the optimal functioning of manufacturing plants. Only in this way can artificial intelligence, data extraction, and even business intelligence techniques be applied, and the data produced daily be used in a beneficent way, enhancing automation processes and improving service delivery.

This section presents a list of software to be analyzed in this paper. These tools were selected using the methods described in the previous section. For each tool, a general description of the software and its main components is presented, and the advantages and disadvantages of the tool are identified. These tools were divided into two main categories: the first one is related to event brokers, while the second category is related to Business Intelligence (BI) and the data analytics process.

Apache Flume is a streaming data-based framework that allows the collection and aggregation of data, and to move large amounts of data in a distributed environment [1]. This tool was originally developed by Cloudera, with its ownership moving in 2012 to the Apache Software Foundation [2].
The main purpose of Flume is to ingest event data into the HDFS (Hadoop Distributed File System) in a simple and automated way. However, it can be used for various tasks, including data transport [3].
Flume supports several data reading mechanisms, including Avro, Thrift, and Syslog [4].

Apache Flume offers multiple components: Source, Channel, Sink, Interceptors, Channel Selectors, and Sink Processors [4].
The first of the three base components to be defined is Source, responsible for data input. It is necessary to expose that it has a major limitation, only extracting and supporting unstructured data (events) [2][4].
The Channel component is the intermediate component that handles data storage in the transition from the Source to the Sink. The operation performed resembles a queue [2][4].
To conclude the base components, the Sink component is the component responsible for sending data to the destination. Usually, the destination is the HDFS, but other options, like HBase, Hive, and Elastic Search, are supported, as well [2][4].
Regarding additional components, the Interceptors are used to modify or review the events transmitted between the source and the channel [5].
The Channel Selectors are useful for identifying which channel to select for data transmission when there are multiple channels. This component is typified according to the type of channel. The Default Channel Selectors, often known as Replicating Channel Selectors, are responsible for replicating all events on each of Flume’s channels. Multiplexing Channel Selectors use the address provided in the event header to decide the channel to which the event should be sent [4].
Finally, the Sink Processors are responsible for calling a specific selector from a selected group of sinks. To do this, fail-over paths are created for the sinks. These components are commonly used for load balancing events on multiple collectors [4][5].
Figure 1 illustrates the architecture that is obtained when all of these components are in use.

Sqoop is a tool that is designed for the data transfers between (Relational Database Management Systems) RDBMSs and the Hadoop ecosystem. Therefore, it is based on two major components: the connectors that allow Sqoop to overcome the differences in the SQL dialects supported by the different relational databases along with providing the optimized data transfer; plus, the Drivers meaning the JDBC Drive that is the standard Java API for accessing RDBMS and some data warehouses [8].
Thus, the basic architecture for Apache Sqoop is presented in Figure 2. 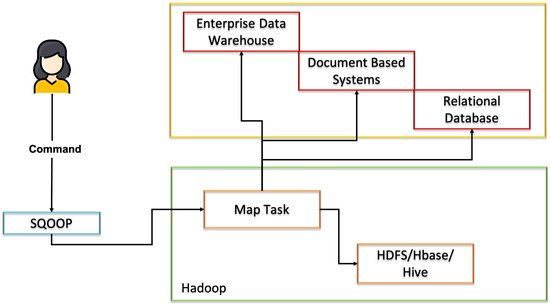 Figure 2. Sqoop architecture.
As can be observed, this tool only makes sense to be used when framed in Hadoop ecosystems.

Solace, initially called Solace Systems, is a middleware company based in Canada. This company is dedicated to the manufacture and sale of message-oriented devices and software for routing information. In 2001, Craig Betts founded Solace with the purpose of incorporating the messaging system into hardware [9].
Their flagship product, PubSub+, is an unified message broker that supports publishing/subscribing, queuing, requesting/responding, and streaming using open APIs and protocols through hybrid cloud and Internet of Things (IoT) environments [10].
This software is divided into 5 layers that will be described below:
These layers are organized as illustrated in Figure 3. 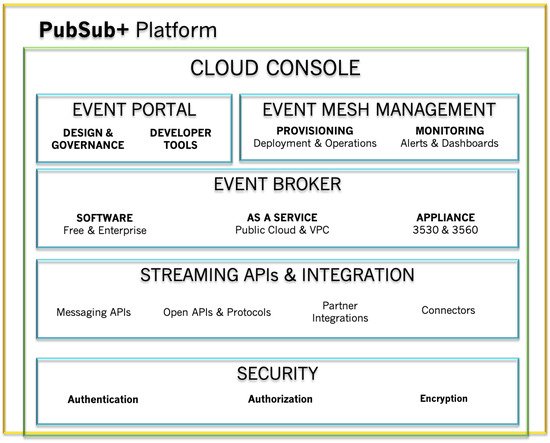 Figure 3. Layout of the internal layers of PubSub+. Adapted from Reference [10].

Sending messages is analogous to worldwide known postal services. The term message, in the technological context, refers to the technology that allows computer systems to share information without the need for direct links or knowledge of each other’s location. In the most basic operations, the sending of messages requires 5 components:
These components are architecturally organized as illustrated in Figure 4.

Apache Kafka is an open-source platform, developed in Java and Scala, for distributed streaming processing. It was originally developed by LinkedIn in order to solve the processing of large amounts of data with low latency, as well as deal with the processing of data in real-time [12]. It was later donated to Apache Software Foundation, its current owner [13].
Apache Kafka is an event streaming platform, aiming to tackle the challenges in implementing publish/subscribing approaches. With its durable and distributed file system, it is able to support millions of events per second, handling data producers and consumers. Kafka’s flexibility and performance enables multiple use cases, from distributing streaming and metrics logging, to the development of event-driven applications, thus being a key component for a data-driven ecosystem [14][15].
This platform runs as a cluster and can contain multiple data centers, allowing efficient communication between data producers and consumers using message-based topics. Each message is made up of its key and value, and a date/time stamp [12][16].
Kafka constitute of four main APIs, the Producer API, the Consumer API, the Streams API, and the Connector API. While the Producer API enables applications to publish messages to Kafka topics, the Consumer API enables the subscription to one or more topics. The Streams API allows the processing of data in Kafka using stream processing paradigms. These two APIs make subscribers able to process the received messages with stream procedures, then sending to other topics. Finally, the Connector API connects applications or data systems to Kafka topics, providing flexibility in building and managing producers and consumers, as well as providing reusable connections between them [17][18].
In Figure 5, the basic architecture of Kafka can be observed. 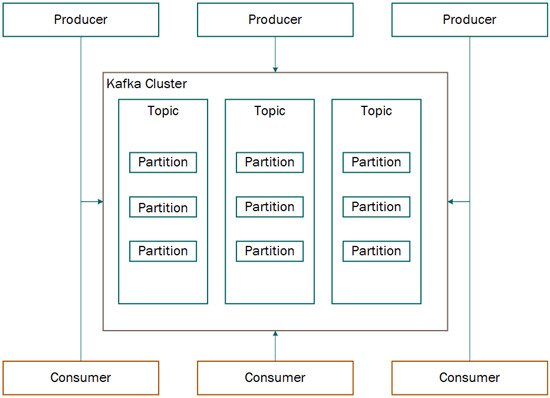 Apache Kafka offers eight different components: Topics, Producers, Consumers, Brokers, Partitions, Replicas, Leaders, and Followers. Hence, the concepts of each of them are presented [15][16]:
Figure 6 showcases a perspective of the relationships between these components [17]. 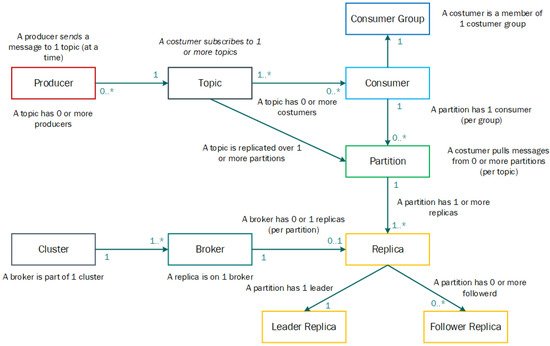 Apache Spark is a Big Data tool that aims to process large datasets in a parallel and distributed way. It extends the MapReduce programming model popularized by Apache Hadoop, enabling the development of large data processing applications. In addition to the extended programming model, Spark also performs much better than Hadoop, reaching in some cases almost 100x higher performance [16].
Another great advantage of Spark is that all components work integrated into the tool itself, such as Spark Streaming, Spark SQL, and GraphX, unlike Hadoop, where it is necessary to use tools that integrate with it but are distributed separately, like Apache Hive. Besides, another important aspect is that it allows programming in three languages: Java, Scala, and Python [19].

Spark has several components for different types of processing, all built on Spark Core, which is the component that provides basic processing functions, such as a map, reduce, filter, and collect. Among these, we highlight those present in Figure 7: 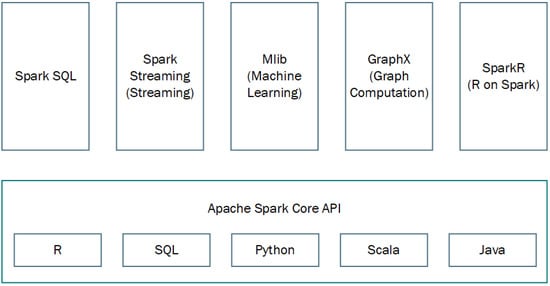