Crimean-Congo hemorrhagic fever virus (CCHFV) is an arthropod-borne virus (arbovirus), mainly transmitted by ticks, belonging to the genus Orthonairovirus (family Nairoviridae, order Bunyavirales). CCHFV causes a potentially severe, or even fatal, human disease, and it is widely distributed in Africa, Asia, eastern Europe and, more recently, in South-western Europe. Until a few years ago, no cases of Crimean-Congo hemorrhagic fever (CCHF) had been reported in western Europe, with the exception of several travel-associated cases.

Crimean Congo Hemorrhagic Fever (CCHF) is the most widely distributed tick-borne viral disease in the world (Africa, Asia, eastern and South-eastern Europe and recently, South-western Europe), and the second one (after dengue) among viral hemorrhagic fevers [1][2][3][4]. The clinical course of the infection varies from asymptomatic to severe and even fatal cases (3–40%) [5][6]. In fact, asymptomatic infections seem common [7], reaching up to 90% cases in some studies from hyperendemic areas [8]. CCHF is transmitted to people by the bites of hard ticks (or crushing of engorged specimens) and/or by direct contact with secretions, fluids or tissues of viraemic animals (slaughtering activity, animal abortion, farmers, animal husbandry, etc.) or with infected humans (blood, secretions and other biological fluids) without protective measures [9][10]. In the sanitary environment, nosocomial outbreaks are well reported [11], including those related to aerosol generation [12]. Nevertheless, the risk of suffering CCHF after exposition to infected biological fluids seems to be lower than the risk of healthcare-related exposure related to other hemorrhagic viruses such as Ebola [13]. There is an increased risk of nosocomial transmission when the disease is not suspected or the prevention measures are not used [14]. Nosocomial transmission of CCHF seems to be common in pregnancy [15]. Vertical transmission has been also reported [16][17], and sexual contact may represent an additional risk of CCHF transmission [18][19]. Laboratory-acquired accidental cases when handling viral material has been also described [9].
The etiological agent is an enveloped, segmented, negative-sense, single-stranded (ss) RNA arbovirus named Crimean-Congo hemorrhagic fever virus (CCHFV). It belongs to the genus Orthonairovirus (family Nairoviridae, order Bunyavirales), within the realm Riboviria (a new megataxonomic taxon rank), according to the most recent classification based on the advances in viral genomic and metagenomic comparison analysis [20][21]. The viral genome consists of three RNA segments: small (S), medium (M) and large (L), which encode the viral nucleoprotein (NP), the glycoprotein precursor (GPC) that yields the structural glycoproteins (GN and GC), and the RNA-dependent RNA polymerase, respectively [22]. CCHFV exhibits higher genetic diversity than other tick-borne viruses, which reveals a wide dispersion of the virus [23]. Since increasing complete genomic sequences of CCHFV are becoming available, new viral classifications are appearing in the last years. Previously classified into six main geographical clades [6], up to nine genetically different clades are currently proposed for CCHFV, according to the phylogenetic analysis of the complete genetic sequence of the S RNA segment of the genome, and based on the geographical origin [24]. Four of them are predominantly distributed in Africa, two in Asia and three in Europe, as follows: Africa-1 (genotype I), Africa-2 (genotype II), Africa-3, (genotype IIIa) and Africa 4 (genotype IIIb); Asia-1 (genotype IVa) and Asia-2 (genotype IVb); Europe-1 (genotype V), Europe-2 (genotype VI) and Europe-3 (genotype VII) [24].
The disease only affects humans, but CCHFV lives in a natural cycle affecting wild mammals, livestock, birds and ticks. Hard ticks are reservoirs of the virus in the nature through transovarial, transstadial and venereal transmission [25]. The cycle of CCHFV is shown in Figure 1. 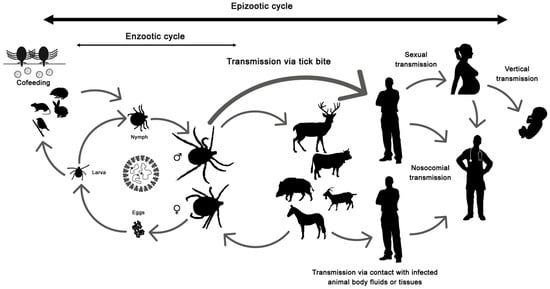 2. What Is the Potential Future Impact of CCHF in Western Europe?

The recent emergence of CCHF in South-western Europe could lead to sporadic case outbreaks being endemic in this region (Spain) or become an epidemic (spreading to new areas). The Greek experience shows the most favorable situation. CCHFV was detected in 1975 in R. bursa ticks from Greek goats but no human cases were reported from this country until 2008 [26][27]. Previously to the confirmation of this autochthonous case, antibodies against the virus were detected in humans [28][29]. Nevertheless, up to date, only one more case has been reported from Greece and, it was imported from Bulgaria [30]. In contrast, the first CCHF human case was reported from Turkey in 2002, and 15 years later more than 11,000 cases had been notified, being endemic in many areas with a fatality rate close to 5% [31][32].
To predict the course of the disease in Spain, the sole western European country with autochthonous confirmed cases, or the incursion in neighboring countries is challenging. As it has been displayed in this review, there are several factors involved in the epidemiology of the CCHF, and presumably a combination of biological and environmental factors is responsible for its incidence [2][33]. The presence of the CCHFV virulent strains, competent vectors, reservoirs (the tick) and amplifiers (vertebrate hosts) of the virus are essential for the emergence of the disease, but a suitable environment is needed. The introduction of immature developmental stages of H. marginatum into western Europe through bird migrations has been reported [34][35][36][37] but local permanent Hyalomma have been only recognized in Portugal, Spain and France [38][35][39]. Tick-infested and/or infected (viraemic) wildlife or livestock to western European countries has been well documented, and even infected ticks [40]. Limited findings of adult H. marginatum and/or Hyalomma rufipes (formerly considered a subspecies of H. marginatum and also vector of CCHFV), most of them attached to horses and all showing negative results for CCHFV, have been recorded in Germany [41][42][43][44], UK [45][46], Austria [47] and The Netherlands [48]. In these cases, non-native immature Hyalomma ticks probably linked to the arrival of migrating birds were transmitted to the local fauna and molted into adults due to favorable conditions (warmer and dryer weather) outside the known distribution areas. Nevertheless, the potential introduction of non-autochthonous adult ticks associated to human travel cannot always be ruled out [42] and it has to also be considered that animals can travel with ticks and become the via of introduction of exotic tick species in new areas, as it occurred with one H. lusitanicum imported into the UK on a dog that had recently returned from Portugal [49]. In addition, other competent vectors, such as R. bursa, broadly distributed in the Mediterranean region [50][51], should be considered.
For the emergence of outbreaks, the tick–vertebrate–tick enzootic cycle of the virus should be established (and data in Spain points in that direction), and the exposition of susceptible people to the infected competent vector and/or to the virus (virulent strains) would be also necessary (the risk is higher in people from rural areas and/or with professions at risk). To date, the ‘hot spot’ of CCHFV infection seems to be more related to a certain area (Central-West and South-western Spain) and, hopefully, more closely associated to wild animals, but the ‘spill-over’ into livestock is a fact, and the demonstrated capacity of the virus for adaptation, among other factors, makes it a dangerous threat in our environment. CCHF, as other vector-borne viral diseases, is affected by dynamic factors such as globalization, climate change, social and cultural changes, alterations of land uses, habitats fragmentation, loss of biodiversity, introduction of exotic species, etc. [52][53][54][55][56][57]. Whether the vector in Spain is H. marginatum or H. lusitanicum is still not clear. Hyalomma ticks are abundant in southern Europe and a trend of their increasing human tick-bites has been observed for more than a decade. Thus, according to our data, the number of Hyalomma spp. detached from humans at San Pedro University Hospital (La Rioja, Spain) has almost doubled if we compare the years 2009–2014 with 2015–2020 (data not shown). All these facts, among others, combined with the different genotypes detected in ticks and humans in different areas from Spain suggest the potential establishment of a CCHFV transmission cycle. Therefore, a greater awareness and surveillance of this threat is needed. Strategies based on a One Health approach are essential for the prevention, contention, and control of the CCHF in western Europe [58]. To improve detection, diagnosis, treatment and prevention approaches under a global and coordinated perspective is essential.
Addendum: After submission of this review, an early release article (not the final version) about the CCHFV genetic sequence corresponding to the fatal case of patient 3 (Badajoz, 2018) from Spain was published online [https://wwwnc.cdc.gov/eid/article/27/4/20-3462_article (released on: 9 March 2021)]. Based on these data, the reassortant S segment was similar to genotype IV and related to a Nigeria strain that differed from the Asia strains of this genotype. Other authors [24] had already included this same S sequence from Spain within a new genotype designated IIIb (Africa-4). To reach a consensus about designation of genotypes, genetic linages and groups is a pending challenge.