Exosomes for Delivery of Biopharmaceuticals

Exosomes as nanosized vesicles are emerging as drug delivery systems for therapeutics owing to their natural origin, their ability to mediate intercellular communication, and their potential to encapsulate various biological molecules such as proteins and nucleic acids within the lipid bilayer membrane or in the lumen. Exosomes contain endogenous components (proteins, lipids, RNA) that could be used to deliver cargoes to target cells, offering an opportunity to diagnose and treat various diseases. Owing to their ability to travel safely in extracellular fluid and to transport cargoes to target cells with high efficacy, exosomes offer enhanced delivery of cargoes in vivo. However, several challenges related to the stabilization of the exosomes, the production of sufficient amounts of exosomes with safety and efficacy, the efficient loading of drugs into exosomes, the clearance of exosomes from circulation, and the transition from the bench scale to clinical production may limit their development and clinical use. For the clinical use of exosomes, it is important to understand the molecular mechanisms behind the transport and function of exosome vesicles.

Over decades, synthetic drug delivery systems such as liposomes, micelles, dendrimers, and polymeric nanoparticles have been exploited to improve the efficacy and therapeutic index (in terms of the pharmacokinetics and pharmacodynamics profiles) of therapeutics, while minimizing the toxicity and drug-related off-target side effects [1][2][3][4]. Many hurdles still exist for synthetic drug delivery systems, including the delivery of drugs to target organs, toxicity owing to the chemical and physical features of the synthetic delivery system, reactions to the host immune system, and activation of an acute hypersensitivity reaction, which can result in discontinuation of treatment in some individuals. The utilization of extracellular vesicles as a natural carrier system to deliver therapeutics can overcome the limitations associated with synthetic drug delivery systems [1][5][6][7].
Extracellular vesicles are differentiated into apoptotic bodies, microvesicles, and exosomes, depending on the intracellular origin and size. Apoptotic bodies contain cellular contents, including deoxyribonucleic acid (DNA), ribonucleic acid (RNA), and histone proteins, with sizes ranging from 50 to 5000 nm and which are formed by membrane blebbing during apoptosis. Microvesicles, also known as microparticles or ectosomes, have sizes ranging from 50 nm to 1000 nm and are formed through fission from plasma membranes. Exosomes are nanosized membrane vesicles with a size range of 30–100 nm, which are secreted by various types of cells [8][9][10][11]. Exosome formation typically involves the formation of endocytic vesicles from the plasma membrane; inward budding of the endosomal vesicle membrane, which results in the multivesicular body (MVB); and the release of exosomes derived from the MVB into the extracellular environment when the MVB fuses with the plasma membrane [12]. The exosome biogenesis, cargo sorting, and vesicle release processes are shown in Figure 1. Owing to their nanoscale dimensions, exosomes have received greater attention in recent years and are considered to be the most promising vehicles for drug delivery to target cells or organ [13]. 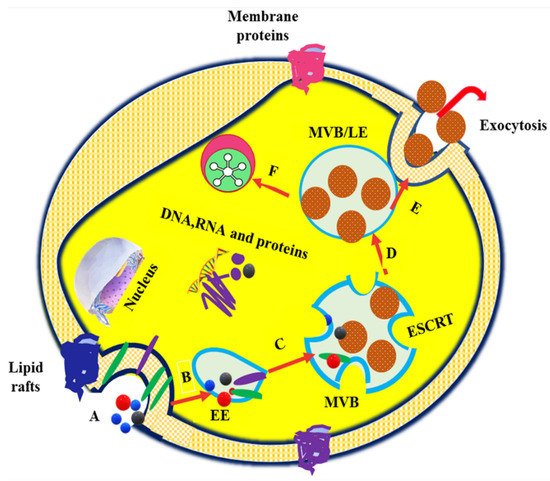 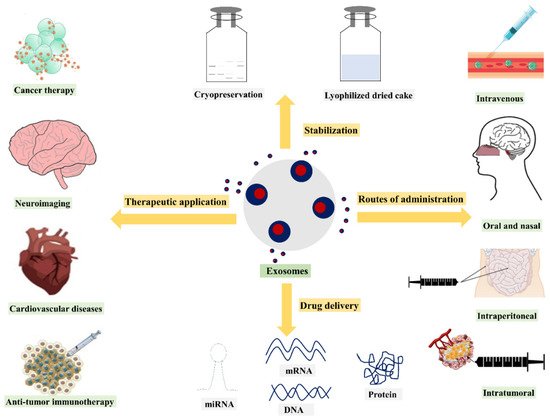 Figure 2. Overview of drug delivery and therapeutic applications of exosomes.

Typically, liposomes and polymeric nanoparticles are the most preferred drug delivery systems for entrapment or encapsulation of drug molecules, and these delivery systems are routinely used to deliver different classes of drug molecules, including anticancer, antifungal, and analgesics molecules. However, the biocompatibility, better stability, long-term safety, and ability to evade the host immune system with long systemic circulating capability and stability remain major concerns [6][12].
Over the past few years, considerable efforts have been made to develop exosomes as novel nanoscale delivery systems. Several characteristics of exosomes, including their biocompatiblity and biodegradability, mean they do not elicit acute immune reactions, have low toxicity, carry the required fusogenic properties, contain low-uptake machinery, have high specificity to the target cells, and are smaller in size, making exosomes attractive nanocarrier drug delivery systems. Further, exosomes have a tendency to accumulate more in tumor tissues than in normal tissue. Moreover, the specificity of the exosome delivery platform can be further enhanced by anchoring exosomes with tumor targeting ligands such as proteins, peptides, or antibodies for specifically targeted drug delivery [41][42]. Table 1 shows the application of exosomes for therapeutic delivery in various pathological conditions.

2.3. Exosomes in Delivery of Other Therapeutic Compounds

The lipid bilayer membrane of the exosome vesicle serves as a natural barrier to protect the degradation of cargo in the blood circulation. However, this lipid bilayer membrane, as well as the endogenous content of exosomes, makes drug loading into exosomes challenging [97]. Generally, active loading and passive methods can be used to sort the drug into the exosomes [98]. Active loading is also known as remote or postdrug loading, in which the drug is incubated with isolated exosomes. Passive drug loading, also termed as the preloading method, involves the secretion of drug-sorted exosomes from a pretreated donor or source cells. This method does not require the addition of drugs into the exosome vesicle. The active loading approach has been reported to be more effective in attaining a higher drug/vesicle ratio owing to its active pumping mechanisms. The postloading approach is more suitable for hydrophobic drugs than hydrophilic drugs [99][100]. Different approaches for drug loading into exosomes are presented in Figure 3, while the advantages and disadvantages of different exosome drug loading approaches are detailed in Table 2.

3.1.1. Incubation of Drugs with Exosomes

This approach is also known as the passive drug loading method, in which both drug and exosomes are incubated together and the drug diffuses into exosomes along the concentration gradient. The drug loading efficiency using this method is directly related to the hydrophobicity of drug molecules because of the potential of hydrophobic drugs to interact with the lipid bilayer membrane of the vesicle [100]. In a study, Dongmel et al. incubated mouse lymphoma-derived exosomes with curcumin in PBS at 22 °C for 5 min, then the mixture was centrifuged based on a different sucrose gradient. The encapsulation of curcumin into exosomes enhanced the solubility, stability, and bioavailability compared to free curcumin [84]. Similarly, Vashisht et al. [101] reported that incubation of curcumin with exosomes resulted in a loading efficiency of 70.46%. Enzyme catalase was also encapsulated into exosomes via incubation in PBS at room temperature for 18 h. However, the low loading capacity is one of the main drawbacks associated with this method [60].

3.1.2. Incubation of Drugs with Donor Cells

In this approach, the targeted exosome donor cells are treated with a drug molecule of interest and the pretreated cells then secrete drug-loaded exosomes [14]. The objective of this approach is for the donor cells to accumulate the bioactive or therapeutic compounds and secrete exosomes that can accommodate the therapeutic compounds. Owing to its untargeted nature, this approach may result in low exosome yield [100]. Pascucci et al. [102] treated and incubated SR4987 mesenchymal stromal cells with a low dose of paclitaxel for 24 h. Then, the cells were washed and reseeded in a new flask containing a fresh medium. After 48 h of culture, the exosomes loaded with paclitaxel were isolated and collected from the cell-conditioned medium. The pretreated donor cells may be exposed to mechanical or biological stimuli such as ultraviolet light, heat, or combination in order to release the drug-loaded exosomes [103][104].

Extrusion is a postloading method that employs a syringe-based lipid extruder for drug loading. Exosomes isolated from the donor cells are mixed with a targeted drug and then loaded into a syringe-based lipid extruder with a 100–400 nm porous membrane at a controlled temperature. During the extrusion, the drug is vigorously mixed with the disrupted exosome membrane [14]. Fuhrmann et al. [99] reported the benefits of the extrusion approach for the drug loading of exosomes. Exosomes derived from MDA-MB231 breast cancer cells were loaded with porphyrin using the extrusion method. Compared to the incubation method, extrusion loading resulted in a greater cytotoxic effect. Further, the extrusion method alters the zeta potential of original exosomes, while increasing the number of extrusions in the intensive extrusion process can contribute to effective drug loading due to the transformation of the vesicle constitution.

Drug loading using the freeze–thaw approach involves incubation of exosomes with a targeted drug at room temperature for a given amount of time and rapid freezing at −80 °C or in liquid nitrogen. Then, the mixture is thawed at room temperature. For better drug encapsulation, freeze–thaw cycles are repeated for at least three cycles. This method has lower drug loading capacity compared to sonication or extrusion approaches. Additionally, this technique can promote the aggregation of exosomes, leading to broad size distribution of the drug-loaded exosomes [60][100][107].

Electroporation utilizes an electric field, which facilitates the movement of drug molecules into the lumen of the exosomes by disturbing the phospholipid bilayer of the exosomes, thereby creating pores on it [108]. During electroporation, drug molecules diffuse through the pores formed on the exosome lipid bilayer membrane; meanwhile, the integrity of the membrane is recovered after the loading. This method is widely used for the loading of large molecules such as nucleotides (siRNA or miRNA) into exosomes [99]. The electroporation technique has low loading capacity owing to RNA aggregation and exosome instability issues. This technique can increase RNA loading into exosomes and enhance the loading of hydrophilic small molecules into exosomes [99].

Membrane permeabilizers and surfactants such as saponin can interact with the cholesterol in the cell membrane and form pores, which leads to exosomal membrane permeability. Compared to the incubation method, the membrane permeability method can enhance the loading efficiency of catalase into exosomes [109]. A previous study showed that an 11-fold increase in drug loading of hydrophilic molecules into exosomes was observed with saponin compared to the passive loading approach without saponin [99][100]. Using this method, the amount of saponin used for drug loading should be optimal and exosomes should be purified after incubation with saponin.
Table 2. Advantages and disadvantages of different exosome drug loading approaches [60][100][109][110][111][112][113][114][115][116].