Border disease virus (BDV) is an important pathogen of sheep, and occasionally goats, reported globally, responsible for congenital disorders, abortion, stillbirths, birth of weak lambs experiencing tremors, abnormal body conformation, hairy fleece, immunosuppression, and increased risk of other infections, incurring substantial yet underestimated economic loss to the livestock industry [1]. The first case of BDV infection was reported in sheep in 1959 from the border regions of England and Wales [2]. Its seroprevalence may vary from 5% to more than 90% among adult sheep, depending on the management of animal husbandry, while mortality depends on the timing of infection, virulence of the infecting strain, and the species or breed of the infected host [3]. Clinical manifestations are usually mild in acutely infected sheep; nevertheless, they may range from asymptomatic to clinically severe. In 1984, a high mortality BDV strain, the Aveyron strain, was isolated from sheep from the Aveyron region of France [4][5]. In 1997, a horizontal BDV outbreak, characterized by high mortality, with clinical signs similar to those of the Aveyron disease, was observed in lambs in a flock in northeast Spain [6]. In 2001, in the Central and Eastern Pyrenees, a fatal BDV epidemic occurred in chamois (Rupicapra pyrenaica pyrenaica) causing a dramatic decrease (over 80%) in the chamois populations that threatened the species with extinction [7][8][9].
BDV belongs to the genus Pestivirus, family Flaviviridae, which comprises four major species, namely bovine viral diarrhea virus type 1 (BVDV-1), type 2 (BVDV-2), classical swine fever virus (CSFV), and border disease virus (BDV), and a growing number of additional putative Pestivirus species from various domestic and wild animals. Recently, a revision of the taxonomy of the genus Pestivirus was proposed, and the original members were reclassified into 11 viral species named from A through K [10][11]. A number of unclassified pestiviruses have been identified in various bovine species (Pestivirus H, atypical ruminant pestivirus, or HoBi-like viruses) and of non-bovine species such as antelope (Pestivirus E, Pronghorn antelope pestivirus), pigs (Pestivirus F, Bungowannah virus; Pestivirus K, atypical porcine pestivirus (APPV)), small ruminants (Pestivirus I, Aydin-like pestivirus), and giraffes (Pestivirus G or Giraffe 1).
Current segregation of BDV field isolates from sheep and goats, and the designation of genotypes by genetic analyses indicate that BDV can be phylogenetically identified into at least eight genotypes, from BDV-1 to BDV-8 [12][13][14][15][16]. Other ovine pestiviruses have been identified that are responsible for BD-like syndromes, indicating a separate evolutionary history that forms distinct genetic groups. In particular, the Tunisian, Tunisian-like, and Aydin-like (Pestivirus I, Turkey) pestiviruses are phylogenetically closer to CSFV than to BDV [17][18][19][20][21]. Recently, a new emerging ovine pestivirus (OVPV), highly divergent from known pestivirus species, was found to be genetically and antigenically closely related to CSFV [22][23], and could be defined as a novel species. The occurrence of BDV infection in domestic and wild animals, mostly in sheep, has been confirmed in different countries world-wide, but most of the data comes from Europe.
Several studies have reported the adaptive plasticity of BDV to cross the species barrier and infect pigs [24][25][26][27] and cattle [28][29][30][31][32][33][34][35][36][37][38]. Moreover, BDV can be transmitted among domesticated species and from domesticated to wild species such as chamois, llama, alpaca, bison, and reindeer [28][39][40][41]. Table 1 shows the segregation of BDV genotypes detected according to their host origin.
Table 1. BDV genotypes and other ruminant pestiviruses according to the host species.
Usually, transmission is due to direct contact with infected animals via the oronasal route. Vertical transmission via the placenta plays an important role in the epidemiology of the disease [54]. Recently, BDV was isolated from Melophagus ovinus, a blood-sucking ectoparasite of sheep, collected from the body surface of sheep in Xinjiang (China), emphasizing the potential role of Melophagus ovinus as a carrier of BDV [55]. Moreover, some authors have identified the European hare (Lepus europaeus) to be a potential wild reservoir of pestivirus for livestock, particularly associated with high mortality outbreaks in Pyrenean chamois [56].
Clinical signs also include the birth of weak lambs and persistent infections (PI) in newborns because fetuses are exposed to the virus with an immature immune system [3][57]. These PI lambs, usually those with the “hairy shaker syndrome” (longer and finer coat), are viremic, antibody negative, and shed virus all their life, becoming the main source of infection in a flock [14][58][59]. To control the spread and prevent the disease, it is important to identify and separate such animals so that they will not be bred or traded, along with implementing biosecurity measures.
Based on their effects on susceptible tissue cultures similar to BVDV, two biotypes can also be distinguished in the BDV species: cytopathogenic (cp), which causes vacuolization and lysis of infected cells, and non-cytopathogenic (ncp), which does not lead to microscopically visible signs of infection [60][61]. The ncp biotype is isolated much more frequently than the cp biotype [51][62]. The emergence of cp strains in PI animals is crucial for the induction of fatal mucosal disease which, however, occurs rarely in sheep [3][63][64][65].
Currently, there are no proven effective vaccines for BDV, although in the USA and some European countries, killed whole-virus vaccines have been produced but are not commercially available [57][66]. Occasionally, attempts have been made to use BVDV vaccines, but they are ineffective because the two viruses are antigenically related but yet distinct and, therefore, do not confer full cross-protection [67].

BDV is an enveloped virus with a spherical shape (40–60 nm), and its genome consists of a single-stranded, positive polarity RNA, composed of approximately 12,300 nucleotides. BDV is easily inactivated by heat, drying, detergents, and UV light [68]. A single open reading frame (ORF) of the BDV genome encodes four structural proteins, the capsid (C) and three envelope glycoproteins (Erns, E1, and E2), and seven to eight non-structural proteins (Npro, p7, NS2–3, NS4A, NS4B, NS5A, and NS5B), which are flanked by 5′ and 3′ large untranslated regions (UTRs) [69][70][71]. Currently, only 15 complete BDV genome sequences are publicly available, representing each genotype, with the exception of BDV-6. The full genome sequence alignment displayed an intra-species similarity of 72.9% to 74.1% and 78.6% to 82.7% at nucleotide and amino acid sequence levels, respectively.
Pestiviruses were designated according to the host species, localization in specific tissues and organs, transmission route and symptoms of the disease, year of collection, and region of origin [72]. Nevertheless, these criteria were not satisfactory because there is extensive cross-reactivity and interspecies transmission among pestiviruses [12]. Subsequently, BDVs were identified by their genetic and antigenic relatedness to other viral strains and by the original host [10][14][39][57][73]. Previously, pestiviruses were phylogenetically characterized by comparing the 5′-UTR, Npro, and E2 gene sequences to classify new virus isolates. The 5′-UTR is the most conserved region of the viral genome, and the non-structural protein, Npro, codes for the N-terminal autoprotease that has no counterpart in other flaviviruses, whereas the E2 protein plays a major role in virus attachment and entry and is also important to induce neutralizing antibody production. To date, genotyping using 5′-UTR, Npro, and E2 sequences has provided consistent results to group isolates using phylogeny [12][15][45][74][75][76], and to define primers for identification and amplification of all pestiviruses by RT-PCR [77][78].

Several epidemiological studies have shown that BDV genotypes can affect a wide range of ungulates, but generally, sheep seem naturally sensitive to pestivirus infection. BDV infection is globally distributed and was reported in different European countries such as Austria [30][32][36][46][79][80], France [4][5][14][41][81], Germany [12][39][44][82][83], Italy [15][16][31][66][76][77][78][79], the Netherlands [24][28][84], Slovakia [85], Spain [1][6][7][9][13][27][48][86][87][88][89][90][91][92][93][94][95], Switzerland [35][51][92][96][97][98][99], and the United Kingdom [3][12][33][72][100].
BDV has also been reported outside of Europe, in Australia [28][70][92], China [101][102], India [103], Japan [25][26], Mexico [37], New Zealand [34][42][72], Tajikistan [104], and the USA [43][65][105]. In North America, in the 1970s, a disease characterized by unthriftiness, hairy fleece, and tremors in fetuses and newborn lambs was reported in northern California [106]. Until then, no sequence data from North American ovine isolates encompassing the entire structural region of a “true BDV” were published, and it was not clear whether true BDV-like viruses existed in this part of the world. Several years later, Sullivan et al. (1997) [43] retrospectively analyzed the entire structural gene coding region of an ovine pestivirus named BD31, originating from the flock in California, and found that this pestivirus was in fact a “true BDV”. This was the only reported detection of BDV in North America until 2012, when another case of BDV infection was reported in California [65]. Similarly, there were no reports on BDV circulation in South America, despite the fact that BD-like syndromes were observed in some places (personal communications). It is likely that BDV is present in other European and non-European countries where the size and density of small ruminant population are sufficient to allow disease circulation. On the other hand, the owners of small ruminant flocks are generally unaware of the disease, mostly because the clinical symptoms are not strongly obvious; therefore, they often go unrecognized.
High seroprevalence from 30% to 98%, depending on the geographical area, was reported. Indeed, a number of epidemiological reports concern only the seroprevalence of BDV infection in many countries, such as Austria [46], Chile [107], Denmark [108], Iran [109], Iraq [110], Ireland [111][112], Israel [3], the Netherlands [84], Peru [113][114], Sweden [115], Switzerland [40][96], the UK [116], and Mediterranean countries such as Algeria [117], Morocco [118], Tunisia [119], and Turkey [19][120]. Nevertheless, only a few cases were confirmed by virus isolation or molecular characterization. Fihri et al. (2019) [118] have reported that genome and antigen absence in RT-PCR of samples of animals from endemic areas could be explained by partial or total destruction of viral proteins during sample handling, shipment, and storage, or could also be due to early death of PI animals.
Serology is an ineffective tool because of the antigenic similarity of BDV with other related pestiviruses and the cross-infection of cattle, sheep, goats, pigs, and of some non-domesticated species. Indeed, BVDV and BDV are frequently detected in cattle, sheep, goats, and pigs, with low species specificity in serological tests. The transmission of pestiviruses between different animal species is often associated with common pasture or other forms of close contact between animals [1][13][14]. In such conditions, the virus can rapidly evolve by introducing mutations in the gene sequence that could lead to emergence and spread of new genetic variants.
Although it was virtually impossible to monitor temporal changes in the presence of genotypes in various countries, antigenic and genetic classification of isolates from different geographical regions is essential to improve knowledge on the epidemiology of BDV. According to the International Committee on Taxonomy of Viruses (ICTV), the pestivirus species are demarcated using a range of criteria, including complete coding nucleotide sequences and deduced amino acid sequence relatedness, antigenic relatedness, and host of origin [10][12][73]. While some independent studies have analyzed the same BDV isolates with consistent results of segregation into genotypes, in other cases, the lack of standardization and the use of different genomic regions have led to conflicting results for some BDV isolates.
The systematic typing of the BDV isolates, based on the 5′-UTR, Npro, and E2 regions, led to the identification of eight phylogenetic groups (BDV-1 to BDV-8) (Figure 1). 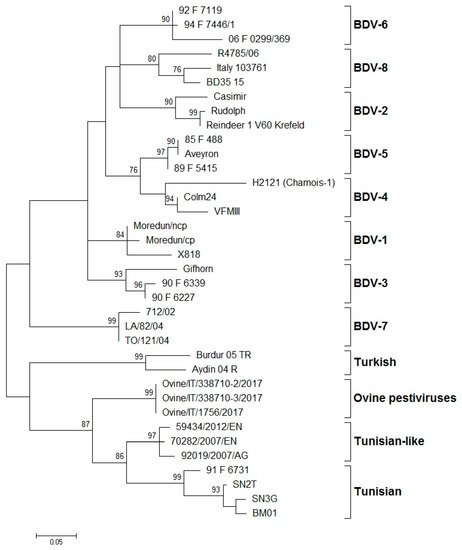