Nicotine is the predominant addictive compound of tobacco and causes the acquisition of dependence through its interactions with nicotinic acetylcholine receptors and various neurotransmitter releases in the central nervous system.

Smoking was the second leading cause of early death and disability in 2015 [1]. It caused approximately 6.4 million deaths, which accounted for 11.5% of all deaths worldwide, and led to 150 million people becoming disabled in 2015 [2]. In developed countries, inhalation of smoking is considered the largest single cause of early death. Smoking is the reason for 20% of all premature deaths and more than one-third of all deaths in men aged 35–69 years [3]. Accumulated evidence suggests that regular smoking can enhance the risk of coronary heart disease, chronic obstructive pulmonary disease, and cancers of the upper aerodigestive tract and lung [4]. Nicotine in tobacco is considered the predominant addictive component, and it causes continued use in humans [5][6][7]. Nicotine-induced addiction is reported to be difficult to quit. More than 80% of attempts to quit fail within a year, and some highly addicted smokers are able to quit smoking only for a few hours [8][9]. Therefore, people are inclined to use tobacco continually despite the harmful consequences. Other psychostimulant drugs, such as morphine, cocaine, and amphetamine, are similar to nicotine: they participate and modulate the brain reward system and motivation though they have different interaction sites and chemical structures [10].

2. CaMKII in Nicotine and Other Psychostimulant-Induced Addiction

CaMKII plays a critical role in the molecular pathway of the reward system in drug addiction, including nicotine dependence, and affects animal responses to drug abuse [11]. Previous investigations demonstrated that 14 or 28 consecutive days of chronic nicotine administration significantly increased CPP scores in conditioning, nicotine withdrawal, as well as relapse phases and CaMKII autophosphorylation levels in the mouse NAc and hippocampal CA1 region [12]. The number of CaMKII autophosphorylation-positive cells in the NAc was also elevated following chronic nicotine administration relative to saline-administered mice [12]. Intracerebroventricular infusion of CaMKII antagonists KN-62 and KN-93 into mice showed impaired nicotine-induced CPP [13]. CaMKIIα heterozygous (+/−) mice failed to show nicotine-induced CPP behavior, and the increased CaMKII activity in the NAc and VTA in wild-type (WT) mice were blocked by the administration of KN-62 [13]. Nicotine induces significant CPP and elevation of CaMKII activity in a concentration-dependent manner. Some studies identified that intraperitoneal injection of nicotine at doses of 0.25 mg/kg and 1.0 mg/kg could not produce nicotine-induced conditioning, whereas that at a dose of 0.5 mg/kg could [14][15]. The concentration at 2 mg/kg induced conditioned place aversion but not CPP in mice [14]. Nicotine concentration lower than 0.1 mg/kg or higher than 1.4 mg/kg could not induce CPP in subcutaneously injected rats [16]. Although different neurochemical outcomes can be observed with different concentrations of nicotine, our previous data suggest that the daily dose of nicotine at 0.5 mg/kg could execute its functions that induce significant CPP, and elevate CaMKII autophosphorylation level as well as the phosphorylation level of its downstream targets in the NAc and hippocampal CA1 region using an immunoblotting technique [12]. Consistent with nicotine, other addictive drugs such as morphine and methamphetamine have a similar effect with regard to the interaction with CaMKII. CaMKII modulates memory retention in an N-methyl-D-aspartate receptor (NMDAR)-dependent manner in morphine-sensitized rats [17]. Reduced activations of CaMKII and cAMP response element-binding protein (CREB) were observed in the morphine self-administered rat NAc following treatment with a TRPV1 antagonist, which is from the transient receptor potential (TRP) cation channel family [18]. The autophosphorylation level of CaMKII in the limbic forebrain was increased in mice administered with morphine, and this upregulation was blocked by the intracerebroventricular infusion of KN-93 [19]. The CaMKII signal is fully involved in the effect of cocaine- and amphetamine-regulated transcript (CART) peptide, which is a neuropeptide associated with brain reward circuits, in the context of cocaine reward [20]. In the NAc, CaMKIIα contributes to the psychomotor effects induced by cocaine [21], reinstatement of cocaine-seeking behaviors [22], and cocaine-induced CPP behaviors [23][24]. CaMKIIα expressed in other brain regions such as the prefrontal cortex (PFC) and amygdala is also correlated with cocaine-induced CPP and cue-induced cocaine-seeking behaviors [23][25]. Furthermore, CaMKIIα autophosphorylation levels were significantly elevated in the PFC, hippocampus, and ventral striatum in rats following ketamine self-administration [26]. Here, we introduce some evidence suggesting that the activities of CaMKII (Table 1) are fully involved in certain brain regions located in the brain reward circuitry. Exposure to the stimulant drugs does not cause addiction immediately; it involves various neuronal adaptations that develop over time.
Table 1. Evidence of CaMKII activity fully involved in the brain regions of circuitry with various drugs of abuse.
These stimulant drugs have been reported to activate and alter the reward circuitry of the brain, and affect synaptic plasticity, learning acquisition, and glutamatergic inputs into the brain neuronal circuit [33][34] (Figure 1). The brain reward circuitry underlying the addiction process is complicated, which mainly includes DA release from DAergic neurons in the VTA of the midbrain and projections to the NAc and PFC region. CaMKIIα autophosphorylation levels were significantly elevated in the PFC of morphine-administered mice [29]. VTA plays a critical role in the initial stimulant drug exposure and causes long-term adaptation in DAergic neurons in the projection regions [35]. Stimulant drug exposure increases DA signaling in the NAc and functionally regulates glutamatergic excitatory projections to the NAc medium spiny neurons (MSNs). Addictive drugs trigger and modulate synaptic plasticity in the brain reward circuitry involved in addiction. Some studies have suggested that alterations in synaptic plasticity at glutamatergic inputs from the cortex to the NAc may be the underlying mechanism in stimulant drug addiction [33][36]. CaMKII is critically associated with the NAc shell DA and glutamatergic inputs involved in synaptic plasticity [22].

Figure 1. Simplified schematic representation of the mouse brain reward circuitry. The scheme of the mesolimbic DAergic projections (purple) of the mouse brain sagittal section emphasizes the predominant afferents that originate in the VTA and input into the NAc as well as the PFC, which are modulated by stimulant drug exposure through CaMKII functions. Glutamatergic inputs (red) that regulate neuronal circuits in response to drug abuse from the PFC to the NAc and from the HP to the VTA through the subiculum are highlighted [37]. Since CaMKIIβ regulates synaptic activity in the Hb in the context of depressive behaviors, it increases glutamatergic inputs onto VTA GABAergic interneurons to inhibit VTA DAergic neurons, thereby decreasing the DA release in the NAc [38][39]. VTA, ventral tegmental area; NAc, nucleus accumbens; PFC, prefrontal cortex; HP, hippocampus; Hb, habenula.

3. ERK in Nicotine and Other Psychostimulant-Induced Addiction

ERK is a serine-threonine protein kinase and a member of the mitogen-activated protein kinase (MAPK) family. It has been reported to play essential roles in cellular proliferation, differentiation, neuronal survival, and synaptic plasticity [40][41]. ERK has two isoforms, ERK1 (p44 MAPK) and ERK2, which are both expressed throughout the mesolimbic system in the mouse brain, including the regions such as the PFC, NAc, amygdala, and VTA [42]. ERK is recruited for signaling transfer in response to extracellular stimulations and the initiated signal cascade. BDNF activates receptor tyrosine kinases (RTKs), which are correlated with adapter protein recruitment such as Shc, and causes the activation of GTPase Ras, serine-threonine kinase Raf, and MAPK-ERK kinase (MEK), which in turn, phosphorylate and activate ERK. Moreover, Ras is also activated through L-type calcium channels and NMDAR. The Ca2+ influx evoked by the electrical and pharmacological activation of these channels and receptors plays a critical role in the signal cascade. Furthermore, dopamine D1 receptors (D1Rs) could also elevate Ca2+ influx and lead to the activation of protein kinase A (PKA) and Raf, which further causes ERK phosphorylation [43]. The phosphorylation of ERK leads to the activation of downstream targets such as Elk-1 transcription factor [44], and CREB through mitogen- and stress-stimulated kinase 1 (MSK1) and ribosomal S6 kinase (RSK) [45][46]. Since ERK is regulated by DAergic and glutamatergic signals, it has been suggested that ERK is involved in psychostimulant-induced addiction and plays a crucial role in the brain reward system and learning process [47]. Here, we provide a simplified schematic representation of the ERK signal cascade involved in psychostimulant-induced addiction (Figure 2). 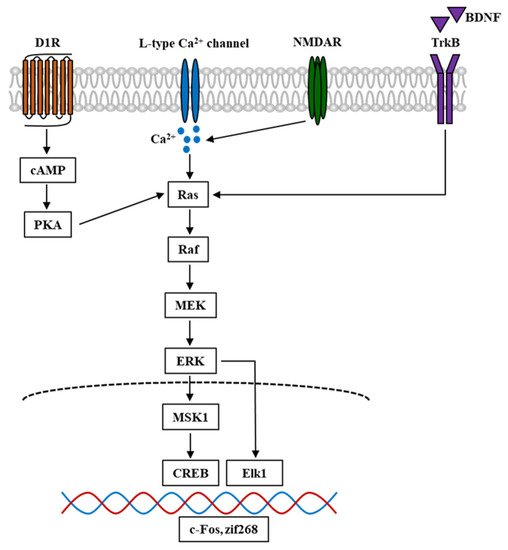