The introduction of pervasive telecommunication devices, in the scope of smart grids (SGs), has accentuated interest in the distribution network, which integrates a huge portion of new grid applications. High impact low probability (HILP) events, such as natural hazards, manmade errors, and cyber-attacks, as well as the inherent fragility of the distribution grid have propelled the development of effective resilience tools and methods for the power distribution network (PDN) to avoid catastrophic infrastructural and economical losses.

Amid desired functionalities for smart grids lays the need for capabilities like: self-healing, high reliability, power quality, and resistance against various disasters and attacks [50]. Resilience represents a promising approach to meet such requirements, by being able to address network circumstances not handled by widely adopted principles of reliability and quality of service.

2.1. From Reliability to Resilience

Reliability is the ability of an item (component or system) to operate under designated operating conditions for a designated period of time or number of cycles, where this ability can be formulated through a probability [66]. In electrical networks, this is equivalent to maintaining the delivery of electric services to customers in the face of routine uncertainty under operating conditions [67]. Metrics like Energy Not Supplied (ENS), Average Customer Curtailment Index (ACCI), System Average Interruption Duration Index (SAIDI), System Average Interruption Frequency Index (SAIFI), Customer Average Interruption Duration Index (CAIDI) are widely used to describe PDN reliability [68][69]. System operators use such indicators to track and enhance the performance of their networks. These indices are further used by system regulators and system operators in service level agreements (SLAs), in order to define penalty thresholds and ensure that the right compensation is paid based on the experienced outages. Reliability metrics are relevant to assess the impact of recurrent events with available historical records, over which maintenance actions are applicable; excluding major hazards such as severe weather events [70]. Some of these metrics were extended to capture more severe events, where metrics like STorm Average Interruption Frequency Index (STAIFI) and STorm Average Interruption Duration Index (STAIDI) are proposed [71]. However, a demonstration was made that these two metrics are not relevant for resilience evaluation because, when used during a storm, they show large deviation that can be even greater than the values of STAIDI and STAIFI [62].
Resilience is “the ability to prepare and plan for, absorb, recover from, or more successfully adapt to actual or potential adverse events” [72]. Unlike reliability, which focuses on the frequency and duration of failures “event-agnostically,” resilience seeks to further track the dynamics and resources of response, adaptability, and ability to restore. This is relevant to HILP hazards where consequences in the system need to be studied with respect to specific events, as each disruption has its distinguishing characteristics [73]. Thus, the fundamental difference resides in the scale, scope, and duration of events handled: resilience targets events with strong impact in a wide geographical area with long duration of outages, while reliability handles local impact in short duration outages [74].
Despite this difference between the two concepts, mainly due to events each of them tackles, they remain closely related because enhancing resilience or reliability may require the same strategies, with resilience being more general, confirming that being resilient typically encompasses being reliable, but not vice versa [75].

2.2. Resilience and QoS in ICT Networks

ICT networks traditionally rely on QoS metrics to define SLAs [76]. These metrics consisting of delay, jitter, bandwidth, packet loss, bit error rate, and traffic load are performance measures that do not give a comprehensive view of network state. Therefore, other complementary metrics are adopted in SLAs in order to better quantify the system state, namely availability metrics.
In the initial introduction of Quality of Resilience (QoR) in [77], QoS is divided into short-term quality parameters referred to by availability, and long-term quality parameters grouped under QoR. In other words, resilience is considered as an aspect of QoS, as latency or packet loss. However, QoR is presented in [78] as a concept-treating quality at different levels of the Open Systems Interconnection model (OSI-model), including the network level which corresponds to traditional QoS. Figure 1 shows how QoR extends QoS to include other types of quality: Quality of Experience (QoE), Quality of Delivery (QoD), and Quality of Protection (QoP). This is done by considering the additional metrics from each level. QoR is used as a transverse evaluation for all aforementioned qualities. This is done by considering the metrics that describe different resilience stages. From a high-level perspective, we can say that QoR is a shift from client-centric evaluation, conducted using QoS, toward a more general framework that includes the system potential in terms of resources, organizational processes, and humans.

Figure 1. OSI-based classification of quality in relation with resilience [78].
Once again, in both cases above, the need for resilience stems from harsh large-scale events imposing consideration of stress in the system and recovery strategies. Then, despite the slight divergence in terminology that is still the case today, the two concepts go beyond the traditional QoS evaluation, to capture both requirements of customers and enhancement strategies of operators. Nevertheless, the idea that resilience takes in QoS is gaining more attention [75], suggesting that a system cannot be resilient if it does not offer acceptable QoS, but providing acceptable QoS is not the only requirement for a network to be resilient.

The panoply of methods proposed for qualitative evaluation of resilience in electric power networks [20][21][22][23][24][25] is not enough to convince critical infrastructure operators in general, and utilities in particular, to adopt the resilience-based design. They are unable to systematically discover hidden vulnerabilities and critical elements [79]. To overcome this, stakeholders need to have a closer, more tangible grasp of resilience, using quantitative analyses which gained huge momentum in recent years. Most of these analyses are performance-based, where performance is defined in various ways in order to fit different participants and study objectives [80]. The fact that almost all works selected in this paper happen to belong to this high-level method of quantification comes to stress the consensus in progress toward the adaptation of this method as a tool for resilience quantification.
In Figure 2, we propose four aspects based on which the state-of-the-art papers on resilience metrics for smart power distribution network could be classified, evaluated, and compared. Some of these aspects will be further elaborated in the later sections. For instance, in Section V we classify the papers based on extreme event handled, performance calculation method, and both type and computational method of resilience metrics. Each of these four aspects is explained in detail below. 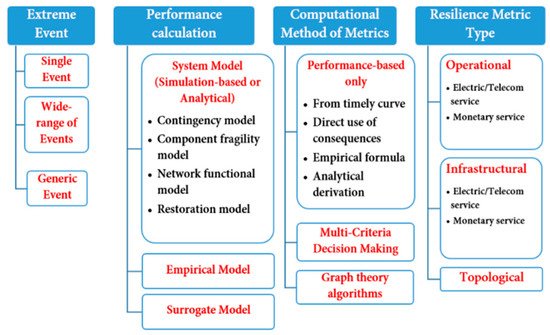 Four broad classes of resilience metrics are generally adopted: (i) average performance metrics, (ii) integrated multi-phase metrics, (iii) time-dependent metrics, and (iv) probability-based metrics [81]. In the case of a HILP event, probability distributions are often not available, whereas the other three classes depend on the measure of performance in the network. Thus, a reasonable statement is that an ideal evaluation of resilience may consist of a complete tracking of the time-dependent performance function P(t). This way, network operators can have the value of performance at any instant for the complete event duration. However, despite the apparent dependence of P(t) in time, performance function does not necessarily change with time if it is not for the extreme event which hits the system. In other words, performance function depends on many parameters including hazard intensity, system preparedness, resilience strategies in hand, and priority decisions made, all of which cause network state to change. This sends back the problem of resilience multi-dimensionality, which makes developing closed form derivation for resilience function challenging and hitherto out of reach. Performance-based methods try to include all previously mentioned parameters and additional ones into a temporal curve describing the performance evolution of the network. It can be said that many resilience features are embedded in a performance curve as shown in Figure 3, because the construction of such a graph takes into consideration all factors intervening during a catastrophic contingency.

Figure 3. Performance curve for resilience quantification.
A salient advantage of such an approach is to have the temporal follow-up of network state which allows decision-makers to be in a best-informed posture. Four main phases can be distinguished, among which some can be further detailed into sub-phases:
Many works [13][27][45][63] explore each of these phases with slightly different denominations. Here a generalizing description is adopted where the four above-mentioned phases are considered, with mitigation and recovery divided each into two sub-phases in order to better explain all involved mechanisms. Resilience quantitative frameworks can be assessed based on phases they handle [64]. The more phases taken into consideration, the better the insight into system operation during extreme events. Furthermore, the layout can be used to seek answers for the following questions: When is resilience evaluation conducted and for which reason?
Figure 4 distinguishes time instants at which resilience quantification can be conducted, and objectives of this evaluation. The former here orients/guides/steers the latter, because for example, an operator who aims to plan investments for his network will most likely opt for pre-event evaluation, while another who only wants to see the impact induced by a contingency in his network may adopt post-recovery damage evaluation. Knowing “why” resilience is to be evaluated serves as a guideline to choose “when” it should be done. Without loss of generality, resilience evaluation can be induced from the performance curve in Figure 3; so it is important to know when system operators can get such a representation. Three options are available: 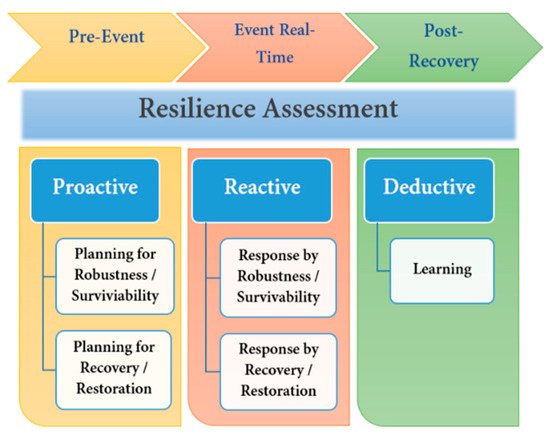 Figure 4. Options for resilience evaluation timing and associated objectives.
Once metrics are computed, they can be used to make informed decisions about resilience strategies to implement in order to minimize the impact and speed up recovery. In other words, the output of this phase is planning schemes which enhance robustness, survivability, restoration, and recovery of the system that can be summarized in the concept of resilience. The prominent advantage of a proactive evaluation is the ability to look-forward that allows foreseeing what is coming. On the other hand, the large number of possible contingency scenarios and little relevant data cause low-confidence results.
Proactive approaches are dominant in resilience engineering, especially when considering the fact that in some cases the reactive approach is subsumed therein. The combination of the two is simply referred to as proactive approaches.