Malaysia is a rapidly developing economy experiencing a nutrition transition. It suffers from a double burden of over- and undernutrition, making it essential to understand diet quality in the population. In this scoping review, we have collated the existing literature on Malaysian diet quality, including factors that influence it, and the association between diet quality and health outcomes across the lifespan of Malaysians. Overall, diet quality was poor in all age groups studied. The Healthy Eating Index (HEI) and its iterations were predominantly used in urban and clinical settings to evaluate diet-chronic disease relationships. These indices were significantly associated with cardio-metabolic and disease risks in adults. The Diet Diversity Score (DDS) and Food Variety Score (FVS) were used to gauge diet quality in maternal and child nutrition studies and were associated with appropriate growth and caloric intake.

Malaysia is an upper-middle-income country and is an open economy with a high trade-to-gross-domestic-product (GDP) ratio [1]. As Malaysia converges with advanced economies, challenges remain in achieving equitable education, health, nutrition, and social protection outcomes [1]. Rapid development and globalization have also spurred a nutritional transition with an overall shift away from the traditional and more globalized dietary patterns [2][3]. This dietary shift is paralleled by the double burden of obesity and undernutrition, with the former being more generalized in prevalence across the nation and the latter concentrating in segments of under-developed and low-income areas, especially among children [4]. The scale of the prevalence of overweight status and obesity, which has risen unabated over the last two decades, with no clear urban-rural divide, is a cause for national concern [3][5]. This public health concern has prompted the development of the National Strategic Plan for Non-communicable Diseases (2015–2025) with specific targets to halt obesity and diabetes [6]. In addition to this, stunting in children is still a matter of concern in Malaysia [4][7]. Among the key priority areas identified for the development of human capital in Malaysia are nutritional interventions to reduce childhood stunting and adequate social welfare protection [1][2]. Thus, evaluating diet quality using a life course approach is of prime importance in this rapidly transitioning society to understand and optimize the population’s diet.
Nutrition research aims to optimize diets to promote health and prevent diseases [8][9], as poor diet quality is globally recognized as a crucial, yet modifiable risk of adverse health outcomes [10]. Diet quality refers to the extent to which an individual’s diet conforms to the principles of being balanced, healthy, and diversified and provides the essential nutrients needed for a healthy life [11][12][13]. Diet quality functions as a risk assessment tool to predict outcomes from various chronic diseases, including cardiovascular diseases, diabetes, obesity, and cancer risk, both in children and adults [11][14][15]. Practical and valid metrics support efforts to elucidate associations between diet and health outcomes and utilize the understanding to intervene and optimize health to measure diet quality [11].
Diet quality is challenging to quantify [14] and involves evaluating one or more of the following three domains, depending on the objectives and context of usage: (a) nutrient adequacy, (b) food variety and diversity, and (c) moderation of food groups and nutrients [16]. Nutrient adequacy refers to the consumption of appropriate amounts of energy and all essential macro- and micronutrients suited to a person’s age, sex, and health status. Diversity refers to the variety of food groups included in a diet. Finally, moderation refers to consuming food groups within their limits, as an excess may be unhealthy [17]. Implicit in this measurement is that diet quality defines the agreement between individual eating behavior and healthy eating as defined by the existing national dietary guidelines [12][13]. The subtle variations in the measurement of diet quality indicators suggest that diet quality metrics/indices are best customized to a population depending on their nutritional requirements, cultural acceptability, and the population’s trajectory in the nutritional transition. This poses an additional challenge to countries like Malaysia that have to be mindful of the existing issue of undernutrition while the prevalence of over-nutrition and its consequences continues to grow.
Several diet quality metrics that vary both in their foundation and dietary components evaluated are used in nutrition research. These fall under three major categories: (a) nutrient-based indicators, (b) food/food group-based diversity indicators, and (c) combination indexes [12][18].
The four most globally used and extensively validated indices are the Healthy Eating Index (HEI), the Healthy Diet Indicator (HDI), the Diet Quality Index (DQI), and the Mediterranean Diet Score (MDS) [12] and their adaptations. Some of these scores are tied to national dietary guidelines and therefore are specific to the country guidelines they are calibrated to. The HEI assesses how well a diet aligns with the key recommendations of Dietary Guidelines for Americans [19]. McCullough et al. [20] created an alternative to the HEI to improve the original algorithm. This 9-component Alternate Healthy Eating Index (AHEI) focuses on foods and nutrients, and the prevention of chronic disease risks [12]. These indices have been adapted to suit country-specific dietary guidelines, and a modified version of the HEI is available for Malaysia [21][22]. Diet quality indices have also been specifically developed and validated for Malaysia, based on the Malaysian Dietary Guidelines [23].
Some dietary scores facilitate cross-country comparisons and therefore are intended to be used without modifying the items or scoring across countries. Globally calibrated diet quality indices include the Healthy Diet Indicator (HDI), the Diet Quality Indicator International (DQI-I), the Food Variety Score (FVS), the Diet Diversity Score (DDS), and the Mediterranean Diet Score (MDS). The HDI is used worldwide and is based on adherence to the World Health Organization’s (WHO) nutrition guidelines, while the DQI-I was created in 2003 to enable cross-cultural diet quality comparisons [24]. The MDS comprises 11 components and is based on epidemiological findings of a beneficial diet on cardiovascular health [25][26]. However, in low-resource settings with undernutrition, the FVS and DDS are more straightforward measures that can be used without the need for a food composition database [27][28]. The FVS is defined as the count of food items consumed over 24 h, from a possible total of 45 items [27]. The DDS is used to measure the diversity within and between food groups by a simple food group count [28]. Thus, the FVS and DDS can be quick screeners of diet quality in populations at risk for undernutrition.
Malaysia has carried out several studies on diet quality and its health effects across various age groups and settings. These efforts remain disconnected, and an evaluation of what is known and what remains to be studied will be vital to support future work in the area. Thus, we have reviewed the existing work done within Malaysia, documenting diet quality across the life course, factors associated with diet quality, and their impact on health outcomes.

Covidence software was used to facilitate the study selection process [29]. Records yielded from the database searches were imported to Covidence. Duplicate records were removed before titles and abstracts of articles were screened to gauge study eligibility. In the final step, full-text articles were reviewed in accordance with the review’s inclusion and exclusion criteria. Screening of all studies was independently conducted by two researchers (S.A.L. and S.M.T.) at both stages. We also performed a manual search of the references listed in the included studies. A third researcher (A.R.) resolved conflicts in agreement, if any, between S.A.L. and S.M.T. Pre-determined eligibility criteria were used to screen for peer-reviewed articles that had explored any aspects of diet quality.

The Malaysian Healthy Eating Index (M-HEI) was the most commonly used diet quality measure (n = 9) in Malaysia (Figure 1), followed by the DDS (n = 8) and FVS (n = 4). A detailed description of the measures is presented in Supplementary Table S4. 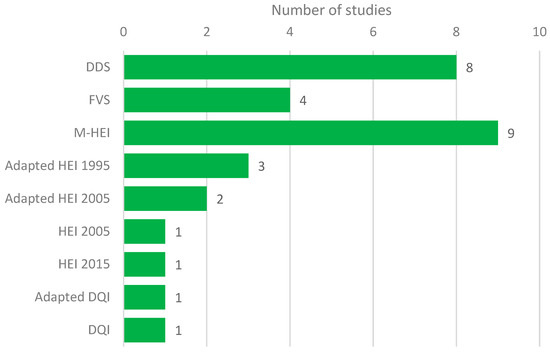 Figure 1. Distribution of the studies according to diet quality measures used.
The diet quality of rural children was poor with a poor score for vegetables, fruits, dairy, and overall food variety [30]. More than two-thirds of OA children (73.8% of males and 59.1% of females) had poor diet quality [31]. Poor diet quality among households with individual food insecurity, child hunger, and household insecurity measured 81%, 77.8%, and 63.8%, respectively. Diet quality remained poor in OA children a decade later, with 92.1% in the middle tertiles of the DDS or lower [32].
A study of the urban Malaysian community showed the paradox of a high prevalence of low-medium FVS (67.7%) concurrently with a high DDS (88.4%), likely due to households consistently purchasing familiar yet cheaper foods [33]. The diet quality of adult urban Malaysians was found to need improvement (average M-HEI score: 61.3 ± 10.9) [34]. Interestingly, while a trial reported higher diet quality with the intervention meal, the group remained in the “needs improvement category” [35], and a similar finding was reported earlier in another intervention conducted among adult men [36]. Karppaya and colleagues [37] reported a mean DDS score of 9.5 ± 4.2 in an OA community, with similar scores between genders.
More than 55% of urban women were found to have diet quality that “needs improvement”, with Indian women having the lowest HEI score (75.7 ± 8.1) among the ethnic groups [38], while OA women were found to have poor diet quality and an even lower score, of 45.3 ± 7.5 [21][22]. However, diet quality status in adult women was associated with food security status rather than ethnicity alone in several other studies. Food-secure women have been reported to have higher diet quality, assessed with the DDS and M-HEI, compared to women experiencing food insecurity and child hunger [21][22][39][40][41]. The association between food security and diet quality was also documented in women with children [42][43][44][45]. The only study that reported on pregnant women found lower M-HEI scores throughout their pregnancy (ranging between 52.7–56.1%) [46].
Surprisingly, older adults (M-HEI score: 70.2 ± 12.0) had significantly better diet quality than the younger age group (59.7 ± 9.9) [34]. This finding appears to be consistent with a recent study reporting an M-HEI score of 66.9 ± 9.9 in women above 50 [47]. Nohan et al. [48] also reported that almost 75% of the older adults in their study had good diet quality.
Diet quality assessments in specific groups also have been reported in the past. A recent study reported that a significant proportion of intellectually disabled men (60%) were required to improve their dietary intake, and none had good diet quality [49]. Ng et al. [50] reported a mean total HEI score of 63.9 ± 8.8 in women with breast cancer. This was consistent with an earlier study that found a total HEI score of 64.8 ± 9.7 and 64.3 ± 9.3 among pre-and postmenopausal breast cancer cases, respectively [51].
Tiew and colleagues [52] reported a mean Food Group Score (FGS) of 4.1 ± 0.8 and Serving Score (SS) of 12.8 ± 3.5 among adults with diabetes. Interestingly, while this study found that one-third of the patients had a perfect FGS, only 1.8% were identified with perfect SS. The majority of people with diabetes (76.8%) needed to improve their diet quality [53]. A similar finding was reported by Siddiqui et al. [54], where diabetic patients achieved a total M-HEI score of 58.1 ± 9.1. However, pre-diabetic individuals in this study may have been at greater risk of having poor diet quality as this group only achieved a composite M-HEI score of 55.9 ± 7.2.

In this scoping review, we reviewed studies concerned with Malaysian diet quality. The studies revealed an overall scope for improvement in diet quality for the population. Additionally, we demonstrated the validity of food variety-based and nutrient-based scores for specific settings and objectives in the Malaysian context. We also outlined the research gaps and scope for future investigations in this area.