Polydimethylsiloxane (PDMS) is the basis of the vast majority of silicone products that have found use in almost all areas of human activity, from cosmetics to the nuclear or aerospace industry. After 80 years from the first direct synthesis of silicones (2020), they still enjoy great interest, both scientific and applicative, being extremely versatile. Polydimethylsiloxane (PDMS), in spite of its well-defined helical structure, is an amorphous fluid even at extremely high molecular weights. The cause of this behavior is the high flexibility of the siloxane backbone and the lack of intermolecular interactions attributed to the presence of methyl groups. These make PDMS incompatible with almost any organic or inorganic component leading to phase separation in copolymers and blends. The material itself is hydrophobic and permeable to gases, with low viscosity, solubility parameters, low glass transition temperature and very low surface tension. This makes the silicones spread very easily, distinguished by their ability to form temporary films and thin coatings to more substantial durable films or with self-leveling and adhesive capacities as stand-alone sheets of different sizes and thickness, from a few micrometers to a few millimeters. One application that is based on this property is the formation of free standing, flexible submicrometric films of interest as active elements in certain devices, such as dielectric elastomer transducers (DETs). Dielectric elastomers (DEs), three-dimensional networks of long and flexible polymer chains, are soft active materials showing promising properties that mimic natural muscle for use in advanced robotics and smart prosthetics, as well as in haptic and microfluidic devices. They enjoy great interest due to their inherent flexibility, large strain, high efficiency, high energy density, and fast response of the material. In addition, some of their properties can be adjusted as required by chemical, physical or combined approaches. 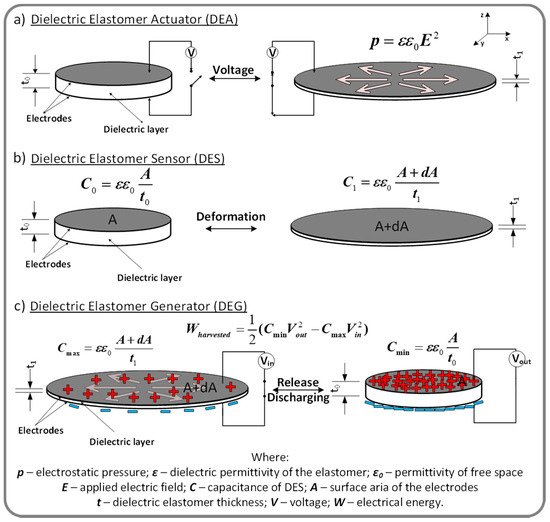 Figure 1. The principle of operation of dielectric elastomer transducers (DETs) as: (a) actuators (DEA); (b) sensor (DES); (c) generator (DEG).
Dielectric elastomers can also be used for measuring mechanical deformations, such as pressure, strain, shear and torsion acting as soft capacitive sensors (dielectric elastomer sensor, Figure 1b) [5][6]. Another important functionality of DEs, is their ability to work as generators by converting mechanical to electrical energy (Figure 1c) [7].
Since the discovery of the basic principles in 1990 and the first application of electroactive elastomers in the field of robotics, followed by the first use of DEGs for wave energy conversion (WEC) in 2001 and the first fully elastomeric WEC in 2012 [8] to the present, the field is constantly expanding and developing. The electromechanical transducers based on dielectric elastomers (DETs) show many benefits in comparison with traditional piezoelectric, magnetic, pneumatic or hydraulic transducers that are in general bulky, rigid, expensive and often unsuitable due to their incompatibility with soft or complex-shaped objects. The thin, homogeneous, soft and flexible polymer film is the key to the low voltage operation of multilayer DETs to qualify as artificial muscles.
Although such DETs are of interest for a growing number of applications (adjustable optics, microfluidics, soft robotics and haptic devices) [9][10][11][12][13] and technically feasible, there are still some challenges to be addressed: rapid and reproducible production of elastomeric membranes, the ability to self-repair defects of a certain level, realization and deposition of extensible electrodes, ensuring their good compliance with the dielectric film, et cetera [14]. Thus, although the dielectric is the active element of a DEG, the electrodes are also at the core of the device’s performance: they must be conductive, soft and sustain large deformations while remaining conductive, and they must also be able to do so for millions of cycles. The main requirements for dielectric elastomers consist mainly of large actuation strain, low modulus and low elastic losses, high dielectric strength, fast response, low weight, low costs, recyclability, et cetera [15].

Of the types of elastomers tested for DETs purpose over time, only silicones and acrylics have proven to be competitive. Silicones meet most of these requirements, being primarily highly compliant and capable of large deformations due to their high flexibility [16], having shear modulus values between 100 kPa and 3 MPa, and low loss tangent, tan σ << 0.001 [17]. In addition, they can operate in a wide temperature range, are easy to handle and process in the form of films of different thicknesses [18][19]. Silicones also have advantages in terms of resistance to the environment (humidity, ozone, oxygen, sunlight, marine environment, etc.) and weathering (Table 1), but they have the drawback that they are not biodegradable, while recycling processes are complicated [20].
Table 1. Important weather resistances of main classes of dielectric elastomers; where: E—excellent; G—Good; F—Fair; P—Poor [21][22].
Based on the above and due to their appropriate mechanical properties (low modulus and high elongation), silicones are among the most used polymers in DETs. Their properties can be easily tuned by the preparation strategy: proper choice of the molecular mass and microstructure of the polymer matrix; adding of more or less active fillers, whether these are incorporated in the polymeric matrix (ex situ) or generated in situ; crosslinking mode (through the side or ending functional groups) or mechanism (condensation, radicalic or by hydrosilylation). Thus, it was possible to improve the performance of silicone elastomers by manipulating parameters, such as the molecular weight of the polymer and the crosslinking pattern, without other additions or chemical changes. Polydimethylsiloxanes with molecular weights from several tens of thousands to over one million Da have been obtained [23]. They were crosslinked by different chemical pathways: peroxide, condensation, hydrosilylation, dehydrocoupling and thiol-ene addition (Figure 2) [24] obtaining soft to ultra-soft silicones, with Young’s moduli generally less than 0.1 MPa and elongation at break of over 1000%, and good values for elastic recovery and stress decay [23]. 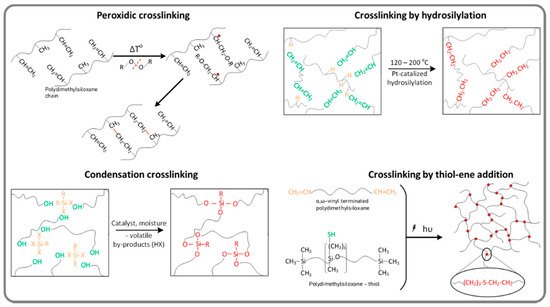 Figure 2. Approaches for increasing the performance of dielectric elastomers using different cross-linking pathways: peroxide, condensation, hydrosilylation, dehydrocoupling, thiol-ene addition [24].
By properly designing polysiloxanes in terms of structure, molecular weight and crosslinking pattern, it was found that a silicone elastomer based on PDMS (Mw = 80,000 Da) containing 8.4 mol.% vinyl groups crosslinked by thiol-ene addition with a PDMS (Mw = 35,000 Da) containing 16.5 mol.% SH group along the chain, without other additions, incorporated in a DEA developed a lateral actuation of 15% when applying an electric field E = 20 MV/m (Figure 3a) [24]. A DEG built from three circular layers of common silicone with a diameter of 120 mm and coaxial circular stretchable electrodes of 60 mm diameter also based on silicone but embedding 25 wt.% carbon black was able, at 200% strain, to harvest almost 1 mJ (Figure 3b) [25]. An energy harvesting efficiency of η = 8.84% was achieved with a DEG based on silicone filled with 2 wt.% TiO2 nanotubes and carbon black electrodes (Figure 3c) [26]. By incorporating carbon black [27] or carbon nanotubes within the PDMS matrix, stretchable electrodes were obtained, several conductivity performances of these being showed in Figure 3d. 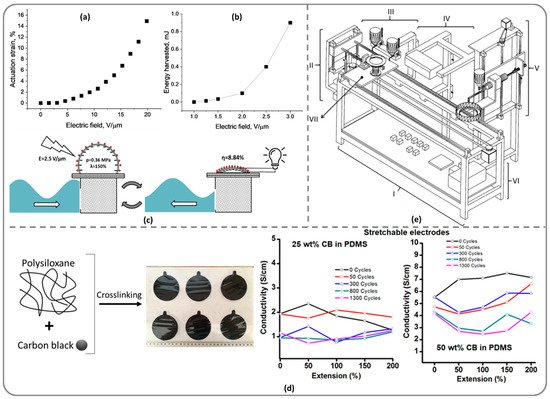