2021-05-24 13:49:59
This paper investigates the trends in advanced technology-based agricultural studies, mainly focusing on IoT and UAV applications. The paper is interesting and generally well-written.
2000/2000
×
Table of Contents
Hide
Topic review

In order to increase agricultural production with limited resources, major technological advancements have been implemented throughout much of human history. However, a growing population along with climate change always poses a threat between food supply and demand. The world’s population is estimated to reach 9 billion by 2050, which is about a twenty-five percent increase over the current population [1]. However, population growth will be larger, mostly in emerging countries such as Mexico, India, China, and others [2]. Additionally, the urbanization trend is expected to accelerate in developing countries by 2050. Currently, 49% of the world’s population lives in urban areas, which is expected to increase to 70% by 2050 [3]. Besides, since the living standard is expected to increase in the future, it will further increase food demand, particularly in emerging nations. Due to the continuous increase in the global population, we should be more cautious regarding nutritional values and food quality. To meet future food demands, food production should be doubled by 2050 [4][5]. In particular, grain crops and meat production should be increased from 2.1 billion tons to 3 billion tons, and 200 million tons to 470 million tons, respectively, to meet the world food demand by 2050 [6][7].
Indeed, crops such as rubber, cotton, and chewing gum play a crucial role in various countries’ economies. In addition, crop-based bioenergy markets have recently begun to grow. Even ten years ago, 110 million tons of coarse grains (about 10% of world production) were used for ethanol production alone [7][8]. Food security is also threatened by the increased use of food crops for biofuel production, bioenergy, and other industrial uses. These biofuel/bioenergy demands have put further pressure on already scarce agricultural resources. Unfortunately, due to different constraints (e.g., temperature, terrain, and soil and water qualities), only a limited part of the Earth’s surface is appropriate for agricultural use. Moreover, the existing farming land is further narrowed because of economic and political factors, including population growth, climate, and land-use patterns, while the rapid urbanization process is continuously putting pressure on the availability of arable land. Thus, since arable land is decreasing, these factors would be major threats to crop production. Additionally, crop production is already reduced due to a lack of arable land over the last few decades [8]. For example, in 1991, arable land for the crop production was 19.5 million square miles, which was 39.47% of the total agricultural land area, but that area was decreased to 18.6 million square miles in 2013, which is about 37.73% of the total agricultural land area of the world and is expected to decrease in the future [9]. Consequently, a larger gap between the demand and supply of food is observed, which becomes apparent and shocking over time.
Further, the quality and quantity of crops rely on climate, topography, and soil characteristics. Major features such as available nutrients, soil types, soil health, insect resistance, and quality and quantity of irrigation determine its adaptability and the quality of certain crops. In most cases, crop characteristics and yields may vary within the same farm plot. Therefore, site-specific analysis or the precision farming technique is required to obtain optimal yields. Besides increasing crop production, growers and farmers need to practice multiple cropping, mixed cropping, year-round cropping, or intensive cropping. To meet these needs, growers and farmers require the latest/advanced technologies and services-based techniques to produce more foods with limited land and resources. Farmers/growers must monitor their croplands at a near to real-time scale to apply necessary measures to enhance crop production. For this reason, there is a need for smart agriculture.
Currently, farmers and growers have to spend 70% of their time monitoring and understanding the status of the crops rather than performing actual farm work [10]. Hence, precise and advanced technologies are required to advance the agricultural sector. Additionally, for sustainable agriculture, the effects of climatic and environmental conditions should be minimal. The Internet of Things (IoT) gives producers better results because of “on-site monitoring” capabilities, allowing them to monitor farms remotely. Wireless sensors help to continuously monitor crops with greater accuracy, and most importantly, they can identify issues at the early growth stages of crops/plants. The latest technologies and tools enhance agricultural operations during the crop growth stages, such as crop harvesting, the transportation of cropping materials, and storage conditions [10]. During these developmental stages of crops, advanced technology, such as the IoT, plays a significant role, making the process efficient for the growers. Currently, several tools, including harvesters, robot weeders, unmanned aerial vehicles (UAVs), and other automatic machines, are beneficial to the growers for crop monitoring. For this purpose, several sensors are installed in the field. These sensors rapidly provide information regarding soil health and crop health, and associated factors. The IoT is a part of the latest agricultural technology, which helps collect data from the field.
Many institutions and industries are now developing new technologies, such as the IoT, for effective farm management. These technologies help obtain the best results and improvements in their fields and minimize associated inefficiencies [5][11][12][13][14]. The latest technology is very affordable to the farmers, although little information related to the IoT is available for them. Despite this, for sustainable agriculture, the IoT is considered an emerging technology and better adaptable by farmers to obtain better crop productions. These new technologies, such as the IoT, provide many improvements in necessary infrastructures, such as the use of cellular devices by internet technology and the scope of various services, including information related to the cloud-based sensors, automation of different farming operations, and making effective decisions. The agriculture sector, which is the leading economic industry, and the backbone of the country, will be revolutionized by the IoT [5][15]. Figure 1 presents information related to the primary drivers, which require this advanced technology. Moreover, it demonstrates the significant challenges associated with this technology and its implementation in advanced agriculture, such as a fragmented market, poor connectivity and coverage, investment, lack of new appropriate technology, lack of skilled manpower, and others. 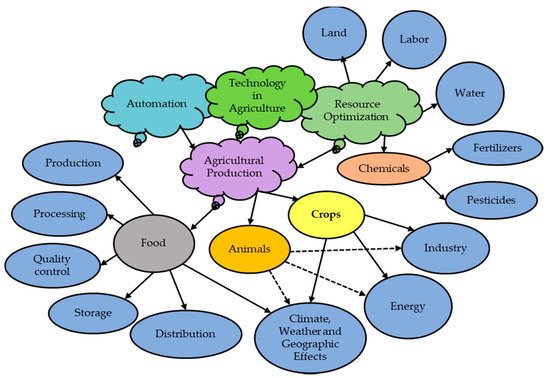 Figure 1. Key driving factors associated with the technology in advanced agriculture. This list is an effort to compile most of the activities/factors associated with agriculture, which require advanced technology. It is not meant to be a comprehensive list as many more driving factors/activities need advanced technology.
For the improvement of the agriculture sector, scientists, researchers, and engineers are developing many new technologies and methods to monitor crops and related field data. Several manufacturing agencies are approaching to provide various devices/tools such as robots, IoT sensors, and UAVs to collect real-time data at much higher resolutions. For this purpose, federal and non-federal agencies are working together to enhance the IoT applications to sustain food safety and security [16][17][18][19].
There are ample efforts to emphasize the IoT’s role in the farming sector [20][21]. Most of the previously published data either did not deliver enough insights or only focused on various IoT-based architectures, prototypes, improved techniques, and how to use the IoT for monitoring applications and associated environment and crop data management [20][22][23]. For example, Villa-Henriksen et al. [24] reviewed past studies for IoT applications in arable farming. They focused on IoT architecture represented by device, network, and application layer. Similarly, Navarro et al. [25] conducted a systematic review of IoT solutions for smart farming and focused on the concept, number of publications, and IoT applications in agriculture. Talavera et al. [26] focused on distributions of IoT-related research work globally, as well as applications of the IoT in communications, energy management, monitoring, and logistics.
This review article analyzed the trends in advanced technology-based agricultural studies, focusing on IoT and UAV applications. Further, it explored many essential issues that should be harnessed to take advantage of the IoT and other latest technologies to transform them into the agricultural industry. Also, this article outlines vital information that can support agricultural engineers and researchers, to implement advanced technologies, such as the IoT, UAVs, and others to attain advanced agricultural needs.

All the traditional approaches have been changed and overlapped by advanced technologies, such as the IoT and UAVs. Currently, the implementation of various wireless sensors and IoT sensors leads to the gateway of many innovations for crop improvement. Several traditional crop issues, including disease management, effective irrigation, cultural practices, and drought responses, are currently addressed by these new emerging technologies. Figure 2 depicts the primary applications, wireless sensors, and services hierarchy for advanced agricultural applications. The advanced technologies used to monitor major applications to improve crop productions are discussed below. 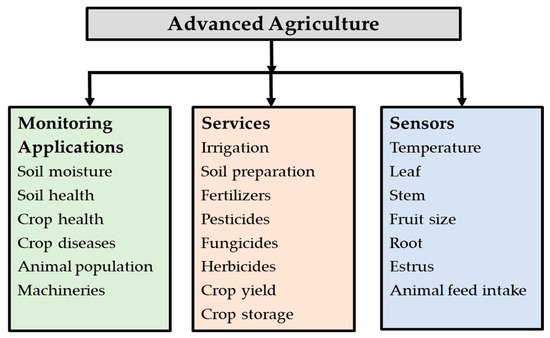 Human beings exist for a relatively short time in history, so the adaption of novel technologies and techniques of enhancing food quantity and quality is not advanced yet. For increasing crop development and yield, farmers have applied many measures, such as pesticides and fertilizers. Although there are other management strategies such as greenhouses, hydroponics, vertical farming, etc., for increasing crop production, these measures are not enough to fill this gap. Growers should apply new devices such as the IoT for agriculture advancement.

In traditional agriculture, most farming measures are applied by heavy machinery, including harvesters, massive robots, and tractors. Several communications and remote sensing techniques are used to operate these machines. In advanced farming, for many crop-related practices such as irrigation, sowing, fertilizer application, and harvesting of crops, these machines and equipment are supported by geographic information system (GIS) and global positioning system (GPS) technologies, which are very accurate, efficient, and precise. Moreover, other agricultural measures (the site-specific management of crops) cannot replace these advanced techniques. The development of contemporary agriculture needs the efficiency of gathered information and generally has two parts [9]. First, remote sensing programs with multifunctional devices, including UAVs, aircraft, and satellites, are needed. Second, many other devices, such as ground and remote sensors, are required for particular functions at different locations. A GPS device can be used to identify the data collection spot’s location, which can be used for location-specific processing.
Over the past few decades, agriculture has shifted from small and medium-sized agriculture to highly industrialized and commercial agriculture. This shift plays an important role in advancing the agricultural industry like other developed industries because, in agriculture, data, control, and measurement are significant factors in accomplishing equality among production and cost to enhance outputs. For this purpose, the IoT is a fundamental approach for advancement and benefits in agriculture, which are well planned, managed, and automated. According to this information, between 2017 and 2022, the world’s advanced agricultural industry is expected to grow by 19.3% in one year and reach USD 23.14 billion in 2022 [27].

5. Uses of UAVs in Agricultural Advancement

Currently, the IoT plays an important role in several fields, such as the agriculture industry (e.g., fish and poultry). There is a limited communication network in the agricultural sector, including Wi-Fi and base stations, which decreases the coverage of internet technology. Advanced communication technologies are the worst in developing countries, which are the major hurdles and challenges for the implementation of the IoT in agriculture. Without a reliable communication infrastructure, the information collected using sensor devices is not transferred quickly for analysis in developing countries [28]. Under these circumstances, UAVs can provide an alternate option to gather information for data analysis and processing. Moreover, UAVs equipped with advanced thermal, multispectral, hyperspectral cameras, and wireless sensors can collect data from several hectares of agricultural lands in a short duration. Currently, the agriculture sector can obtain tremendous benefits by deploying UAVs to address several major and long-term issues. We highlight some important areas where UAVs have played a crucial role in assisting growers throughout the crop cycle globally [29].