In livestock farming, effective alternatives to antibiotics that are able to promote health and prevent pathologies are urgently required to tackle antibiotic resistance[1][2][3], and replacing and reducing antibiotic treatments is one of the main targets of European policies [4]. This became even more important after the removal from the market of zinc oxide (ZnO) as a veterinary therapeutic treatment [5][6]. This decision was taken due to the observed increase in heavy metal environmental pollution and scientific evidence showing that ZnO co-selects antibiotic-resistant bacteria [7][8]. ZnO has been used widely after the ban on antibiotics as a growth promoter over the last decade [6][9][10][11]. Alternatives to ZnO and antibiotics are thus required particularly during the weaning phase due to the high incidence of enteric disorders and multifactorial diseases such as post-weaning diarrhoea (PWD) [12][13]. The gastroenteric tract (GIT) is a complex environment where the mucosal chemical barrier, immune system, microbiota and epithelium all impact intestinal health [14][15]. Preserving intestinal health decreases the incidence of pathologies, optimises digestive processes and promotes animal performance. There is increased awareness regarding the role of diet, not only as a physiological requirement, but also in the enhancement of animal and human health and in the prevention of specific pathologies [16]. The modulation of intestinal microbiota by dietary approaches, such as the use of feed additives, is one of the most promising strategies to reduce the risk of pathologies in food-producing animals [17][18].
Probiotics are functional feed additives defined as “live microorganisms which, when administered in adequate amounts, confer a health benefit on the host” [19]. Their potential mechanisms of action affect the intestinal microbial ecology through the manipulation of microbiota that lower the luminal pH, the competitive inhibition of pathogen strains, the production of bacteriocins with antimicrobial proprieties and the stimulation of the host immune system [20]. Probiotic supplementation in animal diets helps prevent or treat a variety of intestinal disorders, although their mechanisms of actions are not completely known [21]. Lactic acid bacteria include over two-hundred species and subspecies of which Lactobacillus sp., Lactococcus sp., Spreptococcus sp. and Enterococcus sp. are used as probiotics for monogastric animals [22].
Lactobacillus plantarum is included in the European register of feed additives [8] as a preservative (1; a), silage additive (1; k), microorganism (1; k) and gut flora stabilizer for chickens (4; b). In several in vitro and in vivo studies, some strains of L. plantarum demonstrated a protective activity against epithelial intestinal barrier impairment, restoring the function of thigh junctions and reducing paracellular permeability [23][24]. In addition, L. plantarum CGMCC 1258 supplemented at 5 × 1010 CFU/kg showed its positive effect in weaned piglets challenged with Escherichia coli K88, inhibiting diarrhoea and improving zootechnical performance [25]. In parallel, Lactobacillus reuteri was included in the EU feed additive register as a microorganism (1; k) until its withdrawal in 2012 [8] due to a lack of the required documentation. This microorganism is not seen as being dangerous and no issues related to its safety were mentioned in the EU commission decision [26], since it is included in the Qualified Presumption of Safety (QPS) list of the European Union [27].
Lactobacillus reuteri I5007 has shown a potential to improve thigh junction expression in newborn piglets and has been found to have protective effects after lipo-polysaccharide (LPS)-induced stress in vitro [21]. L. reuteri strains TMW1.656 and LTH5794 produce reuteran which can decrease the adhesive capacity of ETEC E. coli [28][29]. However, several studies have shown the positive impact of various L. plantarum and L. reuteri strains on improving piglet performance, diarrhoea prevention, stress alleviation, immunity and microbiota modulation [29].
Since few papers have assessed the effects of L. plantarum and L. reuteri strains and their synergy through a wide range of bacterial combination and supplementation levels, more studies are required to clarify the functional proprieties and the optimal inclusion level of these two bacterial strains on diarrhoea prevention in weaned piglets. In addition, probiotics may interact with the host metabolism [30] through their hypocholesterolemic and liver protection effects [31][32]. Furthermore, the bacterial combination does not always result in a synergistic effect, also showing possible competition among probiotic strains [33].

Bacterial strains exposed to a different pH range showed a statistically significant drop in viability at pH 2, with L. plantarum and L. reuteri registering a bacterial count of 8.09 ± 0.11 and 9.00 ± 0.02 log10 CFU/mL, respectively (p < 0.0001), compared to their relative controls at pH 7 (9.60 ± 0.08 and 10.79 ± 0.02 log10 CFU/mL, respectively) (Figure 1). Regarding the simulated gastrointestinal digestion, both bacterial strains exhibited an optimal capacity to survive with each tested condition, including gastric juice, bile shock and intestinal juice, without registering any significant decrease in viability compared to their relative initial microbial charge (Figure 2). 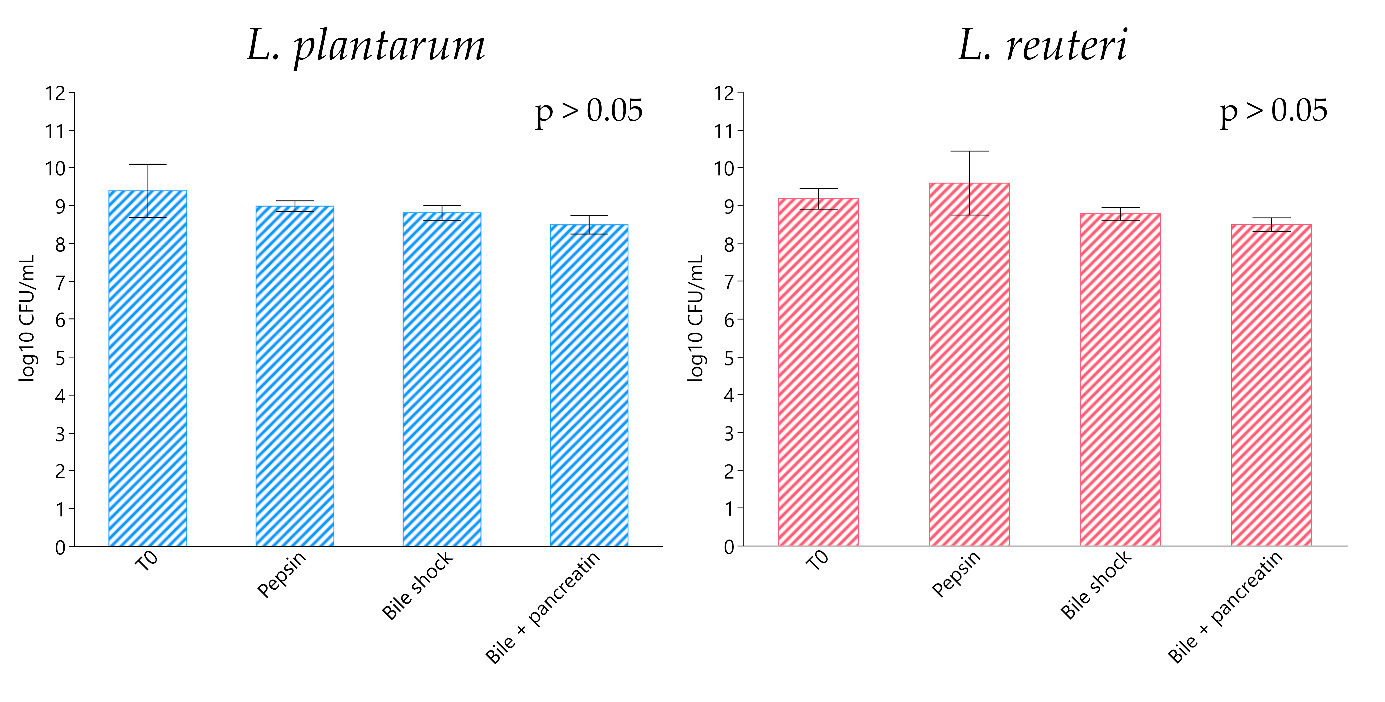 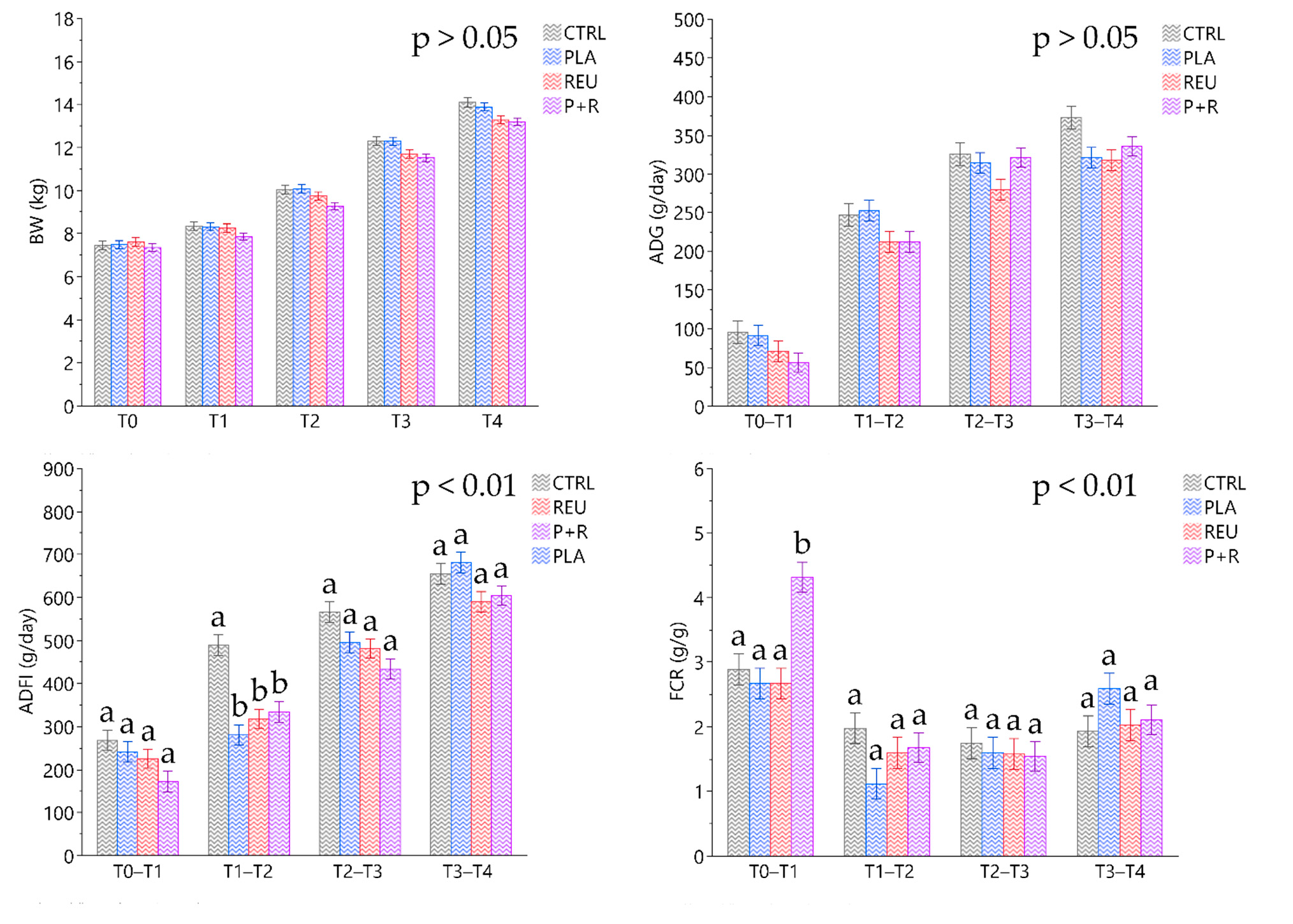 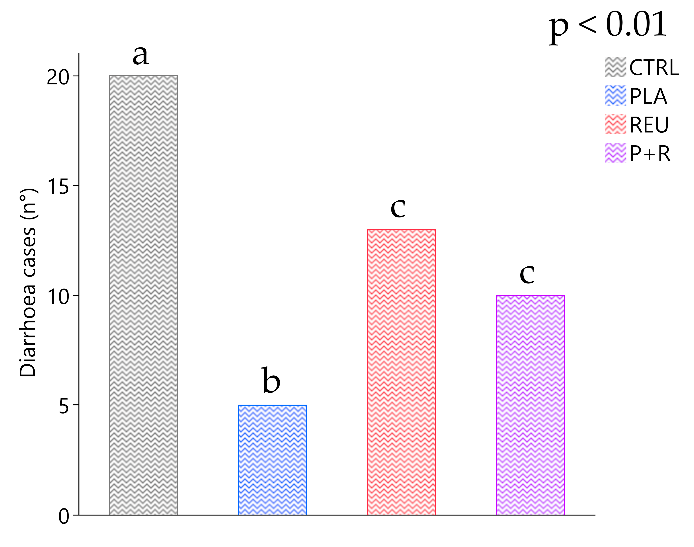 Table 1. Serum metabolites concentration at 28 days (T4) of in vivo trial, for the control (CTRL) and treatments groups (PLA, REU and P+R).

Dietary supplementation of 2 × 108 CFU/g of L. plantarum and L. reuteri significantly reduced diarrhoea occurrence registering and had the lowest faecal score in our trial. L. plantarum had the lowest diarrhoea frequency compared to the other bacterial strains and their combinations. Lactobacilli supplementation did not influence animal performance, total faecal bacteria, faecal lactobacilli and coliform. Dietary lactobacilli inclusion did not reveal metabolic status alteration ascribable to a pathological status. In particular, L. plantarum significantly raised the globulin levels, suggesting a possible stimulation of the immune system. In conclusion, we believe that L. plantarum and L. reuteri are promising functional feed additives for preventing pig diarrhoea. More studies are required to enrich knowledge of these bacterial strains, to assess their effect for longer experimental periods, and to optimise their possible delivery systems.

We thank Biotecnologie B.T. Srl that provided lactobacilli strains for this study.