Passive operation of air-breathing micro-fuel cells requires leaving auxiliary elements aside in order to maximize power and energy density, reducing the weight, volume and extra power consumption [6]. Dead-ended anode (DEA) operation is a common operational mode for portable fuel cells as it can simplify subsidiary systems, potentially avoiding flow meters and humidifiers. Its typical configuration usually employs a single pressure regulator before the hydrogen inlet to the cell and a purge valve after the anode outlet. However, DEA operation usually leads to a gradual voltage loss, mainly due to water accumulation at the anode.

Accumulation of water at the anode is a common source of failure and malfunction in proton exchange membrane fuel cells, particularly when they are operated under anode dead-ended conditions [1][2]. Even when dry reactants are fed as fuel, water accumulation may lead to anode flooding by back-diffusion, especially at low current densities (below 0.1–0.2 A·cm−2) [3][4][5]. At higher current values, the electro-osmotic force and the higher cell temperature usually reduce water accumulation at the anode chamber.

Several approaches have been developed to avoid anode flooding and mitigate its irreversible and deleterious effects [1][7][8]. Sequential purging is often applied to remove the accumulated water (and nitrogen) during DEA operation. This solution relies on pressure regulation to supply the necessary hydrogen to maintain the electrochemical reaction, but it needs to be optimized to limit the fuel release during the periodical flush [9][10]. Opening the purge valve releases not only water, but a non-negligible amount of fuel, which reduces its utilization percentage. This is an especially relevant issue for portable systems, in which fuel saving is crucial to minimizing their dimensions.

In 2013, CIEMAT patented a new hardware configuration for air-breathing micro PEM fuel cells to be operated in a completely passive mode, even without anode purging [11]. The invention relates to a small fuel cell operating with dry H2, which is fed at constant backpressure under dead-ended anode mode, and natural air convection capable of ca. 100% fuel utilization. Such an anode is able to work with 100% faradaic efficiency (stoichiometry λ = 1.0), which is a key issue to increase the autonomy of the application. The particular anode gas-tight configuration allows for continuous water permeability, which notably reduces the adverse consequences of fuel starvation by flooding. 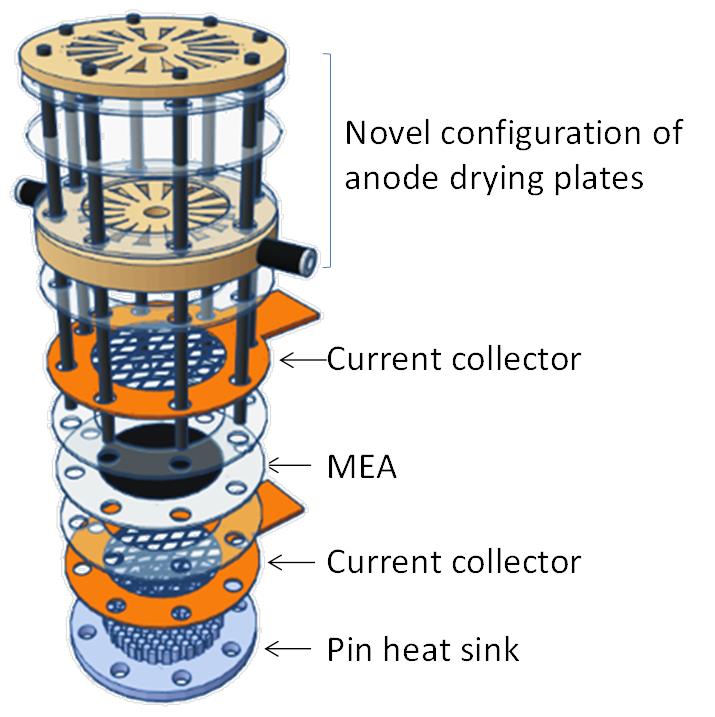