×
Login
Register
Create
× Warning! The entry has been locked by Grigorios Kyriakopoulos. Click here to unlock it.

Food Waste Management in the Context of Circular Economy

A circular economy (CE) is conceptualized under diﬀerent rounds of materials and energy cycling flows and is a matter of a three-leveldeployment: inter-enterprise circulation,regional circulation, and social circulation. Regarding them, the aim of this research was to get an update on the current technological advances and the perspectives of its implementation in food waste.

In developed countries, generated food waste (FW) is twofold of the food produced in the developing ones. Therefore, it is of a paramount importance to deal with those impacts in present and future waste management, considering FW to be a resource divertible from landfilling [[1]]. Thus, the profound opportunity of the CE concept, as depicted in Figure 5, is a viable way to produce renewable energy sources and materials [26], toward a holistic understanding of the role of design in such a way [[2]].

Contrary to the common sense that food waste management deployed through CE is ideally managed by multinational companies, family businesses have perceived those circumstances when social cohesion is disrupted and environmental problems are unveiled, being especially alarming, as the development of theories of functionality, ecology, and development are incorporated through the lens of sustainability. Subsequently, family businesses can analyze the relationship developed between companies and their stakeholders, defined as groups or individuals who can affect or be affected by the achievement of a corporation’s purpose. Then family businesses recognize their responsibility and respond by implementing new environmental policies or regulations, further adopting socio-emotional values to foster the transition to more sustainable production systems through the CE context. In this respect, the reasons why family firms’ transition to a CE based on the socio-emotional wealth (SEW) theory was verified in a food retail leader in the Spanish market [[3]].

SEW is composed of three main dimensions, acting as motivation that speeds up the implementation of CE in family businesses. The first dimension is family prominence, unveiling the importance of how the family as a business owner is perceived by the community. The second dimension is family continuity, unveiling the importance of making decisions based on the sustainability of the family business and desire to maintain family ownership and management. The third dimension is family enrichment, indicating the significance of the desire to maintain family harmony through altruistic behavior, a distinctive characteristic of family-owned companies. Most family business decisions tend to preserve and enhance the family’s SEW, since family businesses can behave differently from non-family businesses because non-economic factors dominate family firm business decisions for three reasons. Firstly, emotions are important in family-business relationships. Secondly, the family’s own values, such as collectivism and feelings of responsibility, condition its behavior, commitment, and perpetuation. Thirdly, altruism motivates family businesses, which are generally immersed in their community, to protect their image and reputation. Through long-term, trans-generational perspective, family firms foster a strong desire to guard and protect its corporate reputation, thus, the family pursues the preservation of SEW, aiming at shaping the business to fit its (family) needs.  The SEW framework highlights that one of the main objectives of family businesses is the search for continuity over time; the family will take the decisions required to achieve continuity. Business success and family balance are equally important to the sustainability of the company. The family will thus take the necessary steps to transition to a more environmentally sustainable model, such as CE, seeking the preservation of the family’s SEW. In this context, SEW can be useful to practitioners, explaining realities and proposing ideas for real-world practice, the final theory is novel and relevant to the study of family businesses [[3]]. 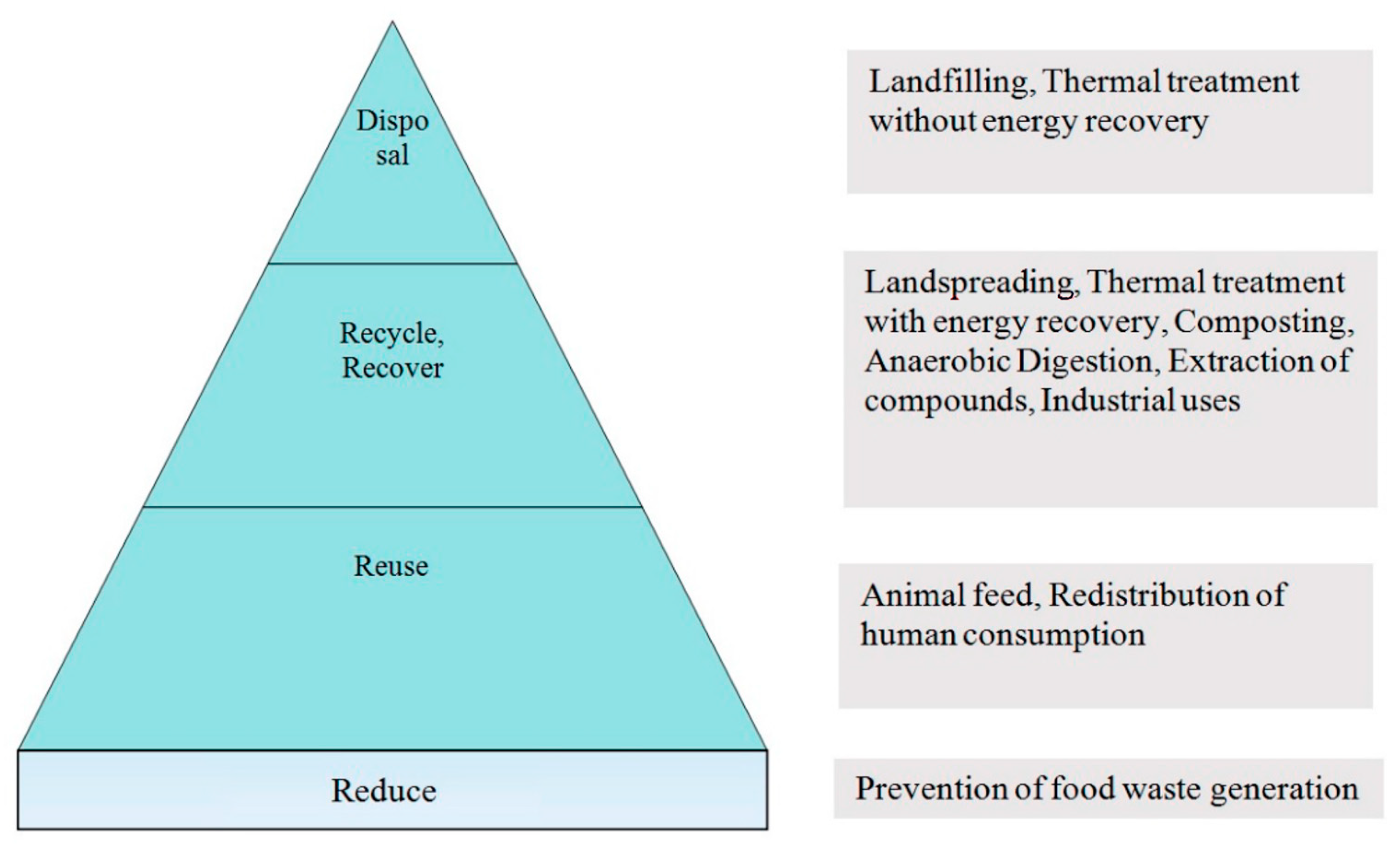 In the relevant literature, the traditional technology of composting and the radically innovative approach of insects for animal feed were investigated by a developed structured questionnaire, regarding the perception of consumers in accepting novel CE technologies, as well as their willingness to be engaged with closed loops targeted at minimizing food waste [[5]] resulted in non-significance socio-economic variables (F test statistic: 0.134). Figures 6 and 7 below depict the corresponding loops for each group in household recycling without and with “insects as feed”. 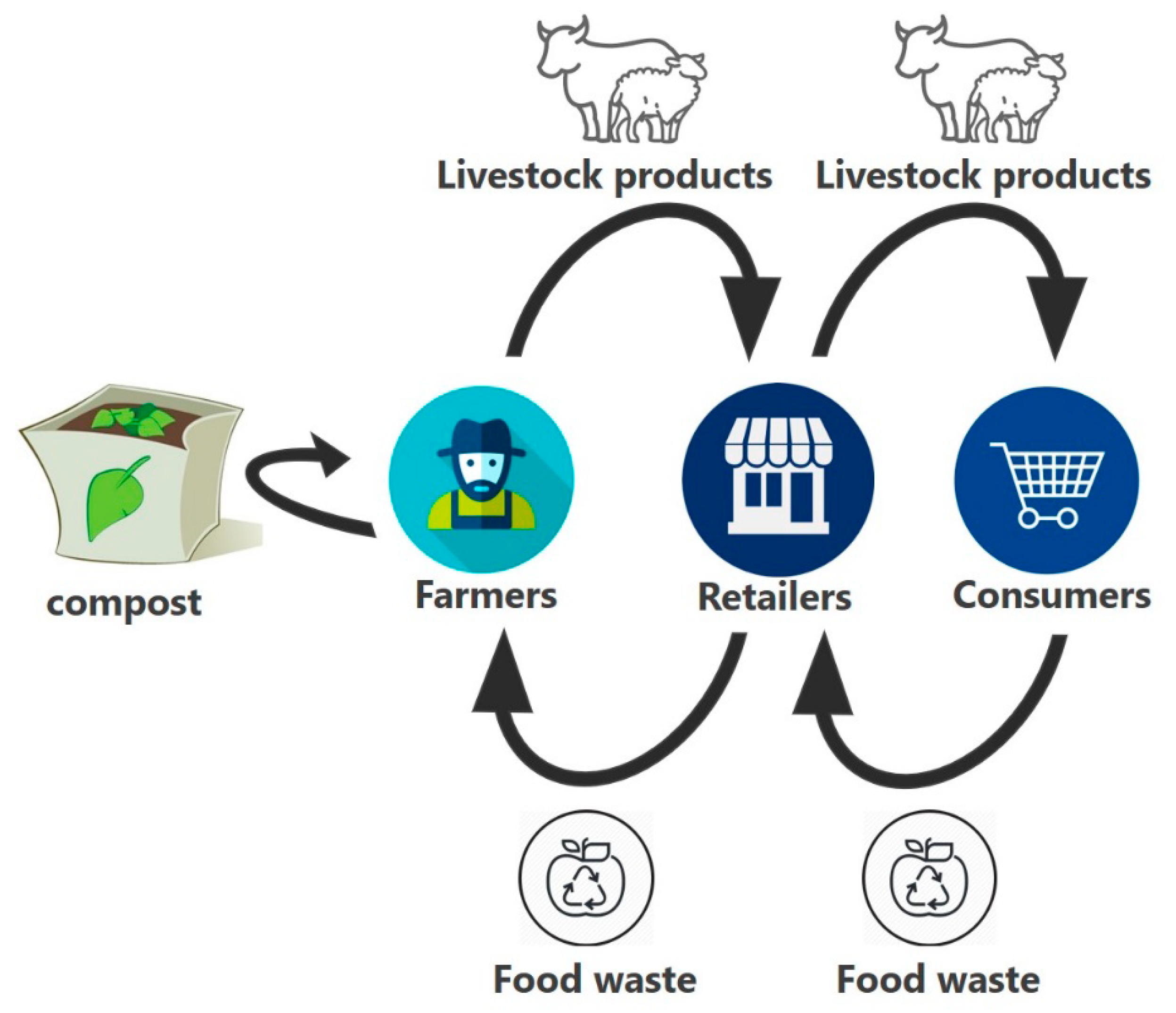 Figure 6. Circular paths concerning the use of the technology “compost” for recycling household food waste without insects as feed (solid line). Adapted from Source: Adapted and modified from Borrello et al. [[5]] p.7/18. 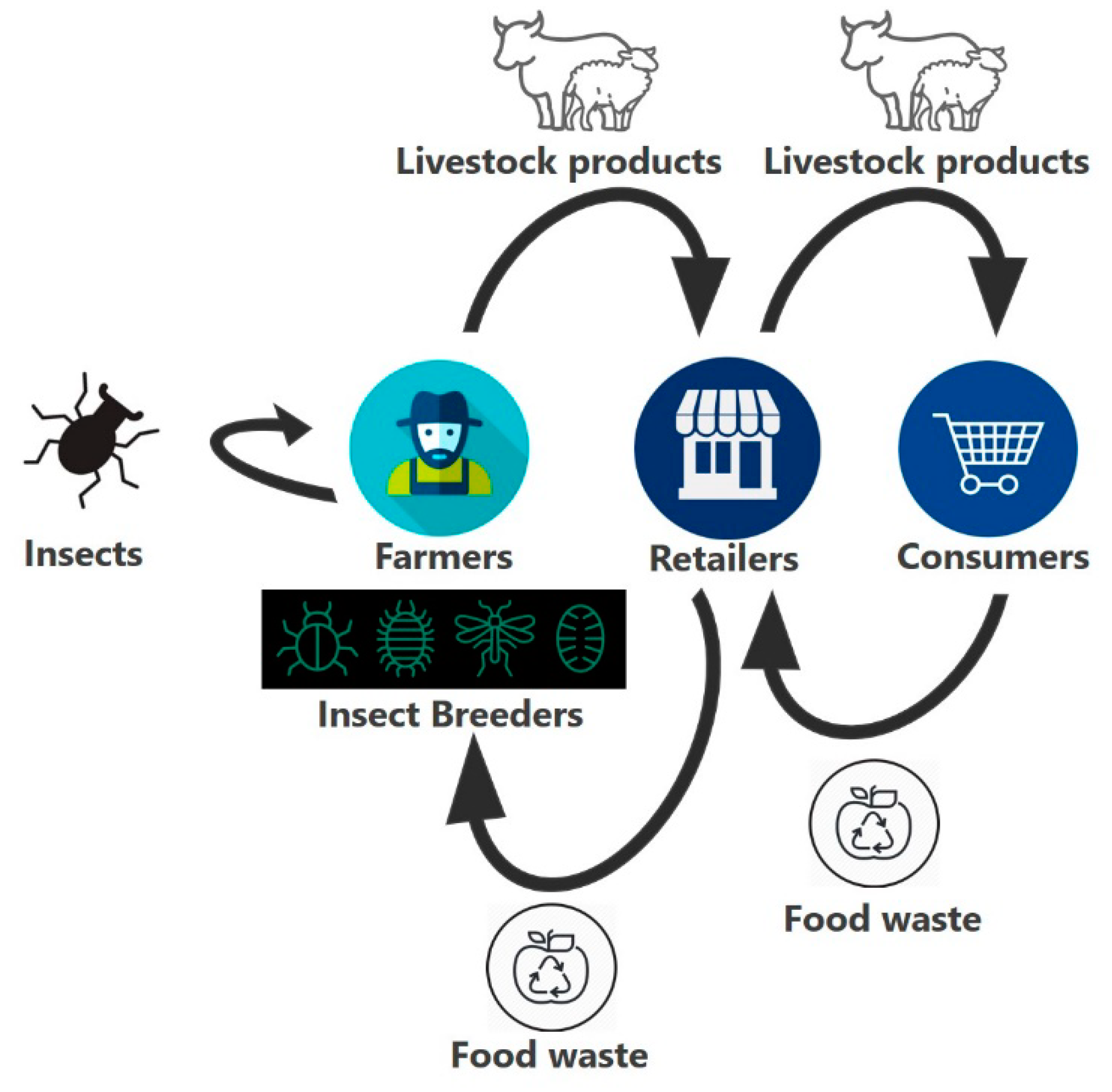 Overall, based on the study of Borrello et al [[5]], it was argued that (1) the treatment technology has no effect in the preference of the interviewees, (2) there is a problem of assuring the proper sorting by consumers of the organic food waste, and fining penalization on a discount reward for those consumers who deliver non-organic waste, (3) the correlation between income and food consumption of households is not sufficient to effect the reward proposed to reduce the quantity of animal products consumed, (4) there are limitations in model scalability, and (5) the corresponding population prefers to make personal effort towards the CE transition and less attached to monetary compensation.

EU policy supports waste reduction and recovery activities based on the waste hierarchy concept and the CE framework [[1]], setting the heat of combustion for energy production as a second option, and landfill disposal as the last option. Through the CE system of production and consumption, the highest value and quality is retained by the product value chain beside the energy efficiency [[6],[7]]. In the context of FW management and in alignment with the principles of CE, the results are influenced by the options of methodology and assumptions considered. On the other hand, AD seems to contribute and fit into the new vision of CE, whereas materials and waste fluxes can benefit nature’s cycles, by releasing valuable by-products to the fields, thus enhancing the cultivated ecosystems [[6]].