Urbanization, when it is not planned carefully, are highly effecting the urban heat island. To mitigate the problem, urbanization planning must take into consideration the implementation of greenery systems and sustainable ecosystems for buildings as part of the solution in addition to the outer space. The mitigation techniques that are influencing the urban heat index may be the greenery systems applied on buildings, or urban green spaces that include large land and large scale systems, such as lakes and parks. The objective of the current article is to compile, discusses and compare the previous studies on greenery systems, like green roofs and green walls, how they are supporting the energy saving and improve thermal conditions in the building sector, as well as improving the urban heat index. The fundamental  of greenery systems, which are thermal insulation, evapotranspiration, and shading effect, are also discussed. The benefits of greenery systems are including the improvement of stormwater management,  improvement of air quality, the reduction of sound pollution, the reduction of carbon dioxide, and the improvement of aesthetic building value.

The energy efficiency and thermal comfort of the building is depending on the building interior environment responding to air conditioning and artificial lighting needs. The building skin plays an important role on the total energy consumption of the building by controlling the transfer of thermal heat into the building [1][2]. Greenery systems are one of the approaches among other innovative technologies to improve the thermal performance of a building, as it displays significant energy reduction and facilitates urban adaption to a warming climate [3].

There are three different classifications of the greenery system, which are the green roof, green façade, and living wall, as shown in Figure 2. 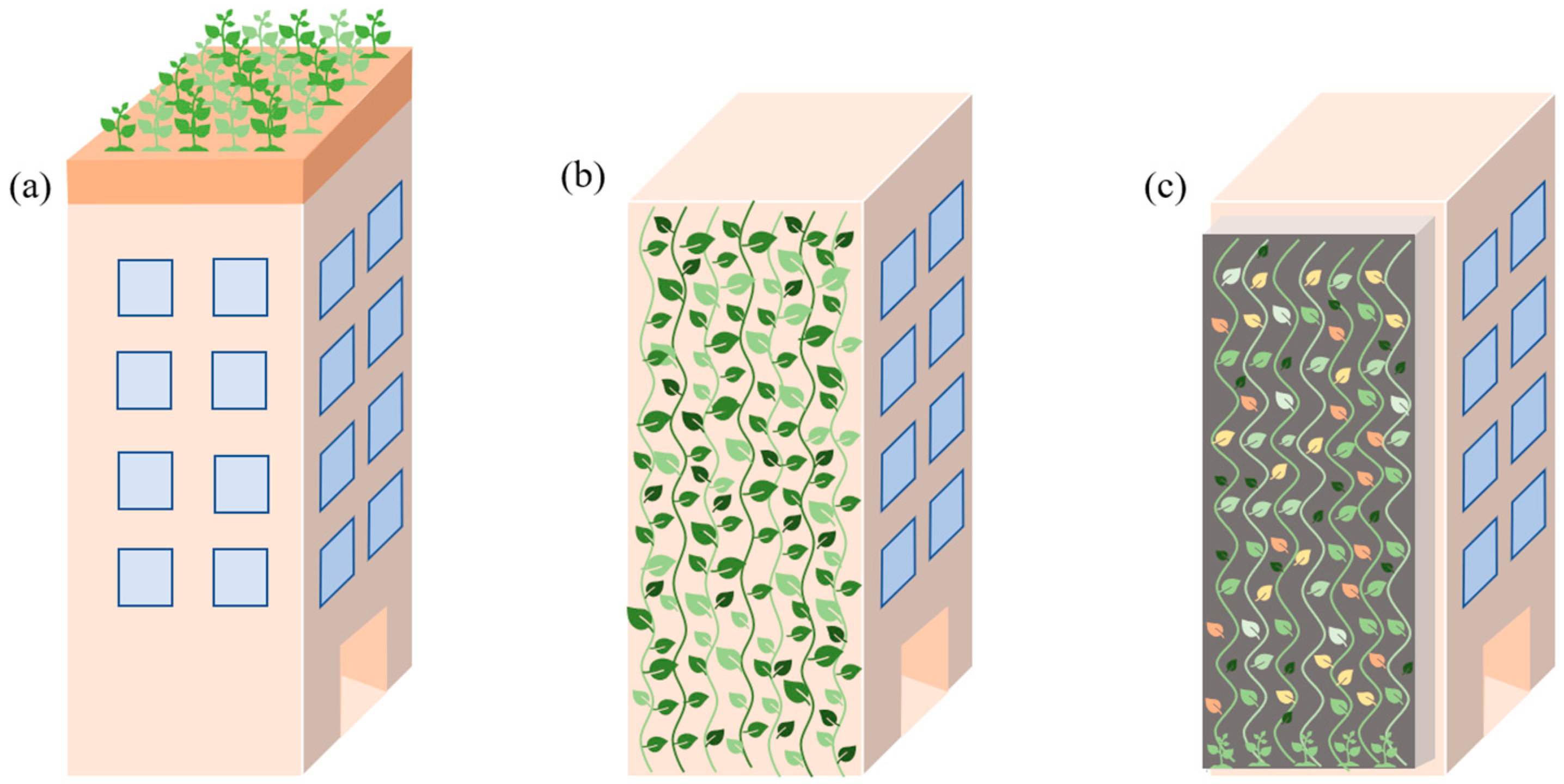 The roof of a building is approximately 20 percent of the total building structure surface [4]. Thus, providing a green layer on the roof will display a significant influence on the thermal performance of the building. A green roof is defined as the utilization of different supportive layers, which provides a suitable condition for the plants to form a green landscape on the roof [5][6][7][8]. Research suggests that the green roof can reflect 27 percent of solar radiation, absorb 60 percent of solar radiation through the process of photosynthesis, and transmit 13 percent to the growing medium [9].

The composition of a green roof is shown in Figure 3 below. The supportive layer includes: waterproof membrane—a layer of membrane which protects the root from decaying; filter membrane—a layer of membrane which prevents fine residue from infiltrating into the drainage layer; drainage layer—a layer to remove excess water to prevent water clogging in the system; growing medium—a layer of material composed of inorganic and organic matter, which provides a suitable growing medium to grow plants; and plants—a layer of green vegetation [10][11]. 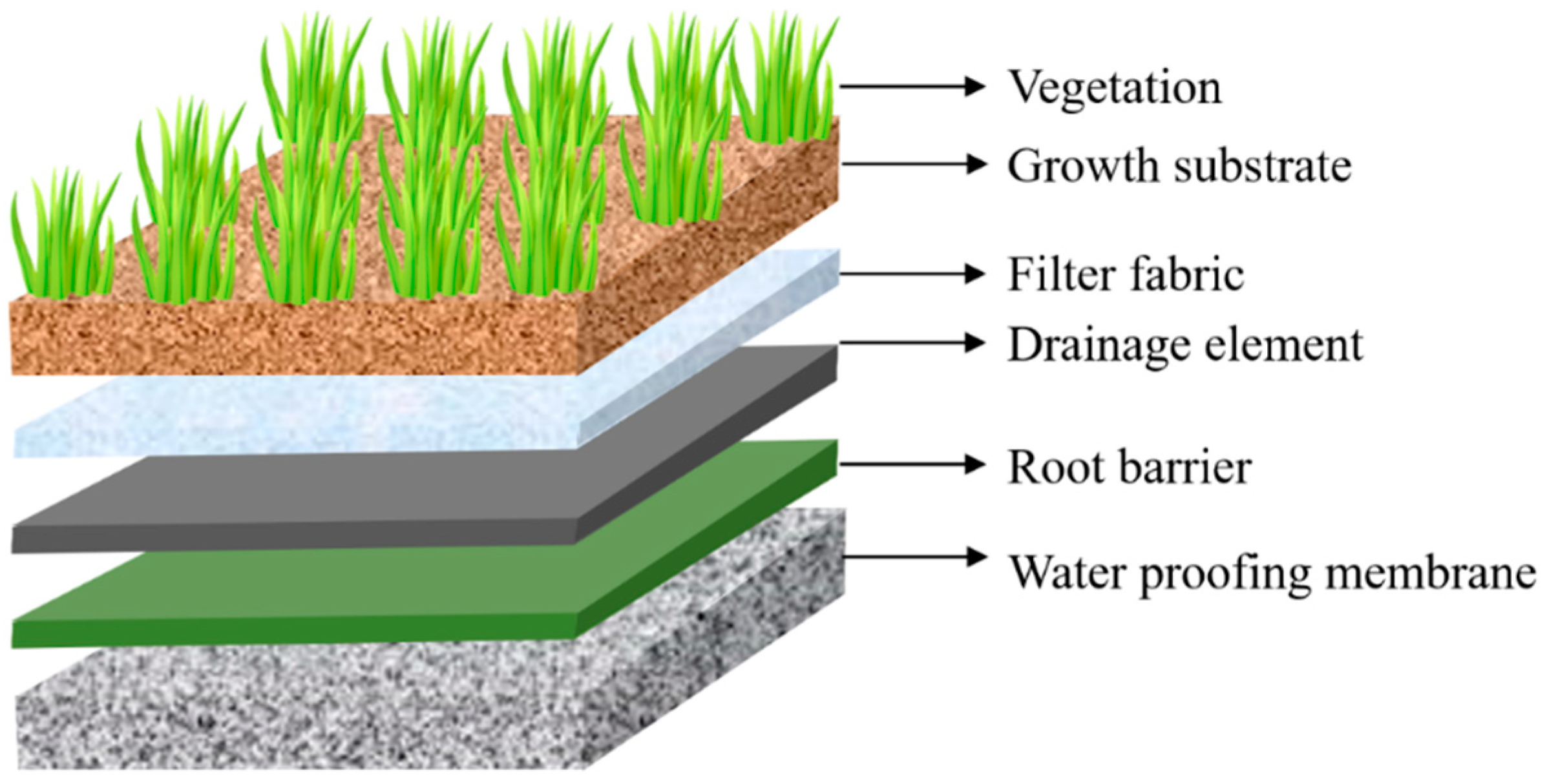 Figure 3. Composition of a green roof.

In accordance with the type of usage, construction factors, and maintenance requirements, the green roof is divided into two classifications: intensive and extensive. An intensive green roof has similar management to a ground level garden to provide amenity space and is accessible, as shown in Figure 4 below. It has a thick growing medium of more than 15 cm up to 200 cm, which requires higher construction cost and maintenance. Due to the increased soil depth, an intensive green roof has higher weight and has a wide variety of plants, such as shrubs and small trees [5][10][12][13]. The variety of plants creates an appealing natural environment with improved biodiversity [14]. 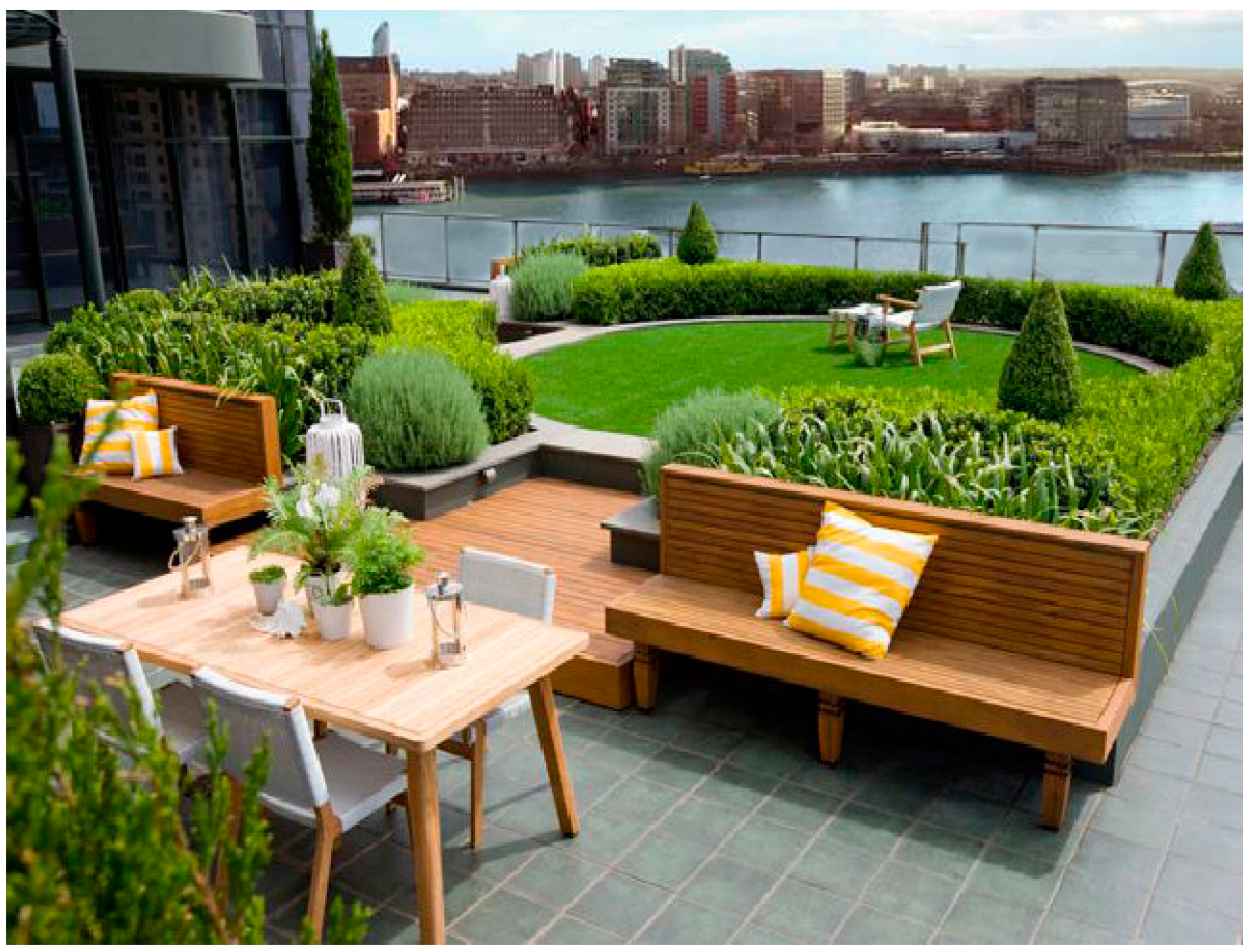 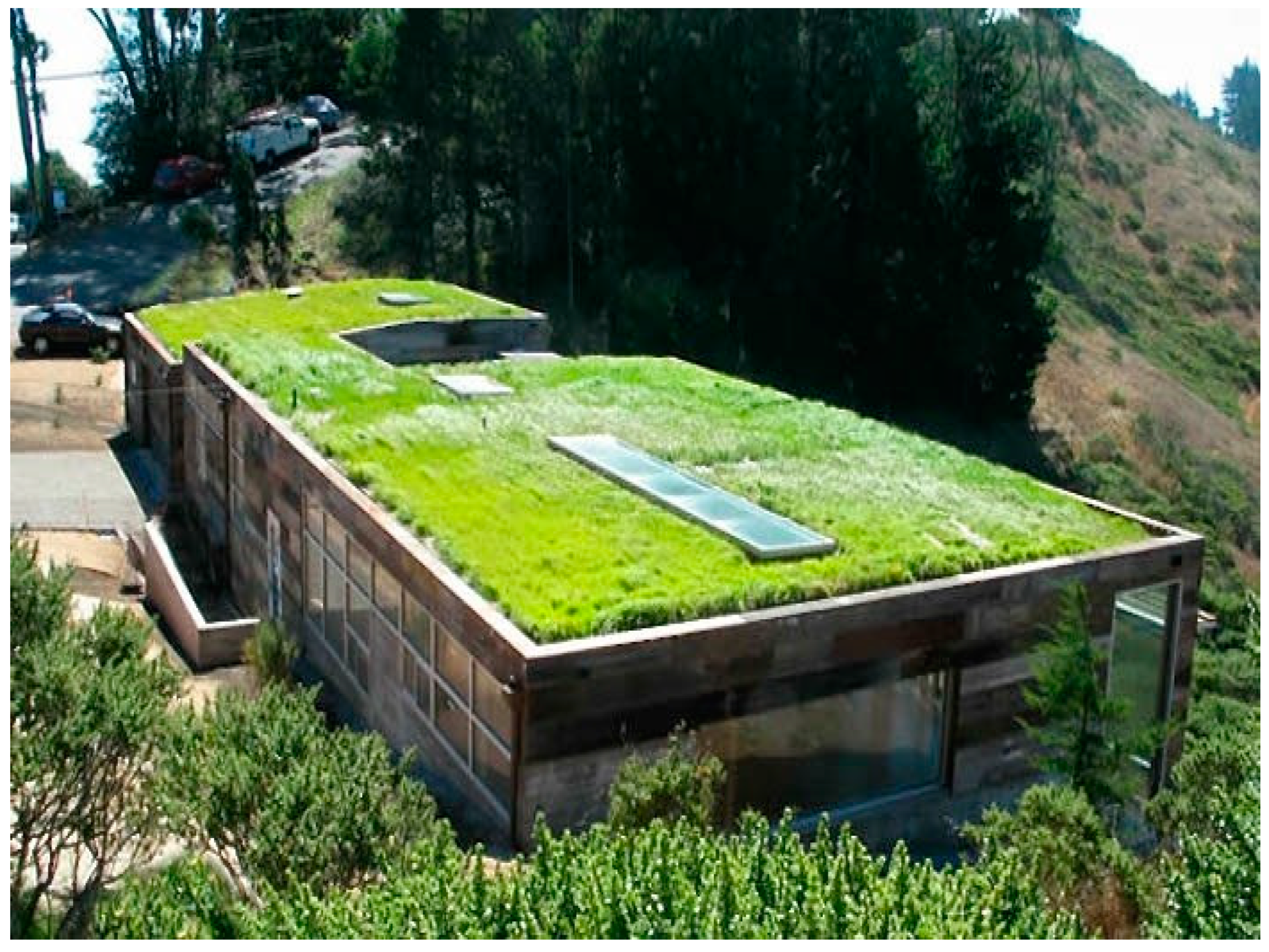 The walls of a building occupy a high fraction of the total building structure surface, with the total wall areas potentially greater than the space compared roof [18]. In case of a high-rise building, the surface area of a wall is 20 times greater than the roof [19]. A green wall has greater potential compared to a green roof considering that a green wall can double the ground footprint of buildings [20]. The definition of a green wall is climbing plants grown in a supported vertical system either directly against or on supported structures integrated into external building walls [21]. The green wall is divided into two general classifications: green façade and living wall, as shown in Figure 6. 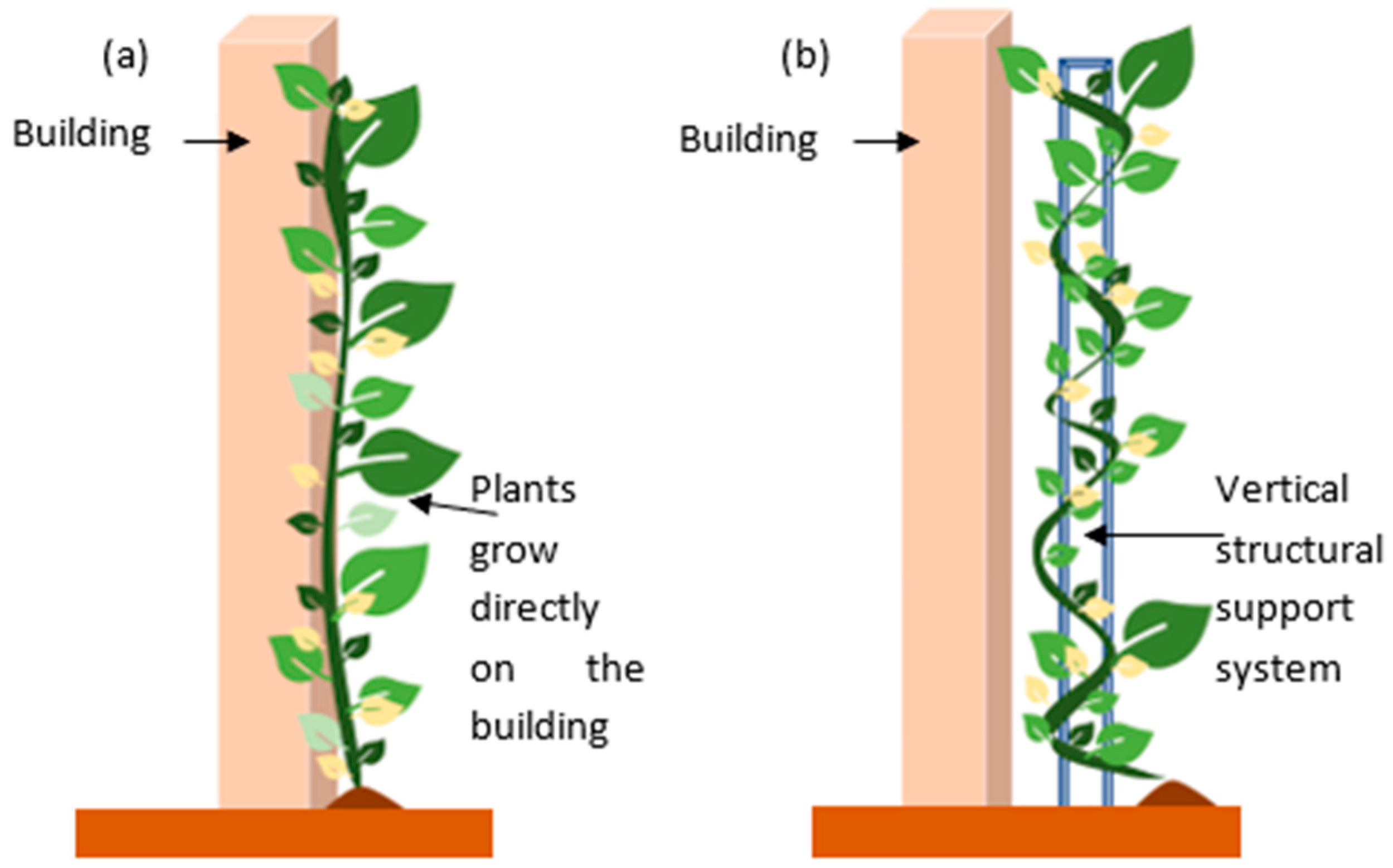 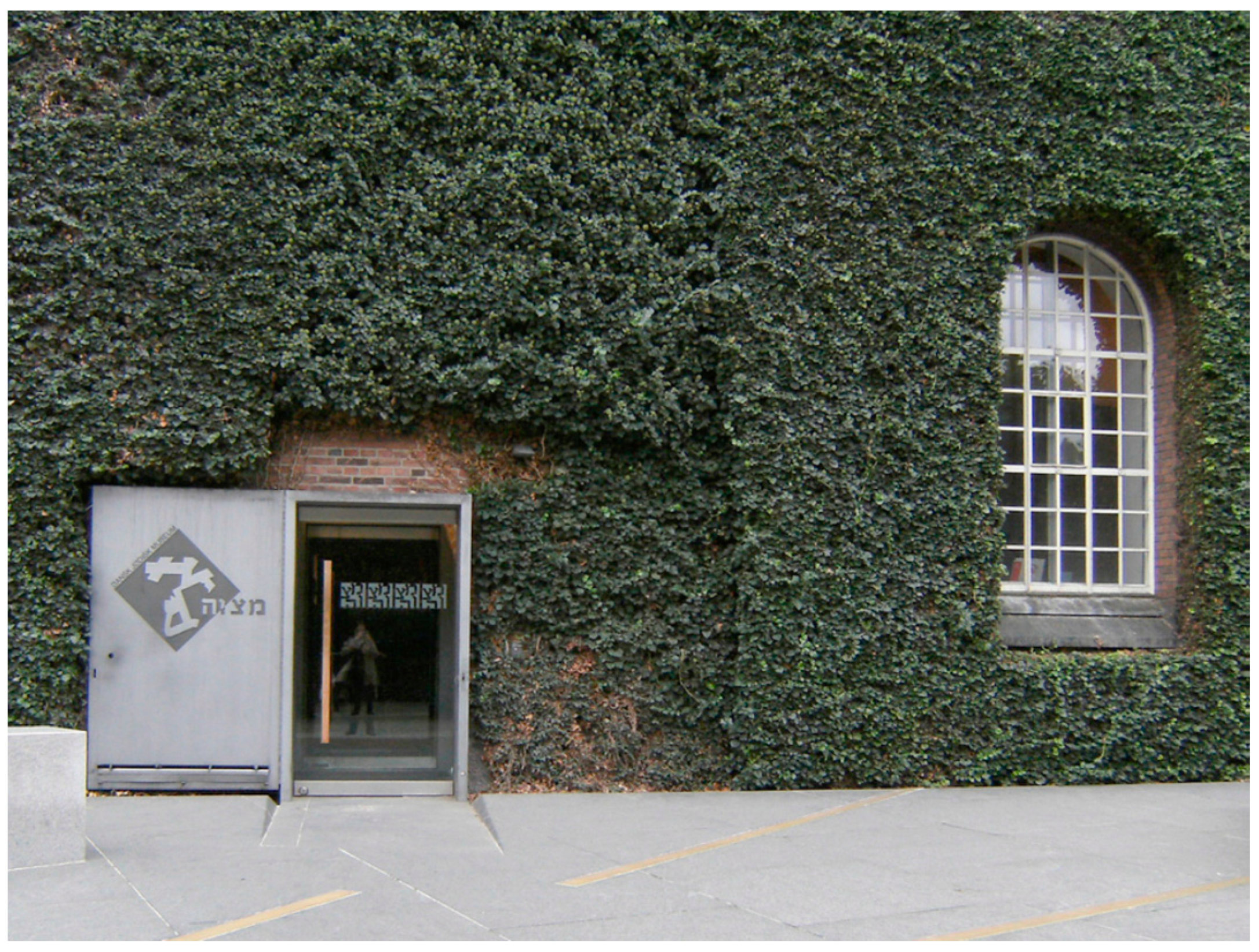 On the other hand, a double skin green façade requires a vertical structural support, such as modular trellis, stainless steel cables, or stainless steel mesh to guide the plant’s climb along the wall of the building like a second layer of skin, as shown in Figure 9 below [21][23][24]. In a double skin green façade, the framework is installed at a distance from the wall, creating a gap or cavity between the wall of the building and the plants. The distance of the cavity influences the rate of air exchange, which affects the wall surface temperature and indoor air temperature [25]. As the distance of the gap increases, the temperature inside the cavity decreases, resulting in higher wall surface temperature and indoor air temperature. According to the research conducted, the optimum distance of the gap is 30 cm [26]. 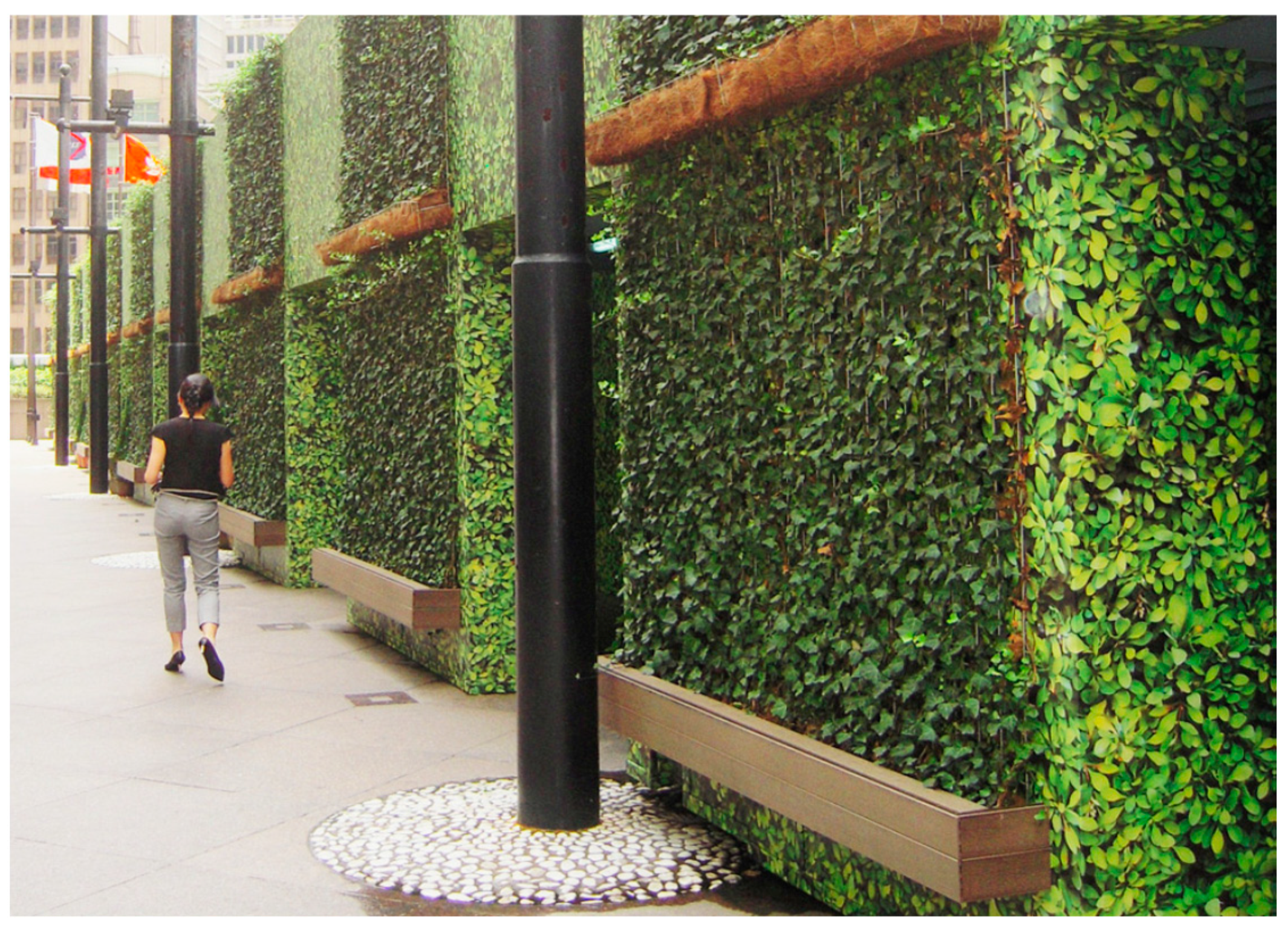 In comparison to the green façade, a living wall has a more complex structure, including special supporting elements, growing media, and an irrigation system to serve a large diversity of plants [27]. The living wall is involved in the recent innovation of wall cladding and is as displayed in Figure 10 below. The living wall is composed with pre-vegetated panels that are fixed to a structural wall of a free-standing frame to allow a rapid coverage of large surfaces and a more uniform growth along the wall of the building, thus reaching the top of high buildings [23][28][29]. The living wall allows the development of the aesthetic concept of the green wall based on the variation of plant color and density [23]. Hence, a living wall system has a high construction cost due to its complexity to provide a variety of plant options with fast and good coverage on a very tall building. 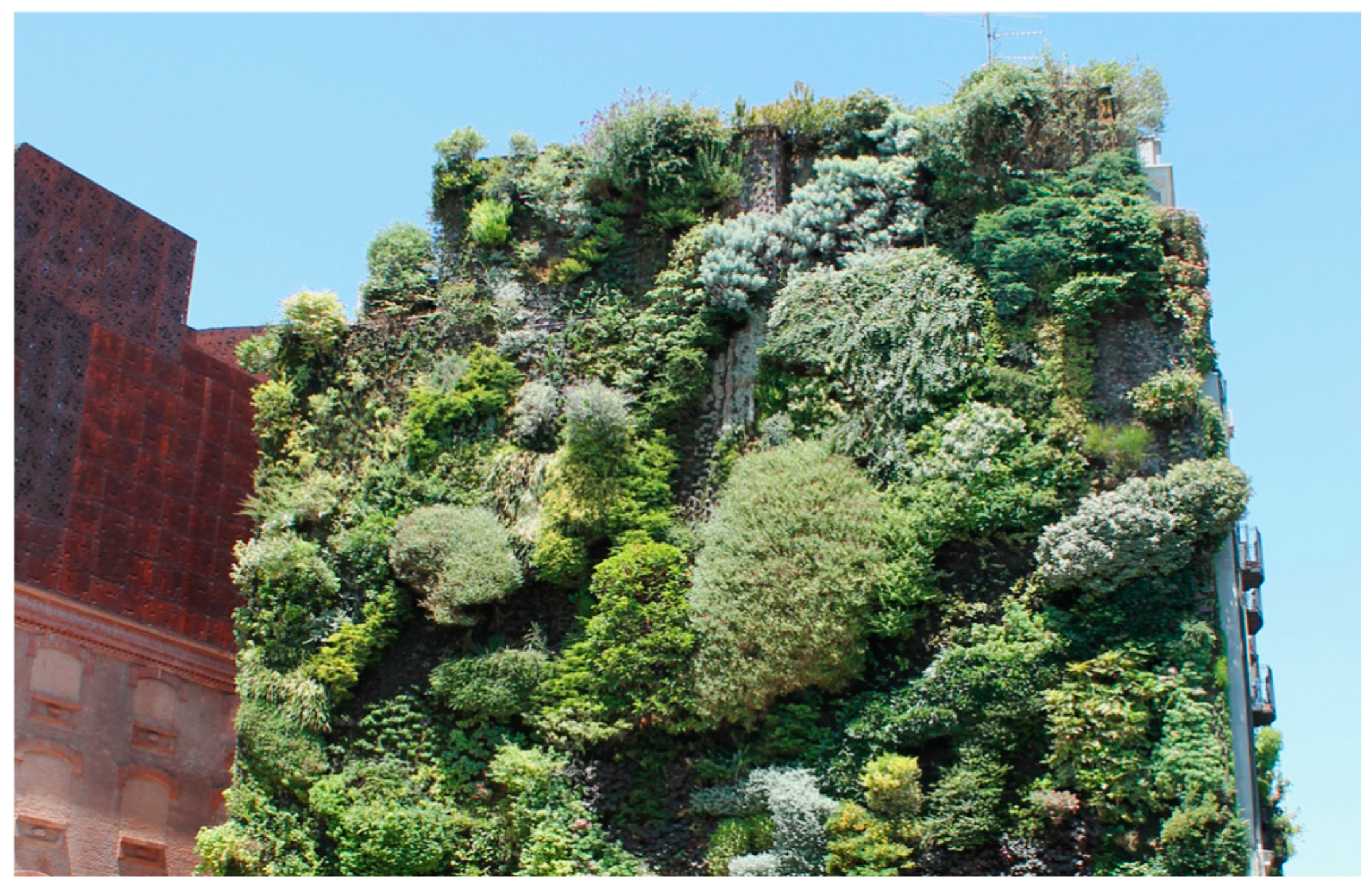 Greenery systems, such as green roofs, traditional green façades, and double-skin green façades, are comprehensively considered and analyzed in the current review. The effectiveness of greenery systems, with evidence from previous research, is also investigated. The results show that greenery systems can improve the thermal performance of buildings with fundamental mechanisms of thermo-fluids and energy conversion, such as thermal insulation, evapotranspiration, and shading effect. A few parameters considerably influence the fundamental mechanisms, such as the leaf area index, foliage height, growing medium, and type of plants. In addition, greenery systems have a few environmental benefits, such as the improvement of stormwater management, air quality, reduction of sound pollution, sequestration of carbon dioxide, and the improvement of building aesthetic.

Literature on the installation of respective greenery system configurations has produced significant results in terms of the reduction of the urban heat index, the reduction of wall surface temperature, and energy conservation. The findings confirm that greenery systems are solutions to urban environment sustainability. Notably, performing a proper comparison of previous studies is difficult because the system configuration, type of plant, climate influence, and other parameters differ. However, the collected and classified data in this work are important in making appropriate decisions on proper greenery systems for building sustainability and building thermal control. Despite drawbacks, the positive results of previous studies suggest the potential of using greenery systems as passive systems for mitigating urban heat islands and reducing the energy load in buildings. Despite the considerable variability of the results obtained, the results still demonstrate a positive impact. As such, it is highly recommended to conduct more case studies and experimental investigations to enrich the literature on greenery systems. In particular, experimental studies are advised to be directed to evaluate the influence of greenery systems on thermal comfort and the energy saving in the building.