Researchers are continuously rallying to enhance the detection of causal source for water pollution through either conventional or mostly advanced approaches focusing on spectrometry, high-throughput sequencing, and flow cytometry technology among others. From this review’s perspective, each pollution evaluation technology has its own advantages and it would be beneficial for several aspects of pollutants assessments to be combined and established as a complementary package for a better aquatic environmental management in the long run.

Wastewater is the used water from anthropogenic activities usually released from several sources which are domestic, storm, and urban runoff, agricultural runoff, and industrial discharge, where they could present as a combination within sewer inflow or infiltration (Figure 1)[1]. The release of those wastewaters would contribute to the unusual contents of dissolved or suspended waste materials in natural water. These polluting dissolved and suspended compounds which are commonly addressed as dissolved organic matters (DOM) and dissolved particulate matters (DPM) are used as one of the main monitoring elements for wastewater quality. They also act as the primary basis for the biodegradation process involving adaptable or resistant microorganisms which are capable of expressing genetic functionality during pollutants catabolism. The dissolved organic and particulate matters, microorganisms, and genetic materials are the three key elements which are significant for the advanced monitoring of wastewater and water quality in general.

Apart from the expectable deterioration of overall water quality, detrimental effects on human health and ecosystems can indirectly arise due to the release of an estimated 80% of untreated industrial and municipal wastewaters into the environment [7]. This matter demands continuously evolving monitoring technology to be developed and thus established, especially when it involves the wide variety of emerging pollutants in the water ecosystem[8]. This is agreed upon by Carstea et al.[9] who emphasized on the importance of wastewater quality monitoring for the early warning of waterbodies pollution and remediation progress, besides ensuring regulatory compliances throughout wastewater treatments and discharges. Unfortunately, it is difficult to track down the source of pollutants in the receiving waterways since they are generally exposed to various anthropogenic wastewaters. While there are gaps in the standardized water quality assessment systems, it remains challenging to fully enforce the environmental policies to the responsible parties. This shows the importance of a comprehensive monitoring tool for the better assessment of the impact and detection of wastewater sources, to finally enable fitting solutions and preventive measures for targeted pollutants releases into the river[10].

Wastewater effluents comprising of the DOM releasable into the natural aquatic ecosystem either through discharges or reuse practices might cause changes of the natural compositions of the receiving water bodies[11]. The compounds from various wastewaters can be categorized into: (i) recalcitrant natural organic matter which is naturally present in drinking water sources, (ii) soluble microbial product, which is referring to products produced in wastewater partaking biological treatment system, (iii) synthetic organic compounds which are present in trace amounts resulting from domestic or industrial usage, and (iv) disinfectant by-products which are sequestered from disinfectants introduced during drinking or wastewater treatment[12]. The uniqueness of DOMs that originate from wastewater lies upon their greater organic nitrogen and aliphatic contents[13][14]. Some other researchers also reported on other DOM members including aromatic polymers containing oxygen, nitrogen, and sulfur functional groups, especially in engineered treatment systems[15]. The foreign or allochthonous compounds introduced by many sources including industrial wastewaters and urban or precipitate runoffs would undergo either biotic or abiotic transformation processes which lead to the abnormal ecological function resulting from the fluctuation of DOM composition in the natural aquatic environment[16]. The fatality of the hardly removed pharmaceuticals and endocrine-disrupting compounds coming from many industrial, agricultural, hospital activities, and wastewater treatment plants (WWTPs) are the most widely discussed emerging pollutants nowadays[17][18]. It is a concern that, even after the urban wastewater is treated, dissolved organic compounds and particulate matters, such as endocrine disrupting chemicals and cellulose fibers, are still bounded in the effluents[12][17]. Such concerns demand better pollutant monitoring in the aquatic environment. Conceptually, there are three main elements which are eligible for aquatic monitoring purposes, as shown in Figure 2. 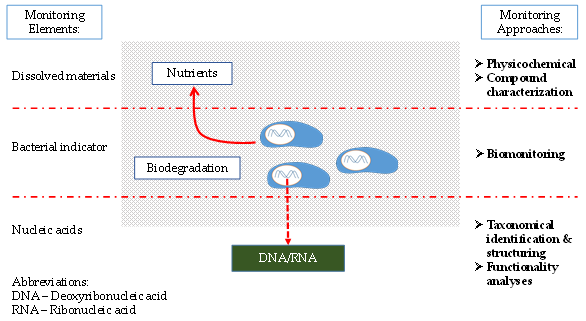 Figure 2. River and wastewater monitoring in the ecosystem including the physicochemical factors, compound characteristics, biological elements and molecular (nucleic acids) analyses are being considered in various monitoring tools.

The presence of the organic and inorganic pollutants themselves can indicate a pollution through physicochemical characterization which are the basis of current monitoring practices. Additionally, compound profiling has been implemented for the monitoring of wastewater and the aquatic environment. Meanwhile, bacteria flourishing from biodegrading or metabolizing the DOM may become a potential bioindicator for the excessive release of wastewater effluent discharges, where this approach can be categorized under taxonomical or structural assortment. Other than individual enumeration or identification of indicator bacteria, bacterial community patterns have been opted to better evaluate the condition and sources of contaminants in water resources. Not only limited to the physical presence of the specific bioindicator organisms, nucleic acids carried and expressed by them during the biodegradation process are considered as valuable components utilizable for molecular based monitoring. Moreover, while the DNA and RNA contribute towards the better taxonomical enumeration of indicator species, they are also used to detect actively expressed genes stimulated by the pollutants, and this is classified as a functional approach in aquatic body monitoring.

Overall, regardless of any resources of water pollution, the basis of monitoring the water bodies quality circled around the measurement of physicochemical characterization of pollutant compounds in the water systems alongside other physical determination, such as pH, temperature, turbidity, and suspended solid. These approaches, although they help to address water quality in general, lacked the specificity to track the source of pollution. With the concept of “indicator tracking” either through conventional methods or modern approaches, not only is the physical presence of the bioindicator itself considered, but its biological mechanisms are also mapped into an advanced technological development to improve the monitoring processes. The environmental scientists are now advancing with a more comprehensive, rapid, and specific method to complement the currently established aquatic monitoring procedure, so that the exact cause and source can be addressed. Due to that, key elements involved in a polluted ecosystem mainly the pollutants composition, bacterial indication and biomolecular components carried by the bacteria are extensively utilized in water pollution assessments. Through this review, it was shown that, aside from the continuous improvement done for bioindicator determination, identification, and detection through molecular approaches, other potential monitoring tools, especially spectrophotometry and flow cytometry, are being extensively explored to strengthen the aquatic pollution control in general. In further future, it is expectable that these elemental analyses would be combined as a well-established complementary package to address the cause and source of water pollutions with better specificity, efficiency, and comprehensiveness.