Phytomedicine is a plant-based medicine, and it is one of the subsets of complementary and alternative medicinal (CAM) therapies [6][1].The World Health Organization (WHO) defined herbal medicine as the knowledge, skills and practices based on the views and experiences related to different cultures used in the preservation of health and the prevention, diagnosis, improvement, or treatment of illness [2,7][2][3].Traditional herbal medicines are plant-derived substances with minimal or no industrial processing that have been used to treat illness within local or regional healing conventionalisms [2].

Published research has proven that several secondary metabolites demonstrate hypoglycemic activity in vivo and in vitro, and usually, they affect multiple targets, proteins and enzymes.Alkaloids, phenols, anthocyanin, flavonoids, saponins, tannins, terpenes and coumarins were found to elicit a significant influence on diabetes [9,10][4][5].

Phlorizin is a natural dihydrochalcone found in a number of fruitful trees, mainly the Malus genus.It produces renal glycosuria and blocks intestinal and renal glucose reabsorption by inhibiting the sodium-glucose symporters located there [11,12][6][7].Recently, ertugliflozin arrived as the newest synthetic GLT-2 (glucose transporter-2) inhibitor to receive FDA approval for the treatment of diabetes [13,14][8][9].

Starch is mainly converted to glucose by the action of α-amylase that hydrolyzes macromolecules into oligoglucans, and α-glucosidase further degrades oligoglucans into absorbable glucose molecules at the brush border of the small intestine and is then absorbed through the glucose transporters sodium-dependent glucose cotransporter 1 (SGLT1) and glucose transporter 2 (GLUT2)[15,16][10][11].Several phytoconstituents are known to suppress the activity of α-amylase, α-glucosidase and to inhibit intestinal absorption of glucose, inhibiting postprandial hyperglycemia and keeping the concentration of glucose in the blood constant after a meal [15,17][10][12].

Other secondary metabolites can modulate the secretion of glucagon-like peptide-1 (GLP1), inhibiting dipeptidyl peptidase-4 (DPP4) from extending the effect of GLP1.In L-cells of the small intestine, basal serum GLP1 is released in response to nutrients loads (Figure 1).It promotes insulin secretion and stimulates the hypothalamus gland to induce postprandial satiety and to inhibit glucagon secretion.GLP1 has a very short half-life because it is hydrolyzed by dipeptidyl peptidase-4 (DPP4)[18,19,20][13][14][15]. 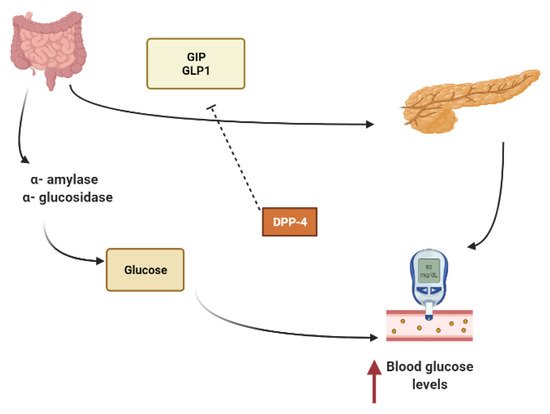 To maintain constant blood glucose levels, various body organs, including the pancreas, liver, intestine, adipose and muscle tissues with various hormones and neuropeptides, work together.The pancreas plays a crucial role in glucose homeostasis by secreting insulin and its opponent glucagon [21][16].The increased circulating glucose is sensed by pancreatic β-cells and subsequently glucose influx into the cells via GLUT2, an insulin-independent transporter (Figure 2).Glucose induces insulin secretion from β-cells via the closure of ATP-gated potassium channels and activation of voltage-gated calcium channels [16,21,22,23][11][16][17][18]. 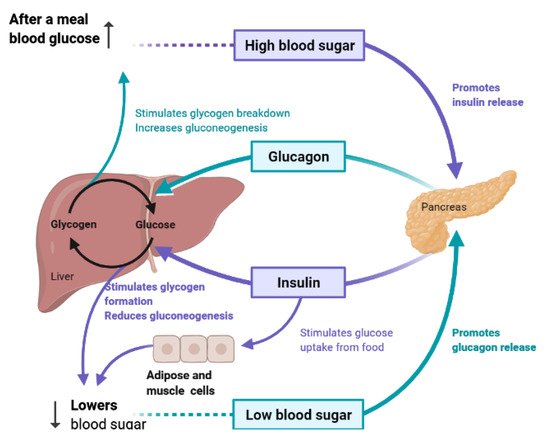 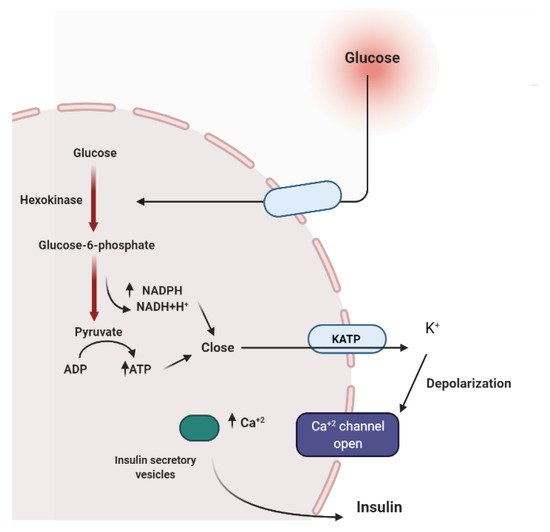 The liver is the chief organ in maintaining glucose homeostasis through controlling various pathways, including glycogenesis, glycogenolysis, glycolysis and gluconeogenesis [29][19].During feeding conditions, glucose is a primary fuel source across multiple fuel sources across numerous body tissues by eliciting ATP molecules during hydrolysis and the Krebs cycle.The increase in glucose uptake in hepatocytes promotes glycolysis and lipogenesis to generate triglycerides as storage forms of fuel [22,29][17][19].Glycolysis can be regulated through the reactions catalyzed by hexokinase, phosphofructokinase, and pyruvate kinase (Figure 5andFigure 6).Moreover, there are seven enzymes involved in this Krebs cycle, of which only two enzymes, succinate dehydrogenase and malate synthase, can be regulated.Several plant secondary metabolites (discussed below) can regulate and affect these enzymes except for the pyruvate kinase enzyme [22,30,31][17][20][21]. 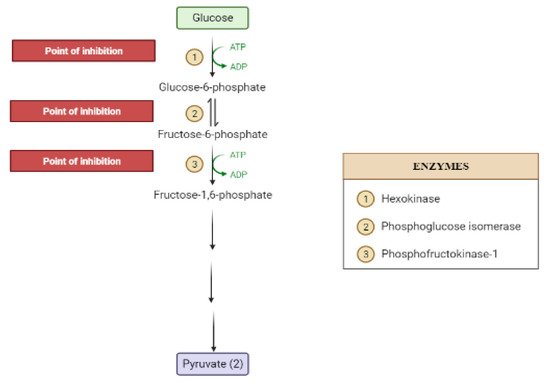 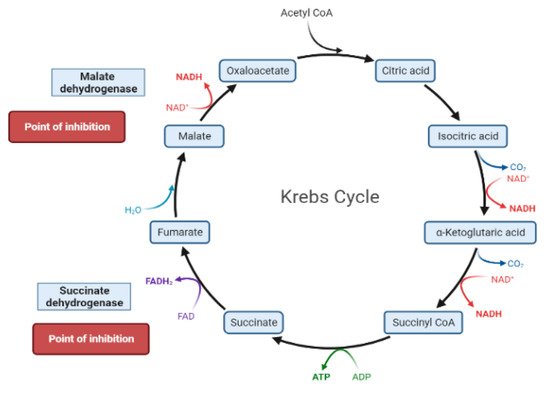 During the fasting state, the liver is the leading factory for glucose production through gluconeogenesis and glycogenolysis.The main regulatory enzymes in the gluconeogenesis pathway include glucose 6-phosphatase (G6Pase), fructose 1, 6-bisphosphatase (Fbpase1), PC (pyruvate carboxylase), and phosphoenolpyruvate carboxykinase (PEPCK), all can be inhibited by plant secondary metabolites (Figure 7)[29,30][19][20]. 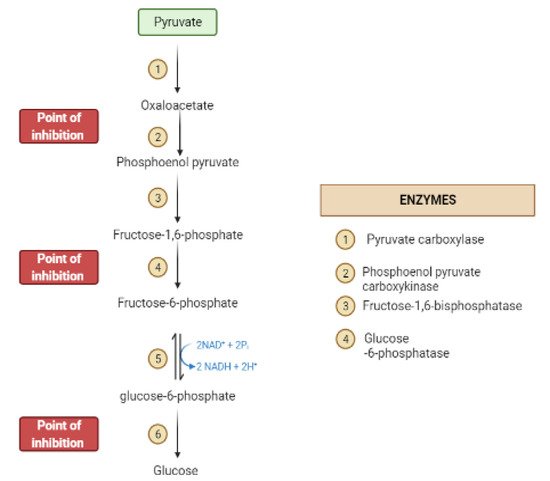 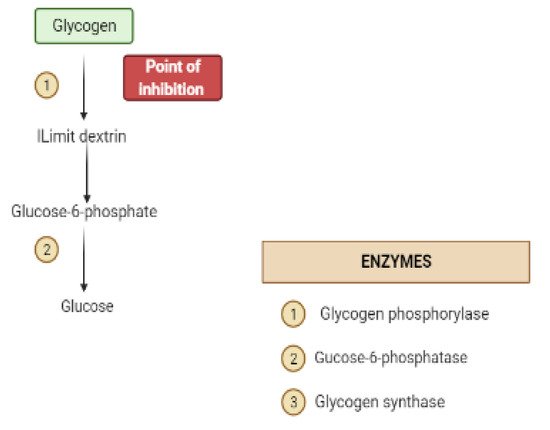 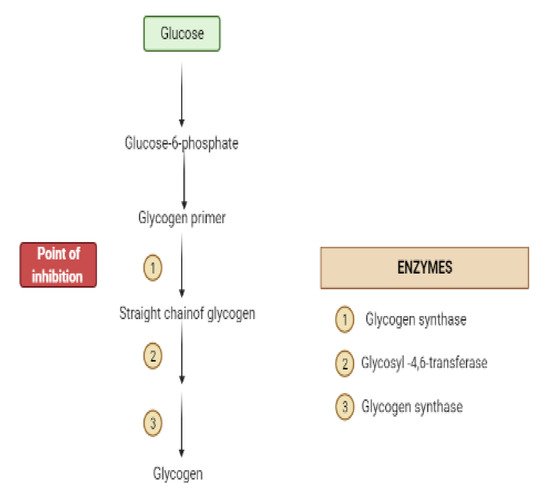 The increase in the free fatty acids is connected to alteration in the diacylglycerol (DAG)/protein kinase C (PKC) pathway.The rise in DAG activates PKC-θ, -β2 and –δ that phosphorylates IRS1, which interferes with insulin-stimulated phosphorylation of IRS1, thus inhibiting insulin signaling.It is believed that targeting PKC is beneficial in treating type 2 diabetes as it will address the secretory defect promoting insulin secretion [33,34][22][23].

Inflammatory mediators (such as TNF-α, Il-6) can impair insulin and promote serine phosphorylation of IRS-1 impairing insulin signaling or can cause degradation of IRS.It can reduce GLUT-4 expression, decreasing glucose entry to cells and cause inflammation-induced nitric oxide release that suppresses PI3K–Akt pathway [23][18].It is well-known that inflammation is a crucial cause for diabetes type-2.Relieving inflammation by secondary metabolites can improve diabetes [35][24].