Stemness and apoptosis may highlight the dichotomy between regeneration and demise in the complex pathway proceeding from ontogenesis to the end of life. In the last few years, the concept has emerged that the same microRNAs (miRNAs) can be concurrently implicated in both apoptosis-related mechanisms and cell differentiation. Whether the differentiation process gives rise to the architecture of brain areas, any long-lasting perturbation of miRNA expression can be related to the occurrence of neurodevelopmental/neuropathological conditions. Moreover, as a consequence of neural stem cell (NSC) transformation to cancer stem cells (CSCs), the fine modulation of distinct miRNAs becomes necessary. This event implies controlling the expression of pro/anti-apoptotic target genes, which is crucial for the management of neural/neural crest-derived CSCs in brain tumors, neuroblastoma, and melanoma.

From a semantic point of view, stemness and apoptosis may be conceived as two different sides of the same living pathway connecting ontogenesis to cell death, swinging from regeneration to demise. In this scenario, microRNAs (miRNAs) define a class of short length (up to 23 nucleotides) noncoding single-stranded RNA molecules acting as post-transcriptional regulators of gene expression, decisive for cell differentiation, survival, function, and dysfunction [1,2][1][2]. In a previous review, we highlighted the dramatic impact of the miRNA-target regulatory network both in human normal and tumoral neural stem cells (NSCs). In physiological conditions, not more than a dozen of miRNAs alternatively operate either for promotion or repression of neural induction. Similarly, in neural cancer stem cells (CSCs), miRNAs are recruited for a double goal: tumor suppressors or oncomiRNAs (oncomiRs) for the maintenance of CSCs and homeostasis of neuronal/glial tumors [3]. miRNAs modulate neural CSC apoptosis by inhibiting the expression of one or more target genes and by decreasing the level of the related translated proteins. If compared to non-tumor NSCs, neural CSCs show a significant downregulation of pro-apoptotic miRNAs, sometimes epigenetically inactivated by hypermethylation [4]. Upon restoration, these miRNAs can inhibit anti-apoptotic target genes, functioning as tumor-suppressive miRNAs. On the other hand, neural CSCs are characterized by the upregulation of anti-apoptotic miRNAs, which exert their control by inhibiting pro-apoptotic target pathways. These miRNAs are then considered as oncomiRs.

Moreover, the concept has emerged that the same miRNAs can be simultaneously involved in both apoptosis-related mechanisms and cell differentiation [5]. Whether the differentiation process gives rise to the architecture of brain areas, any long-lasting perturbation of miRNA expression could be related to neuropathological events. However, while the role of miRNAs in different forms of cell death has been exhaustively elucidated with regard to several organs and cancer progression [6[6][7],7], it still represents a critical task to investigate how miRNAs orchestrate cellular removal in human neurogenesis (i.e., corticogenesis) including those major niches of stemness of the adult brain, such as within the hippocampus and in the vicinity of lateral ventricles, providing that methodological tools are able to ascertain miRNA localization. 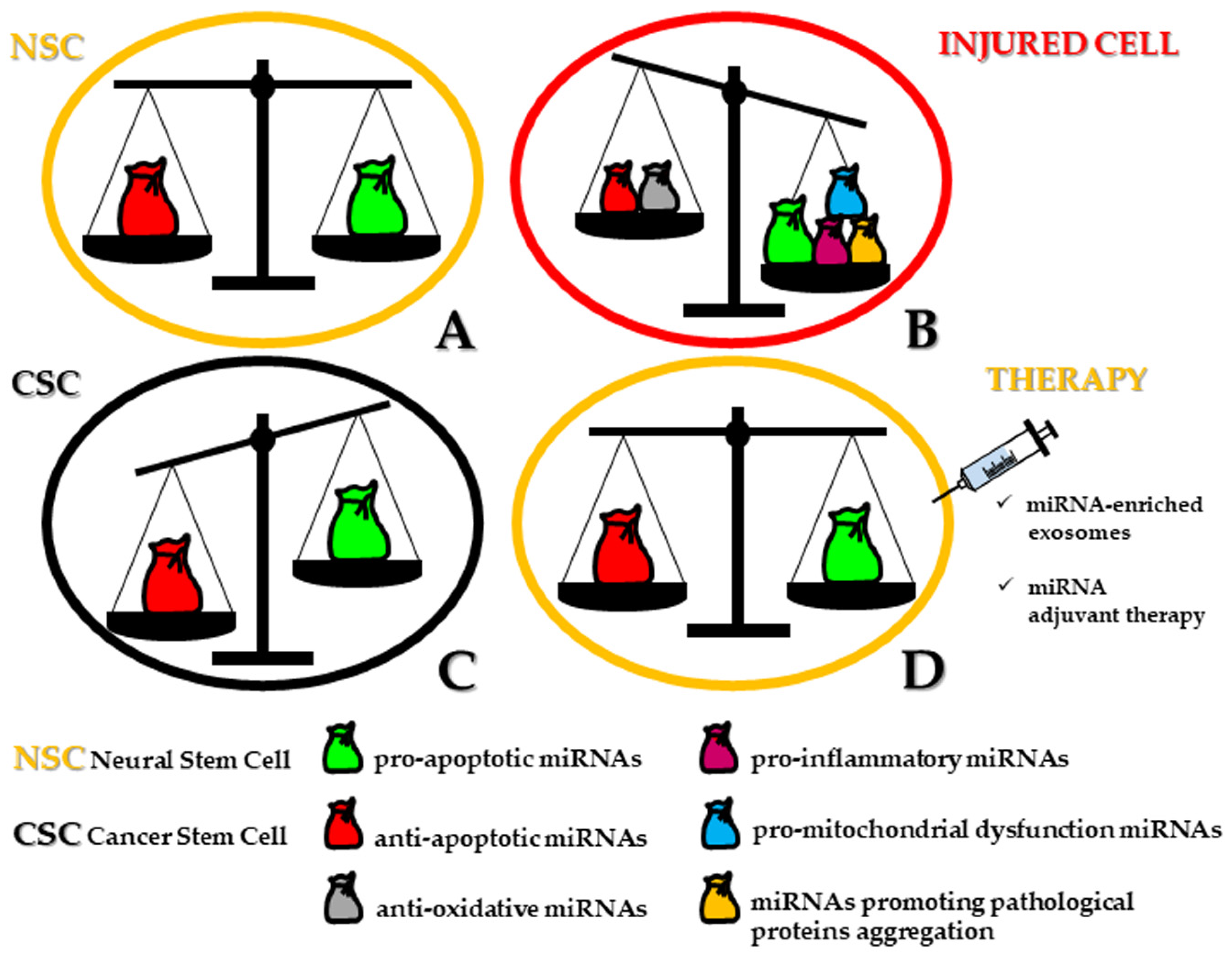 Until now, embryonic and adult neurogenesis seem to share only miR-7 [8,9][8][9], -9 [10,11,12[10][11][12][13][14][15],13,14,15], -124 [16[16][17][18],17,18], and -137 [19,20][19][20] in the following functions: up or downregulation of proliferation, neuronal migration, axonal outgrowth/branching, neuron specification, and finally neuronal survival in the murine species (Figure 1A). Indeed, scant data are present in literature dealing with apoptosis-associated miRNAs for human neural differentiation and are obtained from human cell lines that show an association with modulated levels of miR-16, let-7a and miR-34a expression [21]. Concerning miR-34a, it has gained attention for the key regulatory role in neural stem/progenitor cell differentiation and various features of neurogenesis, but it is also implicated in a plethora of neurodegenerative events, such as Alzheimer’s (AD) and Parkinson’s (PD) disease, but also in epileptic seizures and ischemic stroke, suggesting its neuroprotective modulation especially when suppressed [22]. Interestingly, the inhibition of apoptosis in mature neurons, which is mediated by the induction of Bcl-2 homology 3 domain (BH3)-only proteins, is exclusively dictated by miR-29 upregulation [23]. Moreover, the survival of neural progenitor cells (NPCs) under hypoxia has been found to be determined by the upregulation of miR-210 by means of suppressed Bcl-2 interacting protein 3 (BNIP3), which is an activator of cell death [24].

On the subject of oxygen and glucose requirements, human NSCs have shown their vulnerability below a certain threshold of these nutrients, but the abundant cell death appearance was reduced by miR-21 overexpression through the inhibition of c-Jun N-terminal kinase (JNK) and p38 mitogen-activated protein kinase (p38MAPK) pathways.

However, when neuronal cell death takes place in an autophagic fashion, in hippocampal NSCs, miRNA expression profiling is complicated by the integrated functions of at least seven specific miRNAs (miR-34b-5p, -138-5p, -351-5p, -503-5p, -542-5p) that are actively involved under insulin-deprived conditions. Therefore, during senescence, because of the limited replacement of dysfunctional neurons, the necessary goal of the neural network within the whole brain is attained by reversing or circumventing the apoptotic pathway, ultimately responsible for the symptomatic manifestation of various age-related diseases. On this matter, dysregulated miRNAs have been described in recent years as possible additional inducers of cellular stress and related vulnerability for neurons and, therefore, implicated in several neurodegenerative disorders [25] (Figure 1B).

It exceeds the purpose of this paper to describe the functions and potential applications of the numerous miRNAs in terms of diagnostic biomarkers since comprehensive reviews have been already written for AD [26,27,28][26][27][28] and PD [29,30[29][30][31],31], amyotrophic lateral sclerosis (ALS) [29[29][30][31][32],30,31,32], multiple sclerosis (MS) [33[33][34],34], traumatic brain injury (TBI) [35,36][35][36], or development-related syndromes, such as autism spectrum disorder (ASD) [37,38][37][38]. Instead, both in the central nervous system (CNS) and in the cerebral spinal fluid (CSF), miRNAs recruitment has boosted a novel impulse for the prognosis but, more strikingly, for neural regenerative medicine, shedding light on feasible translational brain applications that fill the present gap of clinical interventions represented by NSC transplantation.

Now, it is well established that during the formation of the neural network in the embryonic period and when neural regeneration occurs, neural cells release extracellular vesicles, also named exosomes, as an alternative intercellular communication beyond the classical synaptic neurotransmission. The decisive discovery has come from the observation that such exosomes are secreted by cortical neurons [39] and represent an efficient delivery method for integrating different miRNAs into the target neural cells [40,41,42,43][40][41][42][43]. Therefore, miRNAs have gained further attention because of their property to be inserted into mesenchymal stem cells (MSCs) or human induced pluripotent stem cells (hiPSCs) and to be released with a paracrine function or transported in order to follow an endocytic pathway [44].

MiRNA-associated exosomes display some advantages when isolated from the original cells, which can be enunciated as follows: first of all, the ability to cross the blood–brain barrier, inducing a minimal tumorigenic and immunogenic response but with a half-life longer in transplanted patients, and finally being insensitive with regard to proliferation and microvascular embolism. Collectively, exosomes, miRNAs and stem cells seem to depict the tiles of a puzzle defining the Holy Grail for therapeutic intervention.

As a matter of fact, the above properties have proposed that trio as the most promising candidate for the treatment of neurological diseases. Starting from the most challenging AD, the efficacy of treating neural degeneration has been evaluated in vivo in an amyloid β-peptide (Aβ)-treated rat model that was transplanted with packaged miR-29-engineered exosomes using transfected MSCs. The final result was the prevention of spatial and learning deficits typical of AD [45]. For in vitro experiments [46], the extracellular vesicles isolated from hiPSCs and enriched with miR-133, -155, -221 and -34a conferred neuroprotection to Aβ42 oligomer-treated cortical spheroids [47,48][47][48]. With regard to remyelination strategy, which could positively impact MS, rat environmental enriched exosomes have been found to be upregulated in miR-219 content, fostering the increase in myelin but reducing the observed oxidative stress because of the dramatic consequences on the number of oligodendrocyte precursors and stem cells [49].

The therapeutic efficacy and safety of exosomes and inserted miRNAs have also been evaluated for stroke, although only a few clinical trials have been conducted in stroke patients. So far, rat stroke models and NSCs derived from different tissues have been used. Patients’ plasma has been exploited for demonstrating that miR-126 is downregulated when acute ischemic stroke (AIS) occurs as well as in rat plasma and brain tissue after ischemia. Following miR-126 enrichment of adipose-derived stem cells (ADSCs)-purified exosomes, a significant reduction in neuronal cell death accompanied by a higher proliferation rate was observed. In addition, the miR-126-modified exosomes induced, in the post-stroke period, a functional recovery accompanied by a clear suppression of the inflammatory cascade [50].

Some more studies have identified in the multipotent MSCs the favorite tool for the production of miRNA-133b-bearing exosomes in rats subjected to middle cerebral artery occlusion (MCAO). In this context, the relevant contribution of astrocytes by the secretion of exosomes containing miR-133b in trophic activity for the neuronal plasticity in terms of neurite branching and elongation has been elucidated [51].

In a different experimental setting, performing administration of MSC-miR-146a-5p-exosomes, there was a confirmation of restored neurological functions, and reduced neuronal demise was associated with the inhibition of microglia in terms of M1 polarization, which accounted for the decreased expression of some pro-inflammatory mediators [53].

When NSCs were subjected to oxygen–glucose deprivation/reoxygenation for mimicking the ischemic stroke manifestation, the miR-26a exosomes from human urine-derived stem cells were able to promote both proliferation and neuronal differentiation, revealing an alternative strategy to hinder brain ischemia [54].

However, most of the available data in literature dealing with exosomes and miRNAs refer to traumatic brain and spinal cord injury (SCI). Recently, some scientists have focused on the involvement of microglial exosomes carrying miR-124-3p as cargo, whose beneficial effects were described as neuronal survival by switching M2 polarization in microglia and therefore inhibiting neuroinflammation [55]. Further evidence has been provided by showing that exosome-associated miR-124 administration increased hippocampal neurogenesis and functional recovery in the same way by silencing the Toll-like receptor 4 (TLR4) pathway [56]. In addition, the neurite outgrowth could be ascribed to microglial-derived exosomes enriched in miR-124-3p and entailing neuronal autophagy [57]. Further, repetitive mild traumatic brain injury (rmTBI) has been thought as an important risk factor for long-term neurodegenerative disorders such as AD, where microglial exosomes have exhibited a cardinal role in the transportation, distribution, and clearance of Aβ. In particular, the miR-124-3p level in microglial exosomes from an injured brain was significantly changed in the acute, sub-acute, and chronic phases after rmTBI. The effects were accomplished by miR-124-3p targeting RELA proto-oncogene, NF-KB p65 subunit (RELA), an inhibitory transcription factor of apolipoprotein E (ApoE) that endorses β-amyloid proteolytic breakdown. In mice with rmTBI, neurons of injured brains could internalize the intravenously injected microglial exosomes and ultimately gave a robust contribution to prevent neuronal death [58].

In patients with SCI, relevant evidence for the recovery of neurological functions has been reported with regard to the positive modulation of miR-21 derived from the exosomes of MSCs [59]. This last finding has been also confirmed by a paper in which not only miR-21 but also miR-19b was found to be increased in extracellular vesicles from isolated MSCs and consequently were effective in apoptosis inhibition by means of downregulation of phosphatase and tensin homolog (PTEN) messenger RNA (mRNA) [60]. The mechanism by which MSC-derived exosomes carry out their neuroprotective effects on motor function and apoptosis has been found following the modulation of Fas cell surface death receptor ligand (FASL) gene axis [61].

miR-133b has been recognized as an important actor for the differentiation of neurons and the outgrowth of neurites. In this perspective, exosomes derived from miR-133b-modified MSCs have been found to induce recovery of hindlimb function after injection in rats with SCI, by activation of the extracellular regulated kinase 1/2 (ERK1/2), signal transducer and activator of transcription 3 (STAT3), and cAMP response element-binding protein (CREB) pathways [62]. These results were replicated by a study where, in addition to the significative increase in those genes, neurofilament (NF), growth associated protein 43 (GAP43), glial fibrillary acidic protein (GFAP), and myelin basic protein (MBP) were also upregulated in SCI rats [63].

Exosomes from miR-29b-modified MSCs were also able to repair SCI when injected in rats with an increased score for hindlimb motor function [64].