Technological dualism was proposed by Benjamin Higgins. He was the Ritchie Professor of Economics at the University of Melbourne in the late 1940s. His theory explains the causes of unemployment in the underdeveloped economies. Developing countries of today are often characterized by dualistic economies. One is the modern (or formal) sector while the other is the traditional (informal) sector. Their relation has been explained by Higgins in his theory explained below.

The theory of technological dualism comes under the subject of development economics. This theory was propounded by Benjamin Higgins in place of Social dualism theory by Professor Boeke. In the words of Prof Higgins "dualism is the situation in which productive employment opportunities are limited not because of lack of effective demand but because of resource and technological constraints in the two sector". The two sector here means the traditional rural sector and modern sector. This theory is prevalent in less developed countries. According to Prof Higgins this is the cause of unemployment and underemployment in these less developed countries. The traditional rural sector and the modern sector both use different production function and have different resource endowments and this is the reason for technological dualism in these less developed economies.[1]

There are two fundamental basis of technological dualism

There are differences in the production function in the two sectors. There are fixed technical coefficients in the modern sector whereas in case of traditional sector the technical coefficients are variable. This duality is analyzed by Higgins in the context of Factor Proportions. Prof Eckaus offers a detailed explanation of this feature. This will be explained later on in this topic. This concept of Factor Proportion is used by Higgins for the analysis of the unemployment in the underdeveloped countries.

There is a difference in availability of labour and capital this forms the fundamental basis of technological dualism. In the modern sector more amount of capital than labour is observed so therefore capital intensive techniques would be used. In the traditional sector more of labour is present than capital. So here labour-intensive techniques will be incorporated. Thus two distinct techniques of production can be observed in these two sectors.[2]

As mentioned above in case of technological dualism the economy is divided into traditional sector and modern sector. Following are some characteristics of these sector.

1) Agriculture, cottage industries and small industries are the main occupations of this sector.

1) Large-scale industries, plantation, transport, oil fields are the main occupation in this sector.

2) As it is the modern Sector hence capital intensive production is prevalent.

4) There is a limited degree of technical substitutability of factors and the production is characterized by fixed technical coefficients.[2]

Two factors of production (labour and capital) and two goods is the assumption taken to show the technological dualism in the two sectors. 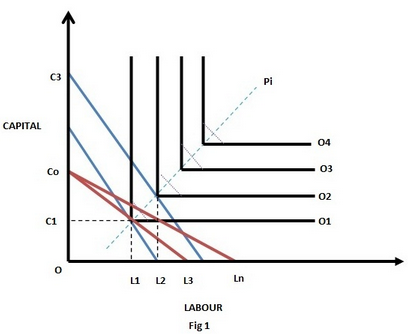 The production function in the industrial sector is shown. The horizontal axis depicts Labour and the vertical axis is Capital. The curves which are isoquants show the combination of labour and capital at some given level of output. The higher the curve the higher the levels of output i.e. O1 level of output is least and as you go to O2, O3, O4 the output level increases. The dotted line Pi shows the expansion path of the modern sector. From the figure 1 we can see that the production process is capital intensive. For instance, to get an output of O1 then OC1 amount of capital will be used and OL1 units of labour will be employed. If OL2 units are available the excess supply of labour would not have any effect on production techniques and L1L2 (excess labour) will remain unemployed or will try to seek employment in the traditional sector. This proves that only when the capital increases more labour will be taken in and output will be expanded. In this case the labour and capital have to be used in fixed proportion to get any output. As we know the production process is capital intensive. Figure 1 shows that OC1 units of capital is used and OL1 units of labour is employed to get Q1 units of output. if the availability of capital increases the producer would shift to the higher isoquant curve showing higher level of output. Huggins argues that the technical coefficients are not as rigidly fixed and therefore the small slanting dotted lines where two isoquants meet in the figure above show that they are somewhat flexible.f there are very large differences in the factor endowments such as given by CoLn the entrepreneurs would probably think of using more labour-intensive technique. The slope of the expansion path (Pi) shows that despite the increase in capital and output there is no significant improvement in the employment.[3]

Initially this absorption takes place by getting more land under cultivation so as to keep the ratio of labour to land constant. For sometime the capital and labour combination remain constant as the output rises from O1 to O3 as given in Figure 2. As resources are not unlimited the good land tends to become scarce and due to inflow of labour the ratio of labour to capital in the sector rises and hence the techniques tend to become increasingly labour-intensive. When the point On is reached all the available land has already been cultivated due to the high intensive labour techniques used and the marginal productivity of labour falls below zero. Disguised unemployment starts making an appearance at this point. Under these condition there is no incentive for farmers to or small industries to make an investment in this sector even if they have the money to invest. Nor will they be interested in introducing labour saving innovations even if they knew about them. Since labour supply is in excess therefore labour as a group is not interested in increasing their efforts. Thus methods of production remain labour-intensive and economic and social welfare remain low.[3]

As mentioned earlier in this topic we will discuss the factor proportion problem as incorporated by Prof Higgins in his theory. This problem was discussed by Prof Eckaus in detail in his study. Prof Eckaus begins with a simple case where one good is produced in the economy, national product, with two factors of production labour and capital. It is assumed by him that the factors given are used in fixed proportions. Eckaus finds out that the relatively abundant factor i.e. labour faces structural unemployment. This happens even if the technique used is labour-intensive. So from his study it showed that structural unemployment of labour exists even when labour-intensive technique is used. In the next step the national product is divided into two goods-one is output of local enterprises which are relatively more labour-intensive and output of western enterprises which are relatively more capital intensive. Again the result is the same very high capital-labour ratio results in structural unemployment of labour. This cannot be removed even if prce is adjusted, or by creation of increased effective demand. This conclusion remains unchanged even if variable coefficients replace the fixed coefficients in the more labour-intensive field of employment. Some of the reasons for aggravation of these structural employment is 1) If the technological progress takes a form of capital intensive sector. 2) If the rate of population growth is higher than the rate of capital accumulation in the labour sector. 3) If government policies or the trade union are able to increase the wages to a higher level.[3]

Higgins in his theory of technological dualism shows us that technological dualism in underdeveloped countries is the cause of unemployment and disguised unemployment. He thinks that the development in the modern sector can take place if foreign capital is present in the economy. As a result of this industrialization in these economies do not cause capital formation instead they are associated with ever increase in population. This is the reason for unemployment in these under developed economies.

Prof Higgins' theory is more realistic as compared to the Boeke theory of social dualism. His theory clearly explains the reasons for unemployment in the underdeveloped countries. Higgins' theory is not free of criticism; some of the criticisms are given below:

2) It is questionable to assume that development of the industrial sector is dependent entirely on imported technology.

3) He gives importance to only technical factors affecting labour and capital whereas social and psychological factors are completely ignored.

4) His theory is based on the assumption that technical coefficients are fixed in the modern sector. However a little degree of elasticity cannot be ruled out completely. This makes his assumption questionable.

5) The theory explains the underemployment in the traditional sector but it does not provide a solution.[2]