Since “two-path unifying theory” of hemostasis was published, it has been confirmed that hemostasis is blood clotting mechanism forming “hemostatic plug” in bleeding from external and internal bodily injury, and is also thrombosis promoting mechanism in intravascular injury by producing “thrombus”.

1. The Identity of Thrombosis

The most important principle is “Hemostasis can be activated only by vascular injury”. As shown in Figure 3 on the schematic histological structure of vascular wall, it is critically important to understand the damaged blood vessel wall must be repaired by the released hemostatic components (i.e., ULVWF/FVIII and TF) from the vessel wall in cooperation with coagulation factors present in blood (i.e., platelet, FVII, FIX, FX, FV, FII and fibrinogen) at the damaged area of the vessel wall. This is true in both external and internal bodily injury, and in intravascular injury [3]. Without a vascular injury, there is no release of ULVWF/FVIII from the endothelium (i.e., ECs) and TF from the subendothelial tissue (SET) and/or extravascular tissue (EVT), which means hemostasis never occurs if there is no release of ULVWF/FVIII and/or TF. In another word, hemostasis is not needed without a vascular damage, and thrombosis/coagulation does not develop in the absence of vascular injury. For example, a hemophilic person with FVIII deficiency never bleeds in the absence of a vascular injury. So is very true that thrombosis and coagulopathy do not occur without a vascular injury. This concept has a very important philosophical impact in the management of every hemostatic disorder. 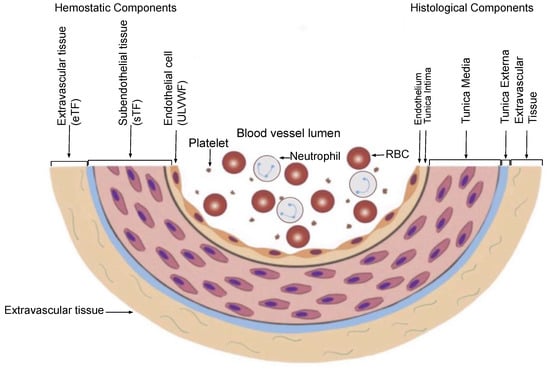 Figure 3. Schematic illustration of cross section of blood vessel histology and hemostatic components (Reproduced and modified with permission from Chang JC. Clin Appl Thromb Hemost 2019 Jan-Dec; 25:1076029619887437). The blood vessel wall is the site of hemostasis (coagulation) in vivo to produce blood clots (hemostatic plug) and stop hemorrhage in the external bodily injury. It is also the site of hemostasis (thrombogenesis) to produce intravascular blood clots (thrombus) in the intravascular injury to cause thrombosis. Its histologic components are divided into the endothelium, tunica intima, tunica media and tunica externa, and each component has its function contributing to molecular hemostasis. As illustrated, ECs damage triggers the exocytosis of ULVWF/FVIII and SET damage promotes the release of sTF from the tunica intima, tunica media and tunica externa. EVT damage releases of eTF from the outside of blood vessel wall. This depth of blood vessel wall injury contributes to the genesis of different thrombotic disorders such as microthrombosis, macrothrombosis, fibrin clots, thrombo-hemorrhagic clots and various endotheliopathic syndromes. This concept based on the blood vessel wall model is especially important in the understanding of different phenotypes of stroke and heart attack. Abbreviations: EVT, extravascular tissue; eTF, extravascular tissue factor; SET, subendothelial tissue; sTF, subendothelial tissue factor; RBC, red blood cells; ULVWF, ultra large von Willebrand factor.
The second principle is “Hemostasis must be activated through ULVWF path and/or TF path”, which differentiate microthrombosis (i.e., endotheliopathy) due to activated ULVWF path in vascular wall damage limited to ECs from macrothrombosis (e.g., deep venous thrombosis) due to activated ULVWF path and activated TF path in vascular damage extending from EC to SET/EVT. Microthrombosis is the result of microthrombogenesis, and macrothrombosis is the result of macrothrombogenesis as depicted in Figure 1. This notion supports that activated ULVWF path in extensive endotheliopathy produces microthrombi strings composed of platelet-ULVWF/FVIII complexes, but activated TF path with minimum release of ULVWF in localized intravascular trauma produces macrothrombus made of platelet-ULVWF/FVIII complexes and fibrin-thrombin clots. This principle supports (1) vascular injury is the initiating point of hemostasis, (2) every thrombosis except a few conditions—which will be discussed later—should be the result of vascular injury, and (3) bleeding or thrombosis does not occur without a vascular injury, even in hemophilia and thrombophilia [4].
The primary clinical phenotype of thrombosis is determined by the depth, extent and location of the vascular injury and intrinsic character of thrombus formed at different vascular milieux. Further, endotheliopathy is typically associated with ECs damage occurring in the disease such as sepsis (e.g., bacterial and viral sepsis) resulting in disseminated endotheliopathy-associated vascular microthrombotic disease (e.g., EA-VMTD), but the ECs/SET/EVT damage occurs with a local vascular injury such as trauma and in-hospital vascular accesses (e.g., surgery, indwelling vascular device) resulting in local macrothrombus. The former is a systemic disease due to activated ULVWF path and produces disseminated microthrombosis, but the latter is a localized disease due to activated TF path with minimum ULVWF path and produces local macrothrombosis.
Therefore, three thrombogenetic mechanisms can be recognized in a vascular injury depending upon the depth of vascular wall damage and the extent of vascular tree involvement. These are (1) microthrombogenesis, (2) fibrinogenesis, and (3) macrothrombogenesis as illustrated in Figure 1. This basic conceptual understanding of hemostasis has major implication in identifying and classifying the phenotypes of thrombotic disorders in intravascular injury.

The intravascular injury involving ECs and/or SET/EVT from the inside of the vessel wall provokes endotheliopathy and/or intravascular bleeding, which triggers intravascular hemostasis leading to microthrombogenesis or macrothrombogenesis [3,4]. Thus, “thrombogenesis” is a term denoted for “activated hemostasis producing bloods clots in intravascular injury”. It includes microthrombogenesis producing microthrombi strings, fibrinogenesis producing fibrin meshes, and finally macrothrombogenesis forming macrothrombus by the unifying mechanism of microthrombi strings and fibrin meshes (Figure 1). Until recently, molecular pathogenesis of thrombosis has not been established despite of intensive theoretical studies to prove the dogmatic concept of Virchow’s triad. The term “thrombosis” broadly encompasses every disease produced by every blood clot, caused by the disorders due to fibrin clots, which unknowingly has included microthrombi, macrothrombus, and combined micro-macrothrombi present in the arterial and venous systems. Additionally, included are non-hemostatic thrombotic diseases that are not triggered by a vascular injury. These include thrombotic thrombocytopenic purpura (TTP), fibrin clot disease of acute promyelocytic leukemia (APL), and heparin-induced thrombocytopenia with white clot syndrome (HIT-WCS). These three disorders are not due to hemostatic activation since they occur without a vascular injury [4].

The descriptive terms for thrombosis such as deep venous thrombosis (DVT), aortic arch thrombosis, acute ischemic stroke (AIS), acute myocardial infarction (AMI), venous thromboembolism (VTE), pulmonary thromboembolism (PTE), inferior vena cava thrombosis (IVCT), superior vena cava thrombosis (SVCT), splanchnic vein thrombosis (SVT), portal vein thrombosis (PVT), Budd-Chiari syndrome (BCS), cerebral venous sinus thrombosis (CVST), microvascular thrombosis, thrombotic thrombocytopenic purpura (TTP), TTP-like syndrome, sinusoidal obstructive syndrome (SOS), veno-occlusive disease (VOD), symmetrical peripheral gangrene (SPG), diabetic gangrene, thrombosis of paroxysmal nocturnal hemoglobinuria (PNH), vaccine-associated thrombocytopenia and thrombosis, and disseminated intravascular coagulation (“DIC”) have been customarily utilized to express localization-denoted diagnosis of thrombotic disorders. However, their thrombogeneses based on underlying molecular events have not been established in any of each thrombosis, but presumed to be the results of activated TF path-initiated coagulation cascade following vascular injury. Thus, the prevailing concept has been all of the thrombosis is the same disease in their character due to the same hemostatic (coagulation) process, and differently expressed phenotypes are the results of different vascular localization (e.g., artery/vein, macrovasculature/microvasculature, or vessels of the heart, lungs, brain, kidneys and other organs).
Now it is obvious that “thrombosis” is a non-specific generic term representing “blood clot(s)” without defining its origin, pathogenesis, character, pathology and/or clinical expression of dysfunction of the organ or tissue. This term provides an insufficient description in applying to clinical practice and educational system for the diagnosis and treatment [10,11]. Further, thrombosis has been improperly thought to be blood clot(s) caused by risk factors such as old age, affluent economic status, immobilization, prolonged high altitude flying, drug, pregnancy, and associated diseases such as diabetes, infection, autoimmune disease, cancer and sepsis, thrombophilia, and even earthquake. To the contrary, according to hemostatic fundamentals (Table 2), the true risk “event” of thrombosis is only “one”, which is an intravascular wall damage resulting from intravascular injury. Indeed, the above observational risk factors are not true risk factors for thrombosis, but are rather contributing events to vascular injury or potentiating factors for thrombosis after a vascular injury has occurred [12].
The use of the simplified term “thrombosis” to define every “blood clot(s)” disorder should be discouraged and replaced with better term representing its genesis, pathogenesis, character, and/or pathology with consideration of localization in the clinical medicine and scientific medical literature. For example, “microthrombosis” in the lungs of COVID-19 sepsis is a well-defined hemostatic disorder provoking acute respiratory distress syndrome (ARDS) [13] caused by EA-VMTD. Additionally, “macrothrombosis” of PTE in the lungs travelled from VTE of the venous system is a well-defined hemostatic disorder provoked by another vascular injury (e.g., vascular access), which vascular injury is not directly related to ARDS [14]. These two disorders, microthrombosis of ARDS and macrothrombosis from PTE in COVID-19 infection, are uniquely different in their genesis, pathogenesis and pathology as well as the intrinsic character of thrombi [11,14]. Sometimes other “thrombosis” phenotypes occurring COVID-19 infection or its vaccination have included not only microthrombosis and macrothrombosis, but also other descriptive terms such as CVST [15,16], SVT [17], SPG [18], acrocyanosis [19], COVID toes [20] and many others. These are neither microthrombosis (e.g., ARDS) nor common macrothrombosis seen in distal DVT in their thrombotic character, but are the manifestations of combined micro-macrothrombosis resulting from the unifying mechanism of two different origins of blood clots which are the microthrombi strings from sepsis and the fibrin meshes from in-hospital vascular injury [10,11].