A Diet Coke and Mentos eruption (also known as a soda geyser) is a reaction between the carbonated beverage Diet Coke and Mentos mints that causes the beverage to spray out of its container. The candies catalyze the release of gas from the beverage, which creates an eruption that pushes most of the liquid up and out of the bottle. Lee Marek and "Marek's Kid Scientists" were the first to publicly demonstrate the experiment on the Late Show with David Letterman in 1999. Steve Spangler's televised demonstration of the eruption in 2005 became popular on YouTube, launching a chain of several other Diet Coke and Mentos experiment viral videos.

In the 1980s, Wint-O-Green Life Savers were used to create soda geysers. The tubes of candies were threaded onto a pipe cleaner and dropped into the soft drink to create a geyser. At the end of the 1990s, the manufacturer of Wintergreen Lifesavers increased the size of the mints and they no longer fit in the mouth of soda bottles. Science teachers found that Mint Mentos candies had the same effect when dropped into a bottle of any carbonated soft drink.[1]

Lee Marek and "Marek's Kid Scientists" performed the Diet Coke and Mentos experiment on the Late Show with David Letterman in 1999.[2][3][4] In March 2002, Steve Spangler, a science educator, did the demonstration on KUSA-TV, an NBC affiliate, in Denver, Colorado.[5] The Diet Coke and Mentos geyser experiment became an internet sensation in September 2005. The experiment became a subject of the television show MythBusters in 2006.[4][6] Spangler signed a licensing agreement with Perfetti Van Melle, the maker of Mentos, after inventing an apparatus aimed to make it easier to drop the Mentos into the bottle and produce a large soda geyser.[7] Amazing Toys, Spangler's toy company, released the Geyser Tube toys in February 2007.[8] In October 2010, a Guinness World Record of 2,865 simultaneous geysers was set at an event organized by Perfetti Van Melle at the SM Mall of Asia Complex, in Manila, Philippines.[9] This record was afterwards beaten in November 2014 by another event organized by Perfetti Van Melle and Chupa Chups in León, Guanajuato, Mexico, where 4,334 Mentos and soda fountains were set off simultaneously.[10]

The eruption is caused by a physical reaction, rather than any chemical reaction. The addition of the Mentos leads to the rapid nucleation of carbon dioxide gas bubbles precipitating out of solution:[11][12][13][14] 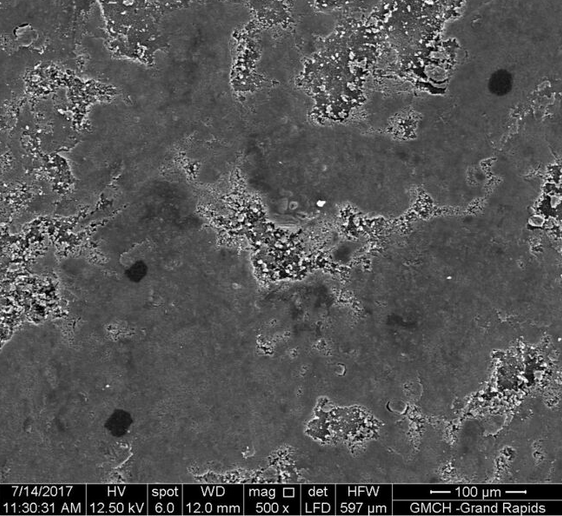 SEM image of the surface of a Mentos candy.

The conversion of dissolved carbon dioxide to gaseous carbon dioxide forms rapidly expanding gas bubbles in the soda, which pushes the beverage contents out of the container. Gases, in general, are more soluble in liquids at elevated pressures. Carbonated sodas contain elevated levels of carbon dioxide under pressure. The solution becomes supersaturated with carbon dioxide when the bottle is opened, and the pressure is released. Under these conditions, carbon dioxide begins to precipitate from solution, forming gas bubbles.

The activation energy for bubble nucleation (formation of bubbles) depends on where the bubble forms. It is very high for bubbles that form in the liquid itself (homogeneous nucleation), and much lower if bubble growth occurs within tiny bubbles trapped in some other surface (heterogeneous nucleation). Bubble nucleation and growth in carbonated beverages almost always occurs by heterogeneous nucleation: diffusion of carbon dioxide into pre-existing bubbles within the beverage.[14][15][16][17] When dissolved gas diffuses into bubbles that already exist in a liquid, it is called Type IV bubble nucleation.[15] When the pressure is released from a soda bottle upon opening it, dissolved carbon dioxide can escape into any tiny bubble located within the beverage. These ready-made bubbles (which are nucleation sites) exist in things such as tiny fibers or non-wettable crevices on the sides of the bottle.[15][16][17] Because there usually are very few of such pre-existing bubbles, the degassing process is slow. Mentos candies contain millions of cavities that remain unwetted when added to a soda. Because of this, addition of Mentos candies to a carbonated beverage provides enormous numbers of pre-existing bubbles into which dissolved carbon dioxide can escape. Thus, adding Mentos candies to a carbonated beverage introduces millions of nucleation sites into the drink, which allows for degassing that is rapid enough to support a jet of foam out of a bottle.

Pre-existing bubbles provide a way for the reaction to occur without requiring bubbles to form within the liquid itself (homogeneous nucleation). Because Type IV nucleation sites (such as found on Mentos) allow the reaction to proceed with a substantially lower activation energy, Mentos candies can appropriately be considered a catalyst of the process.[15] As another example, dropping grains of salt or sand into the solution provides Type IV nucleation sites, lowers the activation energy compared to that of homogeneous nucleation, and increases the rate of carbon dioxide precipitation.

The physical reaction that drives the eruption also causes a chemical reaction that slightly increases the pH of the soda.[13] This is because when carbon dioxide is dissolved in water, carbonic acid is formed:

The physical characteristics of Mentos (surface roughness) have the effect of drastically reducing the activation energy for carbon dioxide bubble formation, so that the nucleation rate becomes exceedingly high. The activation energy for the release of carbon dioxide from Diet Coke by addition of Mentos has been found to be 25 kJ mol−1.[13] The foaming is aided by the presence of food additives such as potassium benzoate, aspartame, sugars, and flavorings in Diet Coke, [11] all which influence the degree to which water can foam.[4][6][9][11] It has been claimed that gelatin and gum arabic in the Mentos candy enhance the fountain,[4][6][18] but experiments have shown that these candy additives have no effect on the fountain.[14]

The nucleation reaction can start with any heterogeneous surface, such as rock salt, but Mentos have been found to work better than most.[1][6][9] Tonya Coffey, a physicist at Appalachian State University, suggested that the aspartame in diet drinks lowers the surface tension in the water and causes a bigger reaction, but that caffeine does not accelerate the process. It has also been shown that a wide variety of beverage additives such as sugars, citric acid, and natural flavors can also enhance fountain heights.[11] In some cases, dissolved solids that increase the surface tension of water (such as sugars) also increase fountain heights.[11] These results suggest that additives serve to enhance geyser heights not by decreasing surface tension, but rather by decreasing bubble coalescence. Decreased bubble coalescence leads to smaller bubble sizes and greater foaming ability in water.[19][20] Thus, the geyser reaction will still work even using sugared drinks, but diet is commonly used both for the sake of a larger geyser as well as to avoid having to clean up the stickier residue left by a sugared soda.[12][21]