According to 2012 Amendments to the Zero Emission Vehicle Regulations adopted in March 2012 by the California Air Resources Board (CARB), a range-extended battery-electric vehicle, designated as BEVx, should comply, among others, with the following criteria:[2] 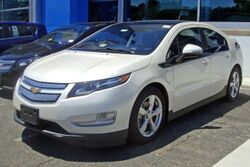 The Chevrolet Volt is a series plug-in hybrid referred by General Motors as "an electric car with extended range."

General Motors describes the Chevrolet Volt as an electric vehicle equipped with a 16 kWh battery plus a "range extending" gasoline powered internal combustion engine (ICE) as a genset and therefore dubbed the Volt an "Extended Range Electric Vehicle" or E-REV.[5][6][7] In a January 2011 interview, the Chevy Volt's Global Chief Engineer, Pamela Fletcher, referred to the Volt as "an electric car with extended range."[8] The Volt operates as a purely electric car for the first 40 to 80 km (25 to 50 miles) in charge-depleting mode. When the battery capacity drops below a pre-established threshold from full charge, the vehicle enters charge-sustaining mode, and the Volt's control system will select the most optimally efficient drive mode to improve performance and boost high-speed efficiency.[5][9][10]

According to General Motors' real time tally of miles driven by Volt owners in North America, by mid June 2014 they had accumulated more than 800 million all-electric km (500 million miles). GM also reported that Volt owners driving is more than 63% in all-electric mode. Volt owners who charge regularly typically drive more than 1,560 km (970 miles) between fill-ups and visit the gasoline station less than once a month.[11] A similar report, issued by GM in August 2016, reported that Volt owners have accumulated almost 2.4 billion km (1.5 billion miles) driven in EV mode, representing 60% of their total miles traveled.[12] 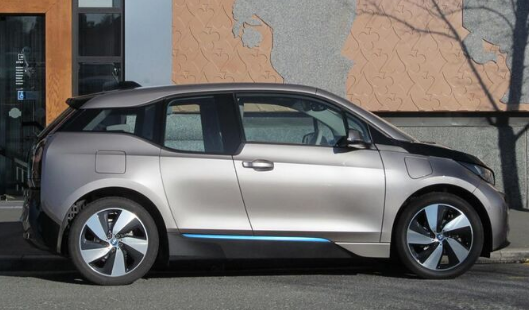 An optional range-extender is available for the BMW i3, which allows the car to qualify as a range-extended battery-electric vehicle (BEVx) according to the California Air Resources Board regulations.

The BMW i3 all-electric car with at least 22 kWh battery capacity offers an optional gasoline-powered range extender APU.[13] The range extender is the same 647 cc two-cylinder gasoline engine used in the BMW C650 GT scooter with a 9 L (2.0 imp gal; 2.4 US gal) fuel tank. The US model offers a smaller 7 L tank. The range extender engages when the battery level drops to 6%. It generates electricity to extend the range from 130–160 km (80–100 mi) to 240–300 km (150–190 mi)[14][15] Performance in range-extending mode may be more limited than when it is running on battery power, as BMW designed the range extender as a backup to enable reaching a recharging location.[16]

According to BMW, at the beginning of the i3 release, the use of range-extender was much more than the carmaker expected, more than 60%. Over time it has decreased significantly, with some people almost never using it, and by 2016 it is being regularly used in fewer than 5% of i3s.[17]

The range-extender option of the BMW i3 was designed to meet the CARB regulation for an auxiliary power unit (APU) called REx. According to rules CARB adopted in March 2012, the 2014 BMW i3 with a REx unit fitted will be the first car to qualify as a range-extended battery-electric vehicle or "BEVx." CARB describes this type of electric vehicle as "a relatively high-electric range battery-electric vehicle (BEV) to which an APU is added." The APU, which maintains battery charge at about 6% after the pack has been depleted in normal use, is strictly limited in the additional range it can provide.[2][21]

The discontinued Fisker Karma was an extended-range electric vehicle.

Other range-extended electric vehicles include the discontinued Cadillac ELR and the discontinued Fisker Karma.[22][23][24] In June 2016, Nissan announced it will introduce a compact range extender car in Japan before March 2017. The series plug-in hybrid will use a new hybrid system, dubbed e-Power, which debuted with the Nissan Gripz concept crossover showcased at the 2015 Frankfurt Auto Show.[25]

The LEVC TX London taxi was launched in 2017 and features a 33 kWh battery that is charged by a 1.5-litre petrol engine.[26]

This approach has also been used for heavy vehicles, such as Wrightbus's Gemini 2[27] and New Routemaster[28] buses.

The 2010 Wolverine 3 program included an ICE range extender for its unmanned aerial vehicle.[29]