In linguistics, especially within generative grammar, phi features (denoted with the Greek letter φ 'phi') are the semantic features of person, number, gender, and case, as encoded in pronominal agreement with nouns and pronouns (the latter are said to consist only of phi-features, containing no lexical head). Several other features are included in the set of phi-features, such as the categorical features ±N (nominal) and ±V (verbal), which can be used to describe lexical categories and case features. Phi-features are often thought of as the "silent" features that exist on lexical heads (or, according to some theories, within the syntactic structure) that are understood for number, gender, person or reflexivity. Due to their silent nature, phi-features are often only understood if someone is a native speaker of a language, or if the translation includes a gloss of all these features. Many languages exhibit a pro-drop phenomenon which means that they rely on other lexical categories to determine the phi-features of the lexical heads.

In English, person agreement is understood in the pronoun or noun overtly, while the verb carries the agreement marker to agree with the person phi-features on the noun. For English, there is only one verb agreement required for the third person singular in the present tense (usually -s), as seen in the table[3]:

In a null-subject language such as Italian, however, pronominal subjects are not required (in fact, in many null subject languages, producing overt subjects is a sign of non-nativity). These type of "unstressed" pronouns are called clitic pronouns. Therefore, Italian uses a different inflectional morphology on verbs that is based on the person features of the nominal subject it agrees with[4]:

cammino (I walk), camminiamo (we walk)

cammini (you walk), camminate (you all walk)

The grammatical term number is the name of the system contrasting singular and plural[5]. In English, number agreement is not expressed through agreement of verbal elements like they are in other languages. This is partly because English is a language that requires subjects and the subjects in English overtly express number. Instead, English number is a phi-feature that is inflected on nouns when the nominal phrase is plural. The most common in English is -s inflected on nouns that are plural:

Some cases of plurality in English require conjugation of the entire noun to express the phi-feature of plurality:

Neither verbs nor adjectives are used to agree with the number feature of the noun that they are agreeing with in English.

Some languages, however, like Salish Halkomelem, differ from English in their syntactic categorization of plural marking. Halkomelem allows for both marked and unmarked plural forms of its' nouns. It also allows for the determiners to be marked or unmarked in their plurality. Plural nouns and determiners in Halkomelem can be freely combined as well, but it appears that if a determiner is plural in a phrase it is sufficient to pluralize the noun that it modifies[6]:

English is a language that does not have nominal phrases that belong to a gender class where agreement of other elements in the phrase is required. Dutch is another language that only differentiates between neuter and the common gender[7]. Many other languages of the world do have gender classes. German, for example, has three genders; feminine, masculine and neuter[7]. For a Romance language like Italian, there are feminine and masculine genders. Inflections on the adjectives and determiners are used for gender agreement within the pronominal phrase[8].

English only expresses gender when the pronoun addresses a specific person who semantically belongs to a certain gender. See the table below for Pronominal Case Forms in English under 3 sg. fem/masc.

The phi-feature of case is explicit in English only for pronominal forms (see the picture of the table for Pronominal Case Forms in English). English is not a language that has inflectional case forms for proper nouns. 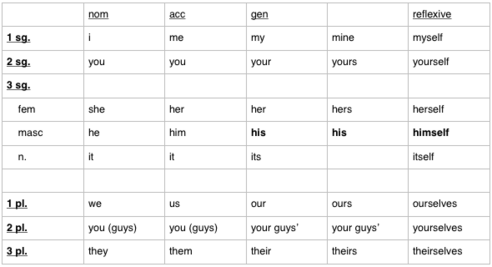 German is language that exhibits some inflectional case forms on nouns[9]. It also obligatorily displays case forms on its' determiners:

Case in terms of reflexivity is overt in English for every person (see the table for Pronominal Case Forms in English):

myself, yourself, himself, herself,yourselves, ourselves, themselves

The pattern for the reflexive form of the third person masculine pronoun does not follow the same pattern of reflexivity as the other pronouns in terms of case form marking for pronominal English.

In many languages, reflexivity is not overt for person. A prime example is apparent in French se. French se is used to express reflexivity for every expression of the third person, regardless of gender or person. It also functions as a middle, an inchoative, an applicative and an impersonal. For this reason, some theories suggest that reflexive phi-features for languages such as French posit in a level on the syntactic structure that is silent, between the determiner and the noun. This creates a new "silent" projection to a node specifically for φ-reflexives in French structure[10].

Phi-features can also be considered the silent features that determine whether a root word is a noun or a verb. This is called the noun-verb distinction of Distributed Morphology. The table below describes how category classes are organized by their Nominal or Verbal characteristics. Definitions for these four categories of predicates have been described as follows:

X-bar theory approaches categorical features in this way: when a head X selects its' complement to project to X', the XP that it projects to then is a combination of the head X and all of its' categorical features, those being either nominal, verbal, adjectival or prepositional features[12]. It has also been argued that adpositions (cover term for prepositions and postpositions[13]) are not part of the [+/-N] [+/-V] system as shown above. This is because they resist being part of a single class category, like nouns, verbs and adjectives do. This argument also posits that some appositions may behave as part of this type of categorization, but not all of them do.

There are three main hypotheses regarding the syntactic categories of words. The first one is the Strong Lexical hypothesis, which states that verbs and nouns are inherent in nature, and when a word such as "walk" in English can surface as either a noun or a verb, depending on the speaker's intuitions of what the meaning of the verb is[14]. This means that the root "walk" in English has two separate lexical entries[15]: 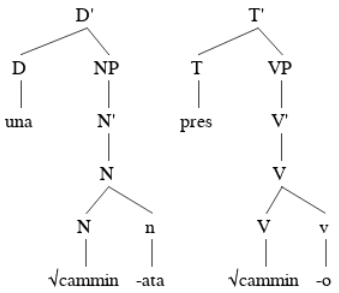 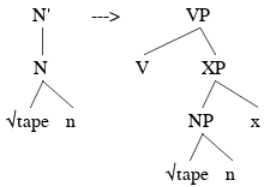 "The verbalizing head takes as its complement a structure that already contains a noun"[18].

This analysis states that the category is determined by syntax or context. A root word is inserted into the syntax as bare and the surrounding syntax determines if it will behave as a verb or a noun. Once the environment has determined its' category, morphological inflections also surface on the root according to the determined category. Typically, if the element before it is a determiner, the word will surface as a noun, and if the element before it is a tense element, the root word will surface as a verb[19]. The example in the photo shows an example from Italian. The root of the word is cammin- ("walk"). This word could surface as either a noun or verb. The first tree shows that when the element before is a D "una", the root will be an N and the following morphology will inflect -ata which is the correct full orthography for the noun "walk" in Italian. The tree on the right shows a similar process but in the environment where the root follows a tense element, and the morphology inflects -o as a suffix, which makes the verb surface not only as a verb, but as discussed before in person agreement, also shows that this is the first person present form of the verb ("I walk").

Syntactic decomposition for categorization of parts of speech includes an explanation for why some verbs and nouns have a predictable relationship to their nominal counterparts and why some don't. It says that the predictable forms are denominal and that the unpredictable forms are strictly root-derived[20]. The examples provided are of the English verbs hammer and tape. A verb such as hammer is a root-derived form, meaning that it can appear within an NP or within a VP. A denominalized verb, such as tape must first be converted from an NP because its' meaning relies on the semantics of the noun[21].

The discussion of how categorical features are determined is still up for debate and there have been numerous other theories trying to explain how words get their meanings and surface in a category. This is an issue within categorical distinction theories that has not yet come to a conclusion which is agreed upon in the linguistic community. This is interesting because phi-features in terms of person, number and gender are concrete features that have been observed numerous times in natural languages, and are consistent patterns that are rooted in rule-based grammar.