There are many factors that contribute to the decline of the male reproductive system. In particular, aging is associated with an increase production of reactive oxygen species (ROS) and a decrease in the antioxidant defense system, leading to oxidative stress, which can be harmful to male germ cells. Although sperm quality is thought to decrease with age, studies in humans have not found a definite negative correlation between aging and sperm quality. Further, advanced paternal age (APA), commonly defined as men over the age of 40 years, is associated with an increase in sperm DNA damage, male infertility and negative progeny outcomes. Although limited, studies have found that there may be benefits to antioxidant supplementation in order to reverse the effects of aging and oxidative stress in males. More studies need to be conducted.

The delay of parenthood is becoming more common due in part to societal pressure of focusing on one’s career, to the availability of effective methods of contraception, and to assisted reproduction technologies. In the United States, the proportion of men over the age of 40 fathering live births has steadily increased from 6.1% (1972–1975) to 12.7% (2011–2015) [1]. While it is well understood that women have a so-called “biological clock”, male reproduction in the context of aging has not been as extensively studied. Since men continuously produce sperm throughout their entire life, starting at the onset of puberty, this in part has instilled the notion that advanced paternal age (APA) is not a crucial factor to consider in the context of reproduction and fertility. Although it is well recognized that advanced maternal age is associated with a wide variety of reproductive complications, such as preterm births, still birth, and infant mortality [2], it is only in the last few years that a number of studies have shown that the impact of APA has important consequences on both fertility and on progeny outcome [3,4].

1. Effects of Aging and Oxidative Stress on Human Spermatozoa

Although there is no fixed age that is used to define APA, it is most commonly characterized as men over the age of 40 years [78]. Current studies focusing on APA involve looking at changes in sperm parameters, sperm DNA, fertility, and progeny outcome [79].

1.1. Effects of Aging on Sperm Quality

Assessment of the changes in sperm parameters (sperm concentration, motility, morphology, and ejaculate volume) is generally used for evaluating fertility in men [5,78]. Despite the latter, the idea that semen quality declines with age remains debatable [78]. Although it is likely that aging and oxidative stress negatively impact sperm quality and thus fertility, there still exists much controversy over whether the assessment of sperm parameters is useful as an indicator of reproductive success or failure [78].
When studies controlled for confounding variables (abstinence period, medical history, drug use), a negative relationship between semen volume and age was consistently noted [80,81,82,83,84]. Most studies looking at the changes in sperm morphology showed a general reduction of sperm with normal morphology with advancing age [78]. Nevertheless, some found no relationship between age and sperm morphology [78,85,86]. When considering sperm count and sperm concentration, multiple studies found a decrease in sperm concentration with age (although one study actually showed a 0.3–3.3% increase for each successive year of aging) or no relationship between paternal age and sperm concentration [87,88,89,90]. The challenge in obtaining conclusive data on sperm concentration may be due to the variation in semen volume that occurs with advanced paternal age [88]. Numerous studies have shown a decrease in sperm motility with advanced paternal age; Auger et al. demonstrated a decrease of 0.6% in motility per year of aging [80,81,82,83,84,87,91,92]. However, other studies conducted by Wang et al. and Irvine et al. found that a 0.06% increase in motility occurs with each year of aging [93,94]. Overall, the weight of evidence indicates that sperm motility decreases with age [78].

1.2. Effects of Aging and Oxidative Stress on Sperm DNA

As seen previously in animals, aged men also display higher levels of DNA damage, in part due to oxidative stress and the increased number of mitotic divisions during spermatogenesis that occur with age [78]. A study looking at 66 males between the ages of 20–57 years showed that sperm from men over the age of 35 had significantly more DNA breaks than younger men [95]. Furthermore, aging results in impaired sperm chromatin integrity and increased breaks in sperm DNA in infertile men compared to fertile men [96,97]. A study done by Wyrobek et al. investigating 97 men aged between 22–80 years found a significant positive relationship between aging and the percentage of sperm with DNA fragmentation and mutations in FGRF3, a gene associated with achondroplasia [98]. However, aging was not significantly associated with increases in immature sperm chromatin, mutations in FGFR2, an Apert syndrome gene, sperm diploidies, or aneuploidies [98]. Roughly 80% of DNA fragmentation observed in sperm is due to oxidative stress, which, in addition to aging, can arise as a result of frequent infections, obstruction, inflammation, and in some cases, male infertility [5,78]. Rolf et al. conducted a cross-sectional retrospective study demonstrating that infections of accessory sex glands increased with age in infertile men [99], underscoring the complexity of male reproductive aging as there exist many different factors that contribute to aging and oxidative stress.

1.3. Effects of Aging and Oxidative Stress on Fertility and Progeny Outcome

Although data focusing on the impact of APA on fertility are limited, the evidence suggests that the fertility rate decreases with paternal age [78]. An observational study done by Hassan and Killick demonstrated a five-fold increase in time to pregnancy in couples where the male partner was over the age of 45 years [100]. They also found that men over 45 years old were 4.6 times less likely to impregnate their female partners after one year of regular unprotected sex compared to younger men (<25 years old) [100]. In addition, men of APA were 12.5 more likely to be amongst the men who took over 2 years to attain pregnancy in their partners [100]. Based on these data, they concluded that maternal age did not contribute to the decrease in fertility, suggesting that the APA was the main factor [100]. Interestingly, Cocuzza et al. found that fertile men over the age of 40 years exhibited higher levels of ROS in their ejaculate [101]. They rationalize that because elevated ROS is involved in the etiology of male infertility, the chances of inducing pregnancy gradually decrease with increasing paternal age [101].
In addition to contributing to male infertility, oxidative stress paired with aging can present other reproductive risks due to the extensive amount of damage seen in aged sperm (Figure 2) [102,103]. APA has been associated with a higher risk of miscarriages, preterm births, late fetal death, and low birth weight [102]. According to the National Birth Defects Prevention Study, after controlling for confounders, APA was found to be linked to increased risk of birth defects in the offspring, such as cleft lip, diaphragmatic hernia, right ventricular outflow tract obstruction, and pulmonary stenosis with each year of aging [103]. In addition, the risk of diseases and genetic disorders including schizophrenia, autism, and bipolar disorder seems to also increase in the offspring of older men [5,104]. Other conditions linked to APA include achondroplasia, Apert syndrome, Klinefelter syndrome, and childhood cancers [5,103]. Thus, in couples where the man is older, genetic counseling should be recommended prior to conception in order to increase awareness of the risk associated with APA [103]. 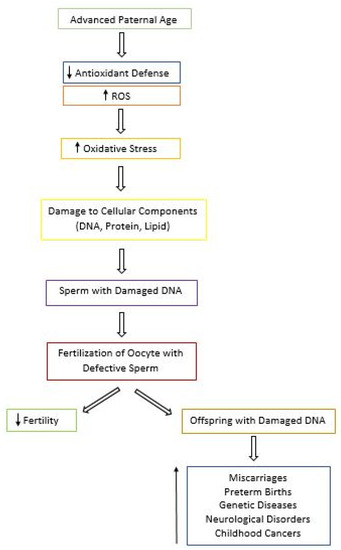 Figure 2. Flowchart of the Consequences of Advanced Paternal Age (APA). With APA, the antioxidant defense system decreases and levels of reactive oxygen species (ROS) increase, leading to oxidative stress and cellular damage. Defective sperm can cause a decrease in fertility. In addition, damage can be passed on to the offspring, resulting in a wide array of consequences for the future generation.

There are very few studies looking both at aging and oxidative stress in the context of male reproduction. In addition, many studies investigating the benefits of antioxidant supplementations have limitations. In a recent Cochrane review, it was noted that amongst the 48 randomized controlled trials on dietary oral antioxidant supplementation, most studies were poorly conducted, and therefore no clear conclusion could be drawn regarding the beneficial effects of antioxidants on live birth rates and clinical pregnancy in subfertile men [105]. These limitations include inadequate reporting of the study methods and the adverse effects, small sample size, and low number of trials [105]. In contrast, Greco et al. have described benefits of oral vitamin C and E supplementation in reducing DNA fragmentation in infertile men [106]. In a cross-sectional study by Schmid et al., it was demonstrated that aged men (>44 years) with the highest intake of vitamin C, vitamin E, or zinc had 20% less DNA damage in their sperm when compared to aged men with the lowest intake [107]. Interestingly, the levels of sperm DNA damage in older men taking the highest doses of antioxidants were comparable to those seen in younger men [107]. These data suggest that using dietary supplementation of antioxidant may have the potential to restore the damage seen in the DNA sperm of men of APA, thus possibly improving fertility and progeny outcome. However, another study conducted by Silver et al. did not find any improvements in sperm chromatin integrity with increased intake of vitamin C, vitamin E, or beta-carotene. This demonstrates the lack of consistency between studies investigating the effects of antioxidants on sperm and the need for more well-controlled studies [108].
Another antioxidant of interest is coenzyme Q10 (CoQ10), which is found in mitochondria at the midpiece of sperm [109]. Its reduced form, ubiquinol, is an antioxidant that protects sperm plasma membrane from lipid peroxidation [109]. In a prospective study, it was shown that treatment of CoQ10 increases sperm concentration, progressive and total sperm motility, antioxidant capacity, and SOD and CAT activity in men with idiopathic oligoasthenoteratozoospermia (OAT) [110]. At a higher dose, both semen parameters and antioxidant status were further increased, suggesting that CoQ10 may be beneficial in treating idiopathic OAT [110]. However, although a meta-analysis done by Lafuente et al. confirmed that CoQ10 improves sperm parameters, CoQ10 does not increase pregnancy rates in infertile men [111]. Moreover, we are not aware of any data in the literature indicating any improvement of live births in men using CoQ10 [111]. It is therefore necessary to conduct more robust and powered clinical trials in order to find better therapies for male infertility [111]. Table 1 summarizes the effects of antioxidant treatment in aging and infertile men (Table 1).
Table 1. Summary of the Effects of Antioxidant Treatment in Aging and Infertile Men.