Underutilized grain crops are an essential part of the food system that supports humankind, such as barley, buckwheat, broomcorn millet, foxtail millet, oat, and sorghum, which have characteristics such as containing more nutritional elements, being resistant to biotic and abiotic stresses, and having strong adaptability to poor environments.

Plants provide most of the food sources for humans around the world. With over 50,000 edible plants, just three of them—rice, maize, and wheat—supply 60% of the world’s food energy intake [1]. China has about 600 species of main cultivated plants [2], of which 43 are used as food crops [3]. Among 117.63 million hectares of food crops grown in China, 96.81 million hectares are occupied by rice (29.92 ha), wheat (23.57 ha), and corn (43.32 ha) [4], and only 20.82 million hectares are used by the other 40 food crops, all of which are considered to be underutilized food crops in China. There are six such crops: barley, buckwheat, broomcorn millet, foxtail millet, oat, and sorghum, all of which are types of cereals or pseudocereals (Figure 1). Grains from these crops are harvested for food and for other purposes; therefore, they are also called underutilized grain crops (UGCs). These six UGCs have a history of cultivation that spans 5000–8000 years and possess diversified landraces that have adapted to various ecological environments, particularly in the arid and cold mountainous areas in the north, northeast, northwest, and southwest regions of China (Figure 2). These crops have very important roles to play: (1) Adaptability to poor environments; (2) Source of healthy food; (3) Products of organic agriculture; (4) Source of income for the poor in remote areas; (5)  Complementary role in food security. 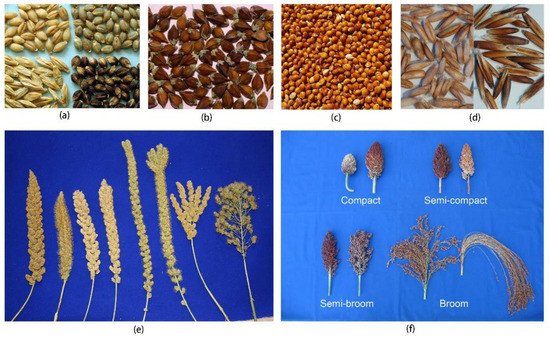 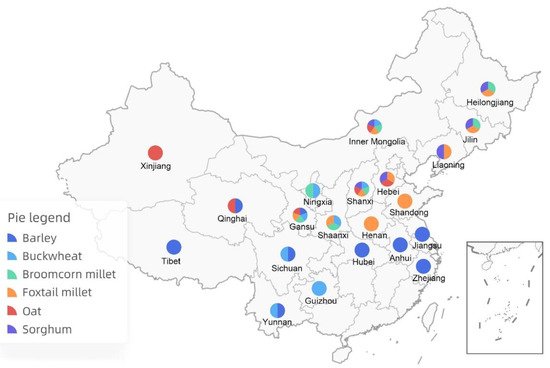 Barley (Hordeum vulagre L.) was domesticated in the Fertile Crescent in about 8000 B.C. [5]. The remains of barley grains from different archaeological sites in China show that barley was domesticated about 5000 years ago, indicating that the Qinghai–Tibet Plateau of China is one of the centers for domestication of hulless barley (qingke) [6,7]. There is a two-rowed subspecies (H. vulgare susbp. distichum L.) and a six-rowed subspecies (H. vulgare subsp. hexastichum L.). Barley is widely cultivated in China. In the northern part of the country, barley is sowed in spring as a single-season crop. In the Qinghai–Tibet Plateau, barley is grown on land above altitudes of 3000 m, with an obvious temperature difference between day and night and a short frost-free period, and the multi-rowed hulless barley (qingke) is dominant. In the south of the Yellow River and Huaihe River, barley is planted in autumn as a secondary crop [8]. The cultivated area of barley in China reached 6.5 million hectares in the 1970s. Currently, it remains at about 1 million hectares annually. The yield of barley has increased from 1522.5 kg/ha in the 1970s to 3990 kg/ha at present. Barley is a multi-purpose crop. Its grains are used for food, winemaking, and feed. Hulless barley (qingke) is a staple food for the Tibetan people. In other parts of the country, barley is usually cooked for porridge mixed with rice. China has a long history of making alcoholic drinks with barley, such as wine and beer. Specifically, barley contains more β-glucan (>5%), a dietary fiber that can help to promote human health.

Buckwheat (Fagopyrum spp.) is a pseudocereal that originated in the southwest of China [8,9]. There are two cultivated species, namely sweet buckwheat (F. esculentum Moench.) and Tartary buckwheat (F. tataricum (L.) Gaertn.). More than 20 wild species have been found in southwestern China [10]. Buckwheat is characterized by tolerance to poor soil and cool weather conditions. Its growth period is short, generally 60–90 days, at which point it reaches maturity. Buckwheat can be grown throughout the country. However, sweet buckwheat is mainly grown in northern China, including in Inner Mongolia, Gansu, Shanxi, Shaanxi, and Ningxia, while bitter buckwheat is mainly grown in southwestern China, including in Guizhou, Sichuan, Yunnan, Chongqing, and Hunan [8]. The annual planting area is 0.6–0.8 million hectares, and the total output is 0.5–0.6 million tons [11]. The yield of buckwheat is low, only about one ton per hectare. Buckwheat grain is rich in protein, vitamins, minerals, plant cellulose, and other nutrients, and specifically, bitter buckwheat contains flavonoids that are mainly composed of rutin, which has pharmacological effects for reducing blood fat and cholesterol and for preventing cardiovascular diseases [12]. Therefore, buckwheat is used for multiple purposes. The flour from the seed can be used to make a variety of foods, and the straw and leaves can be used as fodder and raw medical materials.

Broomcorn millet (Panicum miliaceum L.) originated in China. There is one cultivated species and one semi-wild-type species widely distributed throughout the country. The remains of broomcorn millet in ancient sites in Shaanxi, Shanxi, Gansu, Inner Mongolia, and other places can be traced back to about 8000 years ago, indicating that it is one of the earliest crops domesticated in China [13]. Broomcorn millet is mainly characterized by its early maturity and tolerance to drought and poor soil. It is mainly distributed in the northeast, northwest, southwest, and other arid areas in the northern part of China. In the 1950s, the sown area was 2 million hectares nationwide; since then, it has gradually decreased [8]. At present, the sown area in China is about 1 million hectares. Its yield ranges from 2250 kg/ha to 3000 kg/ha. Broomcorn millet is used for food as well as for winemaking. Its stalks and leaves can be used as forage for animals. Broomcorn millet can be made into a variety of snacks of different flavors. In the north, it is popular to use broomcorn millet to make a cake for Chinese New Year that is deeply loved by local people.

Foxtail millet (Setaria italica (L.) P. Beauv.) originated in China in the basin of the Yellow River and has a cultivation history of more than 7300 years [7]. Foxtail millet is mainly distributed in the north of the Yellow River and Huaihe River, including in the provinces/autonomous regions of Henan, Hebei, Shandong, Inner Mongolia, Northeast, Shaanxi, and Gansu. Foxtail millet is a typical environmentally friendly crop that is grown using the dry farming system in mountain areas. In the 1950s, the cultivated area of foxtail millet in China was as high as 15 million hectares, but later, it was gradually replaced by wheat, rice, and corn. At present, the annual planting area is about 1.2 million hectares [14]. The provinces or autonomous regions with the largest planting area are Hebei, Shanxi, Inner Mongolia, Shaanxi, Liaoning, Henan, Shandong, Heilongjiang, Gansu, and Jilin. The yield ranges from 4500 to 7500 kg/ha. Foxtail millet has the biological characteristics of resistance to drought and tolerance to poor environments [15]. It is rich in nutrients such as protein, fat, amino acids, and minerals that are present in much higher concentrations than in staple crops [8]. Millet is easily digested and absorbed by the human body no matter how it is cooked, so it is a good nourishing food for pregnant women, children, the elderly, and the weak. Foxtail millet straw is a high-quality forage for cattle due to its good palatability, rich nutrition, and easy digestion and absorption.

There are two hexaploid species of oat (Avena spp.) that are cultivated, namely A. sativa L., which originated in the Middle East, and A. nuda L., which originated in China [16]. One wild species (A. fatua L.) is widely distributed in China. Oat has been cultivated in China for more than 2000 years. It is mostly grown in northern regions, particularly in Inner Mongolia, Hebei, Shanxi, Gansu, Ningxia, and Xinjiang. In general, hulless oat is characterized by multiple florets compared to the single floret on hullness oat. Both hulless and hullness oats are strongly tolerant to poor soils. They are critical for the livelihoods of farmers in the dry areas in the northern and northwestern parts of the country. Annually, oat was grown on about 1.5 million hectares during the 1950s and 1960s. In the 1970s, the oat cultivation area decreased due to the adoption of high-yielding rice, wheat, and corn. Currently, the annual cultivation area is about 0.67 million hectares, with a total annual production of 0.6–0.8 million tons. The protein and fat contents in oat grain are about 15.0% and 8.5%, respectively. The contents of phosphorus, iron, and calcium in grain are higher than those of any other cereal crop. Specifically, oat contains more β-glucan and is considered as a healthy food for people suffering from high blood pressure, high blood fat levels, and diabetes.