Mature fruits of M. pruriens were harvested from Fort Hare University’s Research Farm located in Alice, South Africa. The collected seeds were pulverized in a standard process and taken to the laboratory for crude extraction and further treatments. Cytotoxic, antimalarial, and trypanocidal effects of crude extracts obtained from ethanol and water were tested, while the total phenolic, proanthocyanidin, and flavonoid contents of the aqueous extracts as well as their pharmacological activities were determined in vitro using 2,2-diphenyl-1-picrylhydrazyl ethanol (DPPH), ferric reducing antioxidant power (FRAP), and 2,2′-azino-bis(3-ethylbenzothiazoline-6-sulphonic acid) (ABTS) assays. Although the extracts showed mild antiparasitic (antiplasmodial and trypanocidal) effects, results from the cytotoxic experiment revealed that M. pruriens is not toxic to human cervix adenocarcinoma (HeLa) cells when tested using 50 µg/mL of extracts. It was observed that the seeds were remarkably rich in phenol (3730.1 ± 15.52 mg gallic acid equivalent (GAE)/g) compared to flavonoids (63.03 ± 1.95 mg quercetin equivalent (QE)/g) and proanthocyanidin (18.92 ± 1.09 mg catechin equivalent (CE)/g). Also, the antioxidant activities of the extracts were comparable to those of the standard antioxidant drugs (rutin and gallic acid) used, in a concentration-dependent manner. There was a direct relationship between phenolic acid content and antioxidant effects. It is therefore suggested that M. pruriens seeds be incorporated into human diets as a supplement to promote healthy living. Pharmaceutical industries with a particular interest in natural phenolic acids should consider using seeds of M. pruriens as pharmaceutical precursors. 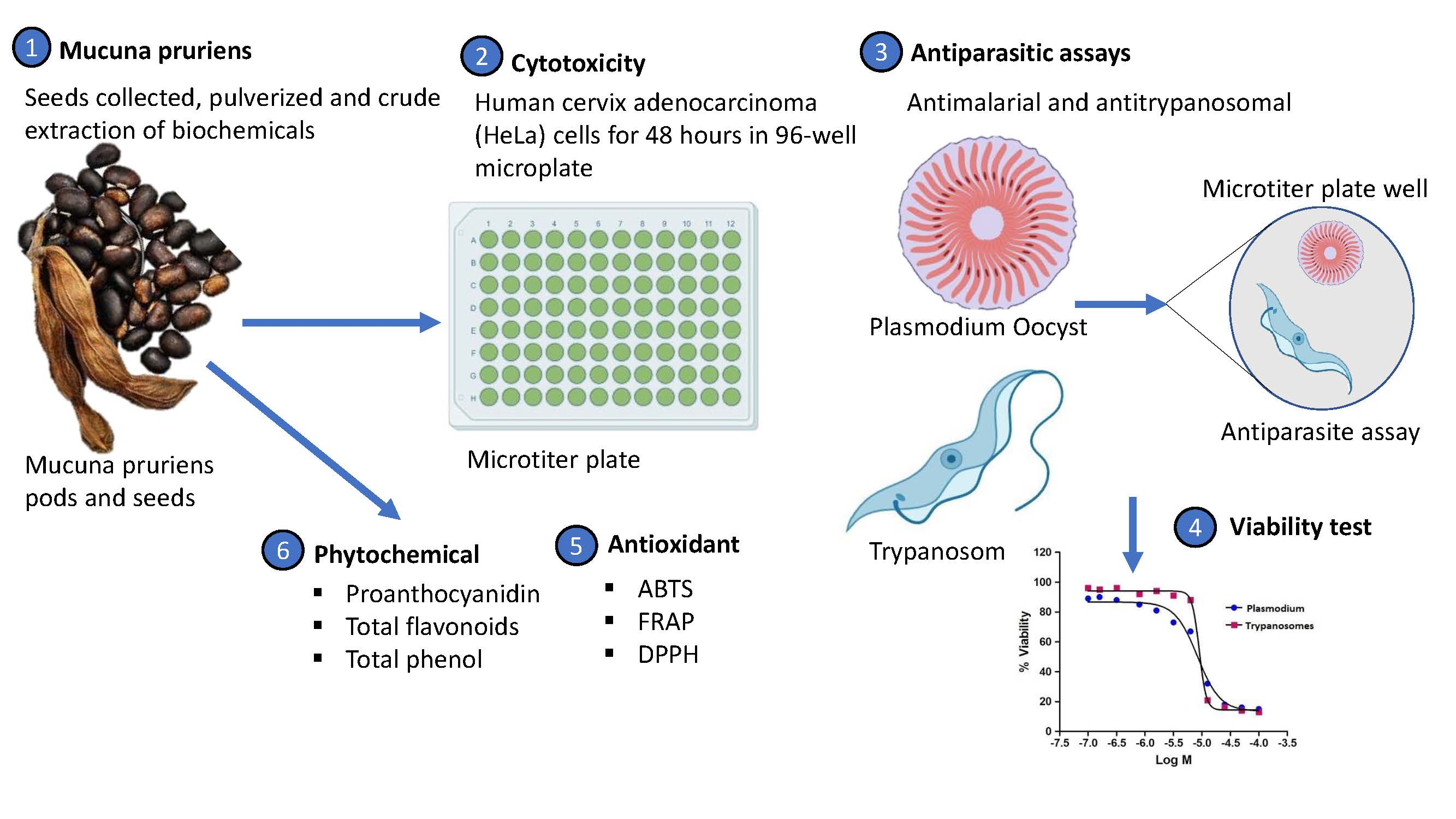 It exhibits allelopathy to weed growth and is efficient in reducing the nematode population in farms[1][8]. Several studies have shown that L-3,4-dihydroxyphenylalanine (L-DOPA), lectin, isoflavanones, and some alkaloids contained in M. pruriens seeds are responsible for the enormous bioactivity of its crude extracts[9][10]. Recently, several therapeutic approaches have been adopted to make healthy living affordable to all regardless of their status in the society, since synthetic products are not only expensive but also come with adverse effects[11][12]. The challenges posed by the cost and safety of synthetic drugs have raised the need to explore underutilized plant species reputed for high medicinal significance[12][13][14]. From previous reports, different parts of M. pruriens have proven to be good for diverse therapeutic purposes[5][6]. Despite the outcome of these novel researches, plants like M. pruriens with significant biological activities have not been adequately exploited for their therapeutic potential.

Besides multi-drug resistance to synthetic drugs found in some communities, which is a major setback in the fight against malaria and other chronic diseases, the long-term usage of synthetic drugs could be detrimental. Countering the predisposing factors to these phenomena is a major concern for pharmaceutical industries. Some of these drugs are not readily available, not affordable, or could be imbued with myriads of adverse effects upon usage[15][16], thereby causing an ethical and medical dilemma. It has therefore become expedient to explore the medicinal efficacy of some medicinal plants such as M. pruriens to downplay the dilemma created by synthetic drugs, decrease the possibility of drug resistance, increase drug efficiency, and provide affordable medicinal remedies[17].

To contribute to the increasing demand for plant-based products as natural remedies, this study seeks to assess the cytotoxic, antimalarial, and trypanocidal potency of M. pruriens used in folk medicine and then evaluate the phytochemicals and antioxidant activities of the plant. It is our informed opinion that the outcome of this research will assist pharmaceutical industries and households that may want to explore the plant as a food supplement or for medicinal purposes.

Plant bioactivity depends on its phytochemical richness, which in turn affects its antioxidant capacity[12]. These phytochemicals play overlapping roles in the attraction of pollinators, allelopathy, radiation absorption, singlet oxygen scavenging activity, plant defense, reduced oxidative activity, and the catalytic effect of transition metals (phytochelatins and metallothioneins)[18][19]. The polarity of solvents used for the extraction plays a crucial role in the biological activity of plants[20]. The solvents used for the extraction (water and ethanol) in this study are polar. Polar solvents are amphiprotic and can break covalent bonds by the acid–base reaction. This can facilitate the dissolution of the polar component of plant phytochemicals, such as amines, phenols, polysaccharides, ketones, and other compounds with oxygen, capable of forming hydrogen bonds[21]. Only water was used for phytochemical screening in this study, as extracts derived from the two solvents had no significant difference in cytotoxicity, trypanocidal, and antimalarial assays. The toxicity and potential adverse effects of synthetic drugs have created fear in the mind of the people. This concern is a major driver for the patronage of natural products [22][23]. The cytotoxic treatment of human cervix adenocarcinoma (HeLa) cells with crude extracts of M. pruriens seeds, however, showed that the seeds were not toxic at 50 µg/mL, therefore suggesting that M. pruriens seeds are safe for human consumption[1][7]. Also, the plant extracts at a fixed concentration of 25 µg/mL showed a mild activity against a culture of a P. falciparum strain. An increase in the concentration of the crude extracts could increase the toxicity of the extracts toward P. falciparum. This corroborates previous folk and pharmacological reports that M. pruriens is a natural antimalarial remedy[3][5][15].

In this study, the high survival of T. brucei cultures when mixed with the plant extracts compared to viability following treatment with pentamidine, a drug administered against trypanosomiasis, is an indication that the extracts were not toxic toward T. brucei. This may be related to the minimal toxicity exhibited by the extracts to human cells[24][25]. Furthermore, polyphenolic compounds are pharmacological precursors and have been reported to be responsible for antioxidant activities in plants[26]. When interacting with legume proteins, these polyphenolic compounds exhibit enhanced antioxidant effects, higher solubility, and better emulsifying capacity[27]. Thus, the elevated phenolic content recorded for M. pruriens in this study might be responsible for the antioxidant activities demonstrated. Although the ABTS and DPPH radical assays share a similar mechanism of action, both were excellent tools for assessing the capacity of the crude extracts to donate labile hydrogen atoms to inhibit oxidation[28][29]. Compared with rutin and gallic acid, the stronger radical scavenging capacities of M. pruriens, especially at the low concentrations used in this study, agrees with early reports that the plant exhibits dose-dependent scavenging ability of hydroxyl radicals[4][6]. Additionally, the FRAP assay indicated that M. pruriens has a good phytochelatin content.

The study revealed that the quantity of Fe (II) trapped by the aqueous extract was high and concentration-dependent, though slightly lower than the estimated quantity in the sample treated with the standard drug (rutin). At a concentration of 0.025 mg/mL of the plant and rutin samples, 3.71 and 4.58 mg/g of Fe (II) were, respectively, estimated while at 0.05 mg/mL, 8.68 and 9.84 mg/g were estimated, respectively. Also, 17.10 mg/g and 19.01 mg/g of Fe (II) were, respectively, estimated in 0.1 mg/mL of the crude extract and rutin. The output of this study further corroborates previous reports that elucidated the iron chelating capacity of M. pruriens[30].