It is well known that fruits, vegetables and some crustaceous seafood (e.g., lobster, shrimp) experience enzymatic browning when tissues are exposed to air. Enzymatic browning by polyphenoloxidase (PPO, EC 1.14.18.1) causes color and flavor degradation of foods [1,2,3,4,5]. Mechanical injuries to whole fruits/vegetables during postharvest handling and storage, and in processing whole fruits into juices, purees/smoothies, and cut products (e.g., cubes, slices, etc.) promotes the enzymatic reaction, with subsequent economic losses to the producers or manufacturers. The much appreciated fresh-cut minimally processed fruit and vegetable products are a class of foods also very susceptible to PPO browning [6]. The resulting o-quinone will subsequently polymerize with other o-quinone, protein or amino acids, producing undesirable brown compounds [7,8]. The activity of the enzyme can be reduced in the presence of antioxidants.

Pasteurization is primarily used to reduce pathogenic- and/or spoilage-vegetative-microorganisms in foods and beverages, increasing their safety and shelf life [10,11,12,13]. However, as endogenous enzymes can also spoil the food and be more resistant than microorganisms, they are also used as pasteurization targets [14,15]. The conventional thermal pasteurization and blanching operations in the range of 80 to 100 °C inactivate the PPO enzyme contained inside the fruit and vegetable products, according to a linear pattern of the natural logarithm of PPO residual activity vs. processing time [16] (Equation (1)). In Equation (1), A and A0 are enzyme activities after and before processing, respectively. A/A0 is the enzyme residual activity (RA) after processing for a specific time t (min), and kT is the first order inactivation rate at temperature T (min−1).
Higher inactivation rates (lower enzyme resistance) are registered for higher processing temperatures. The Arrhenius equation describes the temperature dependence of the PPO inactivation rates (Equation (2)):
where T is the temperature (K), Ea is the activation energy (kJ/mol), R is the universal gas constant (8.314 J/(mol·K)) and C is Arrhenius constant.

Power ultrasound (US) consists of sonic waves with frequencies higher than human ear audible sound (20–24 kHz). Power ultrasound or high-intensity ultrasound uses lower frequencies than medical applications, being characterized by sound intensity or acoustic intensity ranging between 10 to 1000 W/cm2 [17]. The sonication generates bubbles in liquid food as the wave energy propagates, a phenomenon known as acoustic cavitation. The formation and collapse of tiny bubbles can occur in few microseconds, and the cavitation increases with acoustic energy(power). The specific acoustic energy/power (W/g) or volumetric acoustic energy/power density (AED/AEP, in W/mL of processed liquid sample) quantify the energy requirements of the process for a given volume of treated food. Higher sound intensity/energy/power also increases the mechanical and sonochemical effects [15]. Ultrasound is known to break up proteins, starches and other large biopolymers such as enzymes, and can affect protein and enzyme functionality [18]. The damage to protein structure by ultrasound is desirable since it results in enzyme inactivation. Changes in enzyme biological activity are due to changes in the folding of the proteins, the secondary and tertiary structures of the enzyme. Under these extreme changes, hydrogen bonds and van der Waals bonding in the enzyme polypeptide chains can be broken down [19], resulting in the loss of enzyme activity [20]. The sonication processing conditions can cause partial or total inactivation of enzyme activity, depending on the type and the fruit/vegetable source of the enzyme. Thermosonication (TS) or heat-assisted ultrasound—the simultaneous application of US with heat—can be used to increase the efficiency of the process. The effect of ultrasound treatment on PPO depends on ultrasonic intensity (acoustic energy), duration of process (t), temperature (T), food/beverage matrix pH and ionic strength. The kinetics of PPO inactivation by thermosonication also follows a first order kinetics, similar to thermal inactivation alone.

High pressure processing (HPP) or high hydrostatic pressure (HHP) is a cold pasteurization technology by which vacuum packed food products are introduced to a vessel containing a pressure transmitting liquid (usually water), and submitted to a high level of isostatic pressure (300–600 MPa). The nutritional and sensory characteristics of the original fresh fruit/vegetables, thus are better retained [22]. Several studies demonstrated that room temperature HPP has limited effectiveness towards the inactivation of the PPO enzyme [5,23]. Therefore, the combination of HPP with mild heat (60–90 °C), also referred to as high pressure thermal processing (HPTP), heat-assisted HPP or HPP-thermal, has been investigated for more effective enzyme inactivation [24]. HPP typically breaks non-covalent bonds (e.g., hydrogen bonds within the enzymes), but does not break covalent bonds (e.g., peptide bonds within the enzymes) [25]. Generally, it is expected that higher enzyme inactivation or lower enzyme residual activity (RA) will result when higher T (temperature for HPTP), P (pressure) and longer processes (t, time) are used for processing. Non-linear inactivation using a first order biphasic model with two rates (kL and kS) was previously used to model PPO inactivation by HPTP (Sulaiman et al., 2015) [24] (Equation (3)). AL and AS are activities of the labile and stable fractions, respectively, and kL and kS are the inactivation rate constants of labile and stable fractions of the enzyme, respectively.
Other HPP-thermal studies carried out with lychee, sapodilla and Packham pear used the first order kinetic model (Equations (1) and (2)) [26]. 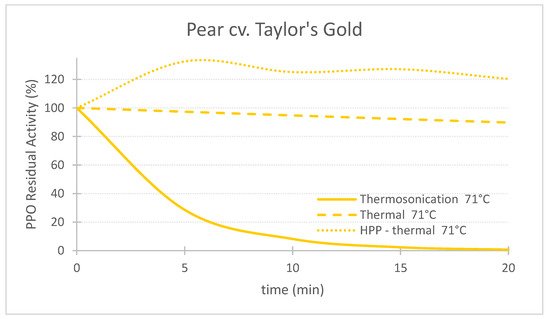 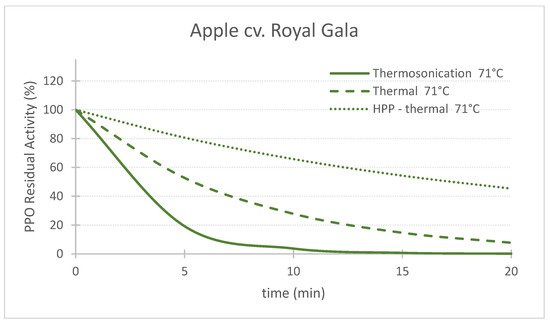 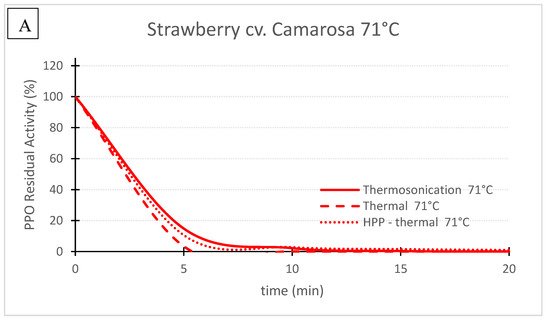 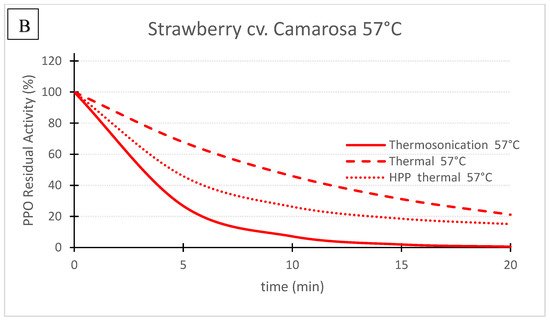 Figure 3. ‘Camarosa’ strawberry polyphenoloxidase residual activity after thermosonication (TS, 1.3 W/g), heat assisted high pressure processing (HPTP, 600 MPa) and thermal treatment alone at 71 °C (A) and 57 °C (B).
Table 1. First order enzyme inactivation rates for thermosonication (TS) and thermal inactivation, and first order biphasic enzyme inactivation rates for heat assisted high pressure processing (HPP-thermal) of Taylor’s pear, Royal Gala apple and Camarosa strawberry purees *.
* The first order rates (kT) at 71 °C and 57 °C were estimated using the original model Ea (Sulaiman et al., 2015) [16]; the first order biphasic rates for stable (kS) and labile (kL) fractions were taken from Sulaiman et al. (2015) [24].
Figures 1, 2 and 3 compare the effect of the three technologies on the PPO enzyme at 71 °C for pear, apple, and strawberry, respectively. Figure 3 also shows the effect of the three technologies on the PPO enzyme in strawberry at a lower treatment temperature of 57 °C. TS was the best technology for inactivating pear and apple PPO enzymes at 71 °C (Figure 1 and Figure 2), and strawberry PPO at 57 °C (Figure 3). Furthermore, thermal treatment alone was better than HPP-71°thermal for all the three fruits (Figure 1, Figure 2 and Figure 3). However, at a lower temperature (57 °C), HPP-thermal caused higher inactivation of strawberry PPO than thermal treatment alone (Figure 3B). The residual activity results obtained at 71 °C for strawberry puree demonstrated that at this temperature there is no added benefit of using HPP-thermal compared with exclusively thermal processing, contradicting the results obtained at 57 °C.
With respect to pear PPO (Figure 1), only TS was efficient for PPO inactivation, requiring 10, 15 and 20 min at 71 °C to reduce RA from 100% to 8.2%, 2.3% and 0.7%, respectively. On the contrary, the exclusive use of thermal processing at the same temperature barely had an effect on the PPO enzyme, still exhibiting 89.8% RA after 20 min. Furthermore, HPP-thermal activated the enzyme, expressed by a RA higher than 100%, for 20 min treatment, 120.3% RA activity was obtained, corresponding to 20.3% enzyme activation. Therefore, HPP is not recommended for preservation of this particular variety of pear.
Figure 2 and Figure 3 show that this activation effect was not registered in apple or strawberry enzymes, as the 3 technologies reduced PPO activity with processing time. The activation of enzymes HPP can occur [29] with HPP treatment, at room temperature in particular, as HPP treatment changes the conformation of the protein enzyme [5]. Enzyme activation by HPP was also observed for Bartlett pear slices at 400 MPa [30], Boskoop apple juice at 400 MPa [31], Amasaya apple juice at 450 MPa [32], sweet potato puree [33] and whole mushroom treated at 600 MPa [34]. Activation of PPO enzyme in Nashi pear and Royal Gala apple purees HPP treated at 600 MPa was also registered [24]. However, in the last study, when combining 600 MPa with a temperature of 62 °C, inactivation was registered for both fruit cultivars.
The comparison of RA of apple PPO after 10 min processing at 71 °C demonstrated the supremacy of TS over the other technologies, as RA were 3.7%, 27.8% and 65.8% for TS, thermal and HPP-thermal, respectively (Figure 2).
Figure 3 compares the inactivation of strawberry PPO at 57 and 71 °C by the 3 technologies. For 71 °C the kinetics of PPO inactivation and RA registered for the 3 technologies were very similar (Figure 3A). For example, after 10 min, 2.2%, 0.1% and 2.8% were obtained for TS, thermal and HPP-thermal treatments, respectively. At 57 °C all the inactivation rates were lower than at 71 °C, demonstrating the great effect of temperature alone or combined with other pasteurization technologies (Table 1), whereas at 57 °C, RA after 10 min were 7.1%, 26.1% and 45.9% for TS, HPP-thermal and thermal processing alone, respectively (Figure 3B). At 71 °C, residual activities below 3% were obtained for the same treatment time with similar inactivation history for the 3 pasteurization methods (Figure 3A).

The use of non-thermal technologies allows the reduction in treatment time or temperature, resulting in a food product of higher quality [35,36]. Among the three technologies investigated, TS was the best for inactivating endogenous PPO enzyme in fruits, followed by thermal processing. High pressure processing combined with heat at 71 °C was less efficient than TS and thermal treatment alone, and in the case of pear, undesirable enzyme activation was registered. Therefore, this technology might not be appropriate for certain foods containing PPO enzyme, as it can promote enzymatic browning. As expected, increases in the processing temperature subsequently increase the rates of enzyme inactivation for TS, thermal and HPP-thermal technologies. The resistance of the three fruits PPOs presents the same pattern, as pear PPO was the most resistant enzyme to the three technologies employed, followed by apple PPO and lastly strawberry PPO. This study demonstrated how variable the inactivation or resistance of PPOs from different fruit origins can be, including the fruit species, and within the same species, the fruit cultivar.