Tea and coffee are consumed worldwide and epidemiological and clinical studies have shown their health beneficial effects, including anti-cancer effects. Epigallocatechin gallate (EGCG) and chlorogenic acid (CGA) are the major components of green tea polyphenols and coffee polyphenols, respectively, and believed to be responsible for most of these effects. Although a large number of cell-based and animal experiments have provided convincing evidence to support the anti-cancer effects of green tea, coffee, EGCG, and CGA, human studies are still controversial and some studies have suggested even an increased risk for certain types of cancers such as esophageal and gynecological cancers with green tea consumption and bladder and lung cancers with coffee consumption.

Green tea is produced by processing of leaves of the plant Camellia sinensis (Theaceae) and is popularly consumed worldwide. Green tea has been shown to have beneficial effects on human health such as anti-cancer, anti-obesity, anti-diabetic, anti-cardiovascular, anti-infectious and anti-neurodegenerative effects [1][2]. (−)-Epigallocatechin gallate (EGCG) is the most abundant catechin in green tea and believed to be mostly responsible for these biological effects (Figure 1). A cup of green tea typically brewed from 2.5 g of tea leaves contains 240–320 mg of catechins, of which EGCG accounts for 60–65% [3].

Black tea is produced also from C. sinensis through enzymatic processing (so called fermentation) by intrinsic enzymes and microorganisms during which catechins can be polymerized to give catechin derivatives such as theaflavins and theasinensins [4]. Black tea has been shown to have physiological effects similar to those of green tea with lesser effects as compared with green tea due to its lower content of EGCG.

Coffee is also consumed worldwide and has various health effects. It contains about 2000 different chemicals and the major polyphenols are chlorogenic acid (CGA, Figure 1) and its derivatives which amount to about 3% w/w of roasted coffee powder [2][5]. A single cup of coffee may contain 20–675 mg of CGAs [6].

Several epidemiological studies have shown the anti-cancer effects of consumption of tea. A survey in 2013 conducted by Yang and Hong of prospective cohort and case-controlled studies which had been reported by 2008 revealed that green tea consumption showed risk-reduction in a total of 39 cases of breast, colon, esophagus, kidney/bladder, lung, ovary, pancreas, prostate, stomach cancers, whereas 46 cases showed no risk-reduction [1,7]. In the case of black tea, 28 and 92 cases showed risk-reduction and no risk-reduction, respectively, for these cancers[7]. These findings suggest that green and black teas have a preventive effect in some types of cancer.

EGCG is a prominent anti-oxidant and quenches reactive oxygen species (ROS), which facilitate oxidative DNA damage, mutagenesis, and tumor promotion, leading to anti-cancer effects[8]. EGCG can exhibit anti-oxidant activity through several mechanisms including catalytic metal chelation, hydrogen atom transfer, and electron transfer. Chemically, the anti-oxidant activity of EGCG can be interpreted by the existence of the polyhydroxyl structure and the gallate group which play key roles to scavenge free radicals and by the presence of phenolic groups with sensitivity to be oxidized, resulting in generation of a quinone [9][10]. 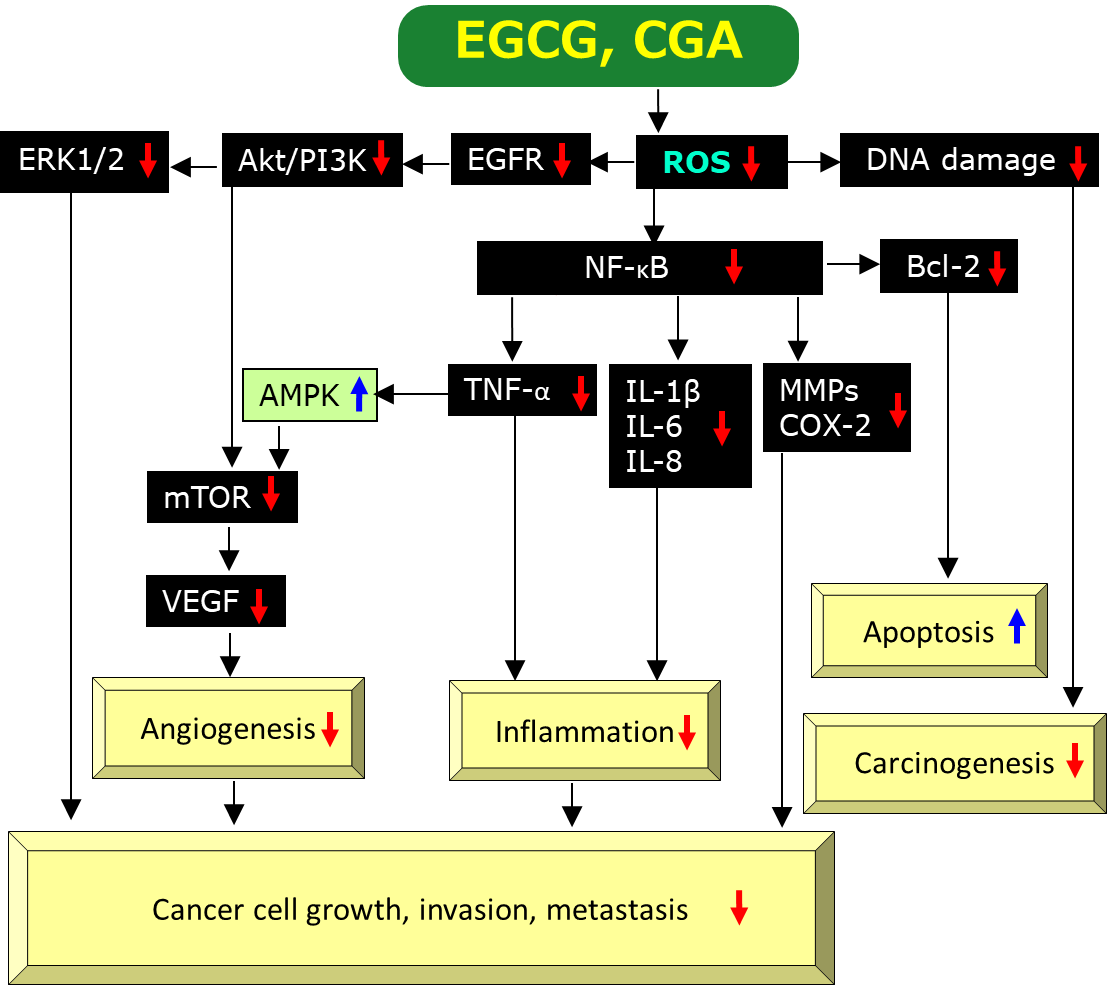 Chronic inflammation is thought to have an important role on the onset and progression of human cancer by modulating the tumor microenvironment[11]. A number of studies have provided evidence EGCG’s anti-inflammatory effects. These studies found that EGCG can inhibit activation of transcription factors such as nuclear factor-κB (NF-κB), activating protein-1, MyD88-dependent signaling pathway, Toll-interleukin-1 receptor domain-containing adaptor inducing interferon-β-dependent signaling pathways of Toll-like receptors, and expressions of inflammatory genes including cyclooxygenase (COX), nitric oxide synthase, and tumor necrosis factor-α (TNF-α) [12][13][14].

Angiogenesis is the process characterized by the development of new blood vessels from the pre-existing vessels, which supply a tumor with oxygen and nutrients to allow optimal growth. Anti-angiogenesis is thought to be one of the most promising methods of cancer treatment [15].

Cancer cells can adopt to the hypoxic microenvironment by expressing hypoxia-inducible factors-1 (HIF-1) and thereby increasing the levels of its downstream target vascular endothelial growth factor (VEGF), which promotes tumor growth, angiogenesis, and metastasis [16][17][18]. EGCG was shown to decrease the protein expression of HIF-1α and VEGF proteins in gastric cancer SGC7901 cells under hypoxia induced by cobalt chloride[18].

Induction of apoptosis or programmed cell death is one of the most important mechanisms for EGCG to exert anti-cancer effects. Several studies have provided evidence for the induction of apoptosis by EGCG and its mechanism of action. ROS can stimulate gene expression of B-cell lymphoma-2 (Bcl-2) via activation of NF-κB and therefore, EGCG’s scavenging activity of ROS is expected to downregulate the anti-apoptotic protein Bcl-2 (Figure 2), leading to apoptotic cell death of cancer cells (Figure 2).

A clinical trial with 10 participants found that consumption of 1L unfiltered coffee/day over 5 days resulted in a weak induction of glutathione-S-transferases (GSTs) and 3-fold increase in induction of placental type GST in blood, although other clinical markers for organ damage such as creatinine, aminotransferases, and alkaline phosphatase were not altered[19]. The finding suggests that coffee’s induction of placental type GST may lead to protection from chemical carcinogenesis.

In a controlled intervention trial with a cross-over design with 38 participants, consumption of 800 mL coffee daily over 5 days demonstrated the decrease by 12.3% in the extent of DNA-migration attributable to formation of oxidized purines, although other biochemical parameters such as the total anti-oxidant levels in plasma, glutathione concentrations in blood, and the activities of superoxide dismutase and glutathione peroxidase in lymphocytes were not markedly altered. The result indicates that coffee consumption prevents endogenous formation of oxidative DNA-damage in human [20].

Recent evidence has also suggested that coffee drinking may have health benefits on some types of cancer. A review by an International Agency for Research on Cancer working group conducted in 2016 on a large number of epidemiological and experimental studies on anti-cancer effects of coffee found an inverse association for liver and endometrial cancers [21].

In addition, a recent meta-analysis of observational studies on associations between coffee intake and 26 different cancers including 364,749 cancer cases provided evidence to show that coffee intake is inversely associated with endometrial cancer, liver cancer, melanoma, oral cancer, and oral/pharyngeal cancer [22]. Additional evidence was also obtained to suggest the reduced risk of cancers of the mouth, pharynx and larynx, and skin cancer. Coffee consumption may also be inversely associated with breast, colon, colorectal, esophageal and nonmelanoma skin cancers.

4. Comparison of Anti-Cancer Effects of Tea and Coffee in Simultaneous Human Studies

Table 1 shows a brief comparison of anti-cancer effects of tea and coffee in simultaneous studies reported since 2018 based on the Medline data base. Several investigations revealed that tea and coffee may have different effects in some cancer types. It is noticeable that coffee may increase a risk in certain types of cancer (bladder cancer, lung cancer, and childhood leukemia) in line with the finding from aforementioned studies which examined effects of either tea or coffee, individually[22].

The reason for the difference is not known at present. As pointed out by Milne et al. [23], the fact that both tea and coffee contain numerous different compounds, are prepared by various methods, and have differences in bioavailability makes it difficult to determine the factor(s) involved in the difference.

Table 1. Comparison of anticancer effects in humans between tea and coffee.