Azo-functionalized materials are one of the appealing groups of the functionalized materials owing to their photoswitching behaviour and have been explored for various potential applications viz., optical data storage, sensor, display devices, nonlinear materials and molecular switches. Recently, azo-functionalized bent-core liquid crystals (BCLCs) have gained significant attention because they have dual properties of BCLCs and azobenzene, which enables to generate new multifaceted functional and smart materials. In this report, the recently synthesized azobenzene containing bent-core mesogens and its subclass, the so-called hockey stick and V-shaped molecules are summarized. The mesomorphic behaviour of reported BCLCs affected by the type of central core unit, the nature, number and position of the lateral substituents and the type and length of the terminal chain are discussed. The photoisomerization process of these photoresponsive BCLCs in solid, solution and mesophase, as well as the impact of light on the chemical and electrical properties of them, are discussed.

The bent-core molecules or banana liquid crystals (LCs) have attracted significant attention in the field of soft matter science due to their remarkable and unique properties. They exhibit macroscopic polar order and chirality in their mesophases, although the constituent molecules of these mesophases are achiral [1,2]. Historically, the first bent-core molecules were synthesized and reported by Vorländer without any impact for over 60 years [3,4]. The theoretical and technological interest towards the ferroelectricity in mesophases leads to the rebirth in interest for bent-core mesogens. Until the 1990s, the ferroelectric property was only discovered in tilted smectic phases of chiral calamitic and discotic molecules [5,6,7,8,9,10]. However, the synthesis of chiral rod and dis-shape molecules with tilted smectic phases is relatively expensive. Therefore, a great deal of theoretical and experimental efforts was put into finding ferroelectric mesophases using achiral molecules [11,12,13,14,15,16,17,18,19,20,21,22,23]. In 1996, a novel type of mesogenic material breathed new life into the liquid crystal field and brought new expectations: the so-called bent-core liquid crystals (BCLCs) or banana liquid crystals [1]. BCLCs exhibit a wide variety of bent-core mesophases such as B1, B2, …, B8, bent-core nematics (BCN) and dark conglomerates (DC), in addition to the conventional nematic and smectic phases. A few previous studies have summarized the design and remarkable characteristics of BCLCs [6,24,25,26,27,28,29,30,31]. In general, eight different banana phases have been identified until today and are designated as B1–B8 phases based on the sequence of their discovery. Among the banana phases (B1–B8), the smectic B2 phase, now designated as the SmCP phase, is the most widely studied phase due to its ferroelectric switching behaviour that can be used in fast switching electro-optical devices [24,32]. Nowadays, the primary concern of many research groups is to create advanced materials using BCLCs where their properties can be adjusted by different external stimuli, in particular, the light [33].

Podruczna et al. mentioned that azobenzene derivatives were among the first recognized groups of liquid crystalline molecules [34,35]. The significant interest in using the azobenzene as a fundamental component for LC molecules is based on two reasons. Firstly, it is a photosensitive chromophore that undergoes trans-cis isomerization upon light exposure, causing the configurational modifications that bring significant changes in physical properties [36,37,38,39,40,41]. When an azobenzene-containing molecule is exposed to UV light with λ = 365 nm, the energetically more stable trans configuration will change into the cis configuration and reverse back to the original configuration upon the illumination with visible light (within the range 400–500 nm) [42]. Cis-trans isomerization can also occur by keeping the excited trans isomers in the dark place. This spontaneous process is called thermal back relaxation, where the metastable cis isomers revert back to the thermodynamically more stable trans form [43]. This particular aspect of photonics, in which molecular configuration can be manipulated by light, is crucial especially in the research fields such as holographic media [44,45], photoalignment of LC system [46], optical storage [47,48,49] and photochemical molecular switches [45,50]. In the case of optical data storage devices, one of the most requirement for azobenzene to be utilized is long thermal back relaxation [51]. Secondly, molecules based on azobenzene have delocalized electronic charge distribution between acceptor and donor atom or group of atoms substituted with it. This feature may be used to design materials with good nonlinear optical (NLO) properties. In particular, for optical second-harmonic generation (SHG), the azobenzene moiety seems to be a good candidate to be incorporated in bent-core LCs [52].

In recent years, azo functionalized bent-core liquid crystals received great attention because they combine the photoswitching behaviour of azobenzene and liquid crystalline properties of BCLCs, creating potential new multi-functional and smart materials [53]. For this reason, azobenzene-containing BCLCs draw the attention of many researchers in the past few years. Many different azo functionalized BCLCs have been synthesized to understand their rich mesomorphism and multifaceted properties [52,54,55,56,57,58,59,60,61,62]. 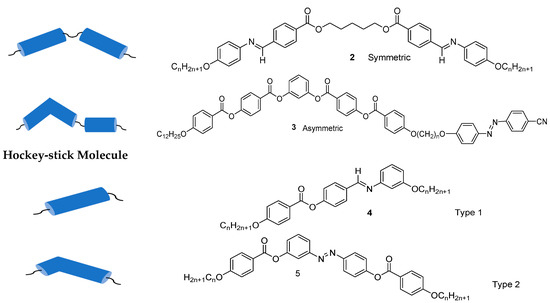 As mention earlier, BCLCs bearing with azo moiety exhibit remarkable properties because they possess the photochromic properties of azobenzene and the unusual physical properties of bent-core mesogens [57,70]. Alaasar [57] pointed out that it is crucial to note that Vorländer, the pioneering scientist in the field of LCs, had prepared the first azo-containing BCLC derived from the isophthalic acid as the bent-core unit (compound 6) in 1929 [3] although Prasad et al. initiated the research on BCLCs incorporating with azobenzene groups [36,71,72]. In 1932, Vorländer et al. reported another bent-core mesogen that consists of resorcinol as the central core unit and azoxy as the linker (compound 7) (see Figure 2) [4]. This mesogen exhibited an unidentified smectic phase which was later known as the B6 phase after the further investigation conducted by Pelzl et al. [57,73].

Incorporation of photoswitches, molecules that undergo structural changes in response to light illumination, in the liquid crystal network has emerged a promising and exciting class of materials for achieving optical to mechanical energy conversion [62,161,162,163,164]. The azobenzene represents a classic example of photoswitchable material that finds tremendous applications in different fields, especially in the photonics, as it is mentioned in the introduction section. Therefore, most of the photoswitchable LC materials incorporate the azobenzene in their molecular structure substantially responsible for exhibiting photoresponsive behaviour. The azobenzene undergoes a reversible trans-cis photoisomerization under the appropriate UV-light illumination, as shown in Figure 3. This phenomenon will later bring about a geometrical change at the molecular level that disrupt liquid crystallinity and effectively promote disorder, causing a significant change in the physical property of azobenzene based materials [62]. As mentioned earlier, the cis-trans isomerization can occur in two ways, either by removing the source of irradiation or keeping the excited trans isomers in the dark condition, which is known as thermal back relaxation. The relative thermal stability of the two isomers can differ significantly among the different system. The cis/Z isomer of some compounds can alter quickly into their trans/E isomers, while the cis/Z isomer can have appreciable thermal stability in other systems. The longer thermal back relaxation (higher thermal stability) is very crucial when considering applications in technologies such as optical data and real-time information transfer [165]. Photoisomerization (trans → cis) and thermal isomerization (cis → trans) of the azobenzene are well-separated in time because the former process takes place considerably faster than the latter one. The photoisomerization behaviour of certain compounds that are mentioned in the previous sections will be discussed in this section.

Figure 3. Photoisomerization process of azobenzene under light irradiation or in dark condition.

As the discovery of cis-trans photoisomerization, azobenzene functionalized BCLCs have been exploited extensively for potential applications in enantioselective syntheses, photonics and nonlinear optics (NLO). However, numerous scientific issues concerning these photoresponsive BCLCs still need to be examined. One of the crucial aspects that still represent a difficulty in the use of these photosensitive BCLCs concerns bulk phase alignment. It is challenging to obtain a proper alignment in the case of BCLCs since the procedures that generally used for the calamitic LCs are not applicable in the BCLC system [27,57]. It is vital to obtain a breakthrough in this aspect because the proper sample alignment is a target not only for applications but also for basic research purpose. In developing new applications based on the photosensitive BCLCs with a wide range of chiral or polar stabilized mesophases at room temperature, the mesomorphic behaviour of bent-core mesogens should be maintained at room temperature or as close to room temperature as possible. Third, it is difficult to predict an ideal criterion to design the biaxial nematic phase (Nb), a potential candidate for the application in the next generation of ultrafast and wide-angle display devices due to the fast switching response, compared to the uniaxial nematic phase. The nature of the reported Nb in azobenzene containing BCLCs still open the question to be answered. Fouth, although there is a massive amount of reported BCLCs, the requirement for more BCLCs with enhanced NLO properties is still high because they might yield a broad range of applications [57]. Despite the promising effects and possible applications are given by the reported azobenzene based BCLCs, most of them are only used for basic and theoretical research as the problems mentioned earlier limit the practical applications. Therefore, further explorations on the possible practical applications of BCLCs should be intensified in the future.

A review of the recently designed photoresponsive azobenzene based BCLCs exhibiting numerous types of mesophases including bent-core nematics with cybotactic clusters (NcybC and NcybA), polar and non-polar Sm phases and chiral sponge and HNC phases (DC1* and DC2*) as well as the conventional nematic and smectic phases has been provided. It was concluded that the mesogenic properties of BCLCs could be altered by minor structural change, for instance, type of BU unit, the overall length of the molecular structure, types and orientation of linking groups and the lateral substitution on BU or sidearms in addition to types and length of terminal chains. The substitution of the BU unit, especially in position 4, has been proved to be beneficial in producing the new mesophases, such as the SmCaPAR phase generated from the 4-cyanoresorcinol. Although BCLCs are presently at the interesting research stage, the field looks sufficiently mature that more ambitious projects can be proposed for these materials owing to their remarkable and unique properties. They can certainly be put forward as novel tools to be used in developing new, smart and often with multifunctional for electronic, magnetic and photonic devices. Therefore, further investigations should be undertaken to achieve practical applications based on BCLCs in the future. Hopefully, the different examples of discussed BCLCs in this paper can provide insights to researchers to conduct their own studies.