After the identification of a biological target (enzyme, receptor, protein, etc.), the focus of the early phase of drug discovery rests on the identification of leads or compounds that exhibit pharmacological activity against this specific target. Compounds of interest are most often discovered in pre-existing libraries of compounds that can be either virtual or physical. Computer-aided methods which have become increasingly important over the years in drug development utilize virtual compound libraries. While physical compound libraries reach the number of millions of molecules, virtual compound libraries created by large pharmaceutical companies can range from 107 to 1018 molecules. Investigations of these libraries identifies specific molecules, synthetic pathways and focus the research toward a specific chemical space. Targeted libraries are often smaller and are focused towards a specific chemical space. They are created by using relevant biological information with the aim to decrease the processing time associated with larger libraries while maintaining the most relevant chemical space where lead compounds can be found. Due to the fact that they required less computational or wet-lab labor to process they have become very popular with smaller laboratories which try to compete in the drug-development sector. Many modern vendors of compounds today offer such libraries, but the quality of the procedure used to define desired chemical space and select compounds is questionable.

The role of targeted libraries

As seen in (Figure1) the compound library plays a crucial role in the process from target identification to drug candidate. the CADD methodology is nowadays routinely used in drug discovery, the need for virtual compound libraries increases. Consequently, numerous commercial vendors have emerged, offering such libraries in both physical and virtual forms. To further facilitate the drug discovery, commercial vendors are now offering scientists the so-called targeted or focused compound libraries ready to jumpstart the drug design and discovery in a specific field. These focused libraries often represent a subset of compounds from the manufacturer’s full database that may possess specific properties for a selected target or drug design field[1]. 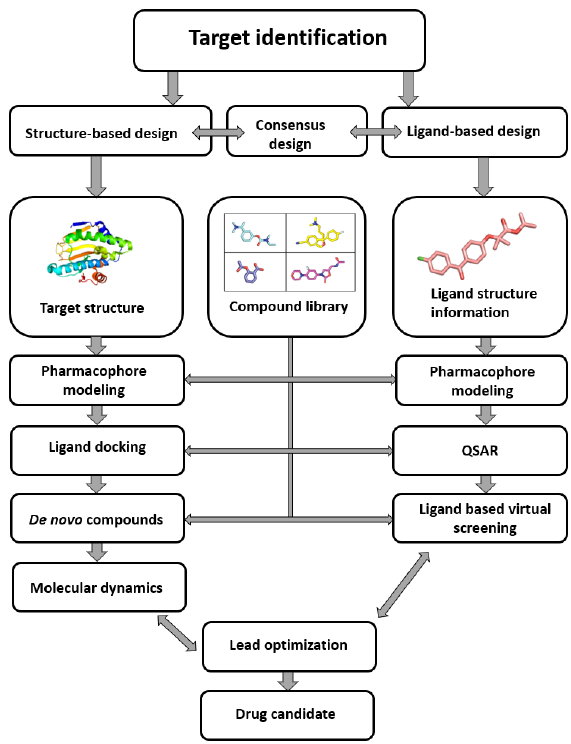 The main goal of targeted libraries is to cover a diverse chemical space with as few compounds as possible. Due to the fast-growing availability of the chemical and biological structural data, the public bioactivity databases provide an excellent starting point [3]. The most comprehensive and curated information about molecules is freely available in the prominent PubChem, ChEMBL and ZINC databases. After assembling the initial database from various sources, the next step is to remove duplicates, so that only unique structures are processed further[3]. The choice of the chemical file format is vital, as it dictates how the obtained data can be used. The most recommended file formats for representing molecules as strings include the SMILES and InChI formats. In most cases, multiple SMILES strings can equally well represent a single molecule. The application of the canonical SMILES, which uses only a single string per molecule, is recommended to avoid duplication and filtering problems. For the spatial representation of molecules, either the Structure Data Format (SDF) or the MDL Molfile (MOL) format are the most common [4]. Online libraries can usually be downloaded in these formats, making it easier to obtain a coherent library. When performing filtering, clustering or similarity searches, the SMILES format is preferred, as it leads to faster processing, due to its string representation; however, the spatial information is required for downstream methods such as 3D pharmacophore development, molecular docking and molecular dynamics. The molecular representation always requires the extra care and exploration in terms of conformational viability, chiral centers, tautomerism, compound ionization, presence of salts, structural faults, etc. By default, the hydrogen atoms are often not present in various chemical file formats and should be added during the library preparation. Tautomerism represents a property of chemical compounds that affects the calculation of their physiochemical properties, such as logP, logD and pKa, and subsequently bears consequences in both QSAR and molecular docking [5]. Due to their different structural representations, tautomers are often handled as separate molecules by CADD programs [3][6]. Moreover, since proteins are known to be enantioselective toward the binding ligands, exploring chirality when designing a virtual library is an important aspect to consider. In the majority of virtual libraries, however, compounds are represented by a single stereoisomer, or the stereo information is absent altogether. Exploring chirality thoroughly will expand the database size by 2n per molecule, where n is the number of chiral centers present. With larger databases, this issue will be even more pronounced and should be considered before generating all possible stereoisomers [7]. In general, it is recommended to explore unspecified chirality, which should be performed on a case-by-case basis with regard to the biological context [3]. Furthermore, for compounds that have ionizable groups, multiple different structural representations should be used. Within a reasonable pH range, structures should be represented as protonated and deprotonated forms of compounds [7]. The biological context of the target protein should be used to provide an accurate representation of the environment. After the final compound 3D structure generation, energy minimization should be carried out in order to optimize the molecular geometry [8]. Library design should factor in the avoidance of toxic outcomes. Despite the fact that toxicity of drugs is multifactorial and that predicting the exact property responsible for toxicity is difficult, several correlations of toxicity to in vitro pharmacology profiles exist and can be translated to in silico tools which examine molecular descriptors and filter the libraries accordingly [9]. The filtering itself can also flag compounds with reactive functional groups or moieties, optically interfering components, aggregators or frequent hitters. The filtering of “unwanted” molecular species using computational filters represents an essential element of library preparation which should always be considered in a suitable context [10][11]. The general guide for virtual compound library preparation is presented in (Figure 2). 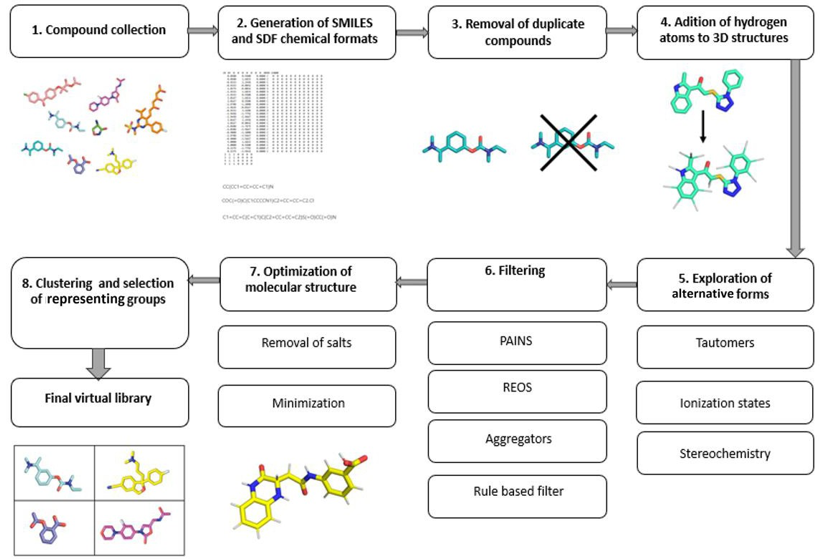 Figure 2. Workflow of an efficient library preparation for medicinal chemistry. 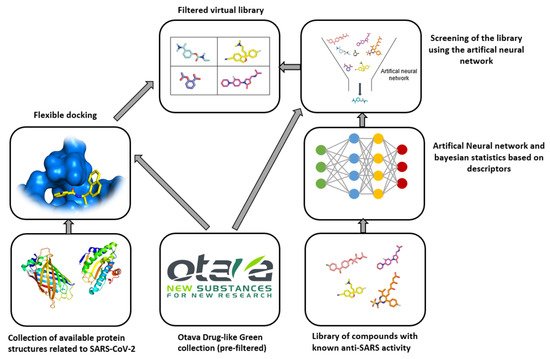 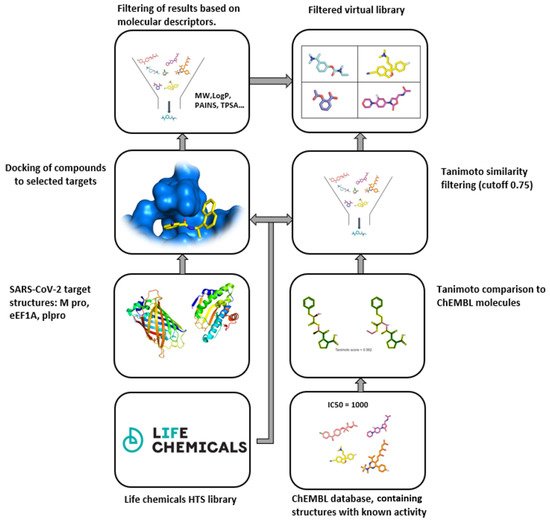 The main problem with the libraries discussed, in our opinion, is that vendors lack the information on library design, as well as the references to the primary literature. Commercial vendors consistently provide only general information about the screening protocols used to design the target libraries offered and are even less informative about the actual filters used. No ref- erences to actual actives are provided when using ligand-based design, with the exception of marketed libraries of known actives that can be referenced post-purchase by the client through databases such as ChEMBL. For structure-based approaches, usually only target or protein classes or a general panel of targets are provided, with reference to methods such as molecular docking. No precise docked receptors or PDB IDs of the targets are available, and no docking protocols or even references to the molecular docking software (or other HTVS software) are provided. This fact is that worrying does not bode well for the use of these libraries in drug design and lends itself to commercial drug companies to focus on and improve. In our more than 10 years of experience, we have found that the quality of the compounds purchased from commercial suppliers is usually high, with most compounds being characterized by NMR and MS/HRMS analyses after purchase, and their purity being determined to be about 95% or higher by HPLC. However, analytical data are not part of the original catalogue selection, and purity data are not usually available prior to the purchase. Therefore, we recommend that the reader be aware of this fact and even take advantage of asking the commercial vendor for characterization and purity data prior to the purchase (in some cases, NMR, MS and HPLC data can be obtained). Nowadays, vendors can even point out certain availability and quality issues. From the time of purchase, the quality of the supply chain (cold storage, if necessary, and insurance for possible shipping problems) and the emphasis on quality storage after delivery are essential[12].