In primary total hip arthroplasty (THA), dual-modular stems were introduced to better restore hip stability, femoral offset, and leg length. This entry highlights the gathered knowledge about dual-modular stems and related complications in combinations with titanium (Ti) and cobalt-chrome (CoCr) exchangeable necks. The reasons for a modular neck failure are multifactorial. Some of the dual-modular stems are still on the market despite the fact th these designs have neither been proven for durability nor have shown any clinical benefits for the patients as compared to monolithic stems. Apart from very limited indications, orthopaedic surgeons should not use dual-modular stem designs for primary THA.

To treat patients with advanced hip osteoarthrosis (OA), “monoblock” femoral stems were traditionally used for total hip arthroplasty (THA). These femoral stems were made of stainless steel or cobalt-chrome (CoCr) alloys allowing for the polishment of the head and were inserted with polymethyl methacrylate (PMMA) or bone cement. As the PMMA was accused off periprosthetic bone resorption and implant loosening, erroneously named “cement disease”, uncemented stems of Titanium-alloys became more and more attractive. Since Ti-alloys could not be polished smoothly enough to prevent the forming of a large amount of polyethylene debris now known as the main reason for bone resorption (“polyethylene disease”); moreover, because they provided orthopaedic surgeons with better possibility to adopt leg length and femoral offset more easily, modular stems with the head as a separate piece started to appear on the market. The head was attached to the neck of the stem intraoperatively by the head-stem Morse taper. Soon, all commercially available THA systems were updated with separate modular heads, presenting with different bore lengths, diameters, and material properties. Nowadays, these “single-modular stems” present such a standard in primary THA that they are commonly referred to as the monoblock stems by the orthopaedic community to differentiate them to the later introduced dual-modular or bi-modular stems. In this manuscript, the term monoblock will be used for the standard modern femoral stem with proximal male part cylindrical Morse taper to fit a separate head.
Driven by successful utilization in revision arthroplasty, implants with dual-modular stems with an exchangeable neck emerged 30 years ago, enabling the surgeon to restore natural biomechanics of the hip joint even more closely. The exchangeable neck and femoral part of the stem are coupled together by an additional Morse taper joint, the neck-stem taper. Different neck length and orientation allow the orthopaedic surgeon to better optimise the leg length, to re-establish the joint centre of rotation, and provide better hip stability [1]. Achieving correct biomechanical conditions can theoretically slow the progress of THA components wear thus reducing particle generation now known to promote bone resorption, ultimately leading to implant loosening necessitating revision [2]. Besides, revisions of only acetabular components were supposed to be easier with modular stem implants due to an added option of temporarily removing just the exchangeable neck and thus granting the surgeon unobstructed access to the acetabulum [2]. However, adding another junction to the system has later shown to create additional problems of metal-alloy coupling in the unfriendly environment of biological fluids that was earlier known only in marine engineering. Due to crevice corrosion, it was usually impossible to disconnect the exchangeable neck from the dual-modular stem during acetabular revision surgeries.
The GSP hip system (Cremascoli S.p.A., Milan, Italy) included one of the first commercially available stems with dual modularity intended for primary THA. Both the modular neck and the body of the stem were made of a Ti-alloy (Ti6Al4V). At the proximal end, the modular neck had a 12/14 cylindrical taper for the junction with the head. At the distal end, the modular neck had a patented 9 × 12 mm rectangular taper for the junction with the femoral stem. The stem-neck junction was extensively studied in the laboratory before the system was released and no mechanically related problems were detected [3]. The company had slightly changed the stem design after a few years, and the new system was named An.C.A. Fit. Short- and medium-term clinical results with the system were promising and persistent even in the long-term [4,5]. Later, the producer was bought by an American company (Wright Medical Technology Inc, now MicroPort Orthopaedics Inc., Arlington, TN, USA) and the design of the stem was further changed to the Profemur series, which was basically an uncemented, rectangular, grit-blasted dual-modular stem made of Ti6Al4V alloy. Despite the evolution of stem design, the design of the stem-neck junction has remained the same. Profemur hip systems were sold around the globe (Figure 1). 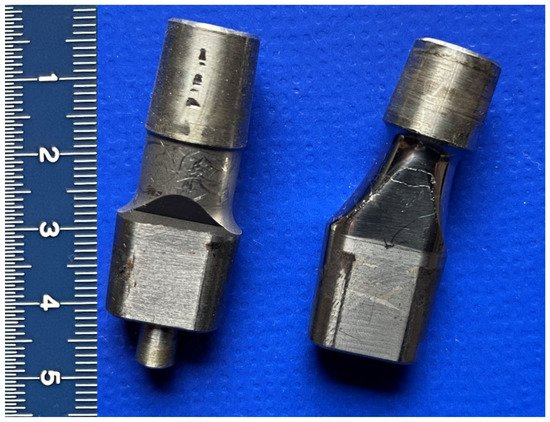 Figure 1. The exchangeable neck of the GSP (Cremascoli S.p.A.) (left) and Profemur Z (Wright Medical Technology Inc.) (right) dual-modular systems. Both necks are short, the GSP-neck is straight, and the Profemur Z-neck is in an 8° varus orientation. Note the same dimensions of the rectangular-shaped cross section with rounded filets of the distal Morse taper [6].
While the popularity of dual-modular system grew [7], the first reports of unexpected complications of using them for primary THA started to appear [8,9]. The producer replaced Ti-alloy necks with CoCr necks due to higher modulus of elasticity of CoCr-alloy, thus lessening the extent of micromotions [10]. However, this manoeuvre did not solve the problem of modular neck failures. In 2015, the manufacturer (MicroPort Orthopaedics) recalled long CoCr necks of the Profemur series from the market.
Two dual-modular systems (ABG II and Rejuvenate, both from Stryker, Mahwah, NJ, USA) got recalled from the market for their increasing rates of reported complications [2,11]. After some dual modular systems were recalled, orthopaedic surgeons’ enthusiasm withered [12]. Between 2017 and 2019, a 50% drop in the usage of modular stems was recorded by German Arthroplasty Register in the annual report of 2020 [13].