The purpose of our study was to examine the prevalence of inherited and acquired thrombophilia in cirrhotic non-malignant portal vein thrombosis (PVT) at our center. As secondary aims we explored the influence of these disorders on the clinical presentation of PVT and response to anticoagulation.

Non-malignant portal vein thrombosis (PVT) is defined as a thrombus that develops within the portal vein trunk and intrahepatic portal branches, which may also involve the splenic (SV) or superior mesenteric veins (SMV). In the absence of recanalization, the portal venous lumen is obliterated and portoportal collaterals develop resulting in portal cavernoma. Although the latter transformation can develop very early after acute PVT, it is generally used to define the chronic stage of PVT [1]. It constitutes the most common thrombotic event in patients with cirrhosis, with increased rates in the setting of advanced liver disease. The reported prevalence of PVT varies with different diagnostic methods and target populations, ranging between approximately 10–25% in patients with decompensated cirrhosis and 1–5% in those with compensated cirrhosis [2]. Despite being a well-known complication of liver cirrhosis, the contribution of PVT to hepatic decompensation and overall mortality is still a matter of debate [1,3–5]. Discrepancies among studies regarding patient selection criteria (compensated vs. decompensated), degree and extent of thrombosis (occlusive vs. nonocclusive), treatment strategies (anticoagulation vs. no anticoagulation), sample size and time of follow-up have led to conflicting data [6]. There is consequently no consensus on its optimal management and no definitive recommendations have been reported in clinical guidelines or consensus conferences [1,4,5,7,8].

The mechanisms involved in the development of PVT in patients with cirrhosis are also not yet fully understood. Of the three pathophysiologic factors predisposing to thrombosis described in the triad of Virchow (i.e. slow blood flow, endothelial damage and hypercoagulability), portal flow seems to be the most influential in the setting of cirrhosis [4]. The efficacy of transjugular intrahepatic portosystemic shunt (TIPS) in restoring PVT patency by presumably increasing portal flow [1] and the identification of a reduced portal flow as a major risk factor for PVT development support this notion [9,10]. Other potential mechanisms involved include a state of hypercoagulability in more advanced disease, bacterial translocation and inflammation, and vascular injury to the portal venous system secondary to several procedures (e.g. splenectomy) [3].

Inherited and acquired prothrombotic disorders may also play a role, although current data are conflicting. The limited number of studies available are mostly case-control studies with small sample sizes. Their study design, target population (diverse ethnicities and geographical locations), diagnostic criteria for PVT, and assessment of thrombophilic conditions vary widely, and contribute to the inconsistent results [11-33]. Moreover, none of these studies have properly evaluated whether the presence of thrombophilia impact the progression rate or response to treatment. Among the different thrombophilic genetic defects, Factor V Leiden (FVL) and prothrombin G20210A (PTHR) mutations have been the most frequently studied. Three meta-analysis concluded that they increased the risk of PVT in patients with cirrhosis [34-36], although in one of them this association was not shown for PTHR [35] and all of them are biased by the quality of the studies included. Inherited protein C, protein S or antithrombin III deficiencies are difficult to detect due to co-existent liver synthetic dysfunction [4]. Their levels, however, do not seem to be associated with PVT development [37]. The methylene tetrahydrofolate reductase C677T and plasminogen activator inhibitor– type 1 4G-4G mutations have also been described as independent predictors of PVT [18], although these polymorphisms have not been conclusively associated with increased thrombotic risk [38]. The role of acquired prothrombotic disorders has been less evaluated in patients with liver cirrhosis and PVT. In contrast to non-cirrhotic PVT, the relevance of  myeloproliferative disorders and antiphospholipid syndrome (APS) is so far inconclusive [3]. Due to the conflicting data, current guidelines make no strong recommendation regarding testing for these conditions in either a screening capacity before PVT diagnosis or confirmatory once thrombosis has developed [1,4,7,8].

The purpose of this study was to examine the prevalence of inherited and acquired thrombophilia in cirrhotic non-malignant PVT at our center. As secondary aims we explored the influence of these disorders on the clinical presentation of PVT and response to anticoagulation.

The Marques de Valdecilla University Hospital (Santander, Cantabria, Spain) is an urban, academic tertiary care center. Since 2012 we began to test for thrombophilia in patients with cirrhosis who developed non-malignant PVT. In this report, we conducted a retrospective cohort study regarding the presence and influence on outcomes of inherited and acquired thrombophilia in this setting from January 2012 to November 2019. Patients were mainly selected from the database of our Gastrointestinal and Hepatology Service. To ensure the identification of all eligible patients we also reviewed: (1) all thrombophilic studies performed during the study period by the Department of Hematology; (2) hospital discharge records. This search did not include cases of PVT diagnosed at autopsy.

Thrombosis was considered complete when the blood flow was absent, or the thrombus involved more than 90% of the vessel diameter. Otherwise, it was defined as partial. Evolution of thrombosis was classified as previously reported by Delgado et al. [39].

The date of the first abdominal imaging study detecting PVT was considered as time zero for computing follow-up. Clinical, epidemiological, laboratory, and radiological data were collected at PVT diagnosis. Imaging follow-up was not performed according to a strict protocol, but at the discretion of the attending physicians. In general, it consisted of abdominal US and CT/MRI within 6 months of start of anticoagulation and then abdominal Doppler US every 6 months. The most recent follow-up imaging studies were used to evaluate PVT recanalization if performed at least four weeks after PVT diagnosis. Recurrent thrombosis after recanalization was assessed in those patients that stopped anticoagulation therapy before the end study. All data was extracted from the electronic medical record.

Test for thrombophilia were delayed until at least four weeks after PVT diagnosis, at which time LMWH were switched to vitamin K antagonists. Tests included gene mutational analysis for FVL and PTHR, in addition to activated protein C resistance, antithrombin III, protein C and S levels, and antiphospholipid antibodies. The latter included anticardiolipin (aCL), antibeta2 glycoprotein (aB2GPI), and lupus anticoagulant (LA). Screening of myeloproliferative neoplasms by gene mutational analysis for JAK2 (V617F) and CALR was performed since 2015. The hypercoagulable panel was interpreted by the Hematology department, and the presence of liver cirrhosis was taken into consideration in all patients. Diagnosis of APS and myeloproliferative neoplasms were defined according to the revised Sapporo criteria [40] and the revised WHO classification of myeloid neoplasms [41], respectively.

The study protocol conformed to the ethical guidelines of the 1975 Declaration of Helsinki as reflected in a priori approval by the Ethics Committee for Clinical Research of Cantabria (internal code: 2020.246). A waiver of informed consent was provided since the study was considered a retrospective review.

During the study period, 166 cases of PVT were evaluated, of which 89 were excluded (Figure 1). The final cohort included 77 patients with liver cirrhosis and non-malignant PVT in whom a thrombophilic study had been performed. Screening of JAK2 V617 and CARLmutations was investigated in 37 patients (48.1%) and antiphospholipid antibodies were not tested in one patient. The remaining thrombophilic tests were available in the whole cohort. 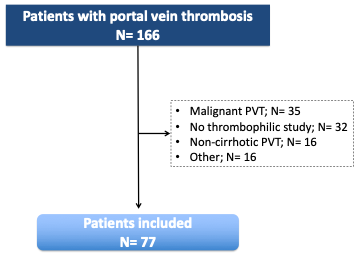 Six patients (7.8%) had a thrombophilic disorder: antiphospholipid syndrome in 4 patients, PTHR mutation in 1 and FVL mutation in another. This latter patient had already been diagnosed of polycythemia vera (JAK2 V617F positive) years before PVT development. A detailed description of these six patients is provided in Table 2.

3.2 Characteristics of patients with and without thrombophilia

The clinical and epidemiological profile of patients with and without thrombophilia was similar. Most patients had an alcoholic liver disease, were decompensated before PVT diagnosis and were on non-selective betablocker treatment in the setting of primary or secondary prophylaxis of variceal bleeding. Three patients, all in the non-thrombophilic group, had suffered a previous arterial or venous thrombotic event (myocardial infarction in 1 patient, deep vein thrombosis in another, and pulmonary embolism in the remaining patient). No female patient in either group had history of abortion.

3.3 Extension and clinical characteristics of thrombosis at diagnosis

No differences in clinical presentation or analytical parameters were observed between patients with and without thrombophilia.

3.4 Anticoagulation and Outcome of Thrombosis

After ceasing anticoagulation, rethrombosis developed in ten patients (32.3%), with a trend for this event to occur more frequently in patients with thrombophilia (100% vs 27.6%; p=0.097). No other difference regarding treatment and outcome was observed between patients with and without thrombophilia

We found a low prevalence of acquired and inherited thrombophilia in patients with cirrhosis and PVT. Our results support testing for these disorders on an individual basis and avoiding universal screening to reduce costs and unwarranted testing. Future prospective studies integrating evaluation of liver disease stage, local and genetic factors are needed to identify individualized criteria to perform these tests and to evaluate their impact on the progression rate or response to treatment.