Methylene blue (MB), as the first fully man-made medicine, has a wide range of clinical applications. Apart from its well-known applications in surgical staining, malaria, and methemoglobinemia, the anti-oxidative properties of MB recently brought new attention to this century-old drug. Mitochondrial dysfunction has been observed in systematic aging that affects many different tissues, including the brain and skin. This leads to increased oxidative stress and results in downstream phenotypes under age-related conditions. MB can bypass Complex I/III activity in mitochondria and diminish oxidative stress to some degree. MB also shows broad spectrum UV absorption capability.

Methylene blue (MB) is a well-established drug, originally synthesized as a textile dye in 1876 [1]. The small molecular weight allows MB to be delivered into tissues fast. MB can be reduced into leucomethylene blue (leucoMB), and therefore, it can be used as an antioxidant (Figure 1A) [2]. MB is an FDA-approved medicine and has been widely used in surgical staining, malaria, methemoglobinemia, etc. [1].
According to the “free radicals theory of aging”, cell and tissue aging are a result of free radicals’ attacks [3]. In human cells, reactive oxygen species (ROS) are mainly produced in mitochondria [4], while aging, declines in mitochondrial mass, respiration capacity, and respiration efficiency were observed in different tissues [5]. Dysfunctional mitochondria lead to decreased ATP production and increased ROS production [6], which would further damage mitochondria. This vicious cycle leads to severe cellular damages and accelerates the aging process. MB’s antioxidative properties mainly improve mitochondrial function and break the ROS–mitochondrial damage cycle [7][8], which makes it a great candidate as an anti-aging drug.
MB is a phenothiazine derivative and can be reduced into leucoMB (Figure 1A). In its oxidized state, MB solution is blue, while leucoMB is colorless [9]. MB is hydrophilic and lipophilic, which makes it highly permeable through biomembranes [10]. MB is also positively charged [11]. The redox potential of MB is 11 mV, and it can cycle readily between oxidized and reduced forms in mitochondria because of its low redox potential [8]. Such characteristics allow MB to work as a catalytic redox cycler in mitochondria, promoting cytochrome oxidase activity and ATP production (Figure 1). MB also decreases the production of ROS via bypassing Complex I/III activity [11][12]. MB receives electrons from NADH through Complex I, converting to leucoMB. LeucoMB can directly transfer these electrons to cytochrome c, re-oxidized to MB. Therefore, MB has the potential to protect cells against oxidative stress under pathological conditions. 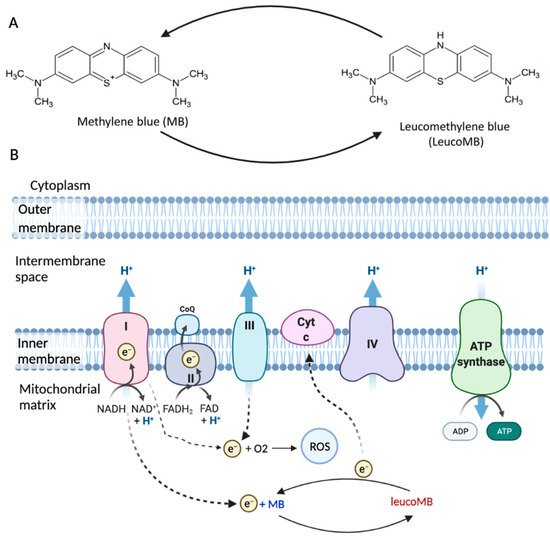 Figure 1. The structure and function of MB. (A) MB is a phenothiazine derivative, and its reduced form is leucoMB. (B) Mitochondrial electron transport chain (ETC) is associated with ATP production and ROS production. MB can work as a catalytic redox cycler in mitochondria and bypass Complex I/III activity (Figure adapted from “Electron Transport Chain”, by BioRender, 10 October 2021, retrieved from https://app.biorender.com/biorender-templates/t-5edadc578a691400acf3c4ec-electron-transport-chain).

MB is highly lipophilic and able to effectively cross the blood-brain barrier (BBB) [10]. MB concentration is found to be higher in the brain than in plasma after oral administration or intravenous injection in rats [13]. Besides, it has a strong affinity for mitochondria [14]. Different from the other antioxidants such as MitoQ and MitoVitE, MB can reduce the production of free radicals by bypassing Complex I/III activity rather than scavenging free radicals [15]. In fact, the membrane potential in Complex III-inhibited mitochondria can be partially restored by MB in both mice and rats [11]. MB, acting as an electron donor, can also increase the expression of brain cytochrome oxidase and oxygen consumption in vivo [16][17]. Besides, low doses of MB were shown to effectively inhibit nitric oxide (NO), which inhibits cytochrome c oxidase activity [18][19]. All these properties make MB a promising drug candidate for brain diseases’ treatment.

Several studies suggest that there is an association between mitochondrial dysfunction and abnormal processing of Aβ and tau [20][21][22][23]. Amyloid precursor protein (APP) can be trapped in the mitochondrial membrane and impair mitochondrial function [24]. Overexpression of tau can also result in mitochondrial dysfunction by decreasing ATP production and increasing oxidative stress [25]. Conversely, the damaged mitochondrial function can induce aberrant Aβ production and promote abnormal phosphorylation of tau [26]. MB was reported to prevent Aβ and tau aggregation or dissolve existing aggregates via autophagic clearance, and therefore alleviate downstream pathological consequences [27][28][29][30]. MB could directly or indirectly target β-secretase cleavage of amyloid precursor protein (APP) and regulate the generation of Aβ [31]. MB’s role in Aβ and tau aggregation clearance may help improve mitochondrial functions in Alzheimer's Disease (AD) neurons and thus contribute to AD treatment. Besides, cytochrome oxidase activity has been shown to decline in AD [32], while MB can increase the enzymatic activity of cytochrome oxidase, which results in an increased oxidative metabolic capacity of neurons [33].

Parkinson's Disease (PD) is another neurodegenerative disease associated with aging. It is one of the most common movement diseases featured by dopaminergic neuronal damage [34]. The pathological hallmark of PD is Lewy Bodies and Lewy Neurites, intracellular aggregates of the protein α-synuclein (α-syn) [35]. A-syn can lead to progressive mitochondrial dysfunction when translocated to the mitochondria [36]. Mitochondrial dysfunction is considered the primary cause of dopaminergic apoptosis via inducing oxidative stress in PD [37]. Based on MB’s role in improving mitochondrial function, MB could be a promising treatment in PD.

In addition to its beneficial role in age-related brain disorders, MB is a promising memory enhancer. Since metabolic derangement is observed in old brains, and mitochondrial impairment accumulates over time, improving mitochondria may help neurons maintain their health and improve their functions [38][39][40].

Oxidative stress is involved in both intrinsic and extrinsic skin aging [83 ]. Especially when skin is exposed to certain environmental risk factors such as UV radiation, increasing oxidative damage will decrease collagen synthesis and increase collagen breakdown, leading to accelerated aging. Antioxidants such as MB can protect skin and slow down the aging process (Figure 2). 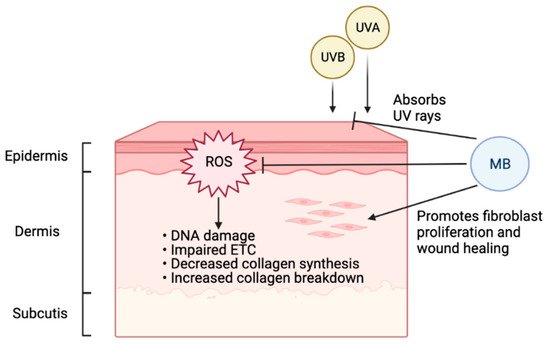 A previous study has shown that MB treatment in normal fibroblasts could increase lifespan and cell proliferation while reducing aging markers [41]. In that study, MB increased cytochrome oxidase by 30%, enhanced oxygen consumption by 37–70%, and reversed premature senescence caused by H2O2 or cadmium, and the ratio MB/cytochrome c could be important for MB’s protective role. Interestingly, when MB was compared with common antioxidants used in skincare, including vitamin C and retinol (vitamin A), MB-treated skin cells outperformed both of them significantly in terms of promoting cell proliferation and reducing age-related markers [42][43]. In addition to its potent antioxidant function, MB treatment in skin fibroblasts could stimulate the expression of ECM proteins, including upregulation of elastin and collagen 2A1, the two vital proteins for healthy, youthful skin  [42]. Another study showed that MB provides broad-spectrum absorption of UV rays and mitigates DNA double-strand breaks caused by UVB irradiation in human keratinocytes [43]. Together, this evidence supports MB as protective and beneficial to human skin, suggesting that the inclusion of MB in daily skincare may effectively delay photoaging.

MB can facilitate wound healing. During aging, the proliferation and migration of fibroblasts are often decreased, and collagen and elastin in the ECM are degraded [44]. Therefore, the repair capabilities of the skin decline due to structural and functional changes. Our study indicated that MB treatment could promote fibroblast migration and proliferation in the wound healing process [42]. In skin survival burn models in rats, MB treatment could reduce necrosis progression, which might be mediated by decreasing oxidative stress through blocking nitric oxide (NO) [45]. Moreover, MB can facilitate wound healing by reducing antimicrobial burden and decreasing hyper-granulation. MB also has a drying effect without harming healthy cells [46][47][48]. Overall, MB was shown to improve tissue viability with little to no irritation in laboratory models.

MB has shown potential for the treatment of Hutchinson-Gilford Progeria Syndrome (HGPS), which is a genetic, premature aging disorder caused by a C to T de novo point mutation on exon 11 of the LMNA gene [49]. The mutation causes the production of progerin in the place of Lamin A, which holds a cryptic splice site that results in a 50 amino acids deletion of the protein [49]. The deletion removes a critical protease cleavage site, making progerin an aberrant form of pre-Lamin A with a permanent farnesyl modification. Progerin is then localized to the nuclear envelope, where it becomes fixed in the nuclear membrane [49]. Progerin disrupts the nuclear skeleton, leading to nuclear abnormalities, blebbing of the nuclear envelope, transcriptional changes, and severe cellular stress, which ultimately manifest as a rapid aged phenotype in patients [50][51][52]. Mitochondrial dysfunction is observed in both HGPS fibroblasts and animal models, with elevated levels of mitochondrial-specific superoxide (MitoSOX), ROS, and suppression of the mitochondrial biosynthesis gene PGC-1α [53][54].
As a mitochondrial antioxidant and highly permeable molecule, MB has demonstrated the ability to rescue HGPS phenotypes [55]. Our group found that MB treatment not only reduced mitochondrial defects but also rescued the transcriptional changes in HGPS. Besides, MB demonstrates the ability to solubilize progerin in the nuclear envelope, correcting the blebbed nuclei of HGPS cells and drastically reducing cellular stress. Whether these effects are related to MB’s antioxidant characteristic remains unclear and more research is underway.