Retinal neurodegeneration affects an increasing number of people worldwide causing vision impairments and blindness, reducing quality of life, and generating a great economic challenge. Due to the complexity of the tissue, and the diversity of retinal neurodegenerative diseases in terms of etiology and clinical presentation, so far, there are no cures. The discovering of the intracellular monomeric globin neuroglobin (NGB), found at high concentration in the retina, has opened new possibilities for the treatment of retinal disease.

Retinal neurodegenerative diseases, including diabetic retinopathy, DR, retinitis pigmentosa, RP, age-related macular degeneration, AMD, or glaucoma, are the most frequent causes of irreversible vision impairment and blindness worldwide [1][2]. Despite the high economic and social impact of vision impairment and blindness, there are no cures for retinal neurodegenerative pathologies [2][3].

Over the last 20 years, the identification of neuroglobin (NGB) as an intracellular monomeric globin preferentially expressed in neurons which functions as endogenous cell protectant, has defined a new possible target for therapeutic intervention in neuronal pathologies spanning from ischemic injuries to neurodegeneration [4][5]. Since its discovering in 2000 [6], the identification that hypothalamus and retinal cells express the NGB at the highest level than other brain areas, have led to consider this globin as a possible oxygen carrier protein in the retina, raising further interest about the globin role in the retinal physiology and on its neuroprotective potential in the visual system.

The brain was believed to lack any system able to promote the storage and/or the diffusion of oxygen similar to what occurs in the muscle system with myoglobin (MB). However, the discovery of NGB as a monomeric intracellular globin, that has been so named for its preferential expression in the central and peripheral nervous system, has raised the possibility of a myoglobin-like function of NGB [6][7].

Data evidencing the low intracellular concentration (~1 μM) of the globin in the total brain ruled out the possibility of a NGB function in the delivery/storage of oxygen in neurons [8]. Despite this, in a pioneering study, Schmidt and collaborators (2003) first evidenced that the NGB levels in retinal extracts from mice were 100-fold higher with respect to total brain extracts estimating a NGB concentration in the retina in the range of 100 to 200 μM, comparable to MB levels in muscle and accountable for a possible NGB function in the transport or short-term storage of oxygen [9].

Overall, NGB distribution in mouse [10][9][11][12] canine [13], rat [10][14][15], and human [16][17] retina has been reported especially in high oxygen-consuming layers of the tissue including photoreceptors, plexiform and ganglion cell layers, whereas in zebrafish retina, under normal conditions, NGB mRNA has been reported mainly in the amacrine cells at the INL [18]. Additionally, the presence of both NGB mRNA and protein were also found in mouse optic nerve and, in particular, in RGCs axons, but also in astrocyte supporting cells [19], shifting the paradigm about the selective expression of NGB in neuronal cell type in brain and retina [16][20][21].

The oxygen binding properties of NGB and its expression pattern closely related to mitochondria and to cells with the higher metabolic rate sustain a major NGB role in oxygen delivery or storage in the retina under physiological conditions where it contributes to the oxygen flow toward mitochondria preventing hypoxia in retinal disease (Figure 1) [10][9][15].

However, despite a large pattern of similarities, the analysis of NGB expression and distribution among the retinal layers have also evidenced incongruences among species and experimental conditions, showing, sometimes, a very restricted expression of NGB under physiological condition in just some layers and cells type of the retina [17][22]. So that, the definition of the exact distribution of NGB and its function in the oxygen metabolism in the retina is yet far to be completely solved.

Beyond the possible interspecific differences of NGB in the retina, the peculiar property of the globin as an inducible protein whose levels and intracellular distribution is highly modulated by physiological states [23][24], hormones (e.g., 17β-estradiol-E2 [25][26]) and stressing condition [25][27][28][29][30][31][32][33] suggest a strong “plasticity” of NGB protein and its functional outcomes. Retinal NGB is rapidly overexpressed under hypoxia/ischemia insults in rats [34] and mice [12], after optic nerve injury in mice [22] and zebrafish [17], elevated intraocular pressure (IOP) [11] and blue (453 nm) light exposure [35] in rodent models, although the expression of the globin decrease to the normal levels [11][18][34][35] or at lower levels at longer time of the insult [12][22][36], at least in part due to the stress-induced retinal cell death.

Consequently, since the inducible nature of NGB and the proposed function in the rapid stress response aimed to preserve retinal tissue [34][35], NGB levels and intracellular/extracellular distribution could differentially reflect the retinal status and the stressing condition (Figure 1). 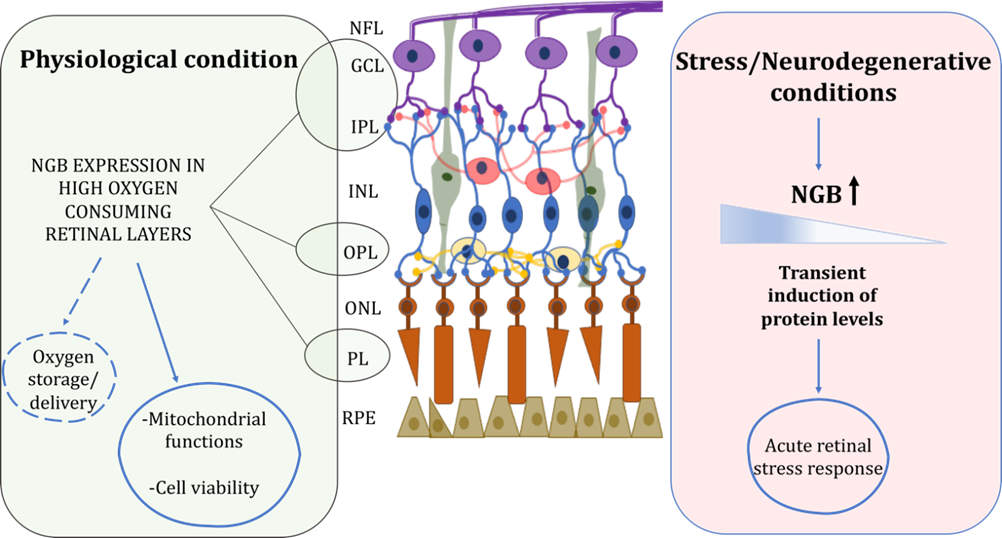 The preferential expression of NGB in the retina suggests that it can be sensitive to multiple retinal diseases. Based on the time-dependent modulation of retinal NGB levels under stressing conditions, the globin might play a key compensatory neuroprotective function in preserving retinal cells under acute stress injury, acting in the rapid cell stress response that, in turn, could be potentially linked to the use of NGB as a disease marker at the early stages (Figure 1) [34][35].

Despite studies reporting no effects of lack of NGB on light-induced cellular stress response [37] have raised doubts over the functional role of endogenous NGB in retinal physiology, several reports demonstrated a function of NGB exogenous overexpression in preventing retinal disease and/or in maintaining retinal structural and functional integrity upon stress exposure. Intriguingly, NGB overexpressing mice exposed to retinal ischemia-reperfusion (IR) injury showed significant preservation of retinal thickness [12]. At subcellular levels, overexpressed NGB localized at mitochondrial levels in ganglion cells, INL and ONL where it exerted a neuroprotective and anti-apoptotic effect under IR conditions by inhibiting the mitochondrial oxidative stress and caspase-3 activation [1]. This evidence sustains the idea that, as well as in brain neurons (for review see [4][5]), up-regulated NGB could directly affect the apoptotic mitochondrial pathway. Furthermore, in glaucoma mice models characterized by the genetic (DBA/2J mice) or experimental induction of intraocular hypertension, the tight connection between NGB mitochondrial location and neuroprotective effect has been demonstrated [11][38]. Indeed, the ability of overexpressed NGB to increase the activity of mitochondrial complex I and III, accompanied with attenuation of ROS production and increase in mitochondrial respiration recovery have been related to the protective function of the globin in preventing RGC loss and nerve fibers disappearance under glaucomatous neuronal damage [11][38]. In the mice model of glaucoma induced by experimental ocular hypertension, NGB-induced RGCs survival was not correlated with the preservation of visual pathway [11]. However, in the genetic model of glaucomatous injury, gene therapy for inducing NGB overexpression improved the cortical response to light stimulation in both mice treated before the beginning of progressive degeneration (2-months old mice) or at an advanced stage of the disease when the neuronal loss has begun (8-months old mice) [38]. In the latter mice, the late treatment for inducing NGB overexpression has been reported to just preserve the remaining RGCs, sustaining a main role of NGB in the protection of retinal neuronal cells promoting their mitochondrial functionality to keep visual function in spite of previous reduction in neuronal cells [38]. Consistently, in Hq mice, overexpressed NGB has been demonstrated to restore the mitochondrial function and improve RGCs survival, to maintain nerve fiber integrity, reduce the glial cell activation and, in turn, protect the visual functions [39]. Furthermore, similar effects were also observed in mice treated with N-Methyl-N-nitrosourea (MNU), an alkylant toxicant that causes the selective photoreceptor apoptosis in the mammalian retina, where the induction of NGB overexpression through an adeno-associated-virus vector ameliorated the oxidative stress and apoptotic cell death in photoreceptor cells alleviating the morphological alteration of the retina and the visual impairments [40].

In addition to the transgenic-induced overexpression of NGB, an alternative approach using the injection in the mouse eyes of a chimeric human-zebrafish NGB with the ability to cross the plasma membrane, demonstrated that high levels of intracellular NGB led to a threefold increase in survival of RGCs accompanied with a significant axon-regenerating outgrowth after optic nerve injury [22]. Similarly, the intravitreal injections of mammalian exogenous NGB have been described to restore the long-time decrease in endogenous NGB after 7 days of hypoxia injury and to functionally prevent the stress-induced ganglion cell death and microglial activation, proposing the NGB injection as a potential therapy for retinal disease [36].

Despite the efficacy of genetic and molecular approaches in up-regulating intracellular NGB levels and enhancing its neuroprotective effects, the identification of exogenous or endogenous inducers of NGB has been considered a valuable way to understand the molecular pathways regulating NGB levels and, in turn, to deepen the NGB neuroprotective functions aimed to preserve neuronal functionality under stressing conditions. In line with the overarching goal to find out exogenous molecules able to potentiate the NGB neuroprotective function, several natural and synthetic compounds have been reported capable to modulate NGB protein levels [4][41]. At retinal levels, Tao and coworkers have indicated that the intravenous treatment with hemin restored the NGB depletion in MNU-treated mouse retina rescuing cone photoreceptor cells and preserving the morphological and functional integrity of the retina, as indicated by the optical coherence tomography (OCT), behavioral and electroretinogram (ERG) examinations. On such results, the up regulation of endogenous NGB by exogenous compounds as a potential tool for the treatment of retinal neurodegeneration has been proposed [42].

In this context, it may be thought that any compound able to induce the globin intracellular levels before the stress and/or in a persistent manner, could preserve retinal cells from death and, in turn, degenerative process through a pre-conditioned mechanism (Figure 2). 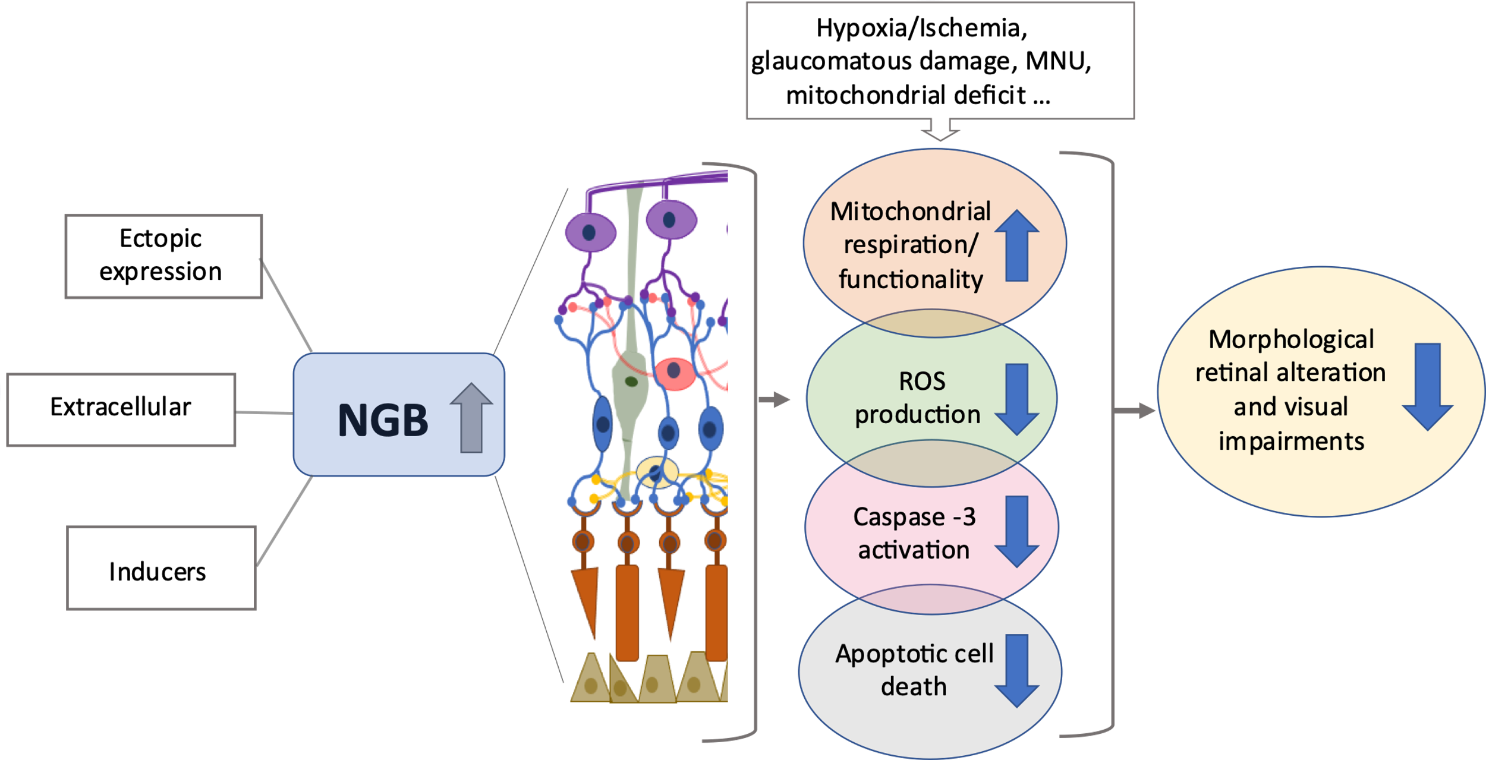 Based on the common mechanisms of neurodegeneration across different retinal neurodegenerative diseases including oxidative stress, inflammation, and apoptosis, several therapeutic approaches are aimed at restoring an adequate retinal environment to promote cell viability by using compounds able to impact several biochemical pathways [3]. From the data here reviewed two consequences derived: (a) strategies that can up-regulate the expression of NGB are expected to be neuroprotective and, vice versa, (b) the potentiation of NGB accumulation could be a common outcome of neuroprotective agents. In the next future, the identification of novel therapeutic strategies for retinal degeneration and/or the prediction of efficacy of known ones could be addressed by evaluating their impact on NGB levels and functions, opening new perspectives in preventive and/or curative opportunities for retinal disease.