Tricuspid atresia (TA) is a cyanotic, congenital heart defect (CHD) and is defined as congenital absence or agenesis of the morphologic tricuspid valve. It is the third most common cyanotic CHD, and is the most common cause of cyanosis with left ventricular hypertrophy. The prevalence of TA is estimated to be 2.9% of autopsy cases and 1.4% to 1.5% of the clinical cases of CHD.

TA has been classified on the basis of valve morphology ( Figure 1 ) [1,5,6], pulmonary vascular markings on chest roentgenogram [7], and associated cardiac defects ( Figure 2 ) [1,8,9,10,11]. On the basis of the morphologic appearance of the atretic tricuspid valve, it has been characterized as muscular, membranous, valvular, Ebstein’s, unguarded with muscular shelf, and atrioventricular canal types ( Figure 1 ) [1,6,12]. The muscular type is the most common variety and constitutes 89% of all TA cases [1,12,13]; other types occur with much lower frequency, as shown in Figure 1 . The classification based on associated cardiac defects largely centers on the interrelationship of the great arteries ( Figure 2 , top): Type I, normally related great arteries; Type II, d-transposition of the great arteries; Type III, malpositions of the great arteries other than d-transposition; and Type IV, truncus arteriosus. Each type is again divided into subgroups on the basis of the pulmonary artery anatomy ( Figure 2 , bottom): subgroups—a. pulmonary atresia, b. pulmonary stenosis or hypoplasia, and c. normal pulmonary arteries (no pulmonary stenosis). It is generally thought that classification based on associated cardiac defects is more useful clinically [1,13]. 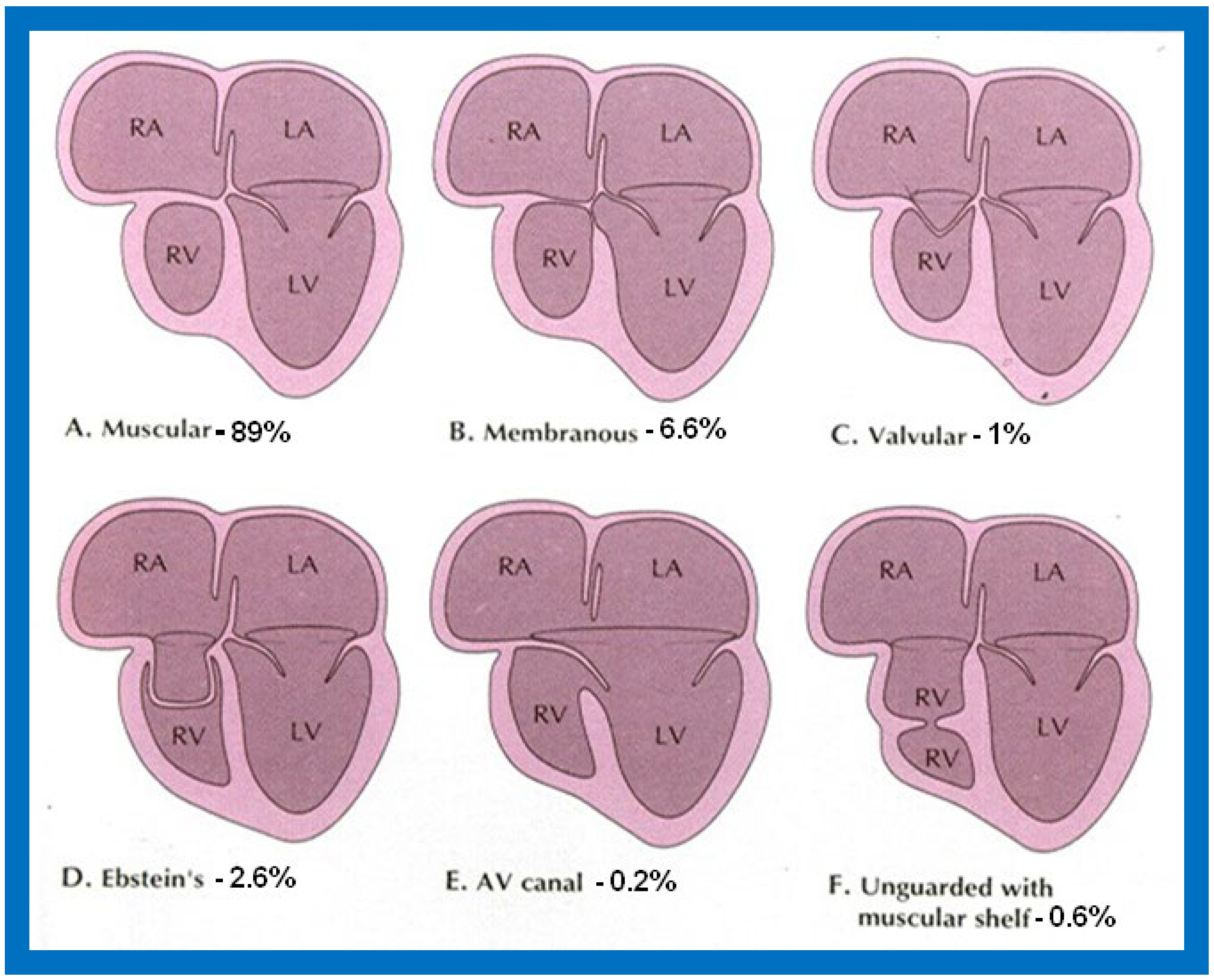 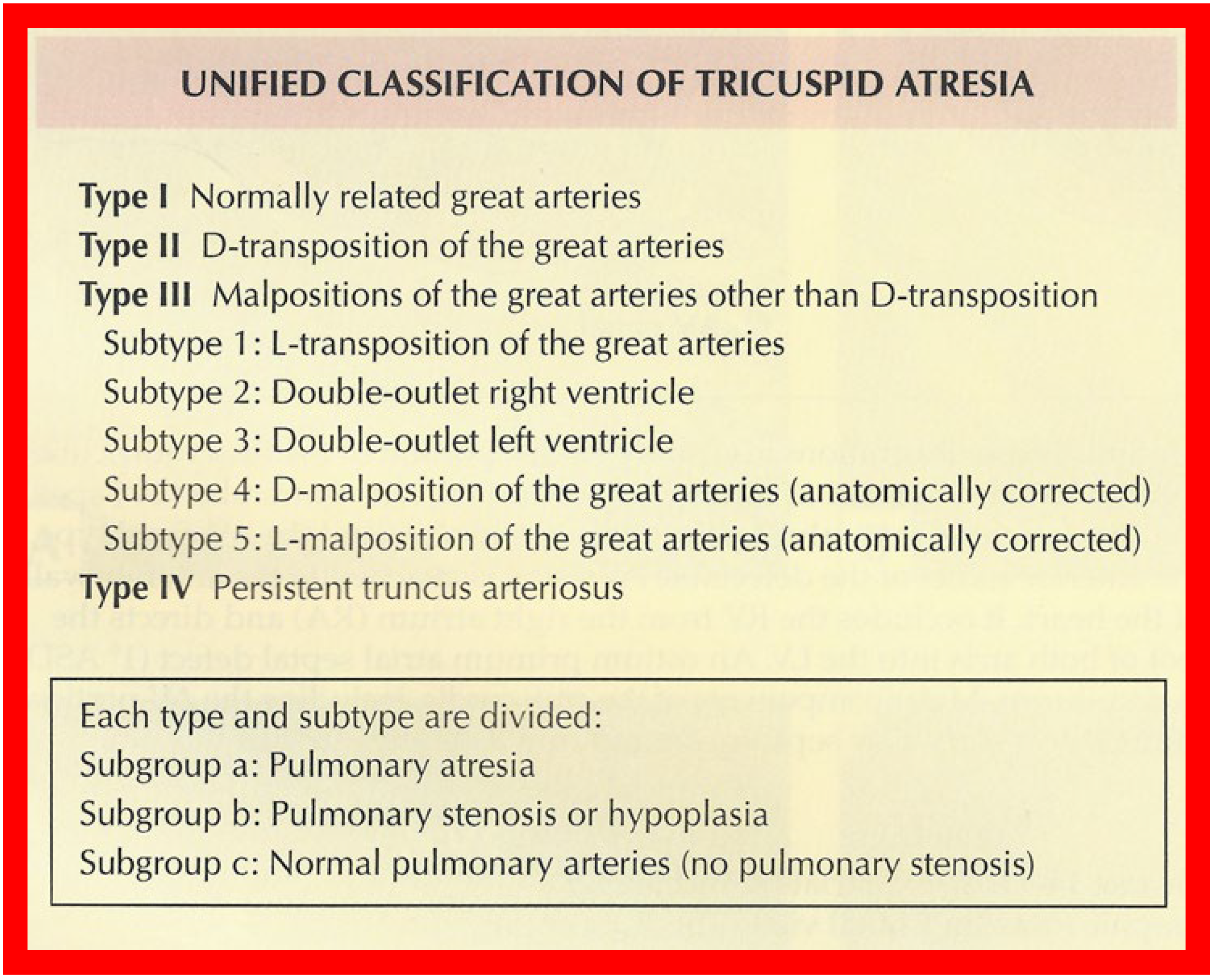 The right atrium (RA) is enlarged and the atretic tricuspid valve is seen as a dimple or a localized fibrous thickening in the floor of the right atrium at the anticipated site of the tricuspid valve [10]. An inter-atrial defect is necessary for survival and is typically a stretched patent foramen ovale (PFO). However, occasionally, an ostium secundum atrial septal defect (ASD) or an ostium primum ASD may be present, facilitating right to left shunt. The left atrium (LA) is enlarged, especially when the pulmonary blood flow is increased. The mitral valve is usually bicuspid and, morphologically, a mitral valve. However, its orifice is large and occasionally incompetent. The left ventricle (LV) is evidently a morphological LV, but it is enlarged and hypertrophied. The right ventricle (RV) is hypoplastic and is not sufficiently large in size to support pulmonary circulation in most patients.

The ventricular septum is intact in a rare patient, but, usually, a ventricular septal defect (VSD) is present; this may be large or small, or multiple VSDs may be seen. The VSD may be: conoventricular or perimembranous, located inferior to the septal band; a conal septal malalignment type, located in between the anterosuperior and posteroinferior limbs of the septal band; muscular, located inferiorly in the muscular septum; or, rarely, of an atrioventricular canal type. In the author’s personal experience, VSDs are most commonly seen in the muscular septum, are restrictive [14,15,16] and cause subpulmonary obstruction in Type I patients and potential subaortic stenosis in Type II patients [14,15,16,17,18,19,20,21].

The great vessel relationship is variable, as discussed above ( Figure 2 , top). The ascending aorta is either normal or slightly larger than normal. The RV outflow tract is atretic, narrowed, or normal, depending upon the subgroup (a, b, or c). In patients with normally related great arteries ( Figure 2 ), the obstruction to pulmonary blood flow is frequently at the VSD level although subvalvar or valvar (very rare) pulmonary stenosis or the narrow tract of the hypoplastic RV may occasionally be responsible for such obstruction. In cases with the transposition of the great arteries (Type II), the pulmonary obstruction is usually subvalvar. In cases with pulmonary atresia, either a patent ductus arteriosus (PDA) or aortopulmonary collateral vessels are present. Other abnormalities may be present in nearly 30% of tricuspid atresia cases [22]; significant of these are the coarctation of the aorta (in Type II - transposition cases) and persistent left superior vena cava, which have therapeutic implications.

2. Echo-Doppler Features of TA on the Basis of Current Technology 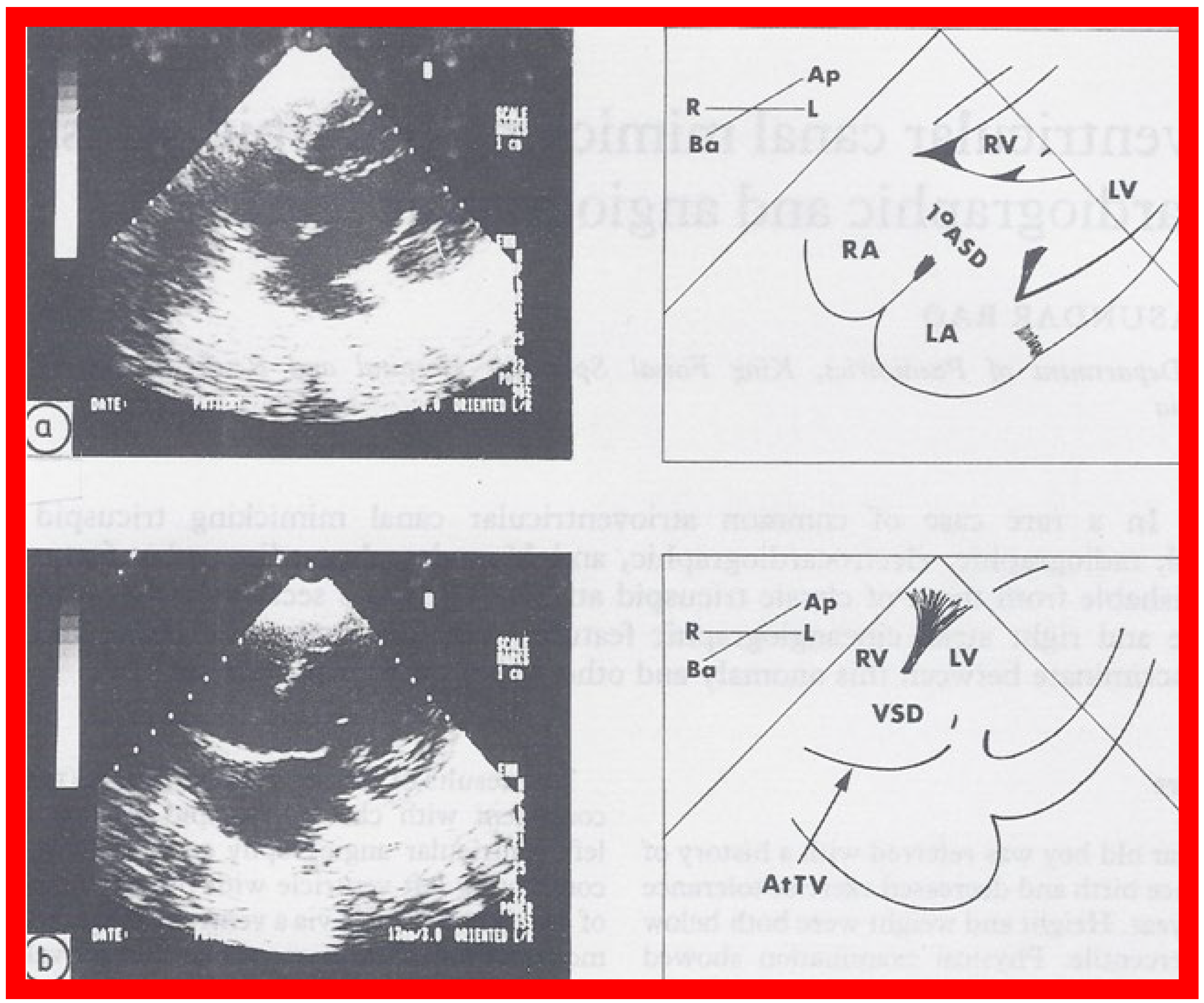 Figure 7. Selected two dimensional, subcostal, four chamber echocardiographic frames with an open (a) and closed (b) atrioventricular valve. Line drawings on the right of (a,b) are made for greater clarity and for labeling. A large ostium primum atrial septal defect (10 ASD) is shown in (a). When the large atrioventricular valve leaflet is open (a), it completely closes the right ventricle (RV) from the right atrium (RA) and the ventricular septal defect (VSD) and allows the emptying of blood from both atria into the left ventricle (LV). When the atrioventricular valve leaflet is closed, (b), it continues to occlude the RV from the RA while allowing the VSD to freely communicate between the RV and LV. Ap, Apex; AtTV, atretic tricuspid valve; Ba, base; L, left; LA, left atrium; R, right. Reproduced from Rao PS. Brit Heart J 1987;58:409–412 [30].

Figure 8. Line drawings demonstrating two dimensional echocardiographic appearances in a subcostal four chamber view of the muscular (A), membranous (B), and atrioventricular canal (C) variants of tricuspid atresia. (A) The atretic tricuspid valve is represented by a thick band of echoes between the right atrium (RA) and the small right ventricle (RV) in the muscular type. (B) The tricuspid valve is represented by a thin line in the membranous type. Note that crux of the heart (arrows in (A,B)) is clearly seen in both these types (A,B). The attachment of the anterior leaflet of the detectable atrioventricular valve to the left side of the interatrial septum is evident. (C) In the atrioventricular canal type of tricuspid atresia, the anterior leaflet of the detectable atrioventricular canal is attached to the anterior wall of the heart, occluding the right ventricle from the right atrium, and allows the exit of blood from both atria into the left ventricle (LV). The crux cordis and the atrioventricular portion of the interventricular septum are not seen. Reproduced from Rao PS. Brit Heart J 1987;58:409–412 [30] and from Reference [12].

Following the demonstration of the atretic tricuspid valve, the sizes of the cardiac chambers are evaluated both by M-mode (Z scores) and 2D echocardiography; an enlarged RA, LA and LV and a small RV are seen ( Figure 4 , Figure 5 and Figure 6 ). Pulsed (not shown) and color Doppler ( Figure 9 ) studies are helpful in illustrating right to left shunt across a PFO or an ASD. 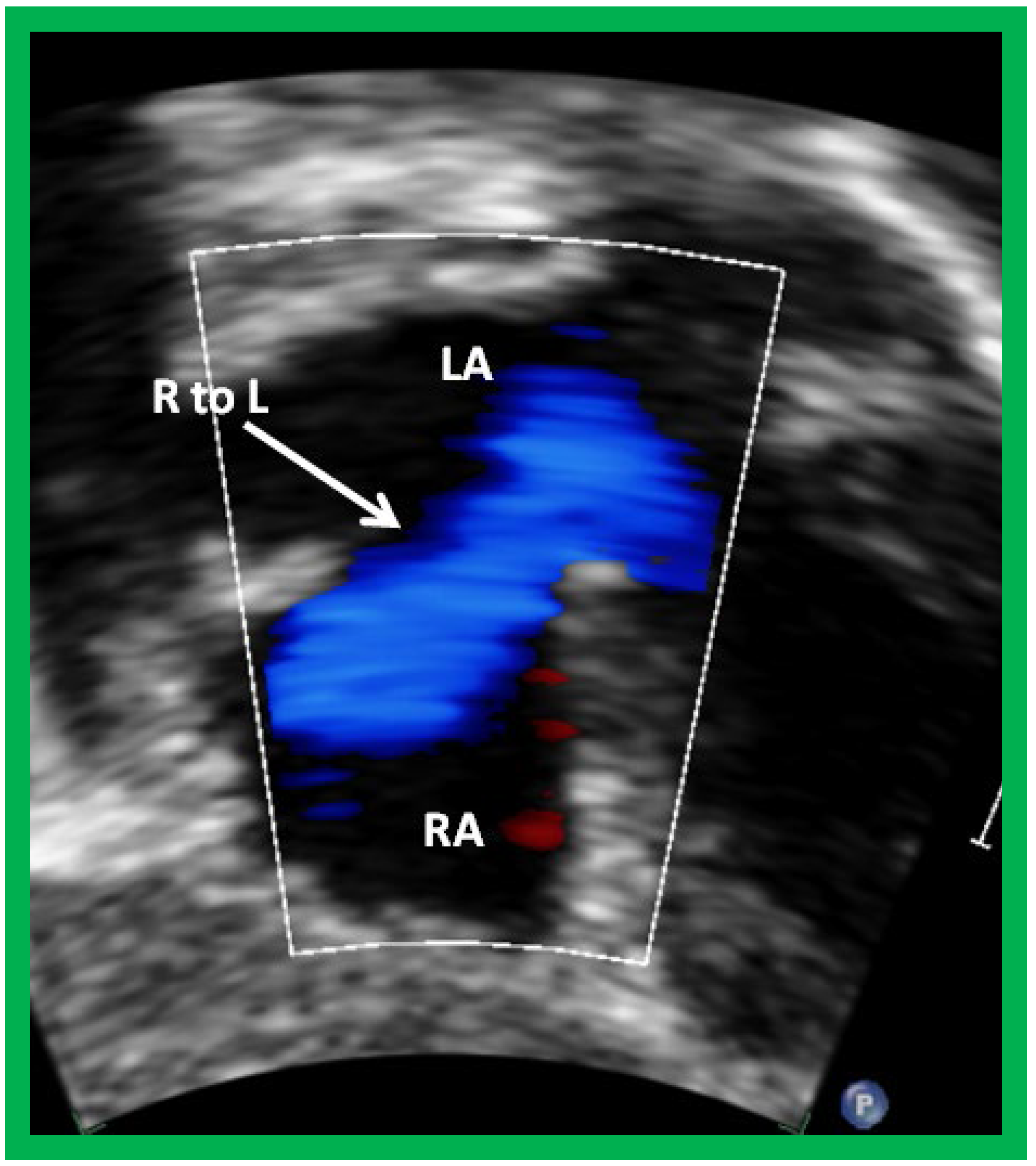 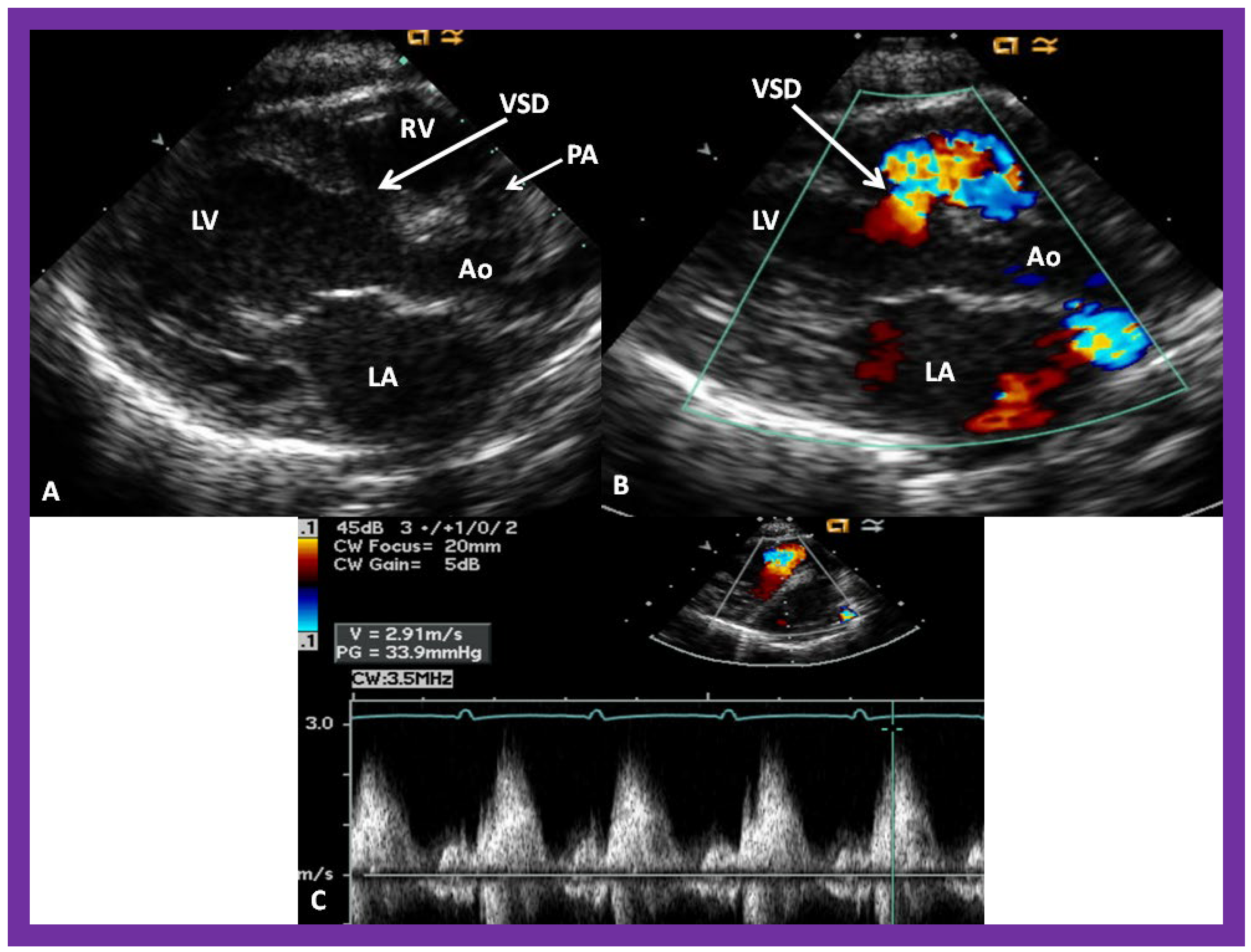 Figure 10. Selected video frames from parasternal long axis views of a patient with tricuspid atresia with normally related great arteries demonstrating an enlarged left atrium (LA) and left ventricle (LV), a small right ventricle (RV) and a moderate sized defect (VSD) (thick arrow) on 2D (A) and color flow (B) imaging. The turbulent flow (B), with a Doppler flow velocity of 2.91 m/s by continuous wave Doppler (C) across the VSD, suggests some restriction of the VSD. Ao, Aorta; PA, pulmonary artery. Reproduced from Reference [29].

Figure 11. (A) A selected video frame from parasternal long axis views of a patient with tricuspid atresia and transposition of the great arteries demonstrating the left atrium (LA), left ventricle (LV), a very small right ventricle (RV) and a moderate sized ventricular septal defect (not marked). The vessel coming off the LV is traced in (B) and shown to bifurcate into the left (LPA) and right (RPA) pulmonary arteries, confirming that this vessel is the main pulmonary artery (MPA), consistent with transposition of the great arteries. Ao, Aorta. Reproduced from Reference [29]. 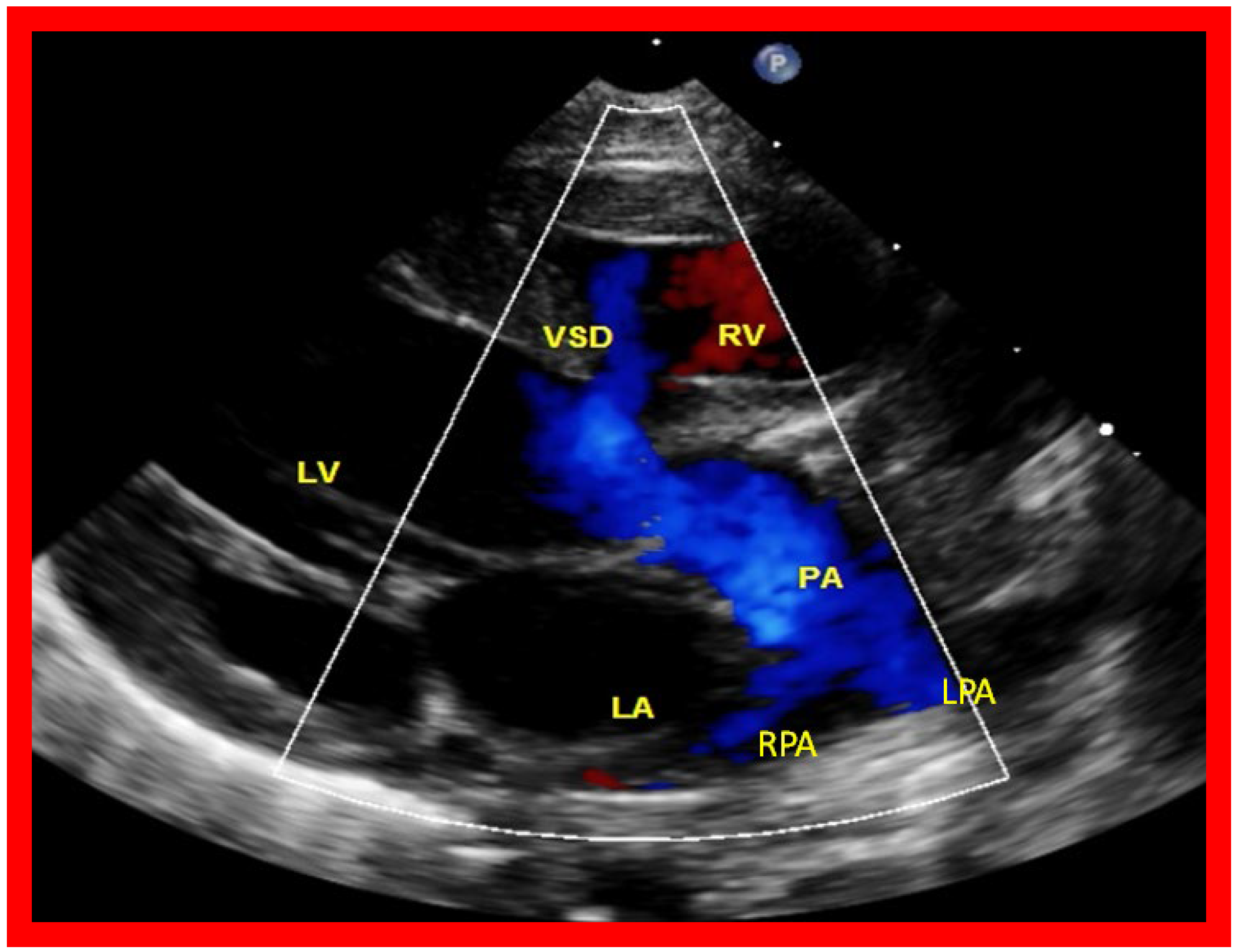 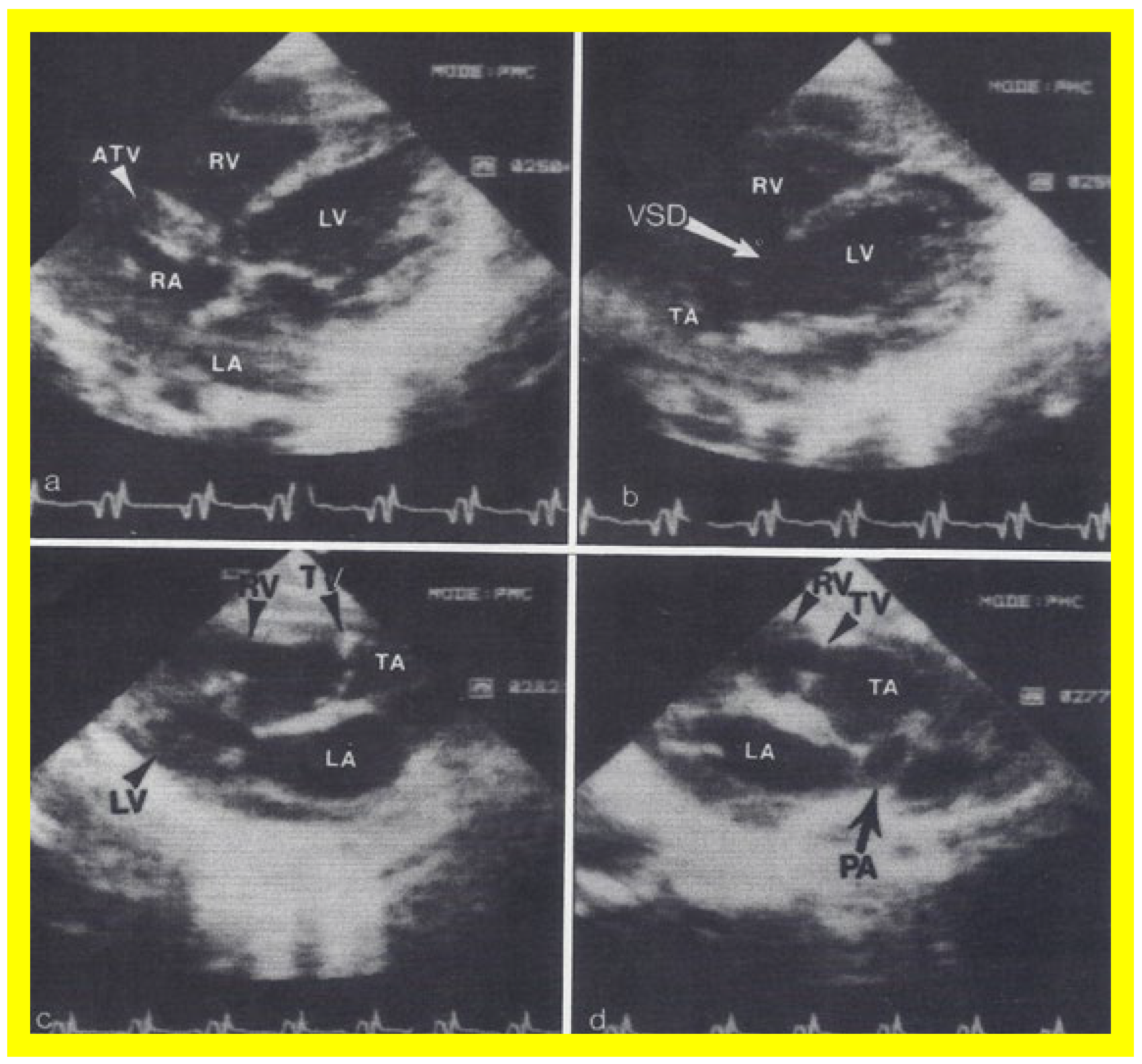 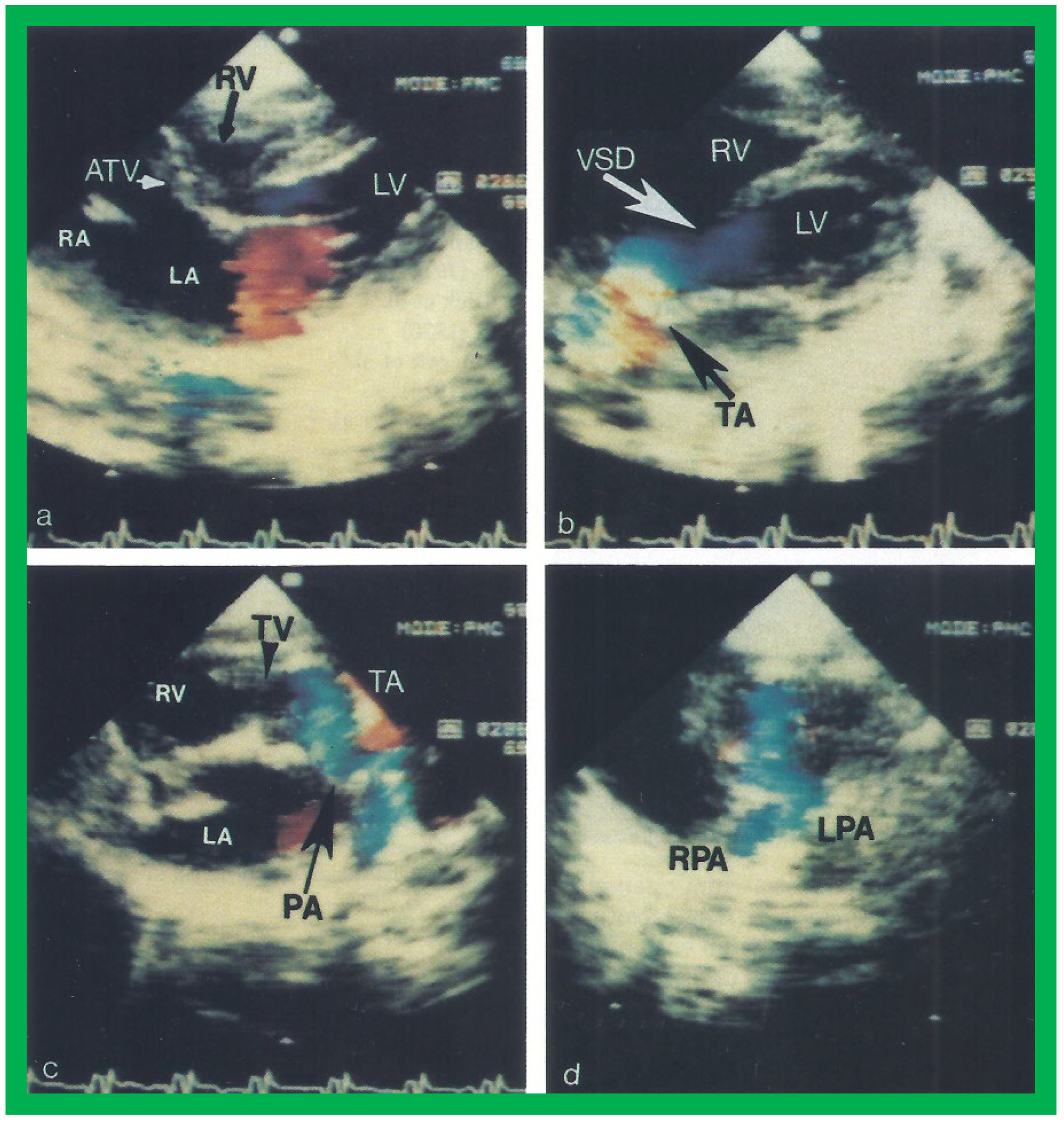 Figure 14. Video frames from a two dimensional echocardiographic and color Doppler study demonstrating (a) an atretic tricuspid valve (ATV) between the right atrium (RA) and right ventricle (RV), and blood flow from the left atrium (LA) into the left ventricle (LV) across the mitral valve. The RV (arrow) is very small and hypoplastic. (b) LV and RV with a large ventricular septal defect (VSD) below the truncus arteriosus (TA). Turbulent flow across the truncal valve suggests truncal valve stenosis. (c) The origin of the pulmonary artery (PA) from the TA by color flow (arrow), and (d) the division into right (RPA) and left (LPA) pulmonary arteries from the PA in a short-axis view. TV, truncal valve leaflets. Reproduced from Rao PS, et al. Am Heart J 1991;122:829–835 [31].

TA is the third most common cyanotic CHD and accounts for almost 1.5% of all CHDs. TA is classified on the basis of the atretic tricuspid valve morphology and associated heart defects, such as great artery relationship and pulmonary outflow tract status. The atretic tricuspid valve can easily be demonstrated on 2D echocardiography. Ventricular sizes and LV systolic function are first evaluated, followed by the delineation of great artery anatomy, the status of the pulmonary outflow tract, the demonstration of adequacy of ASD/PFO, the size of VSD, and other associated cardiac defects. Echo-Doppler studies are also useful in evaluating the results of palliative procedures performed early in life, such as aorto–pulmonary shunts and the banding of the PA. Evaluation following bidirectional Glenn and Fontan completion, the assessment of potential causes of interstage mortality, and the identification of complications associated with all surgical procedures are also feasible by the echocardiographic studies. Examples of typical echocardiographic findings of most of the above scenarios were presented. It is concluded that echo-Doppler studies are valuable in the diagnosis and management of TA.