Tin-based perovskite solar cells exist in p-i-n or n-i-p configurations alternating the position of the electron transport (n) and hole transport layer (p). Therefore, during fabrication of these layered devices, it is very common to encounter energy level mismatches and defects at the interface. The simplest trick to improve the performance of tin-based perovskite solar cells is to add an interfacial layer to minimise the energy mismatch and defects at interfaces.

The absorption layers of traditional lead-based perovskite solar cells possess an APbX 3 configuration, where A refers to a metal cation or organic cation such as monovalent cesium cation (Cs + ), methylammonium (CH 3NH 3, MA + ), formamidinium ( NH 2CHNH 2, FA + ) and so on; X is the halogen anion, such as iodide (I − ), bromide (Br − ), chloride (Cl − ), or a combination of the above halogens [1]. Since the last decade, there are intriguing research studies worldwide on lead-based perovskite solar cells. There exists a wide range of variety and flexibility in perovskite solar cells like fine tuning the perovskite composition [2][3][4][5], types of additives [6][7][8], structure [9][10], employing different electron transport or hole transport layers [11][12]. There is a significant development in PCE and stability of perovskite solar cells and many commercial companies across the world are investing heavily in the manufacture of these 3rd generation solar cells. A few to mentions are Oxford PV GmbH (Brandenburg, Germany); Saule Technology (Wroclaw, Poland); Microquanta Semiconductor (Hangzhou, China); Solaronix (Aubonne, Switzerland); Swiftsolar (Sancarlos, CA, USA), etc. However, the highly toxic lead metal present in these solar cells still remains a major environmental concern [13] as the recycling of such a heavy metal is complicated and expensive. Therefore, researchers have been looking for metal ions that can replace lead in perovskite materials. The radius must not be too different from that of lead ions (Pb 2+ ), otherwise the replacement will cause lattice distortion and form defects. In the periodic table, Sn, located in the same main group as Pb and presenting a close atomic radius, has attracted huge attention from the scientific community. The ionic radius of Pb 2+ is 119 pm and that of Sn 2 + is 118 pm, which allows the simple replacement of Pb by Sn in tin-based perovskite solar cells [14]. However, tin suffers from the notorious problem of easily being oxidized from Sn 2+ to Sn 4+ on exposure to ambient conditions [15][16][17][18]. This stability concern remains a challenge for long lasting stability of tin-based perovskite cells.

One of the most promising approachs to improve the stability of Sn-based perovskite solar cells is the addition of dopants to the tin perovskite material to enhance the homogeneous deposition and to enhance the optoelectronic properties of the absorber layer. Song et al. reported the use of an excess of SnI 2 in CsSnI 3 with a PCE of 4.81% [23]. It is demonstrated that the excess of SnI 2 was beneficial to form a uniform film and suppress Sn 4+ vacancies, thereby reducing the p-type conductivity of tin-based perovskite materials. It was also reported that the combination of SnF 2 and pyrazine solves the problem of perovskite phase aggregation and improves the oxidation resistance of the film [24][25]. In 2016, Chen et al., employed quantum rods (QR) of CsSnI 3 to enhance the PCEs of CsSnI 3 perovskite solar cells to 12.96% [26].

Low-dimensional FASnI 3 perovskite is a hot spot in current research. The added advantages of low-dimensional tin-based perovskite are its excellent stability, adjustable band gap and excellent photoelectric properties. In 2017, Liao et al., introduced phenylethyl ammonium iodide (PEAI) into a FASnI 3 perovskite. PEA could divide the body type perovskite into a 2D structure. This 2D structure was more stable than the 3D structure [27]. The change of perovskite structure with different PEAI levels is shown in Figure 1 a. The same year, Ke et al., demonstrated the addition of ethylene diammonium (en) to FASnI 3 perovskite. The 3D FASnI 3 type perovskite had an adjustable structure, mainly because {en}FASnI 3 could generate many Schottky defects in the crystal structure. Schottky defects provide to ability to change the bandgap of tin-based perovskite [28]. The crystal diagram is shown in Figure 1 b. Ran et al. , used a multi-channel diffusion two-step film formation method. In this process, phenylethyl ammonium iodide (PEAI) was evaporated to the surface of FAI and then SnI 2 is evaporated to form a 2D-3D heterojunction perovskite material. This 2D-3D structure could improve the quality and the photoelectric performance of the film. The fabricated device employing this 2D-3D tin-based perovskite structure achieved a PCE of 6.98% [29]. The 2D-3D heterojunction fabrication flow chart is shown in Figure 1 c. Ng and co-workers added PEAI and Ge in FASnI 3, where PEAI mainly plays a role of blocking water and Ge could reduce the reduce density of trap states in the perovskite [30]. The roles and positions of Ge 2+ and PEA + in perovskite crystals are shown in Figure 1 d. Wang and co-workers fabricated a 2D-quasi-2D-3D Sn perovskite film with the pseudohalogen ammonium thiocyanate (NH 4SCN). The film had good oxidation resistance that enhanced the stability of the resulting perovskite film [31]. Structure characterization of the control film and structure characterization of film with HSP (2D-quasi-2D-3D structure) are shown in Figure 1 e. 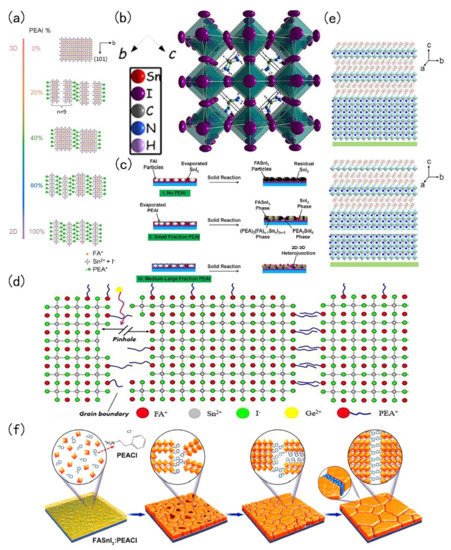 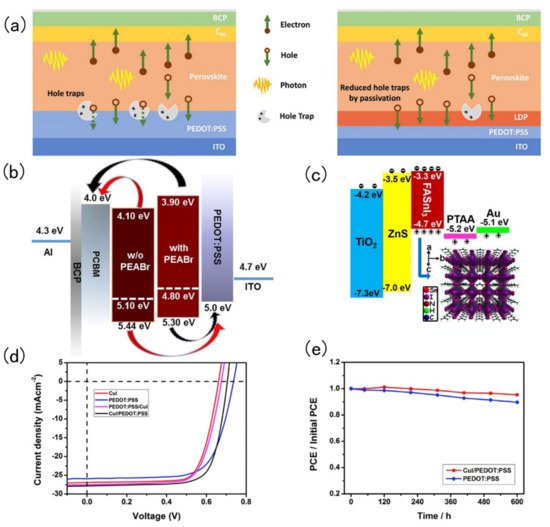 This review briefly introduces the important research progress made in improving the stability and performance of tin-based perovskites. The review focuses on role of introducing additives such as inorganic additives like SnF 2, NH 4H 2PO 2, N 2H 5Cl, organic additives, viz. ethylene diammonium diiodide (EDAI 2), 5-ammonium valeric acid iodide (5-AVAI) 3-phenyl-2-propen-1-amine (PPA) to study their effects on film properties and device performance. Low-dimensional tin-based perovskites are very mysterious to many researchers and hence it is crucial to understand their properties through in-depth research. This article introduces some tin-based perovskites such as 2D, 3D, 2D-3D, etc. 2D perovskites are more stable than 3D perovskites, but the photoelectric performance is disadvantaged, so low-dimensional perovskite may be a future research hot spot. There will always be some practical issues in the direct combination of the materials of the tin-based perovskite solar cells.