Real-time coaching programs are designed to give feedback on driving behavior to usage-based motor insurance users; they are often general purpose programs that aim to promote smooth driving.

Highway deceleration lanes and exit ramps are a relevant concern in road safety. Despite accounting for a negligible amount of total freeway mileages, they are significantly more risky than freeway mainline sections: in the United States, a National Cooperative Research Program (NCHRP) report showed an average rate of 0.68 crashes per million miles traveled by vehicles on deceleration lanes, 20% higher than that of freeway mainline sections near the exit ramp, and three times higher than that on acceleration lanes [1].
Despite this, there is a relatively small body of research on this topic, which dates back to the 1960s [2]. The vast majority of the studies focused on finding relationships between geometric/traffic features of the deceleration lanes and crash rates [3][4][5][6]. The main goal of these studies was to help practitioners to design safer infrastructures. The main geometric features that were shown to have an impact on deceleration lane safety are: deceleration lane length, deceleration lane type, and number of deceleration lanes. The conclusions from these studies were quite inconsistent; a recent meta-analysis [7] showed that, although significant risks associated with geometric features were observed in many studies, the meta-estimates were not found to be significant, suggesting the need for further research on the topic.
A different approach was applied by Calvi et al. [8], who studied the impact of traffic volume on deceleration lane safety with a driving simulator study involving 30 participants. Contrary to previous crash-based studies, the focus switched to microscopic aspects of the phenomenon, i.e., the behavior of drivers on the deceleration lane; to evaluate safety, they considered vehicle speeds, deceleration, and trajectories. The results showed a significant effect of traffic volume on vehicle speed, deceleration rate, and trajectory, and highlighted some relevant issues, such as that drivers tended to decelerate before diverging, and that speeds in the deceleration lane were significantly higher than the design speed. Subsequently, the authors applied the same driving-simulator-based approach to investigate the effect of the deceleration lane type, comparing parallel and tapered designs [9], and observed significant differences in the speeds of diverging drivers, with greater interference with the through traffic on the tapered lane. Another study focused on evaluating the effects of the number of exit lanes [10]: the two-lane exit layout seemed to provide improved performance over the single-lane one by limiting the interference of the diverging drivers with the through traffic. Their driving simulator approach was later successfully validated by comparing speed and trajectory data collected both in the field and with a simulator experiment [11]. As in the majority of studies in the literature, their declared end goal was to provide guidance for safer infrastructure design.
A driver-behavior-focused approach was followed also by Lyu et al. [12], who carried out a naturalistic experiment involving 46 participants on a typical highway deceleration lane in Wuhan. As in [8], Lyu et al. studied drivers’ speed, deceleration rate, and trajectories; in addition, they investigated vehicle lateral control during the diverging maneuver. The aim of the study was to investigate the effect of some sociodemographic characteristics (i.e., gender, occupation, experience) on drivers’ behavior, showing several significant effects. In particular, male drivers showed earlier entries into the deceleration lane in comparison with female drivers; moreover, before entering the deceleration lane, experienced and professional drivers performed the last lane change as early as possible; in addition, the vehicles’ speed while entering the exit ramp exceeded significantly the speed limit. Their approach introduced a crucial novelty to this line of research, switching the focus from infrastructural/traffic characteristics to drivers’ characteristics.
From this analysis of the literature, it is possible to observe that only a small number of studies have investigated the safety of highway deceleration lanes by focusing on the driving behavior of road users. In addition, to the best of our knowledge, none of them investigated in-vehicle countermeasures aimed at improving the safety of exiting maneuvers in highways.

The results showed that the presence of the real-time coaching program had a significant effect on participants’ driving behavior, influencing their speed, deceleration, trajectory, and lateral control.
Drivers tended, in general, to behave more cautiously in Trial 2. This was confirmed by the fact that the average speed in the highway section decreased, on average, by almost 5 km/h. The fact that the driver’s “base” speed was lower in Trial 2 implied that the speeds in the deceleration lane were also lower in that trial. For this reason, instead of investigating in absolute terms the speeds at the beginning, entry point, and end of the deceleration lane, we chose to investigate the speed-changes at those points. This allowed us to isolate the further reduction in speed that was directly caused by the real-time coaching program. This effect was significant at the entry point (ΔV2) and at the end (ΔV3) of the lane; in terms of safety, these two variables are of particular interest, as one of the main issues of deceleration lanes is that drivers tend to exceed the design speeds used to determine the length of the lane and the radius of the ramp curve [8][13][14]. As regards the speed change at the beginning of the lane (ΔV1), the effect of the feedback appeared evident only for the defensive drivers.
Since the feedback system is directly linked to drivers’ acceleration/braking, it is not surprising that participants decelerated more smoothly in Trial 2. In particular, the improvement was more evident in the maximum deceleration values than in the mean values, coherent with what was observed in the rest of the simulation path, where participants significantly reduced the number of elevated gravitational-force events [15]. Note that this reduction in the deceleration values of Trial 2 was observed despite an increase in the speed reduction, meaning that drivers decelerated with less intensity but for a longer time, i.e., in a smoother way. Smoother driving is of course desirable from a safety point of view; harsh decelerations, conversely, are dangerous because they can increase the potential for loss of vehicle control and reduce the time available for other road users to respond to the driver’s behavior [16]. In addition, it is also worth noting that this significant reduction was observed despite the maximum deceleration value being relatively low, even in Trial 1, because of the geometric characteristics of the deceleration lane. Further research can investigate how program effectiveness on deceleration variables is influenced by lane geometry.
The program had a much more limited impact on vehicles’ trajectories, as it was not found significant, except for an interaction with the factor Cluster on variable E. Therefore, on average, drivers tended to start decelerating and entering the deceleration lane at the same points in both trials. However, by analyzing individual vehicle trajectories (see Figure 1), it was possible to observe that in Trial 2 the behavior was much more consistent among the participants and that there were fewer outliers: in Trial 1 seven of seventy-four drivers entered the deceleration lane with E < 100 m, whereas in Trial 2 all of them did it with E > 100 m.
One of the most important effects of the program involved lateral control, which significantly improved in Trial 2, considering both LATACC and SDSA. To some extent, this can be observed in qualitative terms in Figure 1, where the trajectories in Trial 2 showed generally fewer oscillations. This, again, represents a further positive effect on road safety. 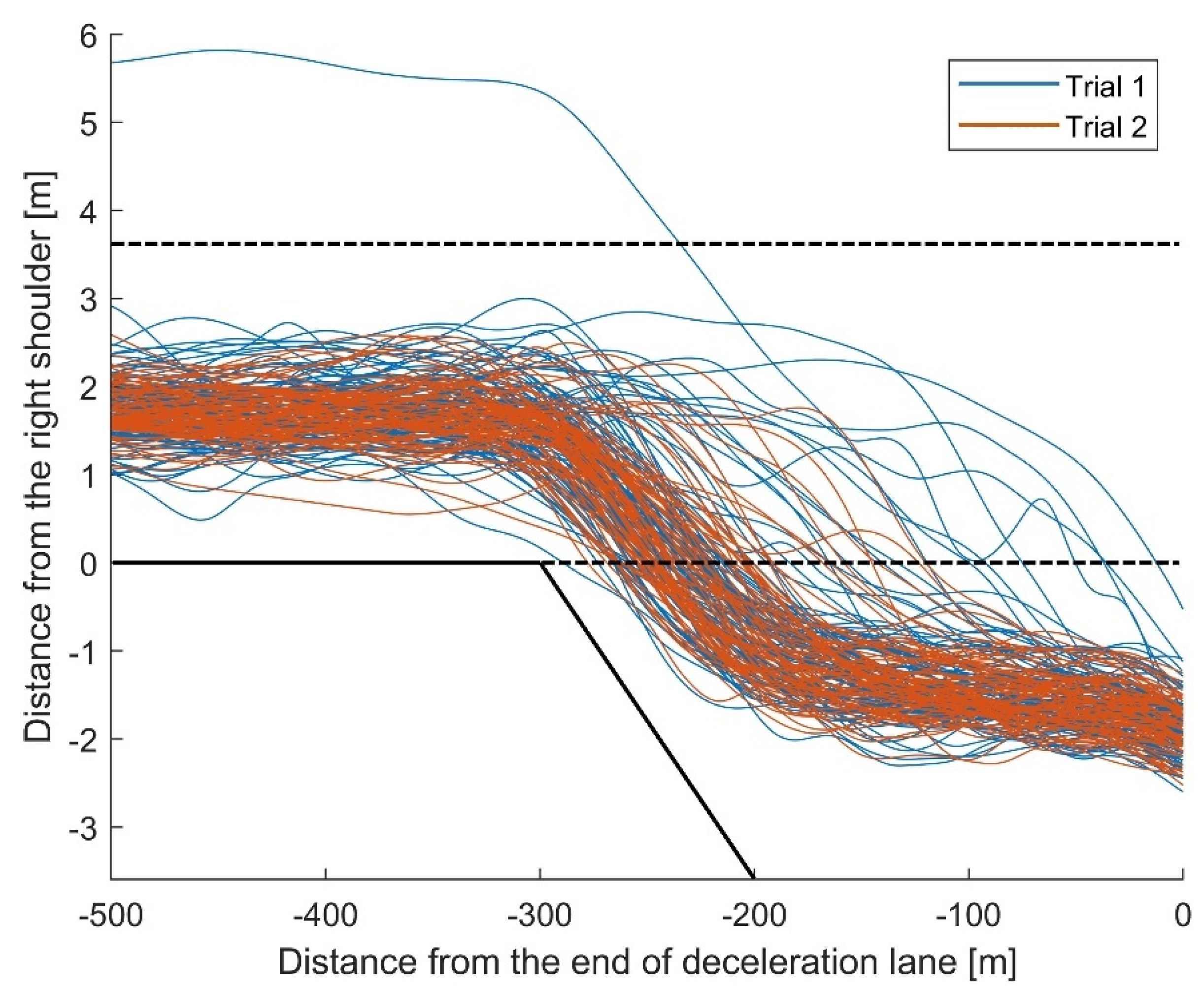 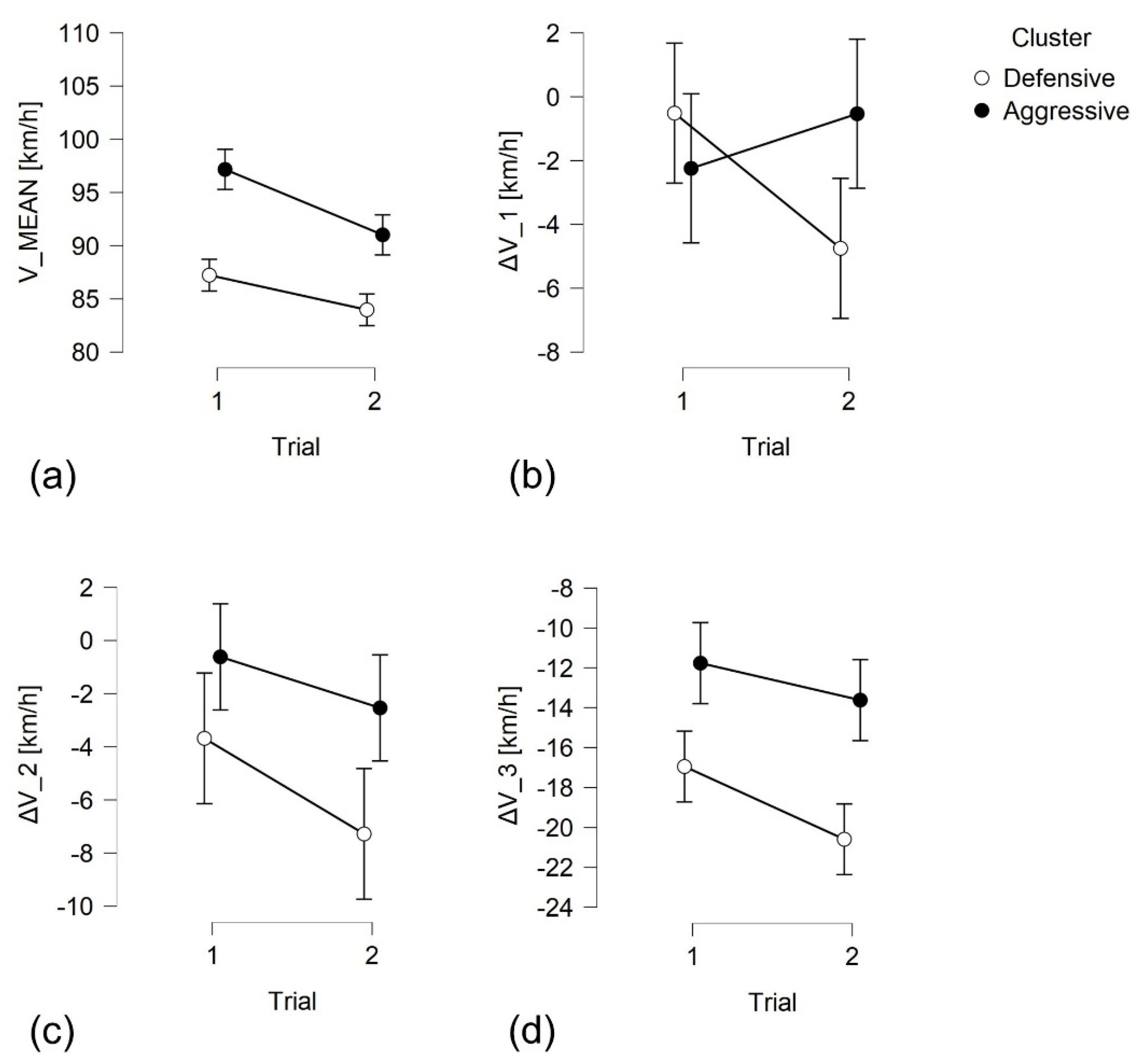 2.3. Effect of Feedback Modality and Variance on Program Effectiveness

It has been suggested in the literature that multimodal feedbacks are more effective than either visual or auditory feedbacks, whereas, considering the two modes separately, results are not conclusive [19][20][21]. For this reason, Feedback Modality variable was included in the experimental design. The results of the present study did not show significant differences between auditory and visual modalities, with the notable exception of lateral control, where the visual feedback produced an improvement in performance and the auditory did not. However， as can be observed in Figure 4, this may have been caused by a random difference in the two groups in Trial 1, combined with a ceiling effect, which prevented the participants in the auditory feedback group to improve their performance in the second trial.
Feedback valence (positive or negative) did not show any significant effect on most of the dependent variables, as observed in previous studies on this driving simulator experiment [15][17]. This is in contrast with the findings of Harbeck et al. [22], who suggested that rewards have greater impact on behavioral changes, especially for young drivers. It is however possible that in the present study there was a ceiling effect, caused by the attributes of the feedback sounds: their symbolic meaning may have amplified their effect, disguising differences in their impacts. For one variable, DEC_MAX, a significant interaction between Feedback valence and Trial was found, as only participants who received a negative feedback were able to improve their performance in Trial 2. However, as in the case of the feedback modality effect on lateral control discussed above, this may be explained, at least in part, by a random difference in the two groups in Trial 1 (Figure 5b). Further research is required to confirm these findings.

We investigated the impact of a motor insurance real-time coaching program on drivers’ behavior on highway deceleration lanes. Data were collected with a driving simulator experiment, and the analyses involved several kinematic variables.
The main result is that the tested real-time coaching programs were able to significantly improve the safety of the exit maneuver from the highway, with participants reducing their speed both approaching and using the deceleration lane, decelerating more smoothly and with higher lateral control. This also allowed some drivers, characterized by a “defensive” driving style, to modify their exit strategy by entering the deceleration lane before starting the deceleration, instead of doing the opposite (which is both a safety and an operational issue). Finally, no significant effect of feedback modality and valence was observed on most of the investigated variables.
These results have a potentially relevant practical interest because they suggest that it is possible to improve driving behavior with a very simple general purpose feedback system that depends only on a fixed acceleration/deceleration threshold. They also suggest that developing real-time coaching systems, primarily aimed at increasing the smoothness of driving style, could also produce additional benefits in specific and seemingly unrelated situations, as also shown in previous works [17].