Minimal tillage is a tillage method that does not use a plow, reduces the tillage procedure to the necessary for crop production without destroying the soil structure at the proper time, and greatly reducing soil wind and water erosion, which mainly includes subsoiling and topsoil tillage and other tillage techniques.

Minimal tillage is a tillage method that does not use a plow, reduces the tillage procedure to the necessary for crop production without destroying the soil structure at the proper time, and greatly reducing soil wind and water erosion [1], which mainly includes subsoiling and topsoil tillage and other tillage techniques. China’s farmland is facing severe problems of soil compaction and soil and water erosion. The processes of farmland ecosystem are affected by climate change under the mediating effect of soil conditions [2]. As an essential form of conservation tillage, minimal tillage has been highly valued and widely applied.
The technical requirements of subsoiling operation are to break the plow pan layer and obtain good disturbance of the soil. On the other hand, the technical requirements of topsoil cultivation are soil loosening and surface leveling. The upward movement of the plow pan layer was caused by continuous topsoil cultivation [3]. Domestic studies show that a subsoiling operation should be carried out after 2–3 years of topsoil cultivation [4,5]. Currently, the domestic research on the minimal tillage methods includes the research on resistance reduction and abrasion resistance performance of subsoiling shovel, the research on application benefits of tillage technology and the supporting tillage technology system.
Based on the analysis of domestic adaption of minimum tillage, this paper introduced the technology mode and effect of cultivation, expounded the research advances and problems in the subsoiling and topsoil tillage machines; finally, the development trend of minimal tillage in China has prospected, to form the matching technology system of minimum tillage in northern and southern regions, further application and promotion of minimal tillage in China.

Minimal tillage is mainly based on the principle of reducing soil tillage. A set of a farming system suitable for local conditions is formulated according to the combination of agricultural machinery and agronomy technology in different regions. At present, the research on minimal tillage mainly focuses on subsoiling and topsoil tillage in China.
The implementation of rural land circulation policy, subsoiling subsidy policy and agricultural machinery purchase subsidy policy, and the increase of large and medium-sized tractors, causing severe soil compaction problems by tractor tires and machinery and hindering the sustainable development of agriculture [6,7]. In order to restore the soil bulk density compacted by machine and naturally compacted, break the plow pan layer, ensure proper drainage, improve the soil water retention rate and meet the needs of crop growth, China began to study the technology of subsoiling in the 1960s [8]. Under the condition of straw mulch and uneven land surface, it is challenging to solve low seeding quality only by improving machinery, but topsoil tillage can better solve this problem. Typical technology patterns of minimal tillage are shown in Table 1.
Table 1. Typical technology model of minimal tillage.
The application of minimal tillage methods has been gradually attracted attention which it improved the soil’s physical and chemical properties and improved crop yields in China. The model of appropriate technology has been formed in different regions for different ecological environments and crop species. In addition, the typical tillage treatments and the effect of each area in China are shown in Table 2.
Table 2. Typical tillage treatments and the effect of each area in China.
In recent years, the research on minimal tillage methods and their matching technology has increased by domestic research institutions, each region matching technology model has been gradually established. Summarize the development trend of minimal tillage methods in recent years in China: (1) Pay attention to the role of subsoiling to break the plow pan layer and topsoil tillage to level the surface and control weeds. (2) Pay attention to the remarkable effect of combining deep pine and topsoil tillage with building a reasonable arable layer. (3) The application scope gradually increases.

The subsoiler is the tool to realize the subsoiling operation, and the rotary tiller is the representative machine for surface soil cultivation.
According to the statistics of the Department of Agricultural Mechanization Management of the Ministry of Agriculture and Rural Affairs, China has organized and completed the subsoiling and land preparation of agricultural machinery 155 million mu, and the quantity of subsoiler is increasing year by year, indicating that China’s attention to the subsoiling and land preparation is gradually increasing. The area of subsoiling reached the highest level in 2015 and maintained a relatively stable trend in other years (as shown in Figure 1), which may be because subsoiling occurs every two to three years in China. 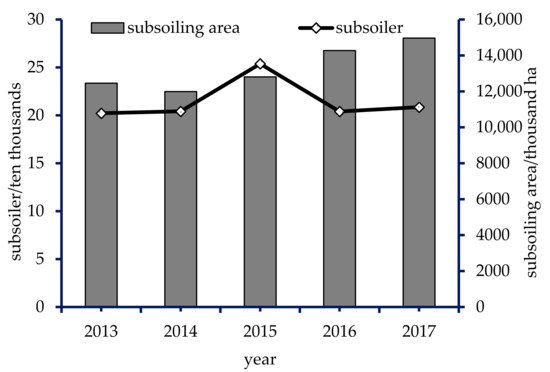 Figure 1. Diagrams of changes of subsoiler ownership and subsoiling area from 2013 to 2017. (Interpretation of national agricultural mechanization statistics annual report in 2013–2017).
As shown in Figure 2, the ownership scale for small tractors (≤14.7 kW) in China decrease constantly, while the ownership scale for large and medium-sized tractors (≥ 14.7 kW) increases year by year, the elimination of small tractors is accelerated and the rapid growth of large and medium-sized tractors shows the trend of large scale gradually. The number of rotary tillers is increasing year by year. In the next few years, the rotary tiller will still be a representative machine for topsoil tillage. 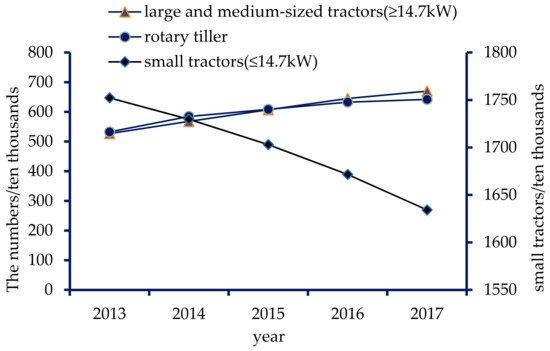 Figure 2. Diagrams of changes in the ownership of small, large and medium-sized tractors and rotary tillers (Interpretation of national agricultural mechanization statistics annual report in 2013–2017).

3. Current Status of Key Techniques and Tools for Minimal Tillage

Topsoil tillage mainly includes disk harrowing, surface loosing, vertical tillage, etc. The commonly used machines for tillage are disc harrow, tooth harrow, shallow loosening machine, etc. [66]. Some machines for topsoil tillage are discussed in Table 5.
Table 5. Typical machines for topsoil tillage.
The disc harrow is mainly used for breaking and leveling soil after plowing. It is generally composed of a harrowing group, harrow(rake) frame, suspension frame and adjustable angle mechanism. Disc harrow can cut up the straw on the ground to realize the complete mixing of the surface straw and soil, which is beneficial to the degradation of straw. At the same time, it can also arrange a flat and uniform seedbed. The critical component of the disc harrow is the rake plate, divided into full-edge and notched disks according to the shape of the rake plate, passive and driven disks according to the driving mode. Due to the severe soil hardening, large rice straws and fluctuating soil moisture content in paddy field soil in southern China, Wan et al. [67] designed a hydraulic-driven disc harrow (Figure 3) to enhance the ability to cut straw and soil. Xu et al. [68] developed a new model as-cast bainitic steel, which improved the characteristics of a harrow disk and simplified the process of production. In addition, the wear resistance of the steel is better than that of 65Mn steel after heat treatment. 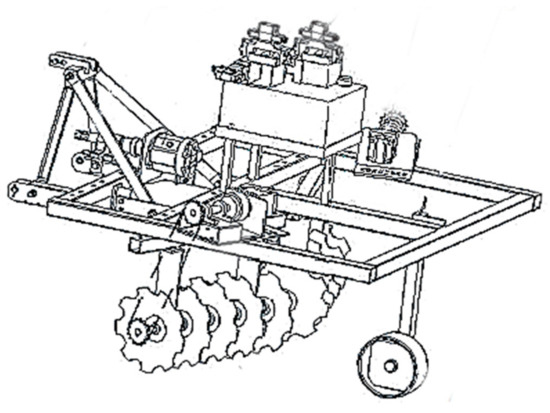 Figure 3. Hydraulic-driven disc harrow structure drawing.
The operation mode of the vertical shaft driving is adopted for the vertical driving-type tillage machine. The power is transferred to the shallow-rotation driving blade by the tractor, which drives the shallow-rotation driving blade group to rotate at high speed to disturb and break the soil to soil preparation. Thus, good transmission performance, suitable for high-power wide-width operation, good consistency of operation depth, the upper and lower soil cannot be disturbed, good moisture retention. Aiming at the characteristics of less tillage in conservation tillage, high quality of surface flatness and high requirements on surface soil erosion during tillage in the Huang-Huai-Hai area of China, Wang et al. [69] designed a vertical drive-type surface tillage machine (Figure 4), which met the requirements of soil crushing and straw mulching [70].

Figure 4. Vertical drive-type surface tillage machine.
A surface cultivator is a loosening machine whose depth of soil is not more than the ploughing layer. It is generally composed of a surface shovel, rotary blade and surface tillage blade. The rotary blade has the best effect on soil leveling, but the soil disturbance is significant. The chemical and mechanical combined treatment had been used, Hu et al. [71] designed a sprayer-cultivator-combined weeder for permanent raised bed system, the weeding rate was 97.3%. In order to achieve surface tillage and weeding under a large amount of straw mulching, Wang et al. [72] designed a double-vane symmetrical rotary blade with the functions of chopping and sliding cutting. The results showed that the crumbling and weeding ability had an advantage over the topsoil shovel and the condition of soil disturbance, and straw mulching is better than that of the rotary blade. Yang et al. [73] designed a surface tillage blade with the reciprocating plug of soil (Figure 5). When the cut soil distance of the cutting tool is less than 30 mm, the broken soil coefficient of soil is more than 90% after topsoil cultivation, and soil bulk density is less than 1.22 g/cm3. 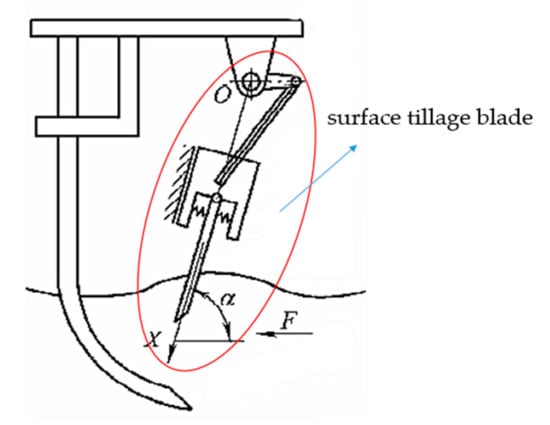 Figure 5. Surface tillage blade structure drawing.
Vertical tillage is a type of tillage in which the soil is sheared vertically without causing horizontal disturbance to break down the hardened layer and prevent new hardening. The disc cutter and disc harrow are the key parts of vertical cultivation in China. The disc cutter cuts up the stubble while rolling and crushing the soil, which promotes the mixture of straw and soil, accelerates the decomposition, increases the soil fertility and is conducive to the germination and emergence of seeds. The finely crushed straw can also reduce clogging and improve the trafficability of the no/minimum tillage planter [66]. Wei of Guangxi Academy of Agricultural Sciences first proposed the technology of smash-ridging in 2008 [74], using a special mechanical vertical spiral drill to grind the soil vertically and naturally suspend it into ridges [75]. At present, experiments have been carried out on corn, peanut, sugar cane, potato, rice and other crops, and the root developed markedly. Yield has been increased [75,76,77,78,79].